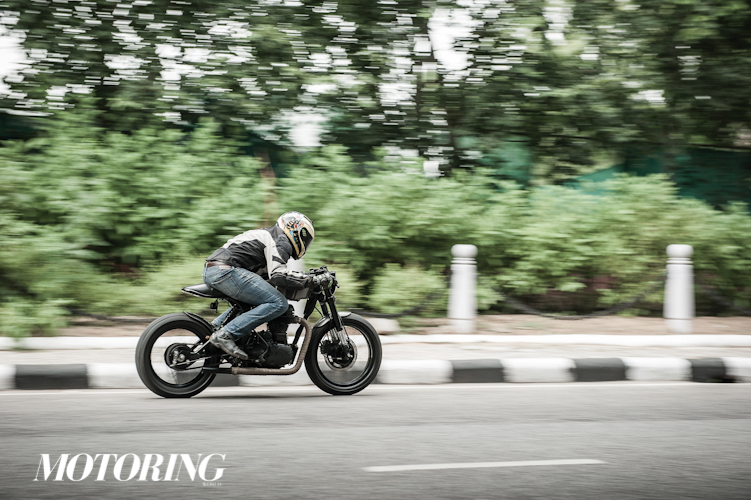 It’s been a long time since I rode a genuinely Indian motorcycle. Something that took pride in being Indian; a motorcycle that didn’t insist on ‘German engineering’ or ‘European styling’ to ring in the registers. Being Indian is a matter of pride, after all. Yes, it’s absolute chaos out there and things are far from ideal, but in a world that’s increasingly entangled in conforming to the West, it’s good to have someone like Vijay Singh Ajairajpura around. And what better a way to be around than to build motorcycles?

You’ve seen him on these pages before, thanks to his brand of custom motorcycles – Rajputana Customs. The name itself is an ode to the Rajasthan of yore, its soul continuing to shine brightly thanks to the bravery, ambition, resilience and vision of its bearers, the Rajputs. It is a matter of no surprise, then, that Rajputana Customs accelerated to the world map before any other Indian custom motorcycle brand could. Rather than being influenced by the West, it made an impact on it instead. A few neatly arranged, ready-to-be-shipped, motorcycles at the RC workshop in Jaipur are testimony to this.

We catch Vijay on a busy day, but he’s a natural at playing host. Motorcycles have to be built and deadlines have to be kept, I suppose. We wander around in his fabrication bay, trying to soak in the busy atmosphere from behind the lens. There are all kinds of motorcycles, from one of his early Royal Enfield-based bobbers to a nearly complete Harley-Davidson and even, oddly, a Honda CBR600RR with race bodywork. A bunch of men work in perfect synchronisation on a Bullet 500, taking measurements and analysing mounting points. Each one of them seems sure of the brief and when not, Vijay is quick to swoop in and assist.

‘You can take this one out if you like, but why don’t you try out the café racer? It’s fun!’ quips Vijay, diverting my attention from one of his more traditional chopper builds to a discreet café racer parked in a corner. One look at it and I don’t need any more convincing. It’s hard to get a café racer wrong, but this one’s simply irresistible! The recipe is simple – take a Bullet 500, shed weight off it, keep it minimal and paint it right – but this one’s got a visual quality to it which shines through even if you so much as look in its direction from a few feet away.

It’s called Siyaar, the etymology coming from the Hindi name for ‘jackal’ — a clever little animal that’s quick on its feet — and also from the fact that CR (for café racer) sounds much the same. The fuel tank, which started life on a Yamaha RX, is perfectly chiselled and looks menacing in that shade of gunmetal grey, offset with a black stripe. That, in fact, is the only substantial bit of bodywork on this motorcycle — everything else is down to the bare essentials. The KTM-sourced front end is one of the best in the business but here, it adds to the visual proportions just as well. Everything, from the headlight to the KTM RC clip-ons, the wire spoke wheels to the beautifully handcrafted single seat, seems just perfect.

I swing a leg over without further delay and am immediately set into an aggressive riding position. The clip-ons droop just the right amount, my knees slotting into the recesses on the fuel tank comfortably and the rear-set footpegs prepping me up for what is going to be one treat of a ride. An electric starter brings it to life and — whoa! — it’s loud. Okay, so it’s not eardrum-shattering or anything, but hey, this is what all good Bullet 500s should sound like. A snick into first and I let the clutch out gently and the Siyaar shows the first signs of its true identity. It’s quick off the line.

Finding it very hard to resist, I open up the throttle, alerting a few policemen that stand guard outside the CM’s residence. I don’t want to be arrested, but they’re too busy ogling at the bike to mind, so it’s all good. This is fun. It shifts up the gears like no other factory-spec Bullet I’ve ever ridden and accelerates like none other, too. Before I realise it, I’m past 100 kph or at least what feels like a 100 – there’s no speedometer. An ample roundabout is a few metres away and all I have to do is shed some speed and flick the bike over. No drama. It just does what it has to.

This is getting addictive already, as I can tell by my itching throttle hand. I’m far away from the highway, but being a café racer, Jaipur’s finest in-roads are perhaps a justifiable setting to try it out. The Siyaar seems only too willing and thereafter, it’s an hour or so of making an absolute racket up and down the city’s most prominent roads. It accelerates hard up the gears, the clip-ons providing terrific feedback and control all the while, and when it’s time to brake, the Siyaar plunges down on its front fork with immense poise. Not only does it feel quick and agile, it never once feels like it was built outside of a production facility by hand mostly.

The cops have finally had enough by now or maybe they’re just bored because I haven’t pulled any wheelies yet. But flag me down, they do, and ask me to stop being a menace, not before they can pose for a few pictures with it, though. Still not being arrested – good thing, that. As I’m let off, I do pull a small wheelie and give the throttle one hard twist. I’m not sure the cops enjoyed it, but that’s the thing about all good café racers. They’re meant to be rebellious. Thanks for having us over, Vijay, and I’m sorry if the cops came  knocking later! M

Like it? You can have one, too! Vijay at Rajputana Customs is the man to trust with your dream project and you can ring him on +91 9928164795. Thanks for letting us have the honour of naming it, by the way!