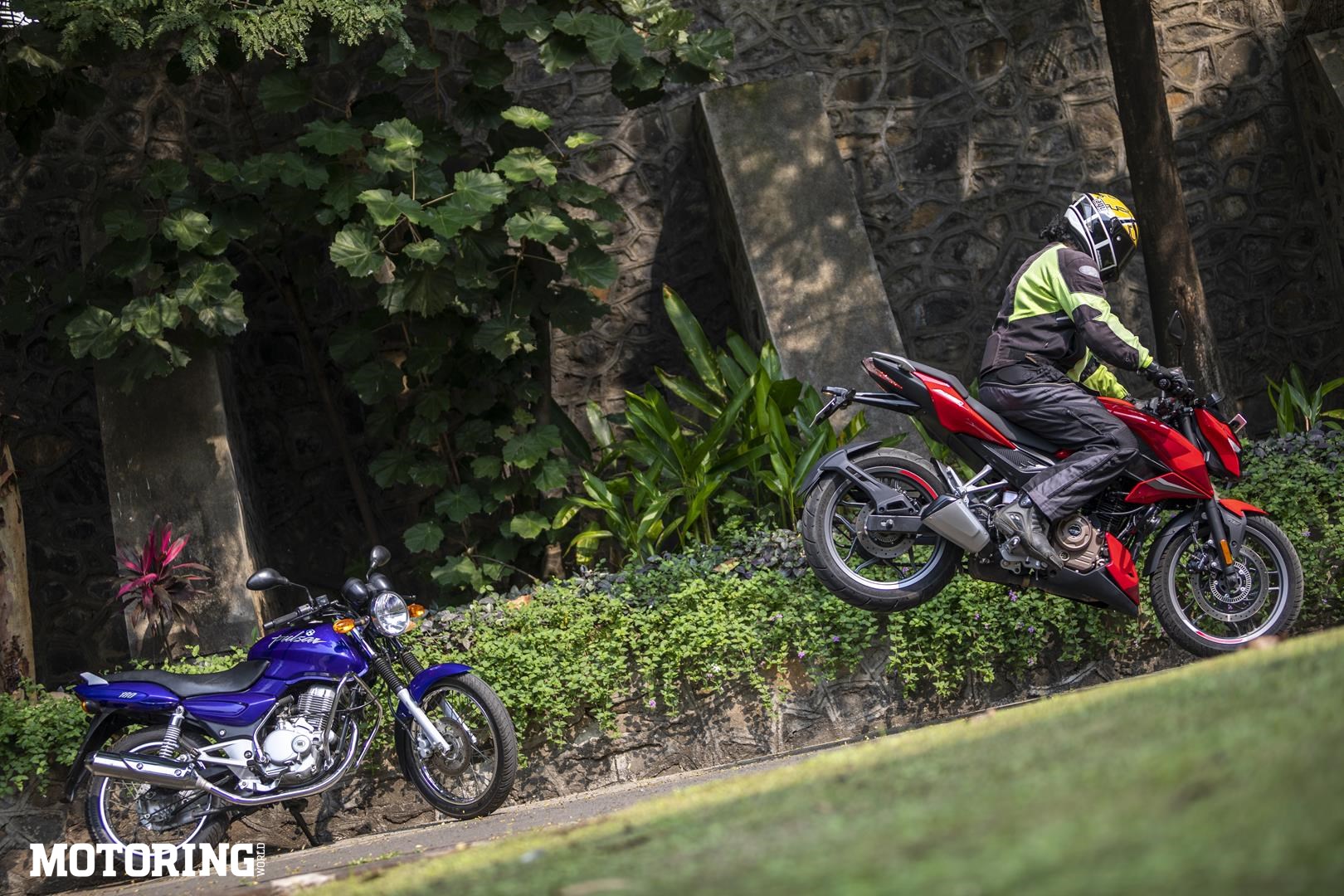 The two Pulsars stood side by side, their motors idling in unison. Their reverberations infused the air with a sporty beat, and it was incredible to note how the original and the latest motorcycles sounded so similar. That’s when I knew for sure the Pulsar spirit pioneered by the 180 was truly alive again in the N250, enough for a cheesy reincarnation reference. And I couldn’t be happier. You see, the Pulsar 180 was my first bike and I learnt life on it. And when I was handed the key to this beautiful one that lives at Bajaj’s Akurdi facility, memories from 20 years ago came flooding back. The 180 will always be the reason why I keep falling in love with motorcycles again and again.

What makes a Pulsar a Pulsar? For me, it was always all about solid and clean shapes, a torquey motor, a flickable short wheelbase, and fun down to the bones. I just defined the Pulsar 180 there, and I can imagine how difficult it might have been for Bajaj engineers to take all those attributes and mix them with the dreary demons… er, demands of ‘customer insights’. I looked at the company’s first 100/90 rear tyre on the 180, the very same that my youth once pushed its luck on, and wondered if market surveys could ever match original out-of-the-box ideas. That’s what Pulsars after the first one were missing, in my opinion. And my bias is only as real and deep as the Pulsar 180’s character. 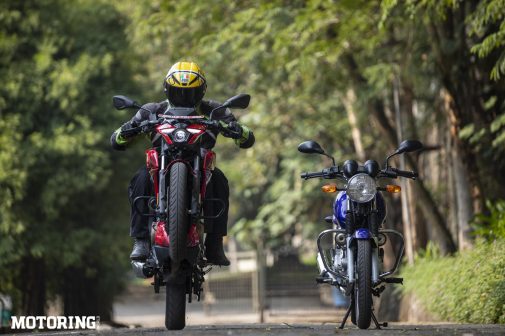 I wish Bajaj comes out with a Pulsar Classic, simply replacing the N250’s body with the old one’s. I promise you I’ll be the first one at the nearest Bajaj showroom. But why am I saying this? Um, because both objectively and subjectively, the 180 still looked brilliant, while the N250 could be a bike from any other manufacturer. The morning sunshine that fell on the 180 highlighted its delightful blend of cohesive design and attention to detail. There was a handsome clarity in its lines, while the N250 seemed to suffer from some kind of modern anonymity. To be fair, it looked all right in isolation, but just not special enough. Or perhaps the 180 was just impossible to live up to.

The years have done nothing to diminish the 180’s aesthetic appeal. Leaned on its side stand with its handlebar turned to the right, it still showed why Bajaj ran that first ‘definitely male’ campaign that’d certainly provoke more than a few disapproving howls today. In the same pose, the N250 shows off its lineage as well, bringing that front-heavy posture for the 21st century. A Pulsar has no choice but to nail this stance, after all. And with all due respect to other Pulsars, past and present, thanks to my relationship with the 180 I believe a Pulsar must only be a naked motorcycle. Viewed at that angle, I thought I felt the N250 growing on me the more time I spent around it.

But nothing in sight could beat the 180’s sculpted fuel tank and engine. I ran my hand along those familiar lines, stirring old muscle memories to life. The twin-pod meters that I once chased speed with. The quirky ‘friction-based steering damper’ that did nothing of the sort but certainly made steering heavier than necessary. The side panels shaped like the infinity symbol ending in the simple but classy tail-lamp. Heck, even the teardrop-shaped rearview mirrors made me go misty-eyed. However, one look at the N250’s modern cycle parts, and I immediately wished I could go back in time and smack my younger self for doing all those stupid things on the 180. I could’ve avoided a lot of pain and trouble if I’d had the new one’s accomplished dynamics back in the day. 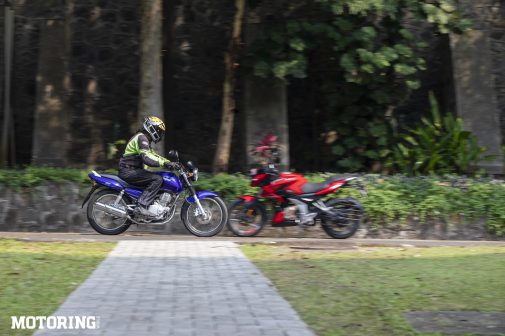 Viewed next to each other, the N250 showed how the parts game has moved on. Everything looked substantial and sporty, and with cold logic replacing the sepia tint the 180 seemed decidedly inadequate. It’s amazing what today’s motorcycles have become, and I don’t think I pay enough attention to that fact. Right from the alloy wheels and super-grippy tyres, all the way to the digital instrumentation and LED lights, the N250 speared each box on the equipment list. This is where the N250 started coming into its own. And that’s when the Pulsar 180 fired up, and all thoughts about other motorcycles vanished from my head.

Even after all these years, the 180 sounded just as glorious and up for a good time as ever. Every blip of the throttle produced the symphony that’s seared into my mind — the primary gear’s whine and the exhaust’s thumpy beat. It was impossible not to grin fondly at the motor’s enthusiasm. With my inner teenager wide awake, I added some 7-8 km to the 180’s odometer without leaving the Akurdi premises, reliving the mayhem from 20 years ago.

I remembered the feeler bolts grounding without a care in the world, trying to replicate all those photos from automotive magazines. The wheelies, glorious ones as well as the disasters. The stoppies which were fortunately always landed how they should be. Feeling the big tank between my thighs and watching those orange needles sweep angrily across the meters’ faces. Simple thrills from a simpler time. The 180 still felt as unburstable as it did all that time ago. And the N250 simply elevates what the Pulsar has always done to the next level. 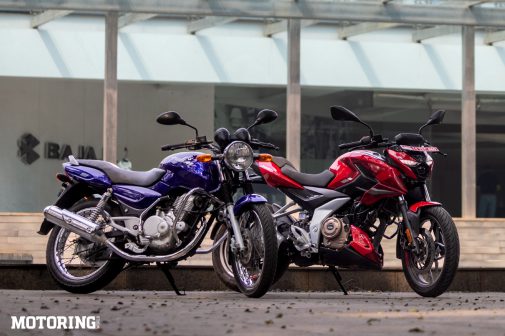 The newest Pulsar is a lot like the oldest one in the best of ways. Even with the memories of my younger days standing before me, the N250’s deep exhaust sound did enough to attract me. And it’s up for pretty much everything its ancestor did — only, everything happens faster and harder. The N250 wheelies with magnificent exuberance, showing off its low-rev grunt. It turns corners into sporting events, ever ready to demolish knee sliders. And it handles speed with a poise and finesse that the 180 can only be proud of. Long story short, the N250 delivers where it matters the most — fun. Bringing these two together only cemented what I’d learnt when I first rode the N250 — newer generations of riders will finally know what it’s like to ride a proper Pulsar.

It’s difficult to encapsulate what the Pulsar has done for fun biking in India; it just means so many things to so many riders. It’s a proper do-it-all machine that never stops being fun. It has given us thrills while hiding in plain sight. Much has happened in the past 20 years, both with the Pulsar and myself. Somewhere along the way, I also learnt that a pulsar is a type of star that produces radio waves and electromagnetic radiation in rapid pulses, and that most of us have been pronouncing the bike’s name wrongly. As I gazed at the Pulsar 180, I realised that the game may have moved on, but players will always remain players, in memories as well as on the road. And that I must track down my old silver 180 and bring it back home as soon as possible.