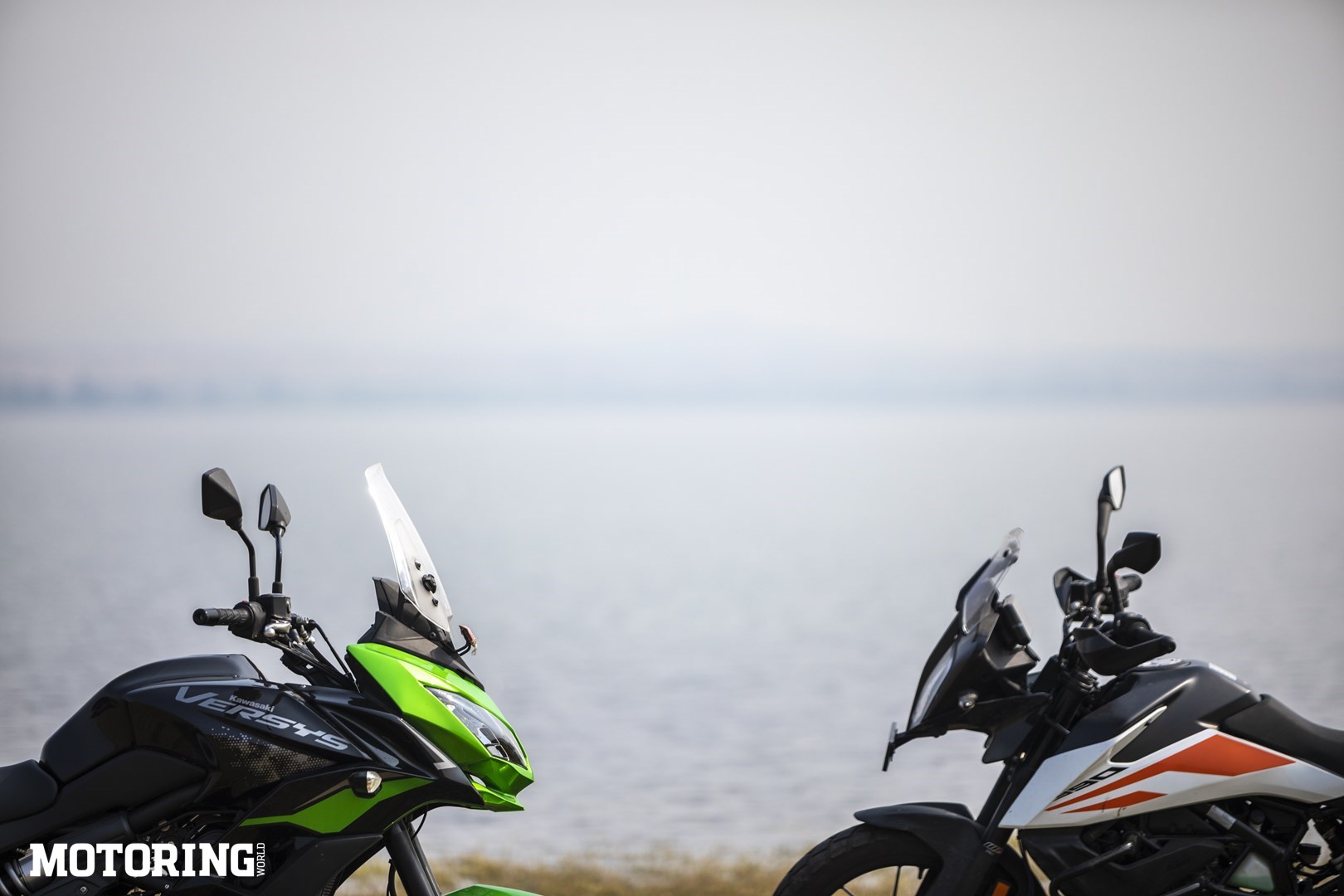 This is nowhere close to a serious comparison, and it can never be. But that didn’t stop us from putting these two bikes together. The first question is, why would anyone compare a KTM 390 Adventure with a Kawasaki Versys 650? After all, the only thread that connects these bikes is that they are both adventure tourers. Besides that, they are poles apart in almost every other aspect. However, both are also derivatives of fantastic motorcycles that existed prior to each of these; the 390 Adventure comes from the 390 Duke, a fast and agile motorcycle that has gained a cult following, and the Versys shares its underpinnings with the Ninja 650.

Even globally today, these motorcycles are some of the best machines to consider in the middleweight segment. Now, coming back to the bikes in question here, their functions are essentially the same but the approach they take is radically different. Yes, the Kawasaki costs more than twice, but how much of that added price is justified for someone to consider the Japanese machine over the Austrian? Or does the KTM prove to be a giant-killer yet again? After all, this world may not always be an ideal place, but it does allow us to delve into things that really matter rather than fixating on those in plain sight.

Surprisingly, it’s the KTM that is more modern and heavily feature-packed here, which is a crucial aspect for buyers today. In Kawasaki’s defence, for the green that you spend, you get an extra cylinder and 22 bhp/2.45 kgm more. You also get bigger and better brakes, more fuel capacity, comfort and space. The Versys 650 also has more premium and sophisticated cycle parts. So, it can be as simple as, the more you pay, the more you get, and that can be the end of it. But that’s not all.

On board the 390 Adventure, I may not be in the most comfortable place physically, but in my mind, I am at absolute peace. Quite ironic to say that about a motorcycle with a motor known for its hooligan nature and full-throttle power. What I mean is, compared to the Versys 650, I have far fewer things to deal with. First is the size, the 390 Adventure is smaller than the Versys which makes it far more nimble and easy to manoeuvre through traffic or tight situations. Next are the weight and seat height; I am about 5’ 6” and weigh about 70 kg, and the 390 Adventure is a lot easier to push around and reverse out of a parking spot. It doesn’t demand a lot from me when it comes to physically handling the motorcycle. It’s also better when it comes to being a bit easy on caring for the bike to enjoy its true potential. So, is it all good with the 390 Adventure? Not quite.

No matter how good the 390 Adventure is, it is still a KTM, and KTMs are built for performance with comfort taking the back seat almost every time. And here, we are dealing with spending time on that saddle, touring for long hours. Many a time, you’re on the saddle even before the sun rises until it is about to set. For that kind of riding, the 390 Adventure can get quite exhausting. Being a single-cylinder mill with a high-power output, the inherent vibrations, despite any amount of damping involved, will migrate to the ’pegs, the seat and the handlebar. These, coupled with long hours of saddle time are prone to induce fatigue earlier.

Furthermore, the WP-sourced suspension on the 390 Adventure is fundamentally stiff, which results in transferring a considerable chunk of the movements caused by the bumps, cuts and terrain directly to the rider. It is not a big deal when the ride is about two to three hours, but for a whole day on that bike, the body can get pretty exhausted.

On the Versys, the dynamics are quite different, altering how you approach this motorcycle. For me, my biggest concerns were the weight and seat height. Besides that, I don’t see any reason why I could not buy the Versys over the 390 Adventure. The Kawasaki weighs 218 kg which is a good 41 kg more than the KTM, and is a lot of extra weight when it comes to slow-speed riding. Keeping the weight on the two wheels becomes the highest priority, and you don’t want to scratch the beautiful paint on those expensive body panels, right? That said, when the road is uneven or there is a sudden change in direction or inclination, the lack of a firm footing only adds to the whole ordeal.

But, you’ll only spend a fraction of your time on the bike at slow speeds compared to the time spent cruising in higher gears. And for that experience, the mentioned limitations can be overcome with better skills and some precaution. Once shifted past the second cog, the Versys got as comfortable as sitting on an armchair. No part of my body was under stress, and the generously wide and well-cushioned seat lets you move around with multiple combinations to keep on riding with ease. 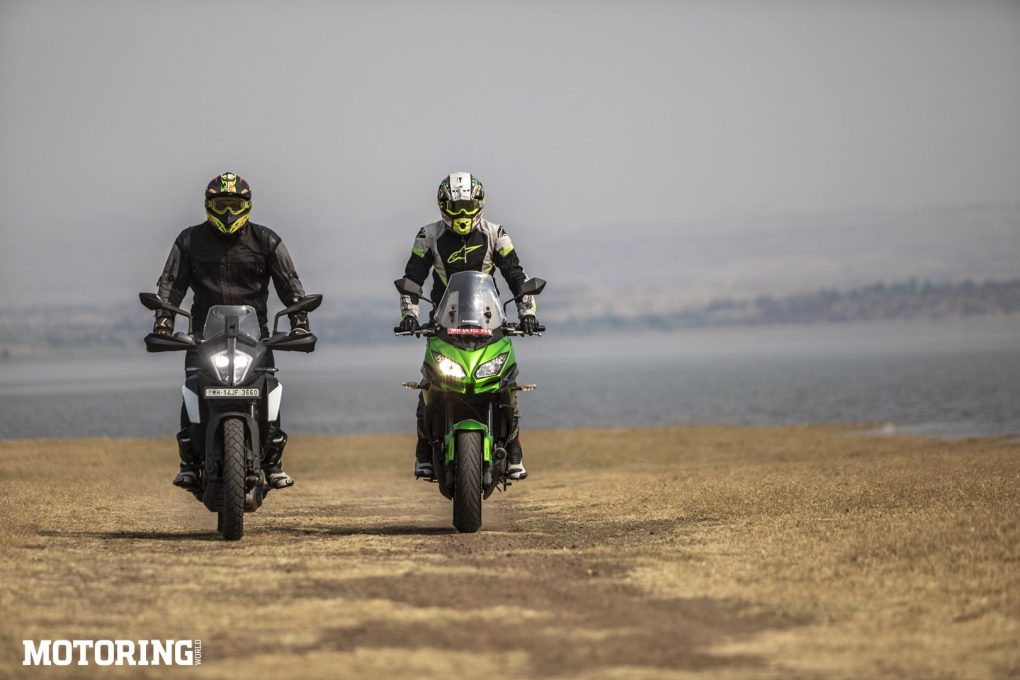 Rather than urging me to chase the sun, the Versys kept me in a state of zen that let me become a part of the journey rather than just being a passenger. At similar cruising speeds as the KTM’s, the parallel-twin motor was a whole lot more composed and relaxed, with ample revs left at my disposal. Also, the engine doesn’t ask for gear changes often. There is a heavy slab of torque that floats around the mid-range that allows one to pull through most situations with a slight twist of the right wrist. It’s also got a very good suspension package designed for the job at hand and brakes that shed speed like no one’s business.

After hours spent on either motorcycle, a different picture is painted that dictates a winner and a loser among both the machines. The KTM is a motorcycle that compels you to commit to riding faster overall. It is a machine that favours the young, someone who likes to live closer to the edge and is physically able to sustain the compromise that the motorcycle represents. As for the Versys 650, it is pretty much the opposite. It is more like a paradigm shift in perspective to a more relaxed and comfortable nature. 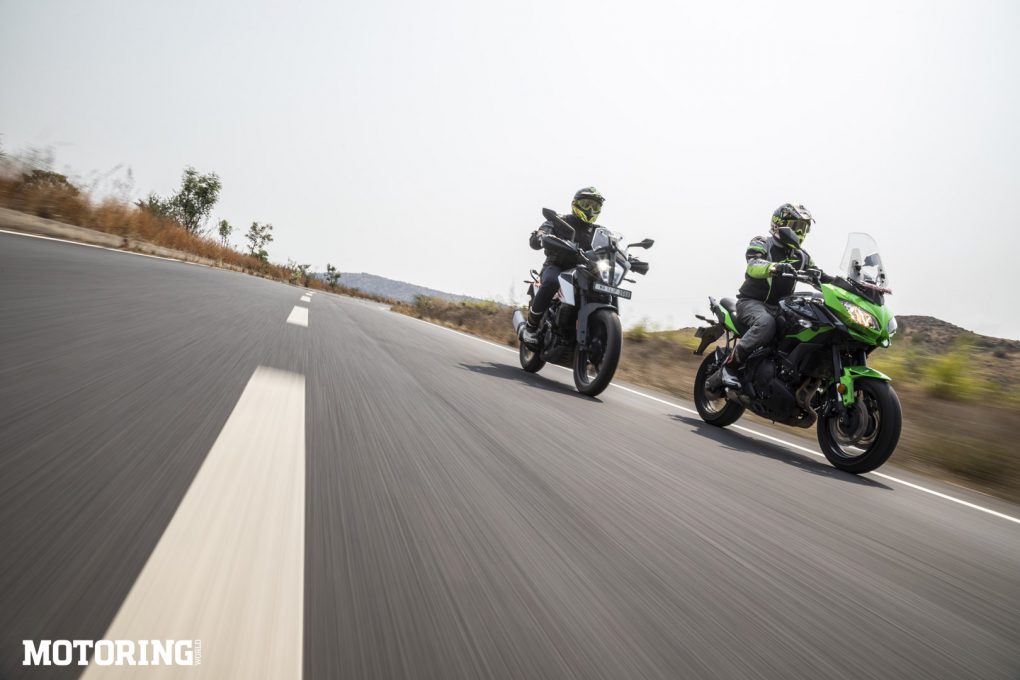 In all fairness, it is like a coming of-age motorcycle thing, where the 390 Adventure is what you will prefer when you are young. The Kawasaki is for when you hit your thirties, or when the thirties hit you? Without a doubt, the KTM will also get you from one place to another, but the Versys will take you from one to another and then another after that. It is a matter of perspective and perhaps a question of how grey your head is. Makes sense now, no?