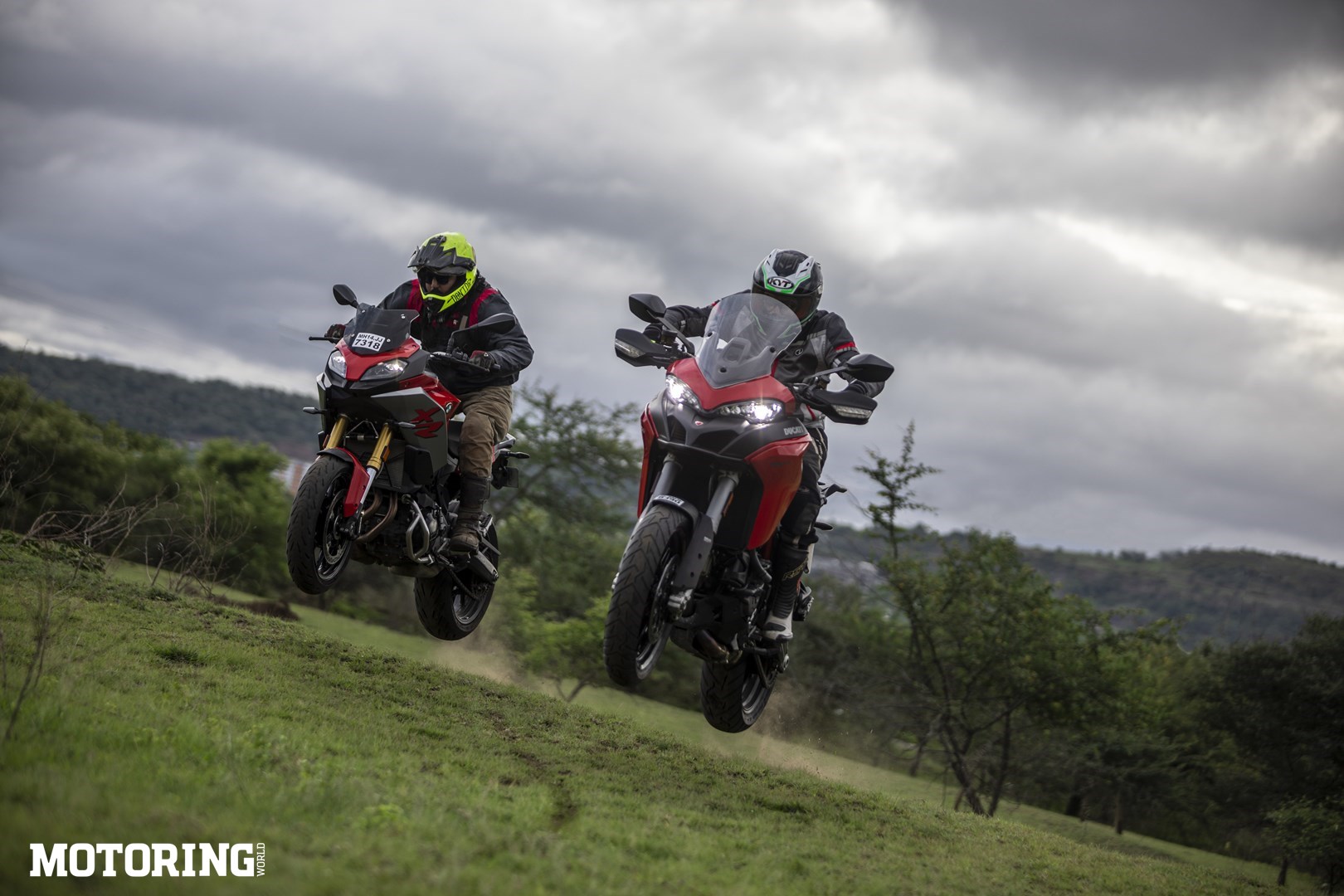 Only a few feet ahead of me is Varad astride the BMW F 900 XR. We’re in the twisties of Lavasa, going as fast as we can. I am all ducked down and leaning into corners on the Ducati Multistrada 950S to the best of my abilities. There is a constant temptation to open the throttle more and brake a little later to bridge the gap, but in these hairpins it has to come with precision and commitment, and I am aware that my competition is strong. The plan, then, is to wait for an open patch, pin the throttle wide open, and then dive hard on the front brakes to get ahead. Apt, for a pair of bikes that are middleweight competitors in the sports-touring world. 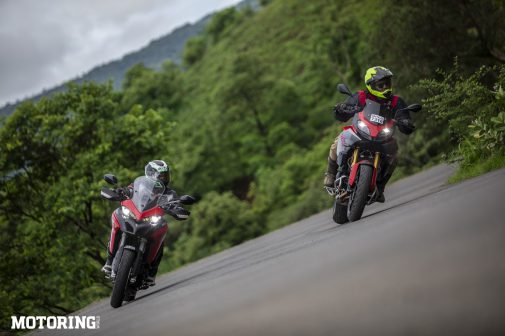 OKAY, BUT WHY THESE TWO?
It is a face-off you just can’t run away from in today’s world. Imagine having a bag of money and the urge to spend it before someone gets to know about it. Both the bikes here are nearly similar in terms of displacement and power outputs, the Multistrada 950S and the F 900 XR have both co-existed, minding their own business, until now. You see, the difference in price tags on both these bikes is nearly about 4.5 lakh, but if you leave that aside, they are nothing but fierce boxers in the ring wanting to knock out one other. Is the BMW with its German engineering finesse and smaller sticker price the one that makes more sense, then? Or is it the Ducati, the exotic Italian, that is worth the extra money?

ROAD AND DIRT
You’ve seen the BMW F 900 XR on these pages earlier, and so you probably might just know what it is all about. It’s brisk, extremely agile and capable enough to make you grip the tank tight and hold on to the ’bar when the throttle is twisted. It is like a naked bike pumped with adrenaline on stilts that loves to carve its way through canyons for breakfast. Once you are accustomed to its dynamics, the F 900 XR is an absolute delight to ride hard. Also, despite its 17-inch wheels at both ends, the F 900 XR is good enough even to have some fun on the trails. 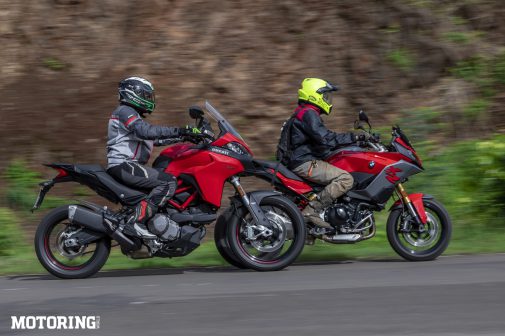 The Ducati Multistrada 950S, on the other hand, has been around for a while and has been recently updated, and it continues to be one of the most desired sports tourers in the world. And the reason is not that it’s Italian and red, but that it is well balanced, fantastic in its agility, and quick at sprinting from the moment you set off, doing full justice to its sports-tourer genes. Once astride, you sit inside the bike, and the fuel tank and pillion seat are at a height. While this stance might feel a little intimidating at first, you soon feel at home. The bodywork is larger in comparison to the F 900 XR, but it never feels like too much to handle. And all of this is even before you’ve started riding it. The Multistrada’s unusual styling can give off a confused vibe in comparison to the F 900 XR’s sharp and well-defined lines, but in the world of sports tourers, it is not the looks that matter, it’s the capabilities that do. Right?

CHOMP AWAY
It is battle time. The one where the Italian locks horns with the German. But this isn’t a roadside brawl; both represent prestigious brands that have a long lineage of achievement in technology and racing, which is why we can let the numbers do the talking. Let’s start with the Ducati first. A liquid-cooled L-twin motor displacing 937cc is strapped within the tubular-steel trellis chassis of the Multistrada 950S and it is capable of punching out an impressive 113 bhp at the 9000-rpm mark. The torque produced is chunky, too — a good 9.58 kgm of it coming in at 6750 rpm. And sending all that power and torque to the rear wheel is a super-slick 6-speed gearbox assisted by a bi-directional quick-shifter. Fuelling is taken care of by Bosch electronic fuel injection with 53-mm throttle bodies and a ride-by-wire system that allows the intervention of different riding modes with customisation.

The F 900 XR is obviously fuel-injected, too, but this one features a parallel-twin motor that’s also liquid-cooled and has dry-sump lubrication. With a smaller displacement of 895cc, the BMW’s motor produces 103 bhp a little earlier at 8500 rpm and a torque figure of 9.38 kgm at 6500 rpm. With that, the BMW is exactly 10 bhp down on the Ducati. Critical, but then again, the German runs a slightly higher compression ratio and weighs 10 kg less, which translates to more grunt and acceleration. Transmission duty over here is a 6-speed affair as well, and is assisted by a two-way quick-shifter, but the operation is not as smooth as the Multistrada’s.

NEED FOR SPEED
In the real world, the all-out performance of both motorcycles is strikingly identical. While the Multistrada feels engaging, the F 900 XR’s effortlessness shadows its potential in terms of feel. Till now, the Multistrada was looked at as the sportier kind, but with the F 900 XR in the picture, the sportier credentials go to the latter mainly due to its shorter wheelbase and more road-biased wheel setup. Good action at the throttle will get the front wheel floating off the tarmac as you shift through the first three gears, and that feeling can get addictive very fast. The BMW, when ridden on simmer, is very smooth and relaxed, and the overall setup is so forgiving that it becomes easy to forget it’s a 100-bhp motorcycle.

On the Multistrada, while the riding stance is comfortable, it does involve a bit of getting used to the aggressive power delivery of the L-twin motor. You need more courage to ride the Multistrada flat out as you are sitting close to an upright position most of the time and the tall handlebar does tend to shift the weight to the rear, threatening to lift the front off. Either motorcycle will take you well beyond the 200-kph mark easily, but the F 900 XR’s short windscreen and raspier exhaust note heighten the sense of speed. You need to be a seasoned rider in sync with the F 900 XR to give the Multistrada a tough time when attacking a set of twisties.

TURN IT UP
Agility is one of the most important reasons why these middleweight sport tourers exist. And in the case of these motorcycles, the showdown gets only fierce. Between the Multistrada 950S and the F 900 XR, it is the former that has the upper hand here, on paper at least. The F 900 XR’s rear suspension features hydraulic adjustment for preload and rebound damping, which can be adjusted through the riding modes. As for the front, it gets a 43-mm USD setup that’s non-adjustable.

Moving to the Multistrada 950S, Ducati has equipped the bike with fully-adjustable suspension at both ends with electronic compression and rebound. It also gets the Ducati ‘skyhook suspension evo’ which works wonders with how the motorcycle performs over a variety of surfaces and undulations. It is a computer that constantly takes information from the front suspension and prepares the rear for it in advance. Cool stuff, indeed.

After riding the bikes back to back, it is clear that the Multistrada bags the win in this department. But the F 900 XR is nothing less than a hardcore corner-carving bike. The stiff overall setup does let one play aggressively, and is tougher as it asks for a certain level of commitment which is rewarding in the end. 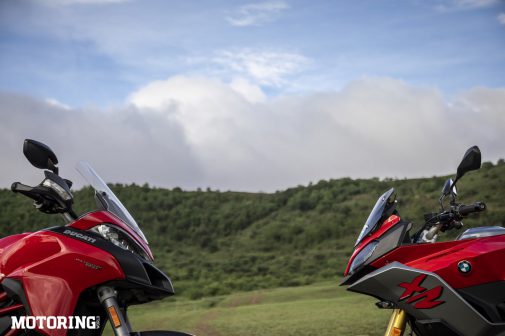 WHO DARES, WINS!
As far as comparisons go, this is without a doubt a tough one, and I am sure you’d also agree. It is quite rare for two motorcycles to breathe down each other’s neck with such intensity and determination. In reality, while the Multistrada 950S and F 900 XR are evenly matched, it takes two very different and very conscious riders to make the right decision. The F 900 XR’s sporty and aggressive character asks for a more skilled and mature rider, while the Multistrada 950S’s well-balanced and forgiving nature allows someone with less experience a reassuring upgrade, even if it is from a smaller class of motorcycle. So, in the end, it doesn’t matter whether it’s an Italian or a German bike that you ride, but it’s more to do with what lets you enjoy riding more by putting a wide smile under that helmet.