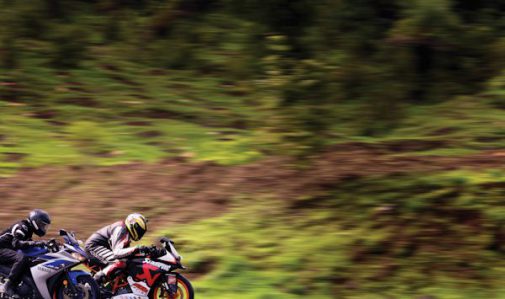 Lighting up its rear tyre is the KTM RC390, a motorcycle that has impressed the world. It’s what every young motorcyclist wants — a fiery single (the motorcycle kind, I mean). It’s sharp, uncouth and really, really quick. Staring it down is the Yamaha YZF-R3 — a bike Valentino Rossi has chosen to train VR46 Academy students with. Can there really be a bigger compliment I can give it? Both of these motorcycles can show a featherweight rider the bright side of 170 kph and this means these are, in the real world, two of the fastest motorcycles money can buy. Serious business, then.

Is it a straightforward shootout, however? Not exactly. The R3, you see, offers an extra cylinder over the RC390 and this, on paper at least, accounts for a major divide between the duo. It’s this extra cylinder that makes the R3 calm and composed, linear in the way only a Yamaha can be, and also — most crucially — more expensive than the RC390 by over a lakh of rupees. And it’s a few bhp down on the RC390 as well. Should you sense foul play from Yamaha? Or is the KTM just that ahead of its time?

Instead, what if I told you that the two motorcycles you see here are one and the same? Oh, of course you wouldn’t believe me. One has the moral compass of a freckly 16-year old, while the other has the composure of a sage. They can’t possibly be the same, can they? But hey, remember what happened to the puberty-ravaged teenage-you who had no idea what a provident fund was or did? Coming of age — that’s what it’s all about. Thus, the RC390 and R3 are the same, just at different junctures in life. 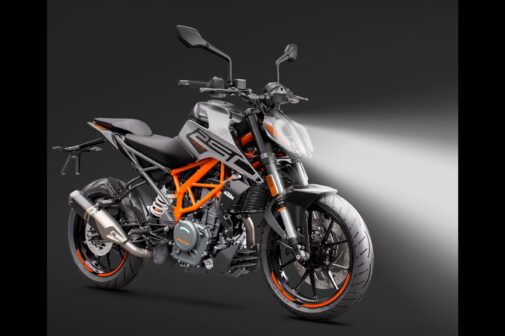 This is reaffirmed the moment you swing a leg on, first, the RC390 and then the R3. The KTM contorts you into an instantly aggressive riding posture and it does not compromise on its singular focus. Not even a wee bit. I like how slim and compact the RC390 feels and the committed riding position does more than just alter the ergonomics — it actually makes you want to ride fast, all the time. Right after trying out the RC390, the R3 feels almost commuter-ish. On the R3, you sit more upright, the ’bars are easier to reach out to and even the seat is wider, more plush. Its riding geometry doesn’t feel aggressive and that (as you will find out later on in this story) is how it likes to play.

I should have anticipated this, actually, since this instant aggression on the KTM comes in on paper as well. Its ‘designed-to-win-comparison-tests’ 375cc motor produces 44 bhp — enough to make every motorcycle scribe biased towards it — and it weighs in at 166 kg. That is an impressive output figure and looks like a terrific power-to-weight ratio as well, but the Yamaha isn’t too far behind, either. Within its diamond-type tubular frame (no Deltabox) is a 321cc parallel twin (quiz: Which was the last parallel-twin Yamaha sold in India?) which makes 41.4 bhp at 10,750 rpm. That’s a clear deficit over the KTM, considering it weighs a shade over 175 kg. Or is it? As always, there’s only one way to find out.

The flag drops. The RC390 gets the head start, but the R3 is close. Within nudging distance. Well, a little bit more of low-end grunt would really help the R3’s case, but in the time it took you to read this sentence, we’re already well past 100 kph. And it’s still neck and neck. How can two motorcycles with configurations as different be so evenly matched?! On the RC390, the acceleration is frantic and this is amplified by its compactness. And while the R3 is seemingly calmer at first, its parallel twin engulfs you in a characteristic howl that is simply addictive. It makes you want to go faster, just so you can hear it for longer. At 150 kph, the R3 is parallel to the RC390 and it also feels a lot less stressed. Beyond that, with both motorcycles in top (6th) gear, it’s the R3’s domain all the way to the top. Even though the R3 cannot pull a substantial gap between it and the RC, it just feels more at home doing those kind of speeds. On the RC390, you’re constantly on tenterhooks. It’s relentlessly intense. Some of you may like it. Especially if you’re sixteen.

And this is the case even up the twisties, or on a racetrack, for that matter. I’ve been fortunate enough to ride both — although on separate occasions — on a track and while they may lap identical times, the manner in which they do so makes them completely unlike each other. The RC390 compels you to be bolder, more heroic. Like all hot-blooded teenagers, it’s desperate to impress — and it does. The R3, on the other hand, has a more experienced outlook on progress. It’s fast where it really matters, but its performance goes beyond sensationalism and click-bait headlines. Remember Valentino Rossi during his 125 days and know what he’s like now? That’s the kind of difference between these two motorcycles. 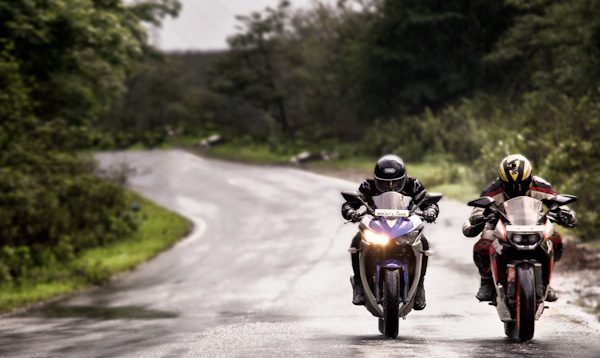 It’s no different in the corners as well. The RC390 definitely feels sharper when late-braking into an entry point and its USD fork and ABS-assisted brakes definitely add to its conviction, but the R3, even with a bog-standard telescopic fork, is a natural here. Yes, ABS and softer rubber would have only made the R3 a lot better, but in the real world, it’s the R3’s inherent fluidity that makes up for its lack of outright superiority. In a 100-kph corner (racetracks only, please!), for instance, the Metzeler-equipped RC has razor-sharp reflexes, while the MRF-tyred R3 just naturally tips over onto its side minus the intensity and dramatics. Crucially, though — and this maybe down to riding styles — the roomier, softer-sprung R3 is a lot easier to predict and adapt to than the RC390. In other words, you’ll be scrubbing knee-sliders a lot earlier on the R3 than on the RC. If that matters to you, you know where to look now. 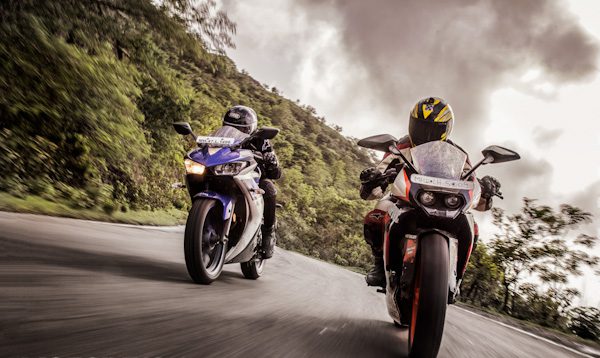 As you would have expected, it all boils down to price tags. Well, actually, it doesn’t. It’s obvious that the RC390 offers more — in terms of power, kit and outright speed — for a price that’s over a lakh down on the R3’s. But that’s where coming of age steps in. Evolution as a rider is not about wanting more, but about narrowing your focus. It’s about knowing what you really want and need. The RC390 is definitely the most mind-blowing motorcycle that kind of money can buy, but the R3 is simply a good-quality motorcycle that you can indulge in without worrying about making an impact all the time. The winner here is, therefore, a matter of perspective. And mine tells me it’s the YZF-R3.

We’d like to thank our fastest friend, Varad More, for loaning us his KTM RC390. Also, is there anyone out there who knows what a provident fund is or does? 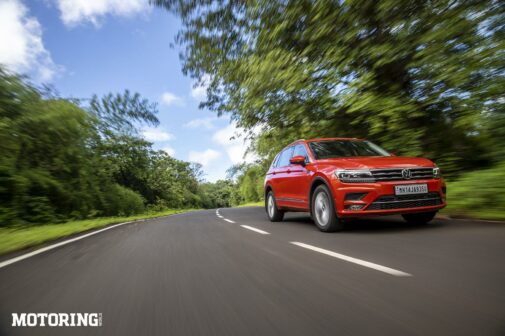 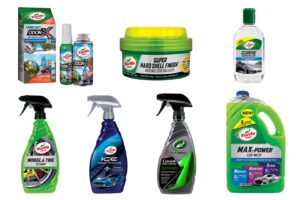 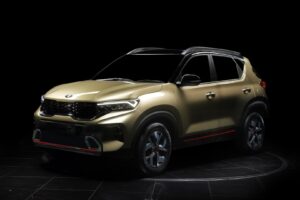 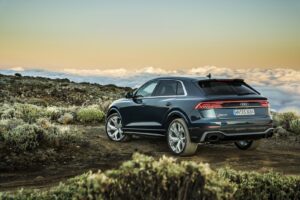 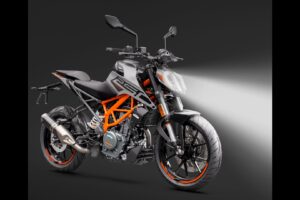 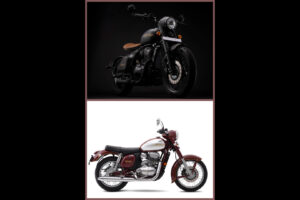 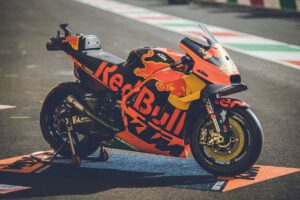