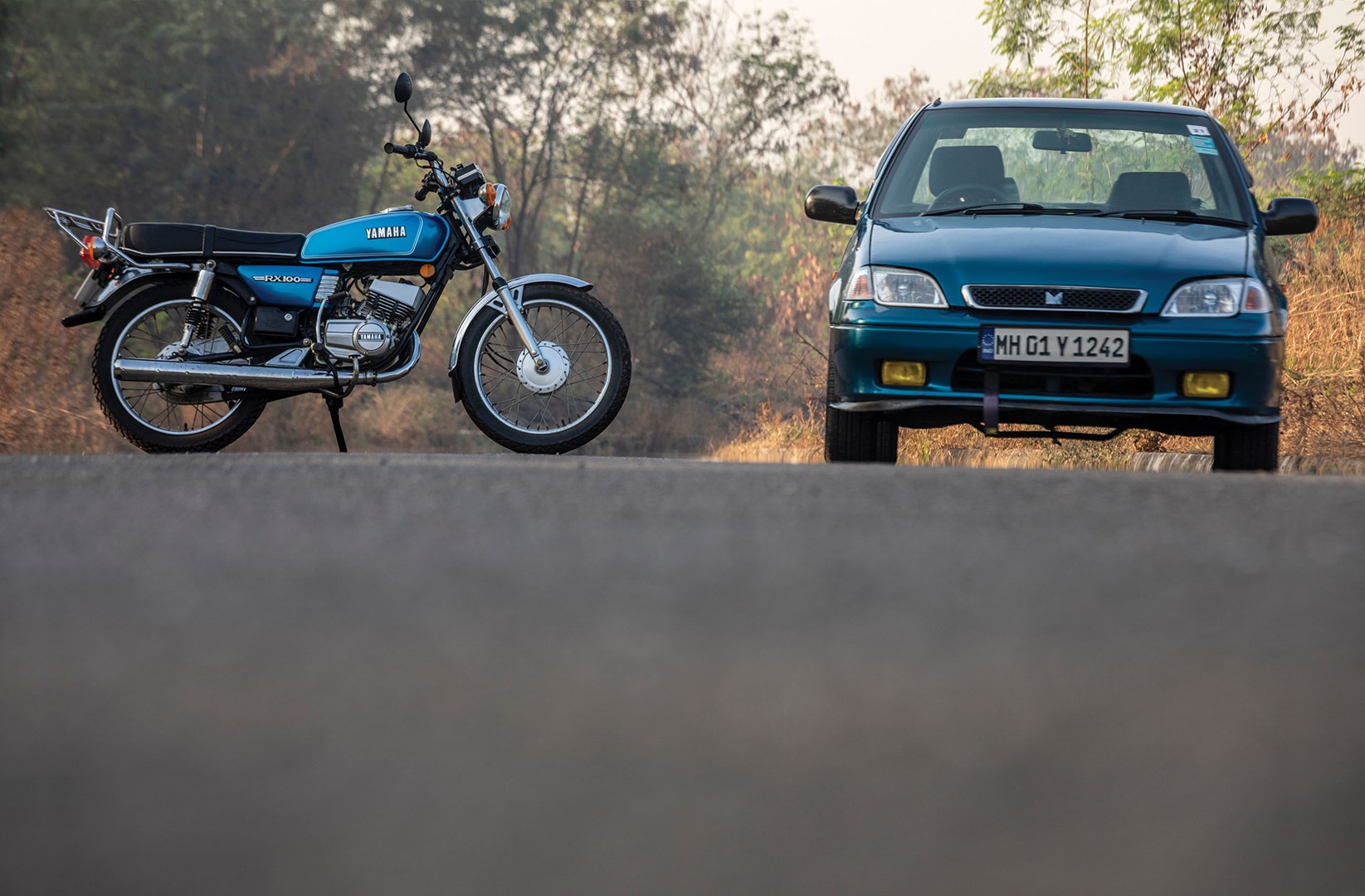 ‘Maybe, just this once, a car has a chance,’ I thought, between attempts to kick the throttle through the floor. What had followed each time was a bellow of rapid forward motion that casually waved off the almost-uncomfortable driving position and a dashboard so old-fashioned, Cro-Magnons would’ve scoffed at it. The Maruti Suzuki Esteem, old as it was, still had plenty of fight left in it. On a dark and early morning, it was headed straight for its nemesis for the day, the inspiring Yamaha RX 100. 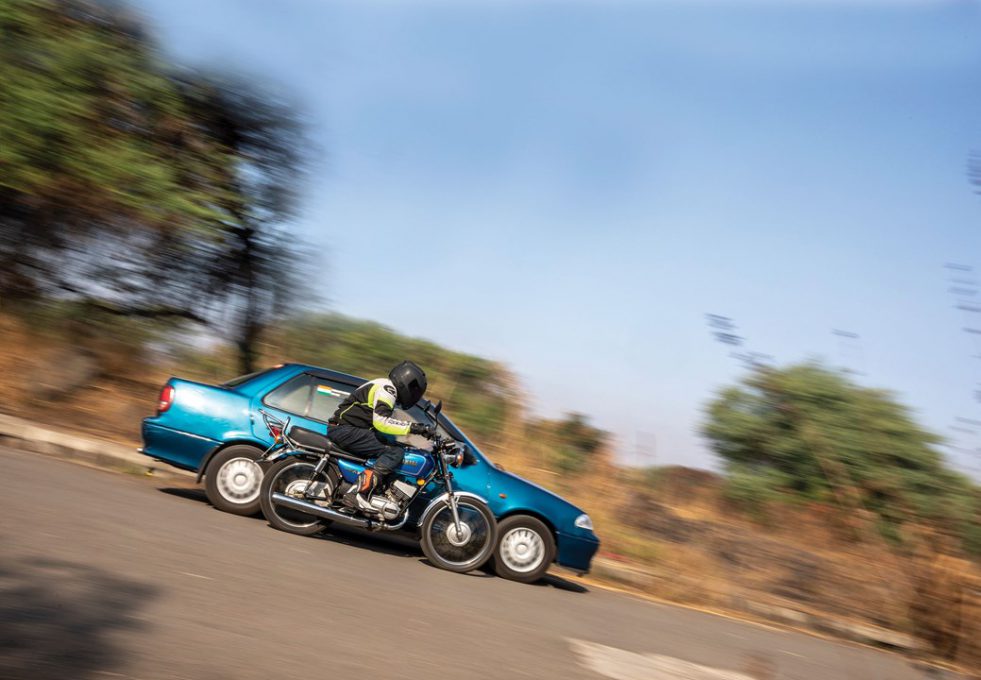 I glanced at the Esteem’s speedometer needle sweep past the 100-kph mark, and my sleepy eyes widened right up; the headlights could probably brag to a couple of skeptical candles, but not much else. A second glance at the dashboard caught the cassette player embedded in it like an old wound, and a sudden and pertinent question came to mind — ‘Does this thing have ABS?’ The answer was, ‘Of course not.’ But why was an old car on its way to meet an old bike? The answer, in one most exciting word, is motorsport. You see, few machines have dominated Indian race tracks and rally stages like the Esteem and the RX 100. In their respective classes, of course.

In 2009, I experienced a race-prepped Esteem and an RX that no one (who’d owned stock versions of either) would believe. I was either laughed at and/or accused of being a liar, and in return I considered them unfortunate for never getting their hands on a race-spec Esteem or RX. The RX’s racing career ended some time ago after two-stroke ban, but the Esteem is still out on race tracks teaching its newer rivals a thing or two. Meeting these stock examples for this story was, in a way, an attempt to refresh 11-year-old memories. I may have stopped telling those stories, but I never stopped believing in them, though I may have needed this as a bit of a refresher course. And refreshing, it certainly was — in a decidedly old-charming way. But first, since these are old machines with long lives, a little history.

The Esteem has lived more lives than the average cat. Its original Japanese name was the Suzuki Cultus, and the version we got in India was the second-generation one from 1988. It was known as the Suzuki Swift and Chevrolet Geo Metro in North America, Pontiac Firefly in Canada, Chevrolet Swift in Colombia, Subaru Justy in Europe, Changan Suzuki Lingyang in China, and Holden Barina in Australia. As you can see, the car really got around. In our case, at first Indians knew it as the underpowered Maruti 1000, but eventually we came to love it as the Esteem with its 1.3-litre 16-valve fuel-injected DOHC four-cylinder motor, its 85 bhp propelling a package that weighed 875 kg. With a power-to-weight ratio of 97 bhp per tonne, the Esteem was always going to the races.

However, motorcycles win all power-to-weight gold medals. And few wear theirs better than the RX 100 with its 110 bhp per tonne, thanks to its 97-kg weight and 11 bhp from its 98cc two-stroke motor; trust a two-stroke to produce a three-digit number from two-digit ones. To put this into current perspective, our favourite, the 8.3-bhp 112-kg 110cc TVS Radeon, offers 74 bhp per tonne. If we had race-prepped examples, the RX would leave only a trail of blue smoke for the Esteem to chase. However, since these are production machines that belong to others, no races were run. Indeed, there wasn’t even a contest, just a meeting among early-morning joggers.

The Esteem reached the spot first, and as the sun came up, it revealed the several chinks and scratches on the Esteem’s blue armour, especially on its bumpers. This particular car was an ongoing project and some way from completion; it had all manner of braces under the hood in addition to a booming aftermarket air-filter and header setup. A JDM sticker on the rear windshield made the car’s intentions clear. However, I wondered how it made sense; JDM stands for Japanese domestic market and I suppose we should call them IDMs instead. These pointless musings were interrupted by a bright and cheerful dot approaching us. The RX had arrived.

The early-morning sunshine was all the RX needed to out-blue the sky. It stood there on its side stand saying, ‘Paint all your French girls like me.’ Our three-strong group’s dropped jaws could only nod in agreement. This particular bike had been restored to perfection by YC Design of Mumbai. Apart from a few minor dents, it may as well have left the factory floor a couple of hours ago. As with most old-ish machines, both were running less than ideally, too; the RX’s carb was flooding and required a knack to start, while the Esteem had to be coaxed into cranking to life. But when they ran, they behaved like the absolutely reckless teenagers they are.

I wouldn’t let anyone tell me otherwise — the Esteem was still fast. That 1.3-litre motor still had a lot to say and show to early-morning traffic. It could still catch me off-guard with unprovoked wheelspin. The light weight and low stance made for fast and precise steering, even if the suspension was at the end of its life. The low seating position made me wonder how many drivers it had kept fit by providing daily exercise. More than anything else, though, the Esteem still hadn’t become a typical old car. It was stuck somewhere between the ‘gentle’ performance of the generations before it and the emissions-sanctioned emasculated efficiency of today.

From the outside, the Esteem still sported that perfect sedan stance, especially from the front three-quarters. And it still made one want to bolt on a tasteful spoiler, grilled bumpers with huge foglamps, and wild alloys housed in low-profile rubber… maybe there’s still merit in the JDM term. Also, remember that toothy grille from one of the Esteem avatars? That’s actually from the car’s other life as the Subaru Justy; trust me, the grille makes perfect sense when you see a Subaru badge in it. I, however, preferred the very first face the Esteem showed us, clean and simple, just waiting for an oscillating red light from KITT of Knight Rider fame. The RX, of course, was nothing like it.

The Yamaha was a Japanese miniaturisation of classic British-bike styling, and as such is timeless. Everything about it was light; its weight, its handling, the kick required to start it, and the front wheel once you got going. From the first tiny cloud of fragrant smoke that issued from its exhaust, the RX made its intentions clear. In its own Lilliputian manner, it was out to take no prisoners, an attitude amplified several times via heavy-duty tuning when it went racing. Even beneath the restored veneer of this particular RX, that spirit of bite-sized rowdiness still lived on.

And nothing made a sound like an RX 100, not even its similar-looking 135cc siblings. The RX 100’s exhaust was a musical instrument, not a mere device to expel the byproducts of internal combustion. It was ringing a hundred smoking bells wherever it went, the frequency dependent on the throttle. In corners, it felt like a bicycle on the mildest of steroids. In traffic, it buzzed through gaps like a most distinguished mosquito. It could putter around in the hands of a dutiful father, and raise hell in the hands of the good-for-nothing son. And the RX always knew what it’d rather do. Like the Esteem, it wore many polite masks on its sneering face. 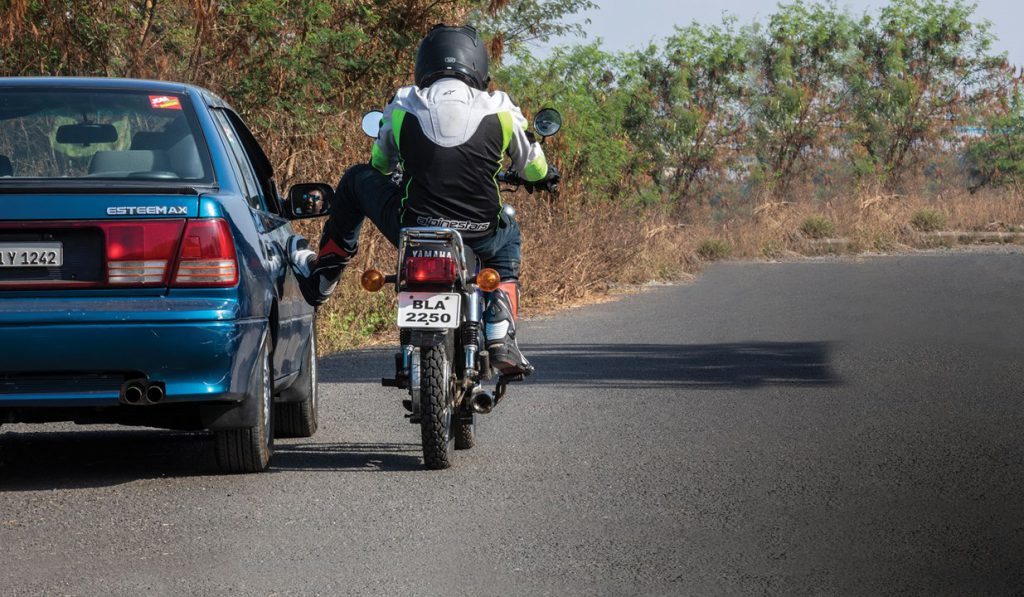 It is remarkable to note how much sense these machines make even today. The Esteem is still cheap to buy and run, as far as cars go. The RX, for some reason, is an expensive affair these days. I’d be careful to go after either, honestly, because I’ve learnt that it’s rather easy to get carried away with seemingly harmless projects. However, both machines made me wonder if progress is really absolutely required in some cases. I can easily imagine a JDM couple with two JDM kids happily growling around on late-night city streets. And an RX wouldn’t look out of place in that picture, too. Every time I ride an RX, it makes me want one… which is a bit worrying because I already have two. But the RX is like a playful kitten — and you can never have too many of those.

These two machines ask the question, ‘Why do modern cars and bikes have all the personality of tube lights?’ The answer may well be focus. Very few machines, then and now, have one clear direction in which they want to take their users. Which is also probably why the Esteem and the RX both ended up racing others. These two have had long and distinguished motorsport careers with thousands of stories between them. The sound of their exhausts still lingers at race tracks and on rally stages throughout the country. And with that image, it was time to call it day. A day spent listening to a smoking pipe and looking at a cassette player.