There weren’t many reasons to put these three machines together. In fact, I can’t think of a single one, except that we all thought it’d be a cool thing to do as the lead story for the anniversary issue. And it was, too — a 1017-bhp morning can only be a welcome occasion after all, especially when it involves three machines with very different takes on speed. Representing their respective lineages were the Suzuki Hayabusa standing in for the two-wheeled kingdom of which it is a revered figurehead; the Mercedes- AMG A 45 S, the racerboy king of hot hatches; and the Audi e-tron, harbinger of the electric era. I can assure you that tunnel vision didn’t take long to commence. 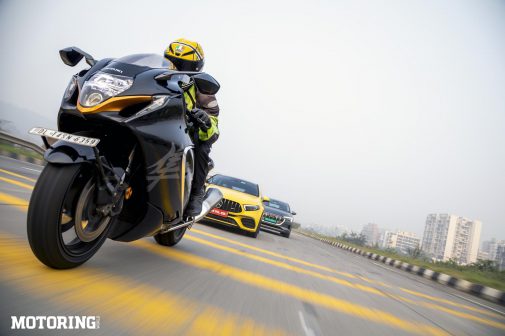 The Hayabusa’s 1340cc inline-four banging off its 8000-rpm launch control setting was enough to intimidate anyone, especially a couple of cars. Or so I thought; after all, both the Merc and the Audi have their own tricks up their German sleeves. The A 45 S, as I discovered on a high-speed track last month, is an accomplished speedster, with the world’s most powerful production inline-four motor rated at 421 bhp. The Audi, on the other hand, produces 408 planet-friendly horses and 68 kgm of efficient twisting force from standstill. The AMG’s 57 kgm and the ’Busa’s 15 kgm suddenly looked rather uncomfortable. And all of this while the Suzuki had only one wheel to put power down with, while the Germans gained the obvious advantages of their 4Matic+ and quattro all-wheel-drive systems. And yet. 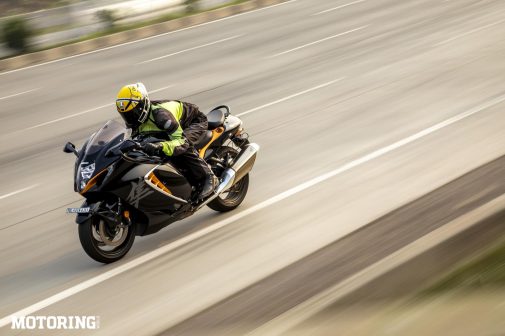 Launched in full-power mode, the Hayabusa ripped all doubts to shreds, as only a hyperbike could. I let the clutch go, and the horizon darted in sheer terror, as the Hayabusa chased it like an apex predator. A high-speed run on the Hayabusa had all the brutality and eruption of speed seen in a hunt, and everything in sight was prey. Hunkered down behind the fairing visor, I could barely keep up with the tachometer needle’s demands. First gear was enough to shatter every speed limit in the world, and the rest of the gearbox was only a test of the rider’s bravery; the numbers stand at 0-100 kph in 3.2 seconds, 0-200 kph in 6.8 seconds, and a top speed of 299 kph. Somewhere far behind, I imagined the Germans’ headlights blinking in disbelief at the 188-bhp dot in the distance.

Since I wholly lacked the aforementioned bravery on public roads, I only saw the redline a handful of times in the lower three gears. And that was quite enough, too. Then again, the Hayabusa is about more than being just a speed-fuelled sensory-overload machine. The gruff-sounding motor felt as robust as a boulder, albeit one that revved to a smooth 11,000 rpm. And despite being as powerful in real life as a mythological character, the Hayabusa’s everyday capability is simply humbling. It made me think, ‘If this bike can do it, surely I can? So why not get one?’ Well, for one, I know myself and I wouldn’t make it out alive. Even so, the Hayabusa was perfectly happy threading the needle through traffic at a pace that was at once reassuring and rapid. Not for nothing is it a true legend.

Speaking of legends, there was also the bright yellow car. The A 45 S was a hard-nosed pint-sized brawler — of the three, it felt like it was out to prove a point the most. It had shouty paint and an aggressive body, a loud button for the exhaust, and a Race mode. Hardcore enough for you? After the Hayabusa, I expected to be let down a bit, but nothing of the sort transpired. I could set the driver seat’s bolsters till they tightened against my torso like a high-performance corset. And the front passenger had that choice as well, though anyone at the rear would likely experience immediate-onset motion sickness. After all, the A 45 S came loaded with the maps of many famous racetracks around the world — and I knew that’s exactly the kind of driving it wanted. 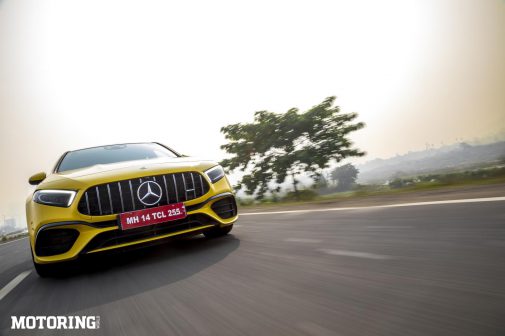 Under the A 45’s hood lurked a turbocharger that looked like a python after a big lunch. And so, even if the Hayabusa and the AMG had inline-four hearts, the latter felt as Japanese as Oktoberfest. There were six driving modes, though I kept switching most between Comfort and Race, skipping Sport and Sport+ in between, in addition to Individual and Slippery modes. And honestly, the difference between the modes is all but academic because the A 45 S is a hooligan right down to its bones, only with the luxury trappings of a Merc. Its ride quality will not make you any friends; in fact, the ones you already have will probably start avoiding you thanks to the AMG’s rigid behaviour. And that’ll be okay, too — the car is all the fun company you’ll need. 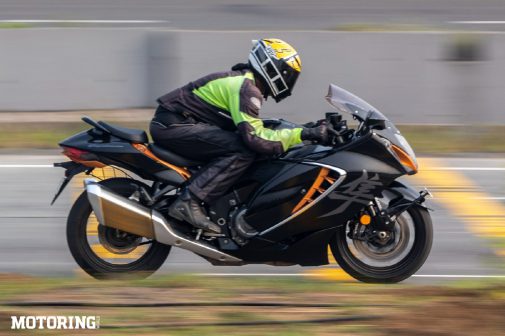 Clicking the steering-mounted dial to Race had a real sense of occasion to it; its screen stopped showing words as it did for the other modes, displaying only a chequered flag to set the mood. I took a breather to appreciate the materials and cues in the cabin that formed a sporty cocoon around me, followed by a healthy blip of the throttle to soak in the song of the quad pipes. It sounded like an inline-four all right, but not a run-of-the-mill kind. And after pulling the drive lever to D, the pedal went into the sporty carpet, and the hatch went barreling down the road like a teenager drunk on prodigious power.

Really, this much power in a hatchback is a novelty even for a jaded motoring journalist, and it can never get old. And before long, I discovered the drag race mode in the A 45 S screen, and that led to draining the fuel tank more than was called for, with 0-100 kph in 3.9 seconds over and over again. Last month, I saw an indicated 278 kph on the A 45’s speedometer at the test track. This time out, I got nowhere close to that, but the AMG’s willingness to get back up to that figure was all too apparent. Scarily so, even. That giant turbo did entertaining justice to the term ‘forced induction’, and it was the key to sending the Merc down the road in the manner it did. By the end of the day, I had little choice but to whip out the imaginary book in my mind titled Legends and add the A 45 S to it. And then there was the e-tron. 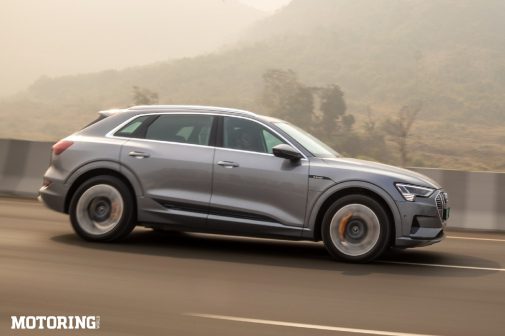 Now, everyone says that what the Japanese inline-four did to British twins, the electrics will do to the internal-combustion machines we’ve grown up with. As such, it used to be difficult for me to approach EVs without a certain amount of hostility — the e-tron was the EV that changed that a few months ago. I suppose all I really needed to see for real was an EV that could realistically replace the fun that IC engines provide. Now, with a 0.7-second gap between the Suzuki and the Merc to the 100-kph mark, the Audi’s 5.7-second run to 100 kph might seem like a prolonged yawn, but it’s not when you consider it weighs in at 2520 kg — that’s 594 kg more than the other two combined. Not to mention that it’s a luxury SUV, not a sporty machine; how I wished the e-tron GT could’ve made it for this shoot.

Nonetheless, the e-tron did an admirable job of defending its kind. After the other two, the Audi’s adjustable suspension and generally superlative comfort was a welcome change. And it was still quick and fast enough to be entertaining, no less, obviously in a very different way. It had the best touchscreen I’ve seen yet, which made me prod it for more or less no reason at all. I raised and lowered the suspension just because I could. And when I got bored of playing with tech, I still had gigantic torque with which to warp the world. That it all happened with only ambient sounds and road noise did feel a little strange, but it’s nothing I couldn’t get used to. Used to, but likely never appreciate. That’s an expectation for the next generation of motorists to fulfil, I’m afraid.

We’re all products of our respective environments, and while I appreciate the specious advantages that EVs bring, there’s a reason why my garage is filled with old two-strokes. And not a single car. Also, since I spent all my time with these machines on straight roads with only U-turns of varying radii, I was unburdened with concentrating on vanishing points. All of that extra attention, then, went directly into staring at these machines. The Hayabusa, of course, is the most recognisable of the lot, even if all its stickers were to be peeled off. The Germans do get accused of following a familial template all the time, but these two don’t follow that road; the A45 is exaggeration taken to a cheerful extreme, while the Audi is understated silvery class. 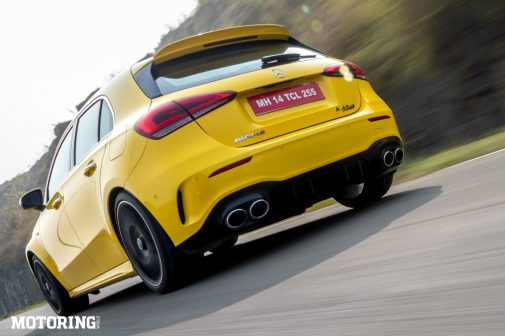 In the end, it was a day of happy extremes. A superbike, a performance badge and an EV rubbing shoulders (not literally) on open roads. There’s no question about who the boss was, but the others weren’t exactly shrinking violets. To me, that means there’s a rider/driver for each type of machine — being one doesn’t mean automatically excluding or denying the other. And if this can be said about a high-budget trio that isn’t exactly for everyone, I imagine the road ahead is wide open for all kinds of machines to show us what’s possible. Even if the echo in the wind remains the eternal howl of a Japanese inline-four.