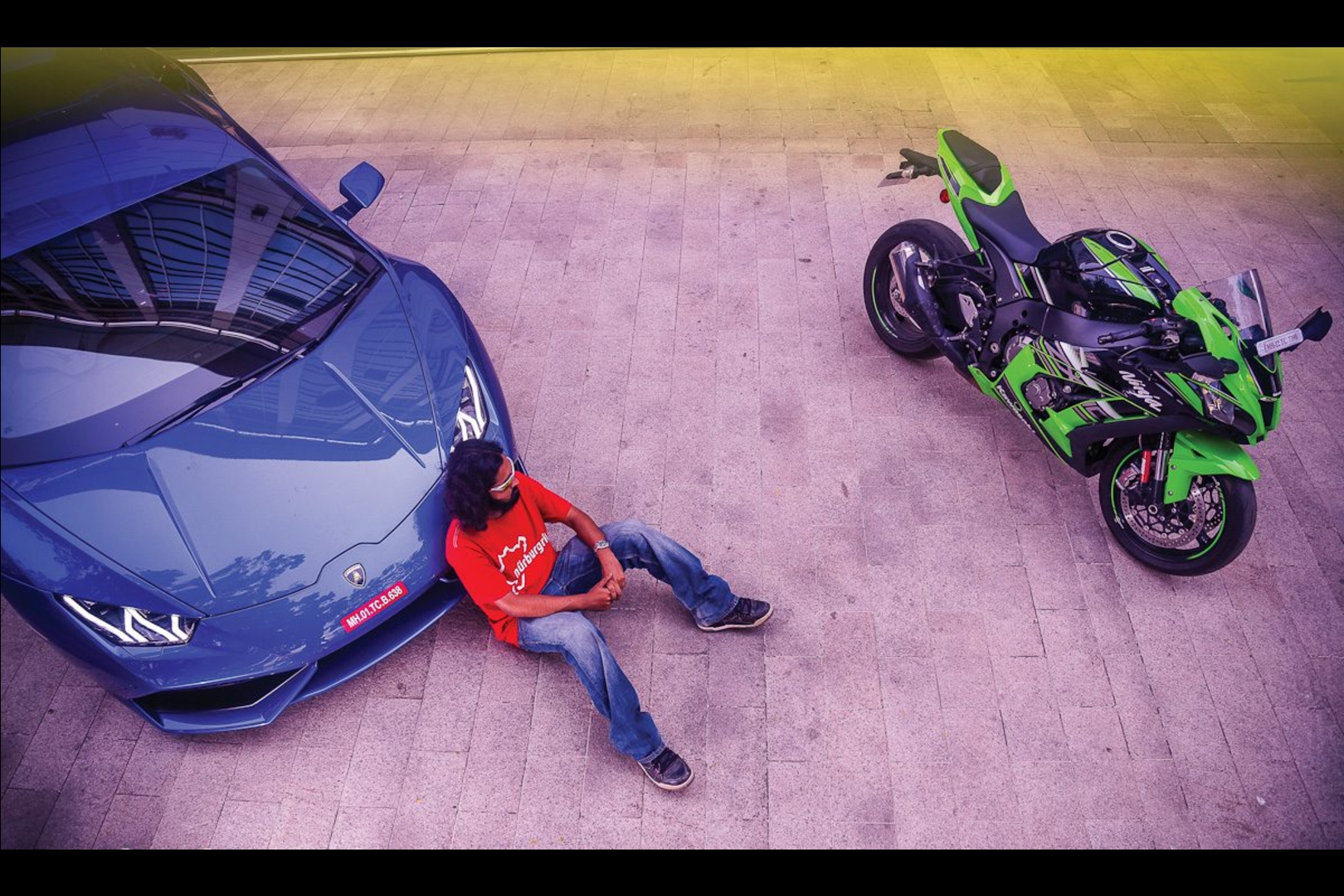 ‘Hey, Aadil. I just got confirmation that it is happening. Be ready tomorrow. Have fun.’

The phone fell from my hand, almost in slow motion, as I heard Kartik speak those words. He had just managed to get me a Lamborghini Huracán and a Kawasaki Ninja ZX-10R. For an entire day.

Growing up, people have a lot of different dreams and aspirations. Some want to travel the world, while others want to own a jet and a beachside villa. Me? Very simple. I just wanted a driver’s license. In my last year of school, I remember everyone being excited about going into college, but my joy was that I would get to go to college on a bike! 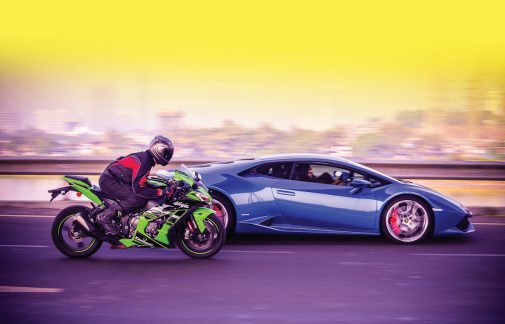 I’m sure you can imagine what my bedroom looked like. Superbikes and supercar posters everywhere, neatly segregated on two walls, much to my mother’s dismay. At the head of the cars section was, and still is, a Lamborghini Aventador and the bikes section was topped by a Kawasaki Ninja ZX-9R. And ever since I started riding/driving, there have been more than a few nights spent dreaming of those two machines. The power, the sound, the attention, the exhilaration! What would I do if I got to sit in/on one? Where would I go? Is there any place I could actually unleash them to their full potential?

All I can say now to the old me, is that I made it. The culmination of that dream, the dream of every petrosexual, is finally being realised. I’m driving a Lamborghini Huracán and riding a Kawasaki Ninja ZX-10R. *drops mic* 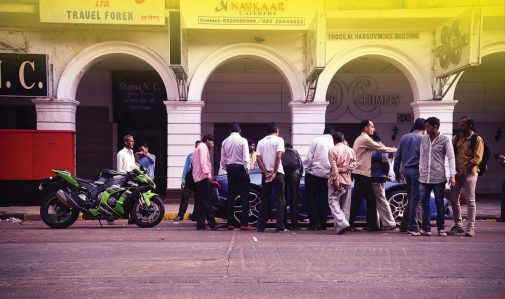 How does one prepare for a moment like this? I’ve had a license for just six years and I never imagined something like this would happen for at least another decade or so! I started to get all jittery the night before, so I went and got a haircut, cleaned my riding gear, scrubbed my shoes, ironed my clothes (twice), cut my nails (didn’t want to risk scratching the paint or leather) and conditioned my hair. Then promptly stayed up all night, going through every video I could find online regarding both of these wheeled missiles. Finally, it was 6am, time for me to leave. As I walked out of my room, I paused for a moment, looking back at my posters, some faded some shiny, and smiled.

The Lamborghini-Kawasaki pair was waiting for me a short drive away, though I don’t actually have any recollection getting there. All I know is that at one moment I was at my place and in the next I was standing in front of a Huracán and a ZX-10R. Lots of awe-induced swearing and wolf whistling followed, as I stared at the Blu Caelum (Lambo speak for metallic blue) Huracán. It is amazing how uniquely different a Lamborghini is to look at. 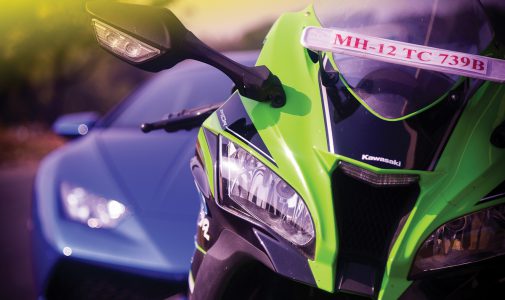 While most supercars are smooth and curvy, I assume the only tools given to Lambo designers (or shall I say sculptors) are an axe and a chisel. That’s the only explanation for a car that looks so, well, mad. It’s cuts and jagged edges everywhere! Even the mirrors look so sharp, and I mean that in the most literal sense. It now sports LEDs in the headlights, in the form of a jagged strip forming a ‘w’, and a huge front grille that looks like the mouth of a tarantula ready to swallow you whole. The 20-inch wheels and red brake callipers ooze aggressiveness and wouldn’t be out of place in an art gallery, while the rear of the car has the tail-lights that say, ‘Sigh, beating you is child’s play’. What a sight!

In contrast, the ZX-10R isn’t as in-your-face. If the Lambo is C4 explosive, this is a sniper bullet. Sleek and smooth, aerodynamic efficiency is the name of the game here. Twin headlights squint at you from either side of a ram air duct, neatly hiding the bulbous tank behind. The huge twin discs up front overshadow what is otherwise a beautiful three-spoke wheel, but the Showa Balance Free Forks chamber looks stunning in red. Look at it from the rear, take in the sheer acreage of rubber on the wheel and you realise this bike means business. But enough viewing, time to get in.

Of course, I chose the Lambo first. It does take effort getting into a supercar, especially if yoga isn’t a regular part of your lifestyle. You have to crouch, contort and stretch before you finally reach the interior, which is not cramped at all once inside. Bucket seats enveloped me as I stared at the steering with the bull logo and the drive-mode button at the bottom, labelled Strada, Sport and Corsa. But the dream is the engine start/stop button, hidden under a red flap, and that’s exactly what I went for.

Flipping it open, I said ‘And fire!’ in my mind as I pushed it. Immediately, I had an epiphany — starting a Lambo will not make you popular in your neighbourhood. It awoke with an almighty roar as the engine blipped to 4000 rpm before settling down to idle. Our car was fitted with an optional sports exhaust which made it even more shouty. Me? I was ecstatic! I was laughing and whooping once again, while startled dogs ran for their lives and people looked out of their windows as a metallic blue monster pulled away.

What I noticed immediately, is how much feel you get from a car like this. I could feel what was under each individual tyre, whether it was a stone or gravel. The second thing I noticed was that rear visibility was pretty much non-existent. For the most part, though, it felt quite normal and easy to drive. Of course, it’s a lot broader and way lower that what I’m used to, but other than that just leave the 7-speed ‘box in auto and putter around. Although, why would you be puttering around in a ten-cylinder Lambo, right?

I headed for open roads and at the first opportunity, I mashed the pedal. The car downshifted from 7th to 2nd at 50 kph and then two things took over — a catapult-like feeling accompanied by the bellow of a T-rex being attacked by Velociraptors. I was pushed deep into the bucket seats as the four-wheel drive system dug into the road for traction, instantly throwing me onto the wrong side of speed limits. Vehicles scuttled out of the way as I charged past blaring that glorious soundtrack emanating from just behind my head. Holy cow, this thing can move. And it can turn, too!

Body roll is non-existent and the amount of grip is phenomenal, even at highly illegal speeds. No tyre squeal, no fuss, just grip and power. And all this is in Strada mode, while if you switch it to Corsa, you better be more awake than you’ve ever been. The gearbox is now manual and the throttle is even more aggressive and sensitive. I tried it once, but it scared me so much when the back end kicked out (and this not being my own Rs 4 crore car), I put it back in Strada. I was shaking as I finally pulled over, with all the adrenaline pumping through my veins. This was the dream and reality turned out to be even better.

I didn’t know what to expect from the ZX-10R, though, as I climbed on. Unlike cars, superbikes are not comfortable. They aren’t designed to be and they don’t pretend otherwise. What you get instead is a full-crouch riding posture, so you better stretch before riding one. Pulling away feels natural and the power delivery is quite smooth and gentle. But this was an inline-four, so low down power is supposed to be like that. Being more of a bike guy, I was instantly more comfortable here than with the Huracán.

Heading back to the same open stretches of tarmac, I whacked open the throttle (leaving all the rider aids turned on, of course). The ZX-10R’s engine is like a video buffering. Upto 4000-5000 rpm, it is just waking up and loading, after which it suddenly pulls away like a rocket all the way to its 14000-rpm redline. First gear is good for over 100 kph and it also managed a power wheelie at 160 kph. At this speed, the riding position that felt uncomfortable earlier was suddenly making so much more sense with the amount of control on the bike it provided. The way it encourages you to dip into corners and hold the line just inspires oodles of confidence I didn’t even know I possessed. And the sound! It has a deep bass-filled note that gets deeper as the revs build, culminating in a high-powered scream. Of course, riding a bike like this takes up every ounce of your concentration; your vision narrows and what was very far is suddenly very close. That’s when I hit the brakes and had to use all my strength to push against the handlebars to prevent me flying over. Phew. 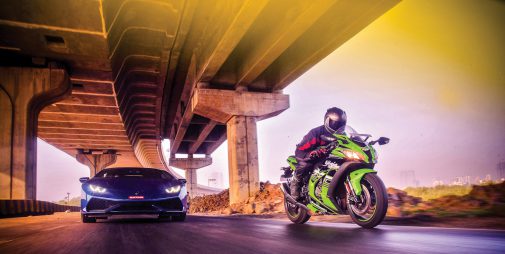 The Lambo and the ZX-10R are two very different machines, achieving dizzying speeds and childish thrills in an effortless fashion. What they have in common, though, is the attention they attract. Now imagine the attention they attract when they are together. Driving through traffic, we were constantly swarmed with smartphone-wielding paparazzi. Every time we stopped, a large crowd of curious and amazed bystanders would gather. Then walk away shocked when they realised how much it cost. So much so that we found images of us riding and driving around uploaded on social media, too! But this attention is a cause for worry because your heart is perpetually in your mouth every time someone approaches. You can’t just park these and wander off to do whatever. You can’t. You shouldn’t. Instead, you should sit and stare at them all day and all night.

I’m pretty certain I will never make enough money to afford these beauties. Driving a supercar and/or riding a superbike changes you. It makes you hate your daily vehicle because now you realise what you are missing out on in terms of feel, performance and all sorts of coolness. It shows you why the rich smile so much because it is impossible to do anything else. Most pretentiously wise folks will tell you not to meet your heroes as they will always disappoint. I ask them to drive a Lamborghini Huracán and ride a Kawasaki ZX-10R. And then come and talk to me. 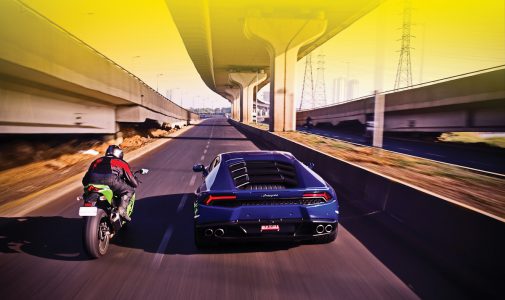 [This story was originally published in our January 2017 issue]