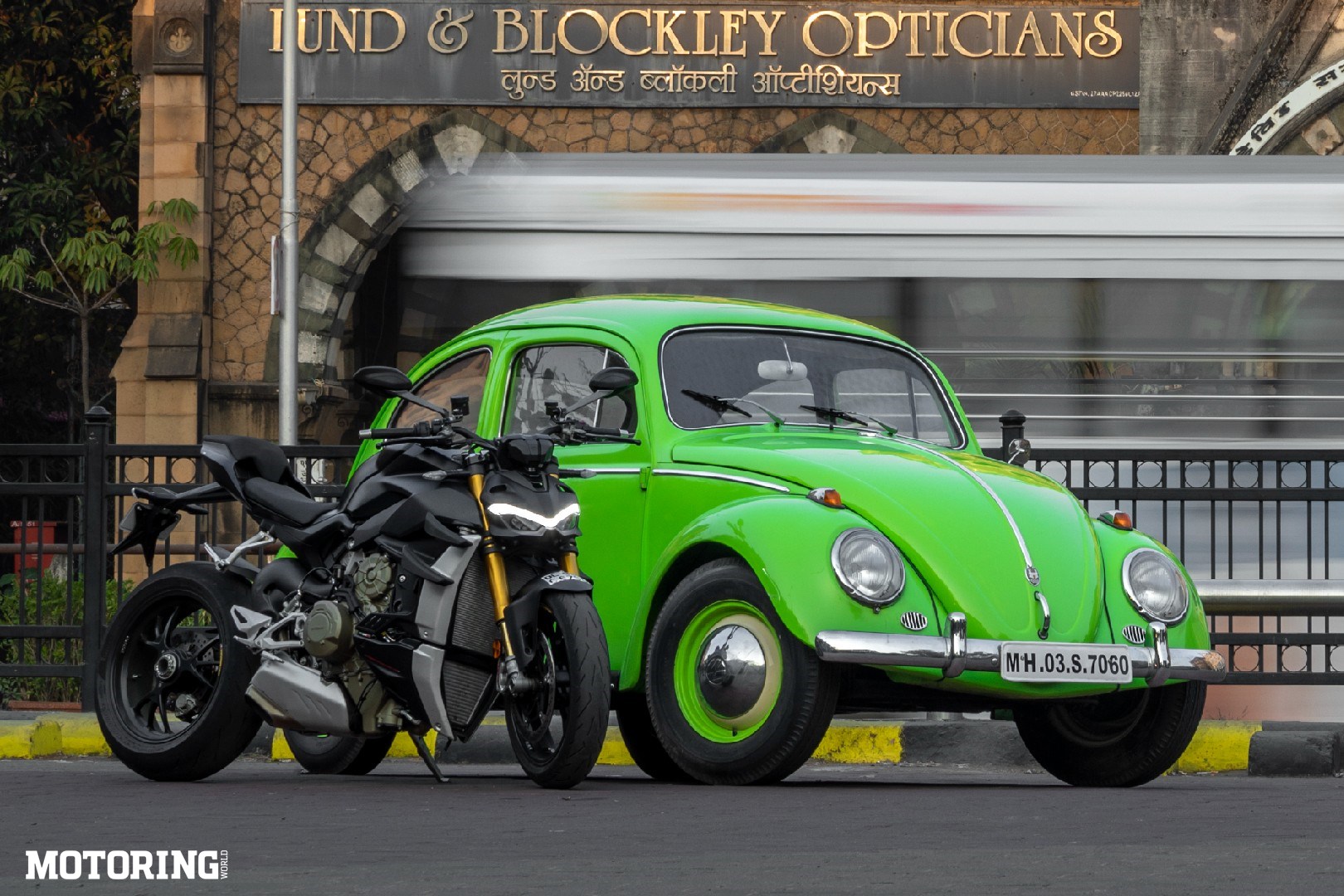 Chrome bumpers from 1960 next to MotoGP-inspired winglets from 2022 might just be the greatest definition of the word ‘contrast’. And that word is the only reason why you see these spectacularly different machines together on these pages. That, and the fact that I wanted to annoy ex-boss Srinivas Krishnan into waking up early and driving his bright green Beetle halfway across town so that we could annoy him even more with our well-timed jibes. His grumpiness is also a perfect contrast to his cheerful not-so-daily driver. Too bad I didn’t take him for a ride on the Ducati Streetfighter V4 S. Then again, the Italian brute had a pillion seat the size of my palm, so it probably wasn’t a wholly realistic prospect to begin with. 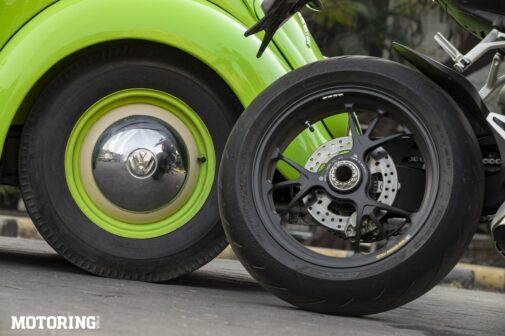 Anyway, what began with Hitler’s baby, the Beetle, grew into a global juggernaut that eventually bought Ducati which then made the Streetfighter V4 S. The entire world’s technological progress after the last great war is contained between these two machines. It’s almost mind-boggling to think that Srini’s retina-imprinting Beetle came 22 years after the first one, and then the model went on for another 43 years — a 65-year run that flew in the face of planned obsolescence. Quite brilliant, I say, and I must add the cliche that they certainly don’t make them like that anymore. Pity. They still should have. 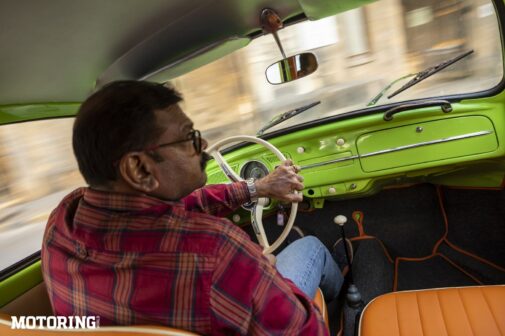 The Beetle has rather murky origins, with credit for its design going to three geniuses called Béla Barényi, Josef Ganz and Ferdinand Porsche, with varying levels of direct or indirect inspiration. Whatever its beginnings, the Beetle went on to become the most-manufactured car on a single platform ever. Its official name at first was a rather impersonal ‘Type 1’ and Hitler’s name for it was even worse — KdF-Wagen or Kraft-durch-Freude-Wagen (Strength Through Joy Car) which manages to sound equally bad in translation; nonetheless, ‘Beetle’ is obviously so much more endearing than the other names. And if I could go back in time and ride the Ducati Streetfighter into a meeting between Hitler and the aforementioned trio, I’m sure they’d die of awesome fright.

The Streetfighter is somehow a road-legal motorcycle, when in fact it has no moral right to be. Never mind that Ducati calls this motor the Desmosedici Stradale which means ‘desmodromic 16 valves road’. There is no road that can handle this madness, or perhaps it’s just our roads and/or me. I mean, who would think it’s normal to make a 208-bhp V4 and plonk it on a showroom floor for anyone to stroll in and buy? Okay, perhaps not anyone, but any well-off person with the money to test themselves with. If the Beetle was born as the people’s car, the Ducati is very much the rich man’s bike. And I sincerely hope they’re suitably skilled to handle the damn thing, too. 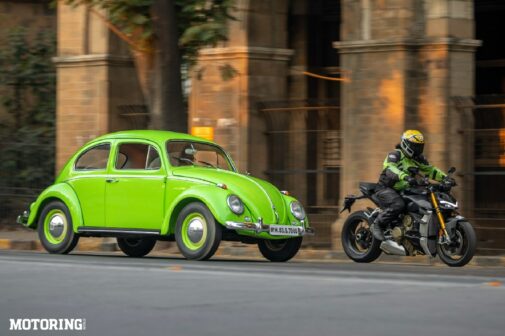 When we met up, the Beetle smelled like an old bookcase that had been doused with engine oil of the thickest grade, and then set to simmer on an iron stove. Meanwhile, the Ducati reeked of new-age exotic materials getting roasted by the sheer power every meaningful blip of the throttle produced. And both reminded me that I’d become indifferent to the smells that machines of all ages generate, and that was a surprise since I’m usually equal to a canine in these matters. It was an olfactory spectrum that was as much a symphony as the machines’ sounds.

Speaking of sounds, the Beetle produced the most satisfying ‘thunk’ from its doors closing, even after all these years. And that was immediately and unequivocally superseded by the Streetfighter explosive start-up. It almost took the Beetle’s flat-four blat by the neck and held it underwater till I couldn’t hear it anymore. However, seeing the shape like the Beetle’s was arresting enough for me to forget moving. And it was all right, too, since the old car was never going to outrun the modern miracle of a motorcycle. Indeed, it was comical, the rate at which I could either catch or run away from the chugging old-timer.

Srini doesn’t let anyone drive his Beetle, so I had to be content with the thought that if I’d added a tow rope to the duo, the Streetfighter would’ve pretty much dragged the Beetle anywhere against its will. After all, it was a modern V4 with 208 bhp against a geriatric 1192cc flat-four with 34 bhp, most of whom had died of old age. And yet again, I found myself asking if the Streetfighter would still be snorting derisively at the world after equalling the Beetle’s longevity. Simple things live longer, and that’s a fact that even VW seems to have forgotten. Then again, perhaps things aren’t that simple anymore?

This single Streetfighter had more buttons, electronics and settings than the Beetle has had in its entire lifetime, enough to make now-dead Germans celebrate in their graves. Try as I did, it was impossible to wrap my head around it all, so I left everything dialled up to max, to get the maximum taste of what the motorcycle was all about. As you can imagine, it was a sensory overload of the kind that most people won’t be lucky enough to experience. Just first gear was enough to leave the Beetle — and all other traffic — breathless in its wake, and it’s limited to 299 kph. Talk about unfair comparisons. But then, every comparison is unfair when it comes to the Streetfighter. Not that Srini cared one bit. He rarely does when his Beetle is around. 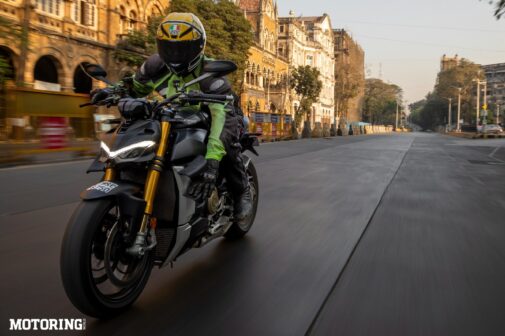 In his own words: ‘The sensation of driving a Beetle is unlike most other classics simply because of its rear-engined format. What is that sensation? Well, you can feel you are being pushed rather than pulled and that’s so distinctive. Secondly, there is a lightness of steering while in motion because there’s not much pulling from that front end or the engine load at the front. How does that translate on the roads? Well, on a straight road, there is not much difference — the fun is on the curves. At measured speeds, the Beetle turns delightfully into corners with the gentle push from the rear and the consequent straightening up after. Measured because you never know how it is going to react when you really push it – not that it gets pushed that easily, because the boxer is like a phlegmatic geriatric German who’s seen it all.’

‘Oh, and thirdly, there’s the sensation that you are actually moving and not stationary – which is a pretty good bonus from that unenthusiastic boxer motor. The scenery outside unfolds in slo-mo, you have more time to live in the moment and savour it; you can plan your next moves on how you’re going to evade the gawking pedestrian or that indifferent kaali-peeli; a faint breeze from somewhere in the firewall too adds to that sensation of movement. It is a sensation called being alive.’ I wouldn’t know, of course, because Srini continues to refuse to let me drive it. Then again, he couldn’t ride the Streetfighter, either, because he doesn’t ride. If he did, I suspect he’d gain a whole new perspective on the word ‘alive’. 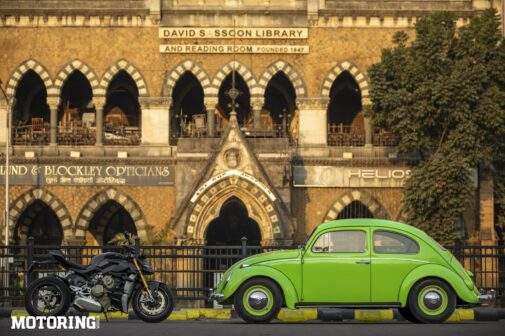 The Streetfighter is as intimidating as the Beetle is cute, and it looks that way, too. The car spreads smiles wherever it goes, while the bike freely distributes scares with its angry wings and loud bellows. Both look and feel quite unbelievable on the move, too, two ends of the four-cylinder Euro spectrum. And both somehow seemed impossible, even right in front of my eyes, like time travel came true. Each of them is special. Together, they’re an epic of engineering, even if their tails point in opposite directions. Say, how about a Beetle-inspired redesign for the Streetfighter?