The ‘Long Way Round’ motorcycle adventure of two buddies riding from London to New York might be extremely inspiring, but the road to good off-road riding skills is often a long way up.

You see, even the toughest rally in the world, The Dakar Rally, essentially employs 450cc enduro motorcycles for competition purposes. A good off-road machine has to be light on its feet and manageable through the thick and thin. No matter how much electronic trickery one employs in a machine, burly adventure motorcycles can never be as flickable and friendly on the loose stuff as their smaller-capacity counterparts. Lately, though, Indian motorcyclists seem to be hugely enamoured by big-capacity adventure tourers. As the statistics show, the Tiger 800 is the hottest selling Triumph in India and its competition like the Suzuki V-Strom and the Kawasaki Versys are raking in decent numbers, too.
The bigger question is, should one hop onto these mammoths directly, budget notwithstanding, or should one ride up gradually starting from something more manageable like, say, an RE Himalayan or a used Hero Impulse? In all honesty, climbing up the order is the best way to learn the tricks of the trade without having to hurt one’s self esteem, bank balance or body. It is imperative that one works on building a firm foundation of off-road riding before straddling a large motorcycle. Same goes for road riding, too. But we shall discuss that another time. 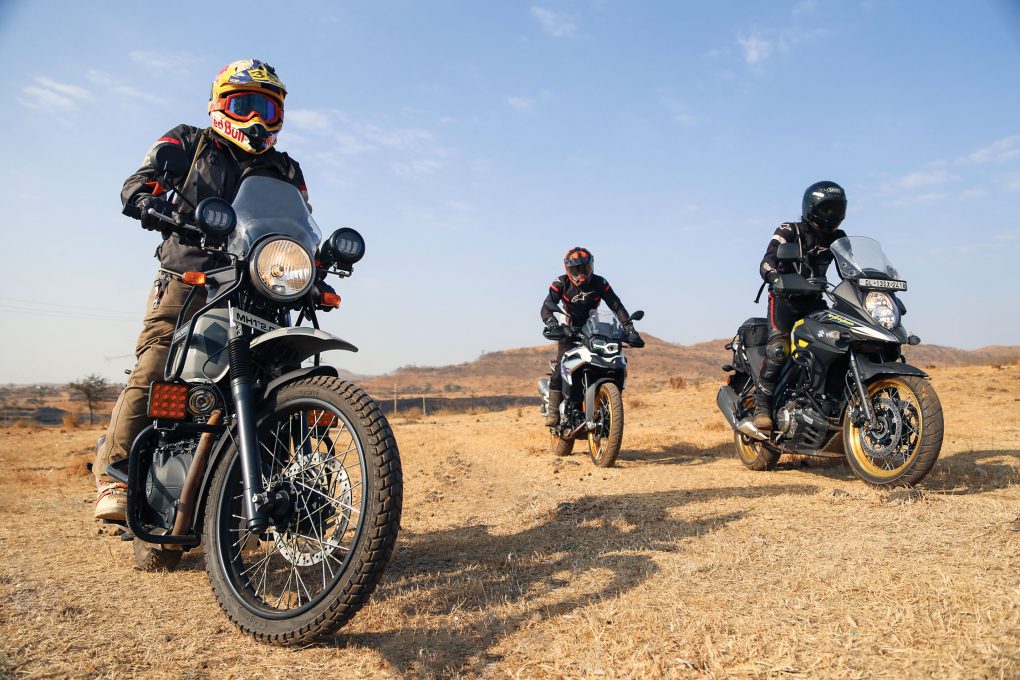 Start slow and easy, and build your way up the higher echelons of adventure riding. That way, one can truly exploit his or her potential with minimal risks or damage. For instance, as a beginner, hopping onto a Himalayan and going trail riding with your buddies is certainly more welcoming than getting atop a BMW R 1200 GS weighing a quarter of a tonne and taking it over boulders. That kind of riding skill cannot be acquired over two-day riding school training. It takes years of practice and learning before one can master these juggernauts off-road.

And these days, it’s relatively easy to upgrade gradually to a bigger machine once you have fully exploited the potential of the smaller one standing in your garage. With enough saddle time on a smaller-capacity adventure machine, you will find yourself more comfortable riding the dirt and ready for something bigger to push the envelope. 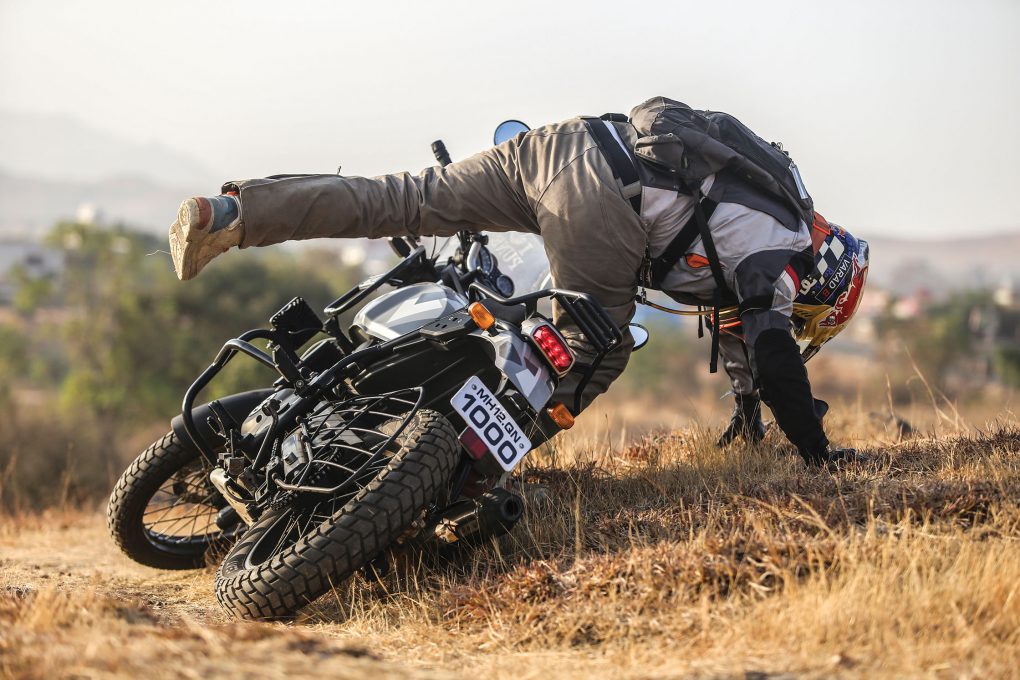 If you are new to adventure riding or motorcycling in general, it is best that you pick up a used Hero Impulse or a Himalayan BS4 and start with your off-road lessons on them. A light and friendly machine like one of these two will allow you to focus on the game rather than getting intimidated by their bulk and frightful power delivery. 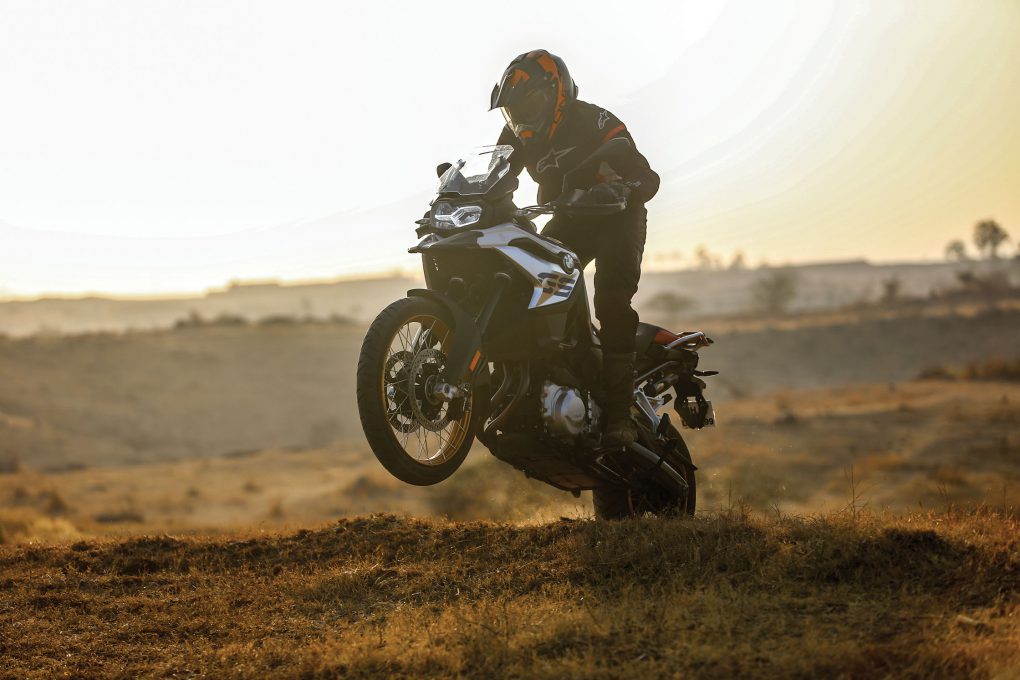 A lighter, cheaper and slower machine also means you will not hesitate to take chances with it which will only add to your riding skill set. Dropping an Impulse or a Himalayan isn’t going to drill a crater in your wallet and more importantly, it won’t be standing in the service bay for months waiting for parts to arrive.
As you keep riding and getting better at the sport, you will realise that you are getting comfortable with the techniques and have evolved into a more conscious and aware rider. At which point, it will be a good time to upgrade to a higher-capacity or middleweight adventure motorcycle like the V-Strom or the Versys. Both offer excellent handling manners and are easy to own with decent service networks in India.

So while entry-level machines will help in mastering the basics of off-roading, these middleweights will allow you to marry horsepower with the skills acquired. And that will open up another dimension to your riding pleasure and learning curve. And there onwards, the cycle repeats as you get comfortable managing a 70+ horsepower machine offroad, you understand how the suspension behaves to your throttle and braking inputs. You get used to the electronic aids and learn how to maximise their benefits to your riding style. An upgrade often brings along better equipment that can be tuned to suit your riding goals. 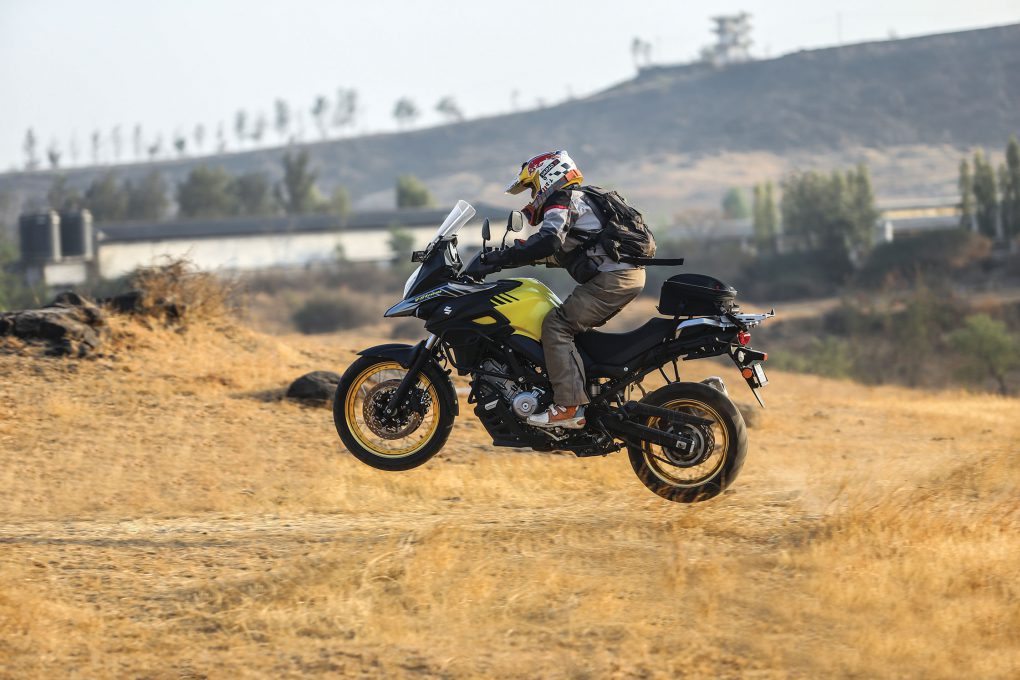 And once you are settled with the middleweights, then the obvious step is to take on the flagship adventure machines and to tick that cross-country ride on the bucket list. As much as it sounds like a long shot, if you manage to spend enough time on the saddle honing your off-road skills, the upgrade from an entry-level adventure machine to a full-fledged tourer won’t be more than two to three years if you keep riding off-road devotedly. Throw in a few riding school lessons and it will quicken up the process significantly. But keep riding, keep learning and most importantly, keep having fun on two wheels. And sometimes on one. 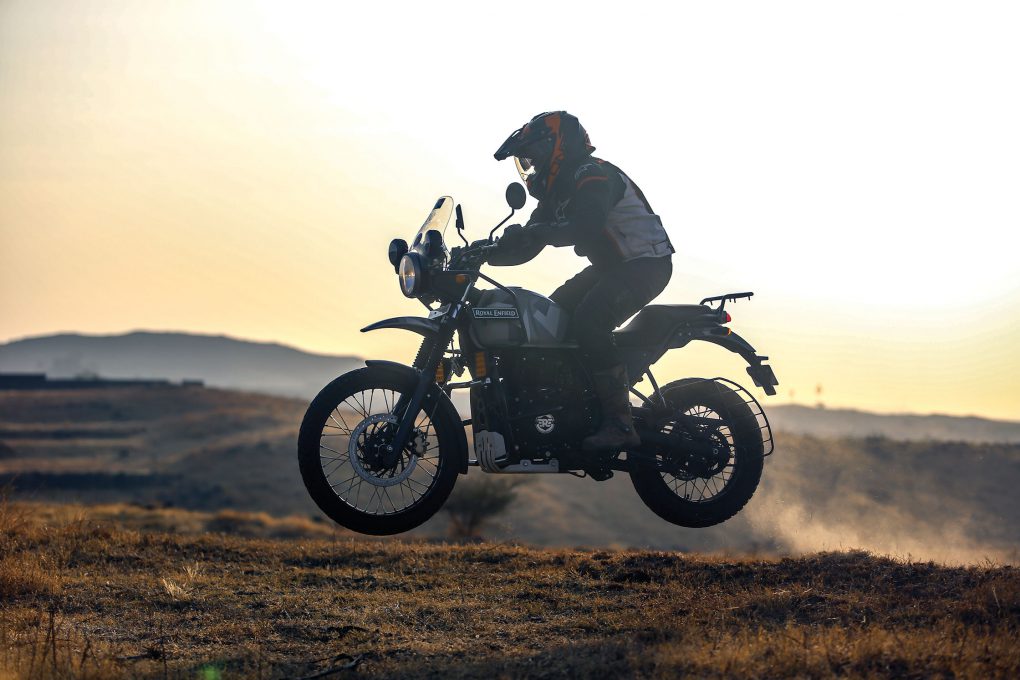 One of the keys for finding good form for off-roading is to keep the arms loose on the motorcycle. The front wheel will skip and slide over loose surfaces, but the trick is to let the front end find traction and to not interrupt it by fighting the handlebars.
By the law of circular motion, a rotating wheel will straighten itself on its own and any rider input interfering with this will unsettle the motorcycle.
The idea of standing on the footpegs is to lower the centre of gravity which helps the bike stay planted at slow speeds while allowing the rider to steer the bike with their thighs.
The thighs help in steering a motorcycle off-road. So holding the fuel tank with the thighs allows the rider to steer it with confidence without unsettling the motorcycle.
It also keeps the upper body free to balance the weight transfer and make necessary corrections  while riding. 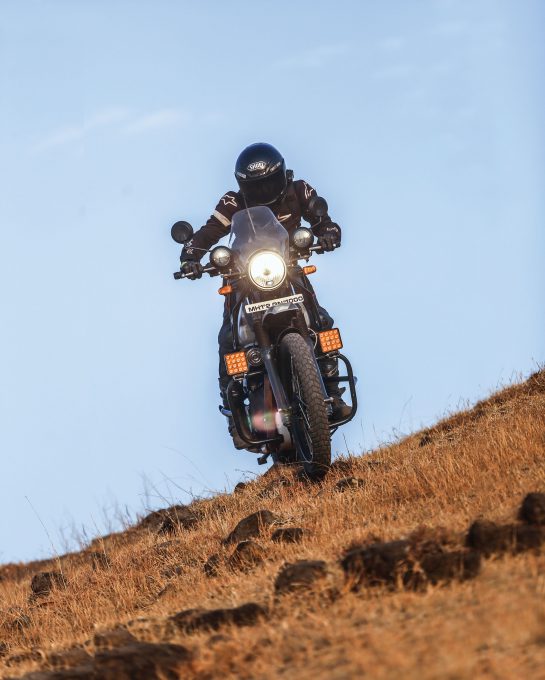 Motorcycle mantra – you look where you want to go! Or you end up going where you look. Not the same thing!
Whether riding off-road or on-road, a riding fundamental is to look ahead in the distance where you want to go and not at the obstacle lying ahead. Looking further up ahead allows one to be ready for obstacles and planning a route around them as well as making corrections if faced with problematic situations.
It isn’t natural for one to commit to the long-distance viewpoint and overlook the immediate road, but with enough practice and conscious effort, it soon becomes second nature. 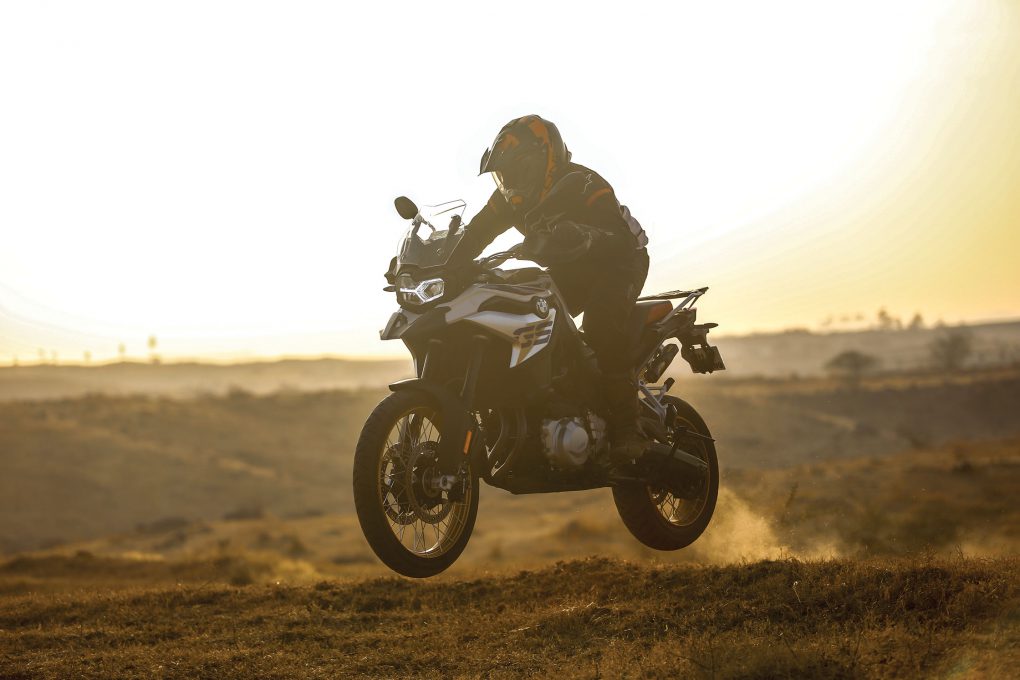 Going over boulders and uncertain rocks means the front end will often misbehave, but the trick is to give steady throttle without any jerky inputs and keep looking at where you want to go.
Keep holding the tank with inner thighs for grip and balance, allowing your arms to be free and loose on the bars. Loose grip on the bars means, instead of fighting the handlebar when the front wheel  acts to surface undulations, you let the front wheel find traction.
Going over bigger boulders or logs, move your body towards the rear seat and transfer the weight onto the rear and feed in more gas. This will make the front end lighter allowing the front wheel to hop over the obstacle with increased ground clearance instead of crawling slowly and scraping the underside of  the motorcycle.