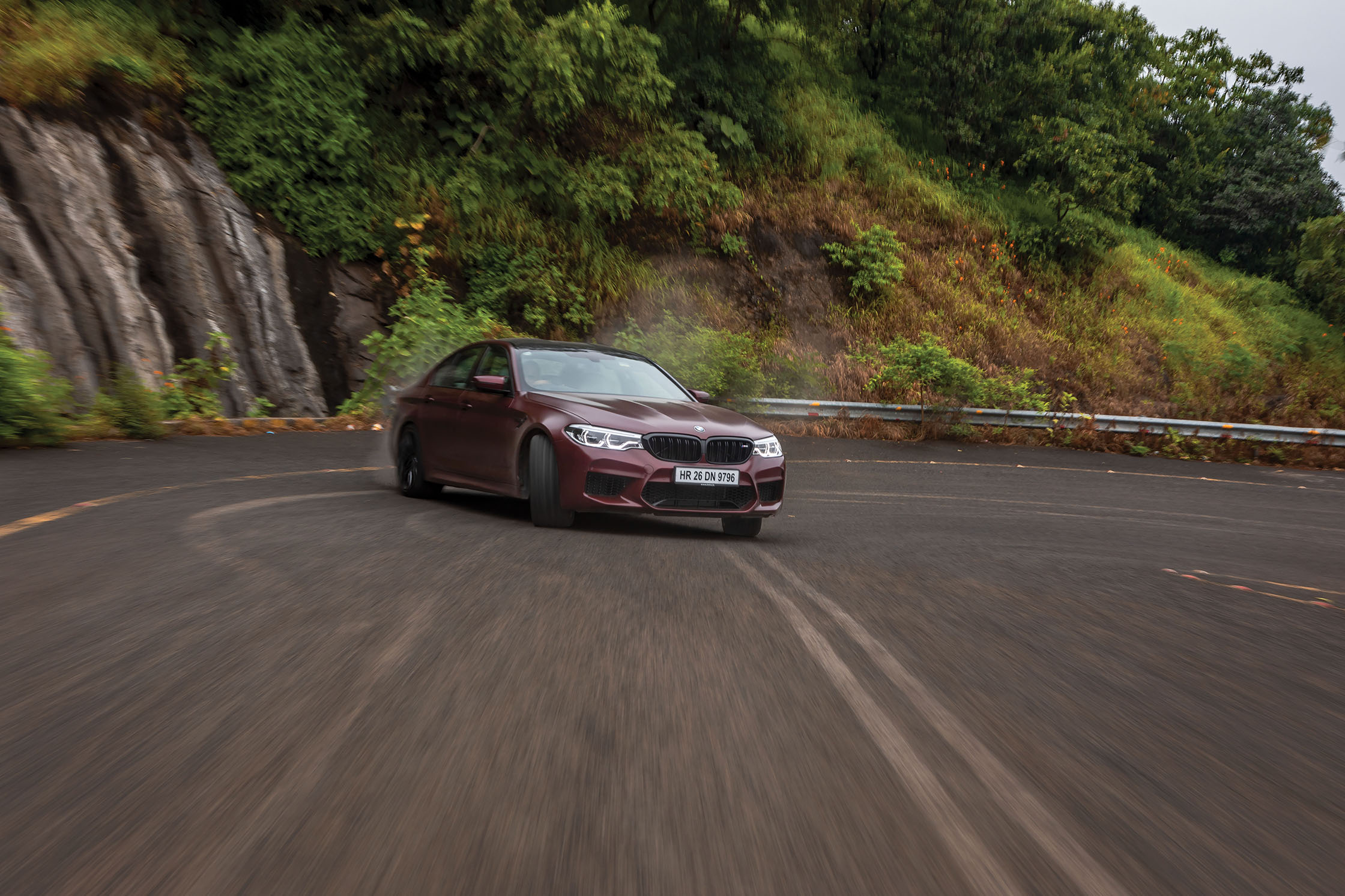 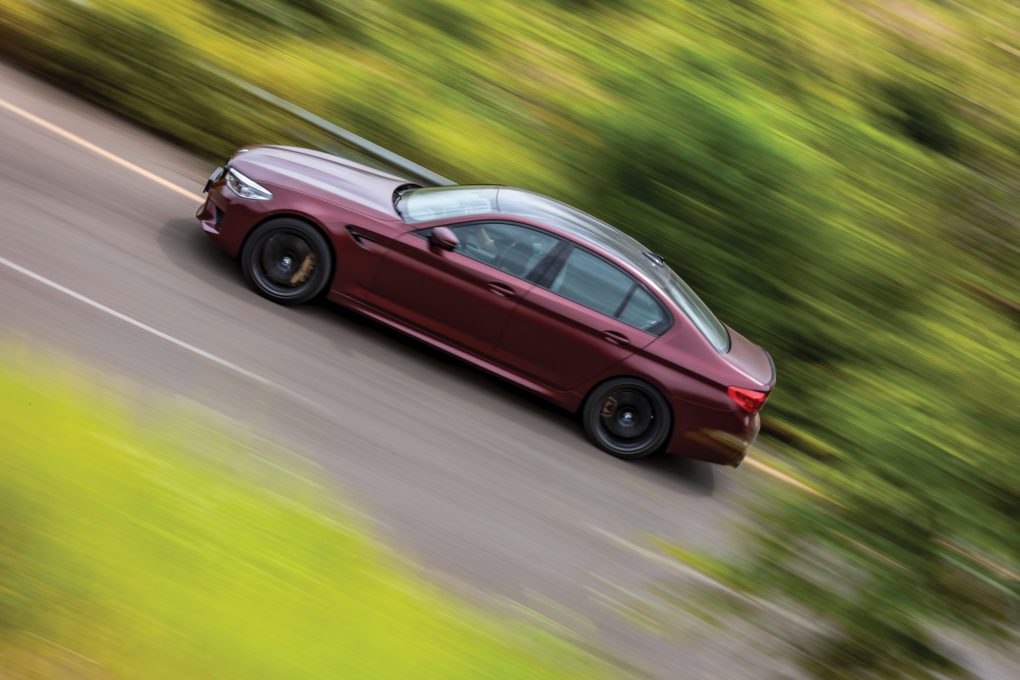 Buckle up. Depress brake. Hold that red start button down for a second, and you’re golden. As the M5 rumbles to life, and the last moments of silence dissipate into a shout, and then a roar, and into a burble that’s omnipresent, you become acutely aware that you’re cocooned, rather seriously, into the business end of things. There’s no joking around here. No signs of playfulness, none of the liberation that comes with laughter. There’s sweat, there’s effort, and there’s always a furrowed brow. There’s definitely no space for a knock-knock joke.
This is how the new F90 M5 greets you. I use the word ‘greets’ rather lightly, but what it feels like is a curt nod. There are very few machines out there that cut through the bulls**t as effectively as the M5. It took me three days of frantic driving to understand that. The M5’s best trait is that it’s got blinders on. It’s so ruthlessly determined, so eager, so dramatic and to the point, that there’s little space for much else. The thing is, it’s also its worst trait. You can see how hard it’s trying from the moment you step in. The unnecessarily complicated gear-lever, the shouty red stubs sticking out from behind the steering boss, even the fonts used for the instrument binnacle. It’s all very… taut.

I’d like to be crystal clear at this point, lest I get misinterpreted. I’m not saying any of this is a bad thing. I actually think it’s a breath of fresh air. God knows we have enough cars on the road trying to do it all. So when the M5 came along, I actually lauded and appreciated the fact that it had a personality. A soul, if you will. So what if it’s hardened, set in its ways, and as far from malleable as can be? It’s these very traits that blow you away from the moment you grip the steering and flex your right foot.

The M5 is phenomenal. I’m not concerned even if your last name is Balboni; what the M5 will do is leave you stunned at what 4.4 litres and a set of turbos can do. I’m not even concerned about the numbers, however frightfully impressive they are. You find a piece of road — any road — aim, and hold on. And if you’re dissatisfied, adjust how quick the steering reacts, how firm the suspension is, how quick the gears shift — it’s all there, waiting for your input, at the push of a button. It’s frightful just how quickly it gets to speeds that would render you a blur by passers-by. In fact, BMW didn’t go down the dual-clutch route for the gearbox for a reason. The M5 makes so much torque that a torque converter was the preferred option because it’s a lot more tolerant towards abuse. I like that line of thinking.

The more I think of it, the more it makes sense. BMW’s approach with the F90 M5 screams aggressiveness whichever way you look at it. Everything I’ve mentioned so far highlights that. When I turned it down five notches or so, it did what it was told beautifully, but I couldn’t help but feel that it felt mistreated. ‘Do your thing. I’ll abide. But the moment you get a chance…’ is what it’s cautiously muttering all through the restraint. Sooner rather than later, though, there will come a point when you’ll snap and give in, after which the cards are off the table.
See that shot of the M5 power sliding its way into my cameraman’s focus? That wasn’t easy. I’m not pointing the blame at the 1855 kg it’s hurling through a corner here, and neither am I saying that the rear-wheel-drive isn’t as effective as it should be. Sure, it’s easy to kick the rear out, but containing the M5’s eagerness is a job-and-a-half. It’s hardly as simple as dialing in the right mode, gassing it and smiling for the camera. You have to wrestle it into submission. You have to (pardon the cliche) tame it. It’s not out of control, but it sure as hell makes you work for the glory shots. That’s the thing, though, isn’t it? Get it wrong, and the M5 is the worst thing to have around. Get it right and, well, truth be told, it’s hardly that satisfying because you’re just goaded into trying it again. This time with a touch more precision, a tad faster, and a whole lot more concentration. It’s never-ending with the M5.

I haven’t been in a car that makes you want to work this hard. Strictly speaking, a machine that makes you want to work harder is an antithesis, but that doesn’t stop the M5 from making you feel just that. The drive to bigger, better things is always there, and after a quick change of tyres, it’s on to even bigger and better. Where am I going with this? Confusingly enough, I don’t know. There’s a degree of shame I have in not being able to convey exactly what the new F90 M5 is about, I admit. Every story I’ve written, even if the car’s been dubiously dull, I’ve always managed to drone on to a conclusion of sorts. Then again, the BMW M5 isn’t quite like every other car.

An expressway run, for instance, was the first time I fiddled with the steering. So far, I’d stuck to Comfort, but a quick shift to Sport Plus weighed everything up just the right amount. It’s not hydraulically assisted, but it’s scarcely believable just how good the feedback is from the tarmac and the wheels. I almost felt like switching back to Comfort. Too much of a good thing and all that… and as much as I love my cars sideways, I’ll be the first to admit that the F90 needed the four-wheel-drive system. Sure, it works primarily as a rear-wheel-drive car, with the power being sent to all four only when it senses that traction’s in short supply, but the lunacy of the machine in two-wheel-drive mode is something, I fear, only ridiculously good racing drivers will be able to harness on a regular basis. Tempted though I was, I just couldn’t muster up the courage to keep it in rear-drive-only throughout my drive. It is thoroughly, solidly impressive, that four-wheel-drive system. And thoroughly, solidly required, might I add.

I was afraid of the system initially, I must add. Four-wheel-drive? In an M? Wasn’t it enough that Porsches now had turbos, that SUVs were now a serious consideration for carmakers like Lamborghini and Rolls-Royce, and that the Kardashians somehow had their own TV show? I’m convinced now, though. I get it. It’s manic unlike any other previous M5, and it’s got its own scene that needs tending to. My favourite M of the lot? Not quite. I haven’t had a go in the M2 Competition, and I suspect that that’d be the pick (because why wouldn’t it?), but for now that title, for me, goes to the M4. It’s a lot more eager and there’s time to catch your breath in it, to have a look around, and probably appreciate it a lot more. There’s a serious peculiarity to the M5, though, that’s seriously unique to its position. It’s worryingly good, but it doesn’t let you revel in just how good it is.

There are very few machines out there that cut through the bulls**t as effectively as the M5.

I haven’t encountered too many cars like this, if at all, but there isn’t a moment of regret in me since the time I saw it go back to its owner. Call me crazy, but even when you factor in the near-Rs 1.5 crore tag around its neck, you can’t help but feel that it makes sense. It really, honestly does. Confused? Call me Bailey and slap me silly, because so am I. 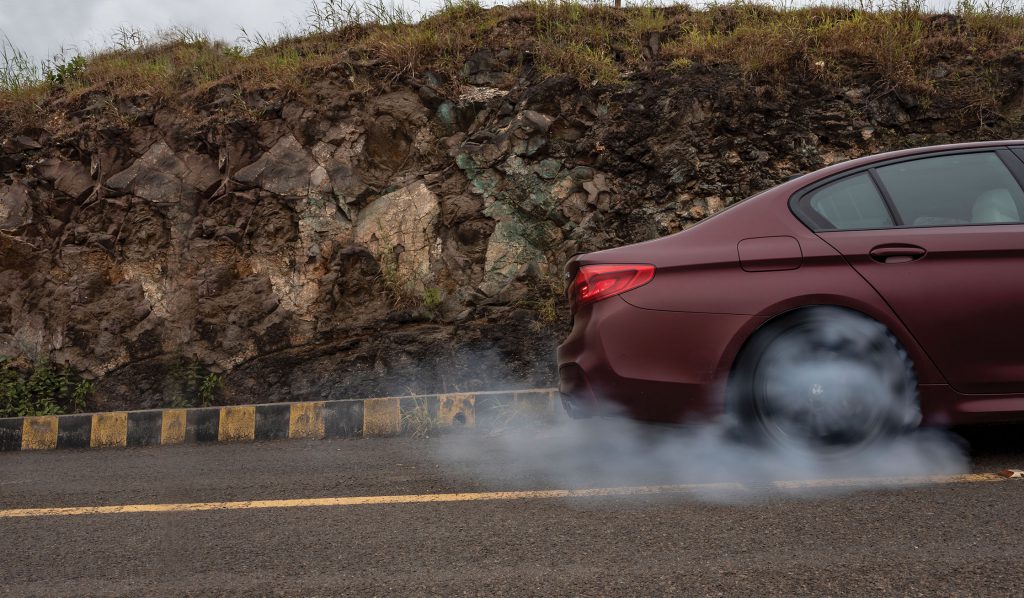