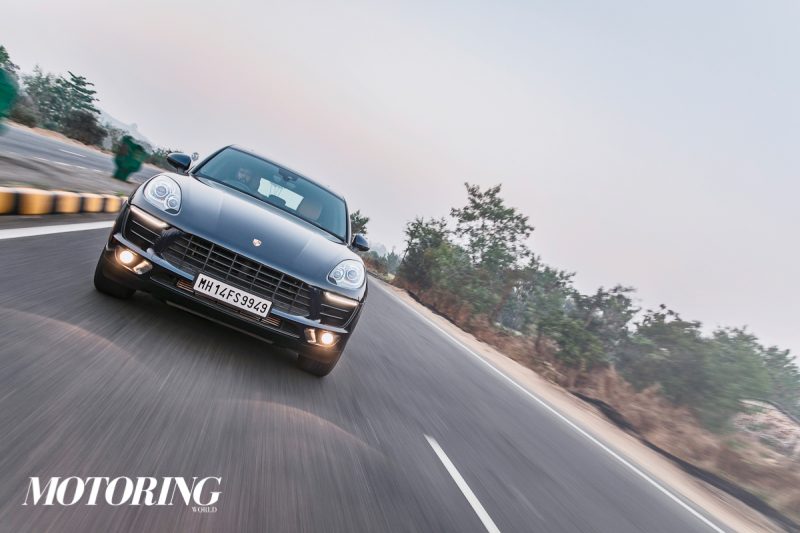 It’s a Porsche with an ‘R’ suffix, which means it’s one driver-orientated, special edition, and (if we look at the latest R’s residuals) a future classic. Only that it’s not. Instead, the Macan R4 is more of a thinking man’s Porsche. It’s the least expensive one you can buy in India, and at the same time it’s one of the best mini-SUV packages on the market. But why would the discerning SUV buyer take it seriously, given your brain might make you believe it’s more of a VAG/Audi underneath: a bit boring, if you will? Only that it’s not.

Let us start with the looks. There’s a lot to like about the Macan. The smaller-than-Cayenne proportions work well; it’s sporty, but has enough curves to ensure the design is likeable, even after multiple glances, repeatedly, over days and months… but given that it sits below every other Porsche in the line-up means there have been certain exclusions. Look at the 18-inch wheels, for instance. They look straight out of the type-987 Cayman’s catalogue, which is not bad by any means, but aren’t they a bit too small? Even when lowered (oh yes, it doesn’t miss out on Porsche essentials like adaptive suspension), there’s quite some wheel gap. It’s not an issue a correct tick while specifying your Macan can’t solve, so let’s move on.

If you’re expecting to feel shortchanged once inside the plush cabin of the Macan, then look away, would you, please? It’s every bit as special that a Porsche should be, and bereft of a Rs 1 crore+ price tag, it doesn’t make the Macan R4 any less a Porsche. Once aboard, Raunak couldn’t help but gawk at the centre console, which, with its meaningful (and not gimmicky) plethora of buttons, requires one to be be in total awe. Safe to say, none of it detracts from the driving experience that the Macan has to offer — despite having no flat-six, fewer cylinders in a ‘wrong’ arrangement, and power (lots of it) being sent to all four wheels.

The 2.0-litre engine makes 248 bhp and 37.7 kgm, which might not make it a match for the more powerful Turbo or the GTS (which India doesn’t get) but it’s not just about the performance figures. The 7-speed PDK transmission is easily one of the best out there, both in the way it shifts and with the ferocity it does so. One aspect where the Macan shines is the way it drives; the chassis is stiff, unobtrusively so. Unlike in sportscars, where you have to worry about bad roads, the Macan’s suspension glides over all of it, without really detracting from a sportscar-like experience elsewhere.

I won’t go as far in saying that the vehicle ‘shrink-wraps around you’ because it doesn’t. Albeit small in size (for a crossover SUV), the Macan still sits tall, so there is some lateral movement when cornering. Having said that, it’s equally easy to carry higher speeds into and out of corners. The all-wheel drive system’s assurance doesn’t take a back-seat ever, so you know that, apart from the electronic nannies, there’s a safety net of mechanical grip, keeping it all in control. It gives you the kind of confidence you would need to enjoy a Porsche to the fullest.

And more so because the engine, despite not being close to the idea of Porsche, works so bloody well, that you wouldn’t bat an eyelid, if you were told that it was straight out of a ‘more Porsche’ Porsche. At 2.0 litres in displacement, it’s certainly not the heaviest of units that have graced the Macan’s engine bay — so there’s no ruining the weight balance. And there’s a lot of character in the engine itself. To start with, the induction and exhaust note both give away that it’s an inline four, but won’t you love the noise! Then there’s the way it delivers power — since it’s turbo-ed, there’s clean power delivery starting from about 2000 rpm. It eventually tapers off, but with that ace of a gearbox, you’re never really out of power — be it gentle cruising or doing what Porsches are meant to do: enjoying every ounce of performance.

The Macan, then, in a nutshell, is something like the transaxle Porsches of the past (which just celebrated their 40th anniversary): not exactly a 911-killer — far from it — but a great product in itself. It just requires you to have a different approach when you look at it. There’s the practicality aspect covered — possibly better than other Porsches bar the Cayenne. And it doesn’t fall short of being as desirable as any other Stuttgart-produced car. But where it shines, almost impeccably, is the way it drives. It would be a disservice to the verdict if I go on another paragraph-long description about that, but it has to be said that the Macan R4 can very much satiate the desire to drive and own a Porsche, without having to empty your rather humungous bank account.

And as I go to drop the keys of ‘my’ Macan in the hands of its chaperone, my brain — call it defence mechanism — begins to tell me that it’s not Porsche-enough to be in love with. With all the Audi/VW bits underneath, I’m sure I am not being fooled by those cheeky little grey cells, but what on earth is ‘Porsche enough’? It’s a dynamic definition — one that changes with time. And for all I know, the Macan R4 excels in keeping the one in the driver’s seat happy. The passengers meanwhile get a comfortable ride, and the views from the windscreen aren’t bad enough — especially when you can feel the Macan cornering almost flat, where others are struggling either for grip or for better body control. And if you get bored of that, the nice touchscreen infotainment system can keep you happy for hours. Until you take a break, only to realise that life’s so much better when you’re on the move. And more so in a well-behaved Porsche.

Okay, now can someone put a flat-six into this thing? Asking for a  friend, obviously.