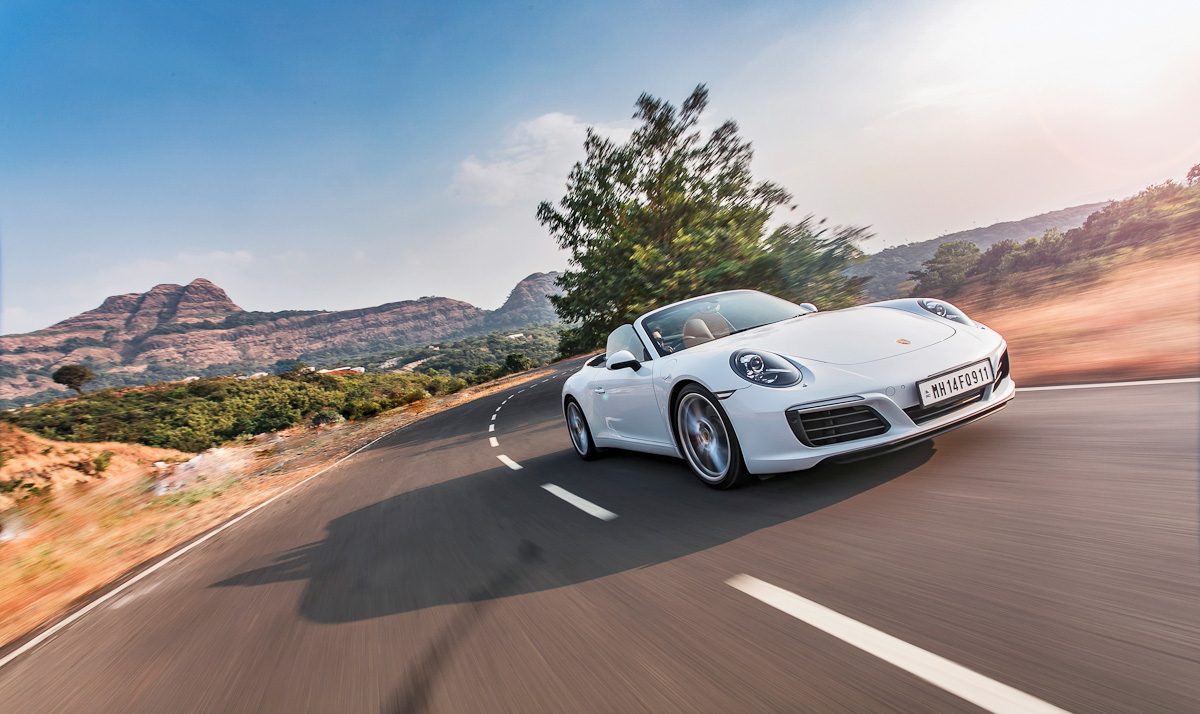 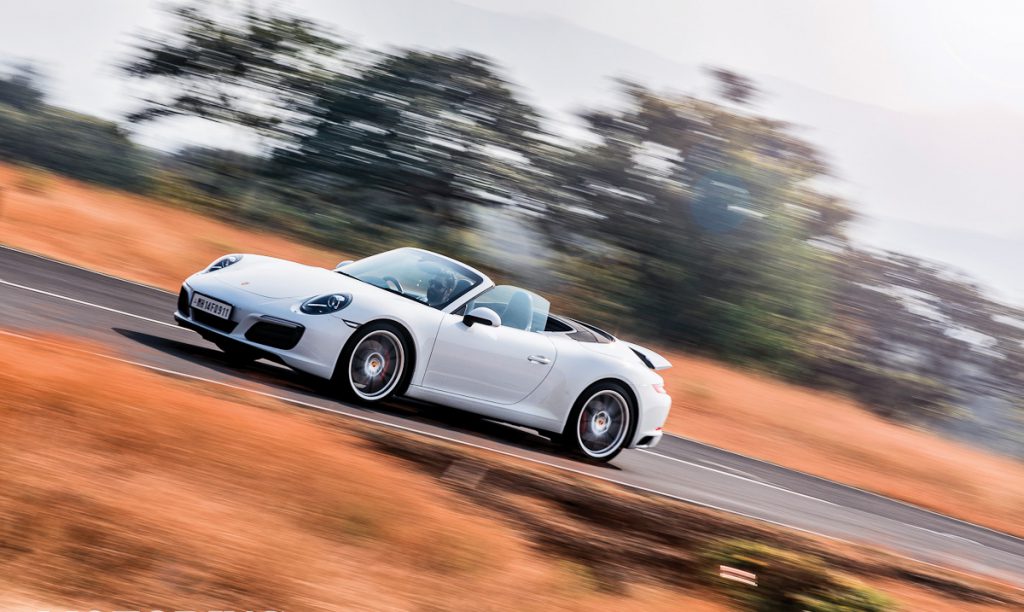 The Victorinox Swiss Army Knife is the best example of one tool doing nearly everything. From uncorking a wine bottle to sawing a log of wood to picking the remains of dinner from one’s teeth, the Swiss Army knife is the tool to have. Motorcycles and cars have been trying to do the same for a while now — to be jacks of all trades and masters of them, too. Nowadays, most high-spec bikes and cars come off the showroom floor with electronically-created power modes to choose from. City modes provide just the right amount of power to keep the milk from turning to curd on the way back from the shops, while sport modes allow the motor to squeeze out as much juice as it has to offer. This is a good thing in some ways, because you save on garage space by not needing to have a different car or motorcycle for a different application. At least for some of us, this holds true. That, however, is a different story altogether for a different time.

With true-blooded sportscars, however, it has always been about all or nothing. You either clench your backside, grimace and bear the harsh ride quality or you buy an E-Class instead. The air-con should be only sufficient to cool the louvers it blows out from as beads of sweat rolling down your brow only serve to heighten the sensory experience of driving a car built for performance. And boot space is just about adequate to store a handkerchief to dab that sweat away. Of course, you pay top dollar for the whole package.

While the world stares at you go by with jealous eyes, you alone know how badly you want to trade places with the guy who is being chauffeured around in the Uber in front, while traffic crawls along Mumbai’s abundantly potholed Andheri-Kurla road. Onlookers mistake your expression as a sign of pride and a false sense of entitlement. In reality, you are about to cry out in pain and are just hoping that you get into the privacy of the parking lot of your swanky apartment block before the tears roll down your cheeks. In short, living with a sportscar is like owning a thoroughbred race horse. Nothing beats it on the racetrack. Everywhere else, nothing could be worse to drive. Until you get a Porsche 911 to grace your garage, that is.

This car pretty much wrote the recipe for how a sportscar ought to be made all of 53 years ago. And that recipe was so delicious that the 911 is still around, albeit suitably tweaked and fattened up to as it squats on the road today. It’s still one of the forerunners in its segment and the 2016 911 Carrera S Cabriolet is no different. The Carrera S is pretty much the Swiss Army knife of the sportscar world. Coupling latest electronic technology with the typical precision engineering that the Germans are renowned for, the Porsche 911 strives to do whatever you want it to do wherever you want it to do it in. 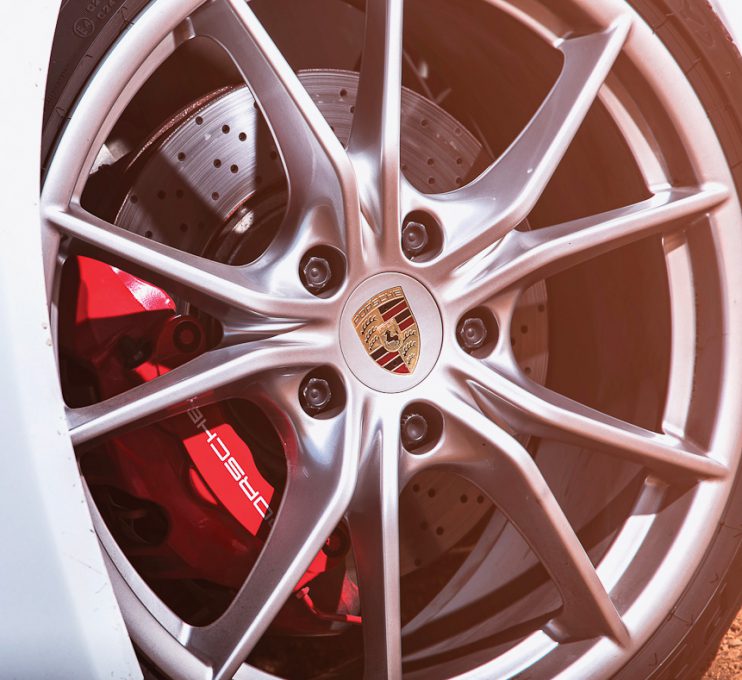 Take negotiating Mumbai’s famous speed breakers, for example. The Egyptians built their mighty pyramids thousands of years ago, but we’re still struggling to build consistently-shaped mounds of tarmac. With the Porsche able to lift its front suspension with the touch of a button on the central console, grazing the undercarriage on all but the worst humps is a thing reserved for other sportscars. 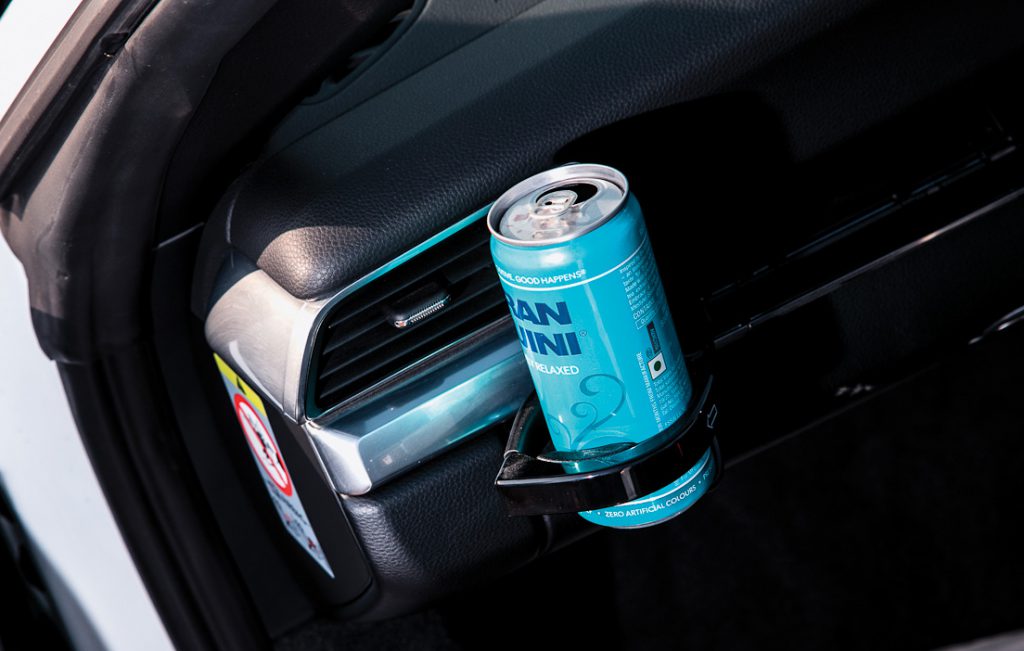 Another trait of the Porsche 911 that is unlike most other cars of its ilk is its interior. Slither into the Porsche and you will find ample room for the driver and the person calling shotgun. However, the 911 is a sportscar, and the way the driver’s seat’s contours try to grasp your back from all sides to keep you from wallowing about whilst attacking corners could get uncomfortable for those like me who are as wide as we are tall. 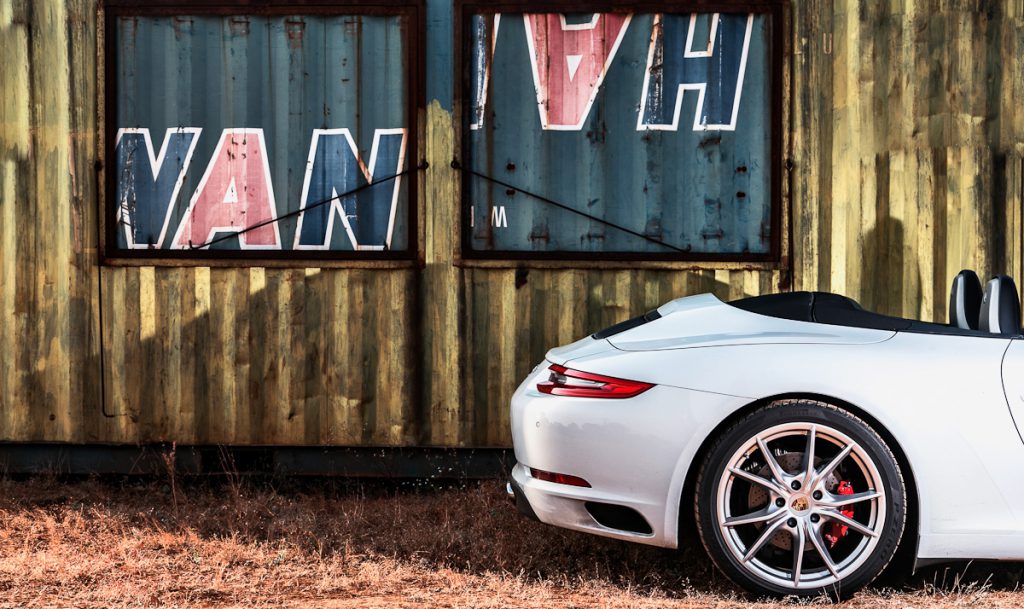 At the back, the seats will actually hold two children (or a couple of 40-year-old ‘little people’ — who am I to decide) comfortably without having to sever their limbs to get them in there. The air-conditioning, I am happy to note, works. And by that I mean that it actually cools the cabin down well enough to keep me from sitting in a pool of perspiration whilst negotiating roads packed thick with BEST buses, trucks and rickshaws that seem to be attracted to the white 911 like moths to an incandescent light bulb. 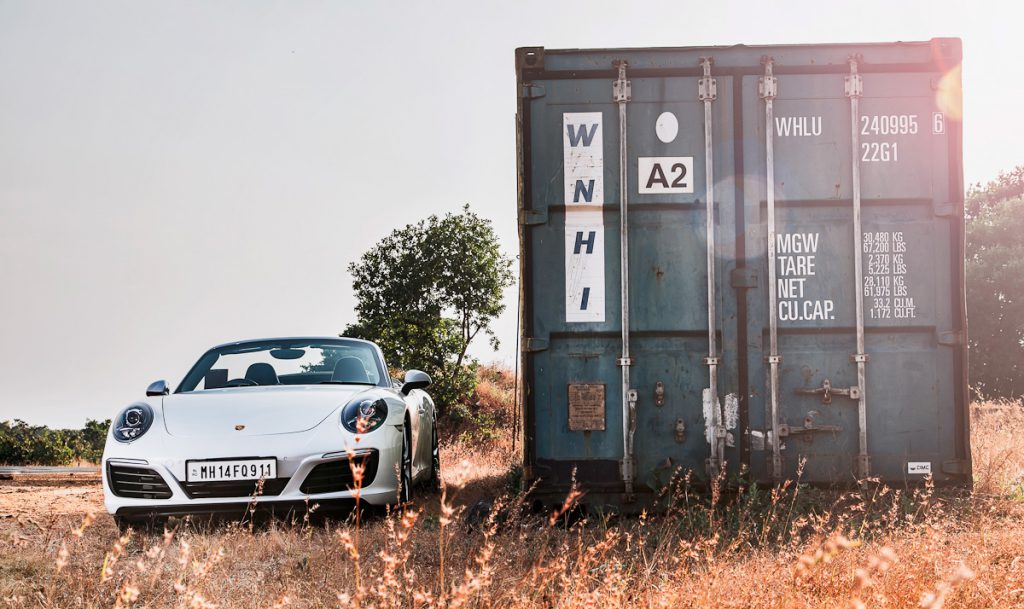 So the Porsche shows off its roomy interiors and relative abundance of creature comforts. But the proof of the pudding of any sportscar is how much ‘sports’ is actually in the ‘car’. And in the 911, I am happy to report, there’s plenty to go around and then some. Kick the throttle towards the firewall and, well, you can almost hear crickets. After what seems like eternity, which in reality is just a few milliseconds, the 370-bhp, 46-kgm boxer motor bursts into its song and pins me into the seat. Till I see an idiot in one of those slow commercial vehicles straddling the fast lane, chugging along at 40 kph. 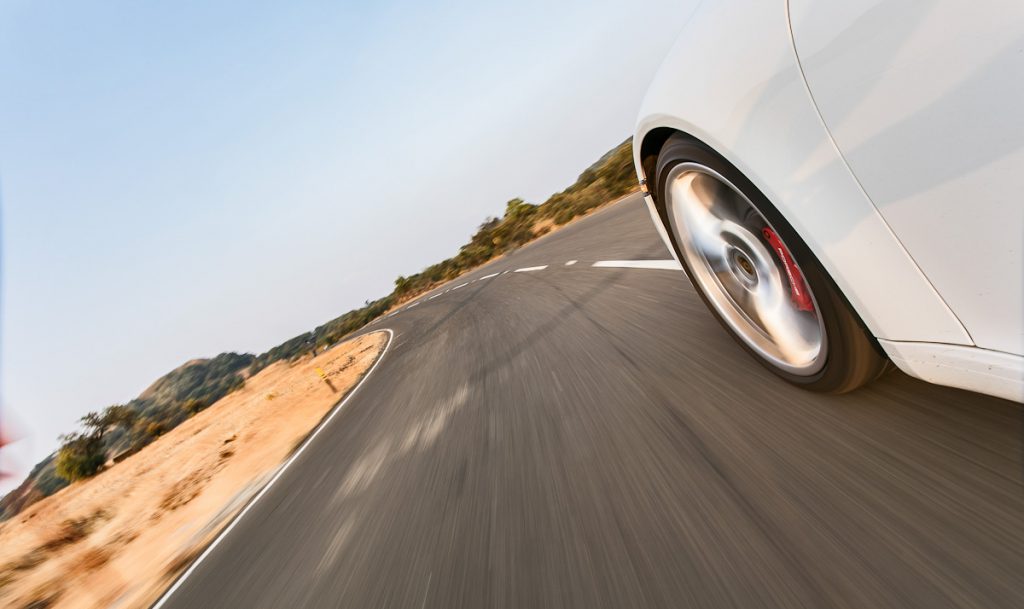 I brake, drop a couple of gears in the PDK transmission through the paddle shifter on the left, avoid the aforementioned nincompoop, and then plug the go-faster pedal down once again. I do this all morning, never once getting tired of it. As the road begins to climb, the curves come into sight. It is one thing to go fast in a straight line and quite another to go fast around a corner. Ask any old American muscle car owner that and he’ll vouch for that fact! Choose your exit point and the 911 gets you there with minimal fuss. The tyres bite the tarmac like hungry pit bulls and the suspension keeps the car planted and tracking true throughout the manoeuvre. 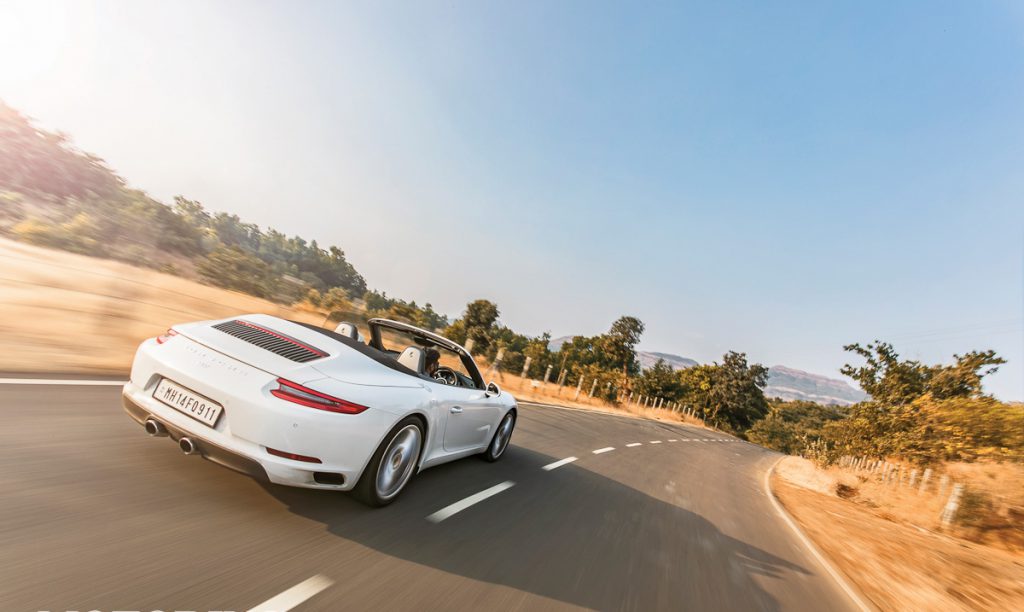 Although the car tracks true and obeys every input you put into the steering wheel, the wheel itself didn’t quite feel like it was really part of a seamless, mechanical connection to the tyres. Despite being a googly-eyed fanboy of the venerable ‘whale tail’ 930, I am no Porsche expert and this peculiar steering feel baffled me. A bit of research revealed that it has been quite awhile since the 911 has had to make do with an electric steering system and the answer was suddenly clear as day. I wouldn’t say that the steering feel of the Carrera S is terrible or anything of that sort, because it certainly isn’t. I do however opine that its electric steering system does not feel as fluid as a hydraulic one. Pardon the pun. 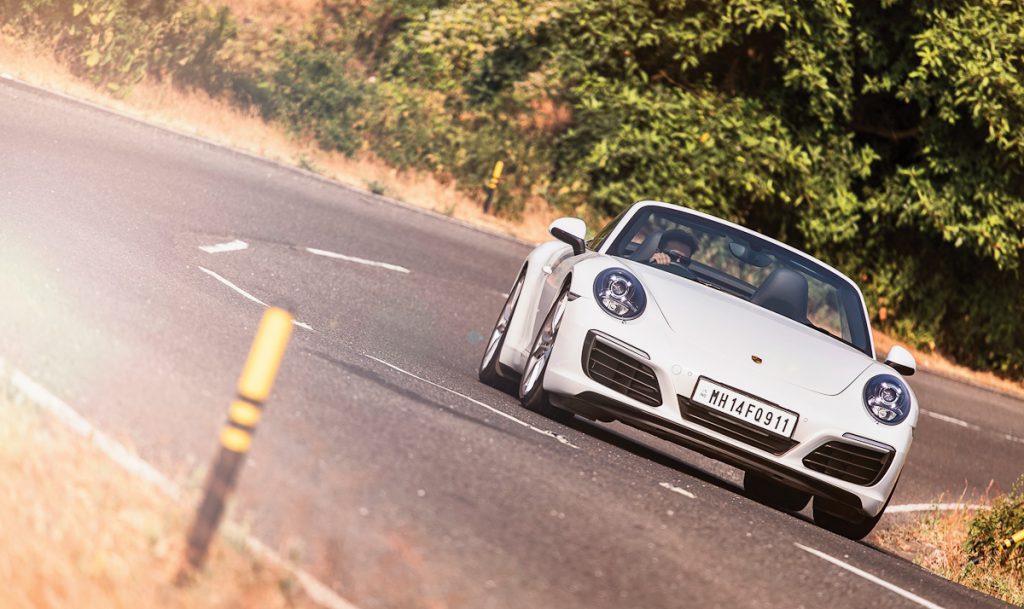 Before I know it, the curves have given way to the boring straights again. But luckily, the traffic has thinned out, all thanks to overloaded trucks slowing everybody else down. I don’t have a Vbox strapped on, but that won’t stop me from seeing how fast this 911 will go. And go she certainly did, with a cursory glance revealing 249 kph showing on the digital speedo. The 911 still had plenty of steam to go faster, and the top whack of 292 kph as claimed by Porsche is very, very believable. What is hard to believe is that the car is still in ‘Normal’ mode, which begs the question, why would anyone want anything more? 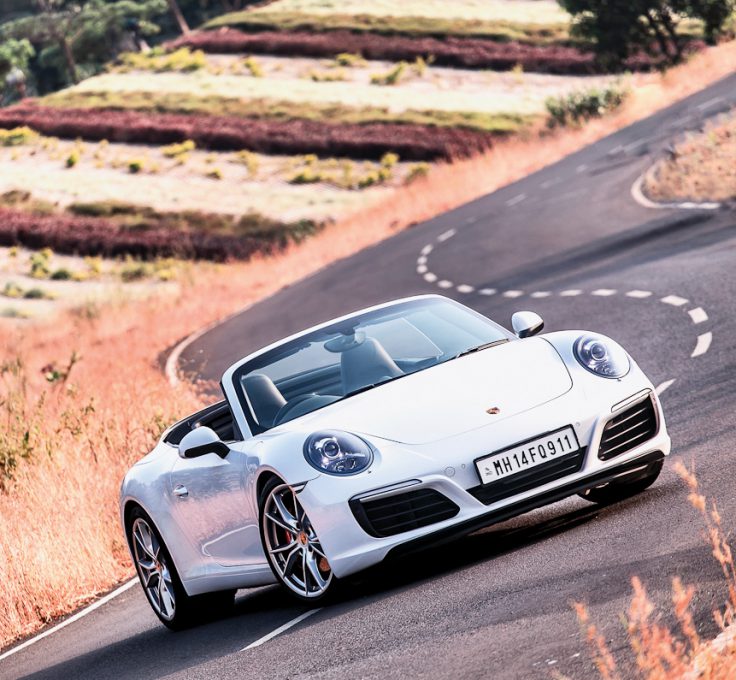 Well, simply because more is always better, and as part of the Sports Chrono optional package that this particular Carrera S is shod with, there’s a discreet knob located just below the right spoke of the steering wheel. ‘O’ is Porsche speak for normal, and is the mode you could select for getting about town and quick blasts down the highway. It’s not slow, just slower in a relative sense. 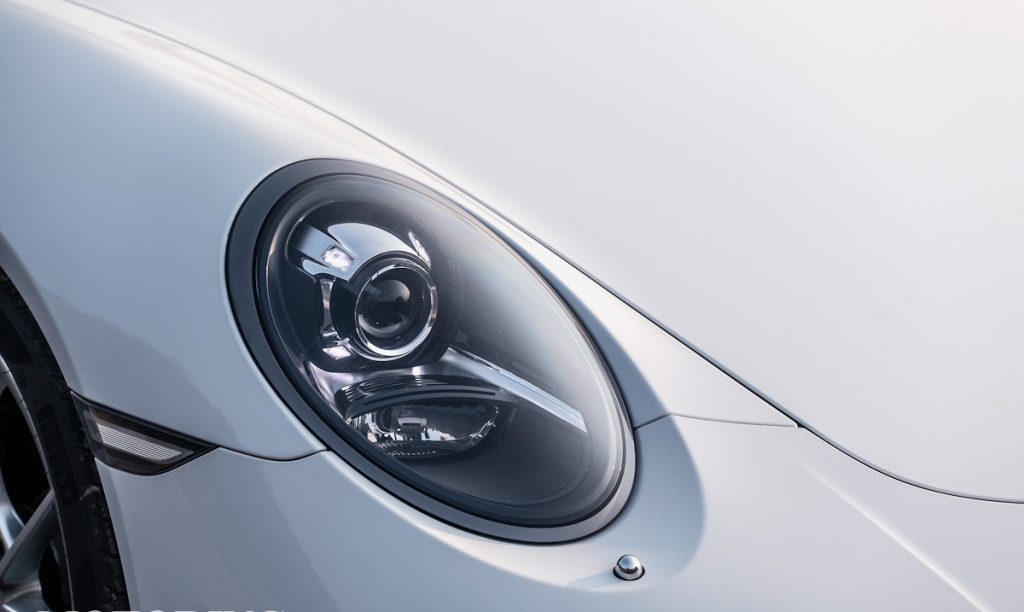 Turn that knob clockwise one notch and you’ll find yourself in the ‘Sport’ mode, with the throttle response getting slightly heightened, the suspension gets tauter and the sports exhaust (another optional extra) opens up. Another turn of the knob transforms the 911 into a teleportation device. But Porsche, rather modestly, calls it the ‘Sport +’ mode instead. This mode changes the throttle mapping and allows the engine to rev even higher before the PDK transmission upshifts into another gear. 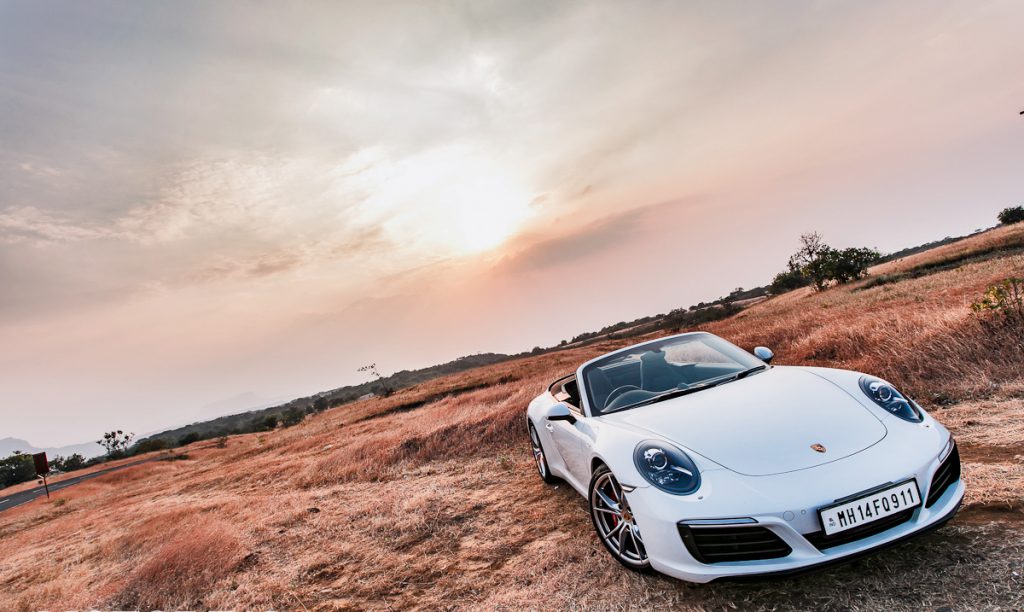 There’s one more turn in the knob that engages the ‘Individual’ mode which allows you to tune the car’s settings according to your own preferences. I honestly didn’t bother doing that because I was having too much fun jabbing that little black button located in the centre of the Sports Chrono dial. The tiny black Sport Response button that seems to teleport all of hell’s fury, for all of 20 seconds, straight into the combustion chambers of that flat-six tucked in at the rear. I must admit that it does appear gimmicky, with the 20-second countdown appearing on the instrument console, but this is the most expensive cheap thrill you can have in a car by far! 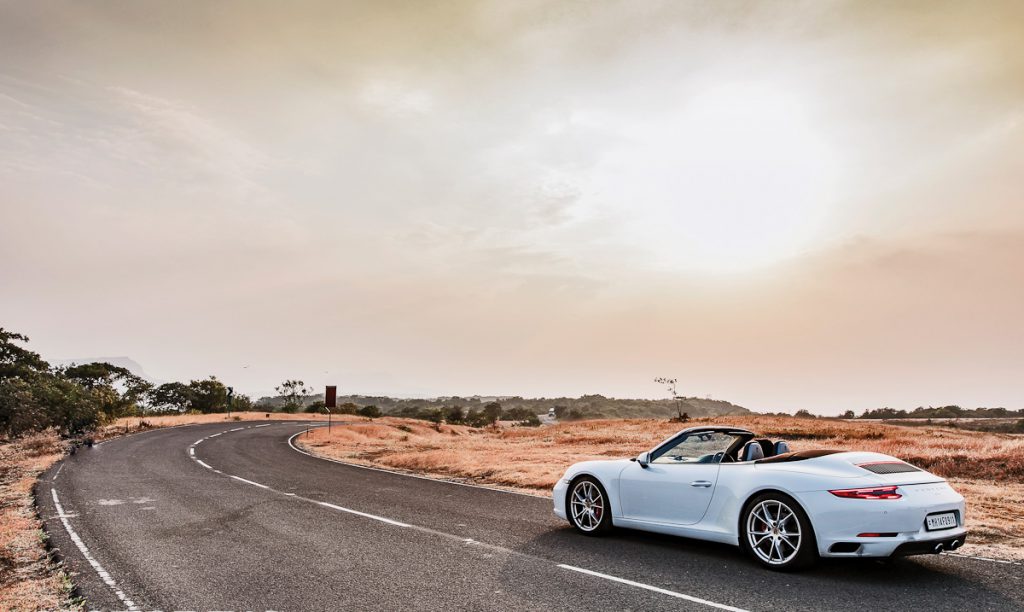 The Porsche 911 Carrera S Cabriolet is a paradox of sorts. It defies the boundaries of what a sportscar should be like in terms of versatility and at the same time, still manages to feel like a pucca sportscar when you want it to. If there ever was a need for one sportscar to do it all, the Porsche 911 would pretty much be it. It seems that adage ‘horses for courses’ doesn’t hold good for certain black stallions from Stuttgart!