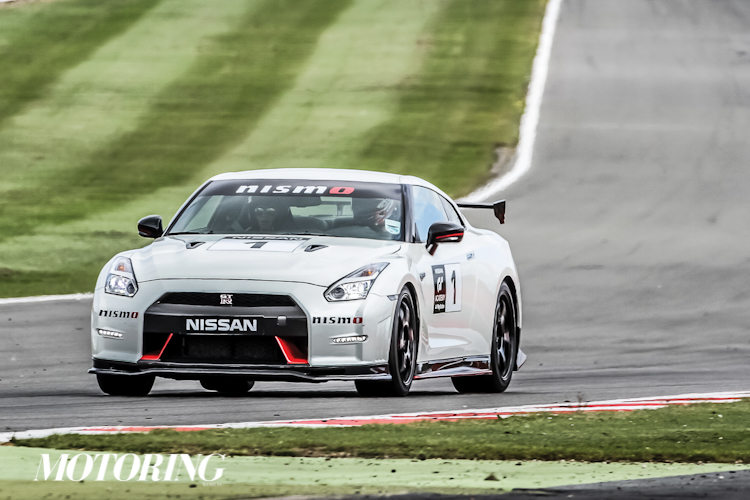 Paul Walker was a hero to many. To some because he didn’t just drive cars in the Fast and the Furious series of movies, he also raced them in real life. To us, though, he endeared himself because of his choice of car: in the second movie, he picks an R34 Skyline GT-R as his ride, complete with right-hand drive and a manual gearbox (yes, the Americans really do think the ability to operate a manual gearbox is amazing). The GT-R I have before me is different. It isn’t called a Skyline any more, because that is a name reserved for a large family sedan. It isn’t right-hand drive and neither does it have a manual gearbox. What remains, though, is the sense of awe around this car. It remains as jaw-dropping as before.

I’ve never driven a GT-R before. In fact, I’ve never even touched one. The thought of driving one at the birthplace of motorsport is an intimidating one, to say the least. Then again, I’ve been given a taxi ride in a NISMO GT-R not an hour before, and I’ve been around the Silverstone Stowe circuit in a NISMO 370Z just before, so it can’t be all that hard to handle a GT-R, can it? I approach the car and immediately I’m all thumbs. I can’t find the way to open the door or the buttons to adjust the seat and I cannot find the seat belt’s buckle. This has most certainly not begun well. With a little help from the instructor sitting beside me, I adjust the seat the best I can (although I can’t get low enough to stop my helmeted head from touching the roof), say a prayer, slot the lever in ‘D’ and off we go.

The 2015 GT-R is a slightly different model than the one that was launched in end-2007. It is the second refresh of the model and the price has crept upward, but along with the increased price, refinements have come along for the ride. There’s new spring rates, revalved shocks, a softer front anti-roll bar and bushings that are softer for vertical movement. There’s new tyres as well — the same Dunlop Sport Maxx ones but with stiffer sidewalls. None of this makes sense out on a racetrack, because there aren’t any broken bits of road that the suspension has to cope with. It should be a marked improvement in a country like India, though.

The driveline remains the same — 543 bhp from 3.8 litres and six cylinders, helped by two turbochargers and all the wheels get power from the 6-speed dual-clutch gearbox. Yes, it is only six speeds because ‘the car doesn’t need any more’ — a 0-100 kph time of under 3 seconds and a top speed just over 315 kph is testament to that fact. There are a few cosmetic changes, but the only one that is noticeable is the new LED headlamps that are adaptive. They adjust for speed as well as steering angle, helping light up the bits of road that are most important.
Out on the track, and I’m immediately struck by how quickly the GT-R goes up through the gears. It certainly doesn’t feel like its portly 1779 kg under acceleration, this! A couple of tricky corners later, we’re hammering down the Hangar straight and I can give the GT-R its head; 180… 200… 220… I brake hard into Stowe corner and for the first time in my life feel a steering wheel squirm under hard braking. I clench my ample buttocks and invoke the names of whatever gods I can bring to mind while wondering if I can file a story for Motoring World from prison, for that’s where I imagine I’ll end up, should I crash (maybe the prison will have fewer websites blocked than the office, but that’s a story for another day). However, the only god that matters here — Godzilla — takes all this into its stride, hauling its weight down to the correct entry speed and turning in with a sharpness that surprises me.

One session over, I stumble out of the car (couldn’t find the damn door handle on the inside, either) feeling slightly dazed. No road car should be this good — at least, the ones that look like they cost a whole lot more. And they do cost a whole lot more as well. The second session only reinforced my faith in the GT-R’s crushing abilities and I learned to let the driveline work out the grip for itself. I ended up shooting out of corners faster than a person standing at the door of a train pulling into Andheri station  at 8 a.m.

Paul Walker, wherever he is, is probably sitting at the wheel of a GT-R and smiling to himself, because there are few places that can be heaven — and the driver’s seat of a GT-R at Silverstone is definitely one of them.