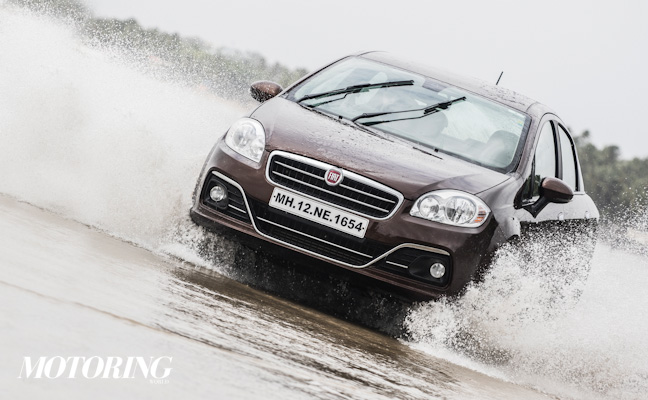 There’s something to be said about Fiat’s prospects in India. There’s so much promise surrounding each and every one of its cars, and it’s all done away with because of tiny yet consequential details here and there. If I can draw a parallel, I’d liken Fiat to Italian racer Teo Fabi who, during his 64-race F1 career, scored all of three pole positions, but he has the distinction of never having led even a single lap. Cruel fate, indeed, and it seems like Fiat, in India at least, seems to be suffering the same kind of there-but-not-really-there fate.

Its new Linea 125 S is, I’m positively not delighted to say, more of the same. The highlight of this update is the 1.4-litre T-Jet engine that’s been tuned to put out 11 bhp more than the earlier one. The thing is, though, that the Linea keeps playing ping-pong when it comes to its good and bad bits. Find two good bits and I’m sure you can follow that up with two bad ones.

Take the engine, for instance. The extra power makes so much of a difference. On the move, lower down the rev range things are a bit slow, but keep at it and there’s so much of power to lean on. It’s not Punto Abarth-esque, but the power’s abundantly apparent and it sounds so sweet when you rev the pants off it. But then you slot it into another gear. Sorry, let me rephrase that. You attempt to slot it into what feels like a designated slot for the gear you want. The shifts are so rubbery that Bridgestone should probably think of cashing in on some gearbox branding opportunities with Fiat.

Then there’s the way it drives. It has a hydraulic steering and you don’t need to drive it to tell that it’s going to be good. It’s so much fun to chuck it around corners because body roll is kept in check and, aside from a bit of understeer when you push it too hard, it’s reasonably happy to go along with your senseless requests. That is, until you see a crater that you think the Linea can handle because it rides beautifully well otherwise, but you’d be mistaken. The Linea crashes, and crashes hard. I could give it the benefit of the doubt and say that the test car that I’d been driving might have already had some damage, but then it would have made itself apparent at other instances, too. Which it didn’t. Thankfully, it’s quite a bit off the ground (190 mm, to be precise) and that’s the best in its segment, so you’ll probably never have to worry about large speed bumps.

Then there’s the equipment list. New for the 125 S is a touchscreen that’s big enough for an ant and it even has navigation. It even gets auto headlamps, auto AC, rain-sensing wipers and a solid boot to boot (500 litres of storage!). But Fiat deemed it unnecessary to equip it with a reversing camera. And finally, the seats. Just like the Punto, good luck finding the right seating position. The steering wheel is big and you can never seem to find the right position for it, either. Oh, and long distances turn into a back-breaking endurance thanks to the uncomfortable seats. Shame for a car that drives so well, really.

Should you buy one, then? The Fiat Linea isn’t quite the package to beat just yet, as you may have figured. It has its plus points, sure, but it backs that up with an equal amount of flaws. The biggest of which is probably its after-sales service, which is still nothing close to the best. For 10.46 lakh (ex-showroom, Delhi), it’s a fair bit of money for a car that’s not at its best yet. Hopefully Fiat can turn this around and salvage a product that has a fair bit of potential. Or is it too little, too late? I fear it might be.