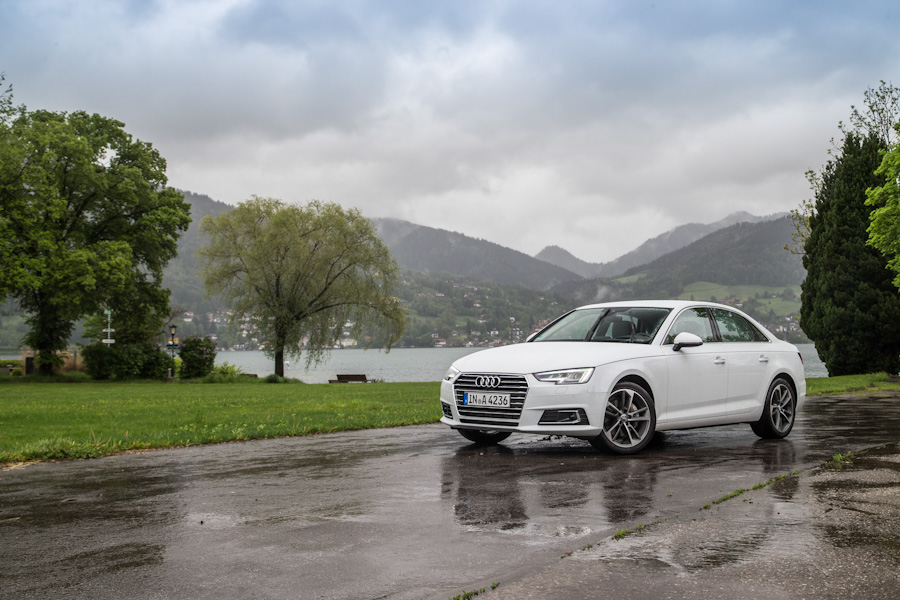 The Internet is awash with opinions about a lot of things. With regard to the topic at hand, you’ll read about a lot of people saying that there’s very little about the new A4 that’s, well, new. Remember, though, that some of these opinionated chaps also denounced the fact that we’re all the product of evolution (‘I didn’t come from no monkey!’). What I’m trying to spell out here is that Audi’s done a lot of good work with the new A4, so allow me to walk you through the changes.

I, for one, am all for an understated look for a sedan like the A4 and here it scores heavily. Those clean lines and cuts accentuate just that and while the revisions to the headlamps, tail-lamps and other defining bits are subtle at best, it’s bloody well done. If what I’ve been hearing is true, Audi should be bringing in the let’s-not-blind-people Matrix LEDs and that’ll just be swell. Sure, this may drive the price up a bit, but it’s a really cool option to have, honestly. What else? Lots. Now that Audi’s given itself some breathing space by getting the A3 in India, I think it’s allowed the A4 the chance to have a firmer personality. I say this because the new A4 is now longer, wider and weighs around about 120 kg less, which crucially makes it lighter than a similarly specced 3 Series, C-Class and even the XE. I won’t go too deep into it, but this is all thanks to Volkswagen’s MLB platform that makes judicious use of aluminium and steel.

Where this really shows is on the inside, because there’s a lot more space compared to the A4 we currently have in India. You can get your fat friends in pretty easily, although you’d best restrict that to two people in the back thanks to the transmission tunnel. Two and a dog should suffice, then. The party trick, of course, has to be Audi’s Virtual Cockpit thingamajig that essentially means you have a giant hi-def screen in place of your instrument cluster.

Here, you can choose to have either a massive rev counter and speedo right up front or you can have the navigation, infotainment and other car information dominate the screen with the rev counter and speedo taking on a side role. Sounds like a big win for the directionally challenged, really. I would know, considering I belong to that enviable group. Anyway, the point is that it all works really well and I seriously think the new A4’s cabin is one of the best to be in currently. There’s so much quality everywhere and the fit and finish is brilliant, to put it simply. It even supports CarPlay and Android Auto – always welcome in cars nowadays.

So far, then, it’s nothing but good news for the new A4 and once you get down to driving it, it’s a happy continuation of that trend. It’s uncertain yet as to what engine and gearbox combinations Audi plans on bringing, so I’ll focus on the 2.0-litre TDI with a 7-speed dual-clutch auto – the one that’s most likely to come to India. It’s a happy little chugger, the A4. Refinement is fantastic and you’d be hard-pressed to catch any noise filtering in, unless you’ve left the door cracked open a smidge like my lovely colleague had. Power kicks in nice and smooth and is linear till the redline, so Audi’s done a good job of utilising the 187 bhp and 40.7 kgm.

In case those figures look a bit familiar then you’re right, because it’s the same engine powering the new Superb. And while even the ride was sublime, Munich’s ridiculously smooth roads admittedly aren’t the best place to judge that aspect. Without a doubt, though, what seriously puzzled me was the way the new A4 handles. From what I’ve noticed, a sort of trend has been emerging, wherein cars in this segment have been gravitating towards a compromise between a comfortable ride and handling good enough to have the more skilled of the lot grunt, ‘This is acceptable, yes.’

I really thought the A4 would be more of the same, but it’s gone completely soft compared to the likes of the 3 and the XE. It’s not rubbish at it, but it’s hardly going to goad you into getting its neat backside out. And it’s all the more puzzling because the engine’s tuned in a way that makes it quite quick, but I’d save the hard-charging around the bendy bits for another car if I were you. So yes, that dual-clutch auto works fast going up and down the gearbox – surprisingly fast, at that – and that (flat-bottomed) steering is a big jump from the current A4, but after a little time with it, you’ll realise you’re fooling no one, really.

All this leads it to a bit of a predicament, if I’m honest. Audi’s made this a lovely car to be driven in and it’ll now hold its own against the 3, the XE and the C. I really wish it involved the driver as well as the others, though, and with more powerful versions (the S4 mainly), I hope Audi plays around with the suspension a bit so that it can be a better host to the extra horses. I’m sure it can, of course, because Audi’s got some lovely handlers in its fleet already. Implement that, definitely bring down the Virtual Cockpit and Matrix LEDs and, finally, price it brilliantly when it launches in India a few months from now, and I’m sure you’ll see a line of converts outside your showrooms, Audi. Oh, and if possible, get cracking on that RS4, too, please?

The other, tinier one

Nope. That’s not where it ends. Y’see, Audi let us journalists have a go in the refreshed A3 as well. It’s always struck a chord with us, the A3, especially when Audi sent over the cabriolet for a while. That car is just such a sweet thing and with the updated one, it’s just gotten that much better.

As far as its aesthetic appeal is concerned, there are a few changes here and there, but nothing alarmingly different. Most notably, you’ll realise that the A3 now looks like a carbon copy of the new A4 from the front, which includes those lovely Matrix LEDs and the changes at the back include slimmer tail-lamps and a chunkier rear diffuser. Oh, and Audi’s also given it those awesome swooping LED (dynamic, some might call it) indicators all around. Other changes include the addition of the Virtual Cockpit – again seen on the A4 – and a slightly revised MMI system. That’s about it, though.

The big change comes by way of the engines on offer. Audi no longer supplies it with the 1.8 TFSI motor. Instead, a new 2.0 TFSI that makes 187 bhp and a plentiful 32.6 kgm does the job. Believe me, having a go in it on speed-derestricted autobahn sections is one of the most fun things you can do. Cat-like reflexes, 0-100 kph in 6.7 seconds, a fast-acting 7-speed auto ‘box and a kerb weight that’s delightfully less make this a very, very interesting car. The other engine option I drove, the 2.0-litre TDI, comes in two tunes: one with 148 bhp and 34.6 kgm (the same 35 TDI we have in India) and the other with 181 bhp and 38.7 kgm. No prizes for guessing which state of tune we’d prefer.

The point is that not much has changed in the way the A3 drives and that’s no bad thing at all. It’s plenty flickable, the steering still isn’t as lively as you’d like it to be (but that’s still forgivable once you factor in the bigger picture), it feels a lot quicker than its numbers suggest, and since the suspension bits and bobs haven’t been altered, I’m fairly certain it should be as comfortable as the current one, which is again a good thing.

I even had a blast driving the S3, but that’s unlikely to make it here so I’ll refrain from droning on about that. For whatever it’s worth, though, Audi’s facelifted A3 does a pretty good job of making an already good car just that bit better. It should be here by the end of the year and you can expect a bump up in prices. It’s fine, though. Just bring us a yellow drop-top S3, and all shall be forgiven, Audi.