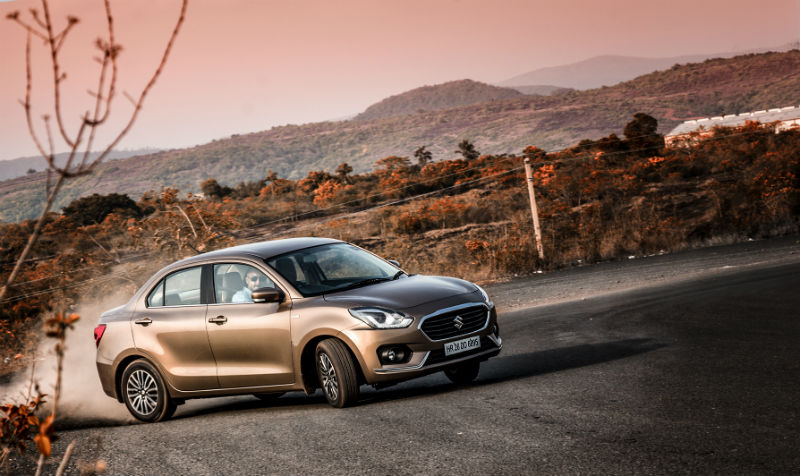 Photographs and Video by Aditya Bengali

Fifty thousand five hundred and ninety five. You’ve got to be doing something right if that’s the amount of cars you’ve sold in the last three months alone. Bear in mind that this isn’t the figure for one company’s entire line-up of cars; it’s the cumulative number for only one of its cars – the Dzire. I’d have fidgety, jelly hands were I assigned to come up with an encore for it. Thankfully, and rather wisely I might add, that’s not the case, obviously. How do you follow that up?

Well, just like this. This is the new Dzire, and before that conjures up images of infuriating taxi drivers manoeuvring it recklessly down our roads, let it be said that the current car will be rebadged as the ‘Swift Dzire Tour S’ and sold to cabbies to help you differentiate between sane drivers and taxi-folk. The ‘Swift’ tag’s been dropped as well for this new one, although I wish Maruti had spelled ‘Dzire’ right, too. Anyway, that niggle aside, there’s much to look forward to. I don’t believe there’s a car around that looks better; not in this area of the playground, at least. The subtleties in its design are as likeable as its more glaring elements, and this amalgamation helps it to be a crowd-puller. That’s not something you’d expect to be saying about a car like the Dzire, so obviously the designers have been justifying their worth. I’ll leave it to your eyes to form an opinion about its look, of course, but we’re sold, that’s for sure. So, apparently, are the people of Goa, who couldn’t help but glare inquisitively every time one of our media cars flashed past.

If we’d have pulled over and given in to their curiosity, I believe they’d be making a beeline shortly thereafter for Maruti showrooms after surveying the interior – it’s that good. The stuff inside feels expensive, and there’s a quality to the fit and finish that’s hard to fault. My lensman, Aditya, owns a five-year old Dzire, and he’s already thinking of ditching it for a new one because of the way it’s seemingly an upgrade in every aspect. This may mean that he’s slightly deranged when it comes to his finances, especially considering he just got done with his loan a few months ago, but it’s more likely that it suggests Maruti’s done a phenomenal job with the cabin, too. It’s gone and put in the same touchscreen that you now get in recent Marutis, which looks and operates just fine. This also means there’s Apple CarPlay and Android Auto support – I hear that’s an important thing to have nowadays, connectivity-wise. There’s also a new flat-bottomed steering wheel, a fresh design for the climate controls and a thoroughly modern instrument cluster. Everything feels like it belongs in a car that’s been built to impress, and I take it that’s a quality that will appeal to a large audience. Considering Maruti’s been averaging 15,000-odd units of the Dzire each month, I think said large audience will be mighty pleased. Elsewhere, the seats are comfortable, there’s more space in the second row, the cabin feels light and airy thanks to the colours used, and there’s even aircon vents for the rear passengers to help them avoid melting into a puddle in Mumbai’s heat. There’s even a useful 378 litres of boot space for your groceries and blow-up dolls. Quite impressive overall, then.

What I was looking forward to the most was the drive, unsurprisingly, and this is despite the fact that Maruti’s carried over the engine options unchanged. The difference with the new Dzire is that it now has a kerb weight that’s considerably lower, and less weight equals a more involving drive and a longer interval between fuel stops. Anyway, as I said, the engine options remain the same, so you get a 1197cc four-pot petrol and a 1248cc diesel. Both get two transmission options: a 5-speed manual and a 5-speed Automatic Gear Shift (or AGS, Maruti’s take on the automated manual transmission) tranny. Time constraints and insensitive journalists meant, however, that we were only able to drive the petrol manual and diesel manual variants, but that’s fine by us for now considering a significant portion will be picking up these variants anyway.

For what it’s worth, the diesel feels average, at best. The apparent weight loss isn’t really, well, apparent on the move. The 74 bhp and 19.3 kgm do little to mask the bulk. Perhaps that’s a stronger word than the experience merits, but it’s definitely not a sprinter. The lag is apparent at lower revs, but the midrange sees a strong spike, so that’s good considering most of the driving will be done in that band. I wasn’t expecting it to be a rocket, but I hardly figured I’d walk away wanting more, especially keeping the weight loss in mind. The steering, thankfully, isn’t numb, and the clutch is light enough to brave incessant traffic. The 5-speed manual, though, that’s where things take a sharp nosedive. It’s clumsy, notchy and it just doesn’t feel natural to use at all. I remember the old Swift having one of the nicest gearboxes around. What went wrong along the way?

Comparatively, the petrol is a delight. I’m sure it would have been equally appealing in isolation, but the contrast made the switch a lot more fun than it should have been. The peppy 1.2 engine  puts out 82 bhp at a peaky 6000 revs and 11.5 kgm, but that’s more than enough to bring it alive. It weighs in at 860-895 kg (depending on the trim you choose), so it’s obvious that it’ll be light on its feet. It’s a happier experience cornering the Dzire. The steering is lighter and more fluid, the gearbox surprisingly, is a lot more responsive, the clutch and brake pedals feel extremely responsive, and there can be no questioning its ride thanks to the 15-inchers it runs on. And while it may trick you into thinking it could handle a lot more speed around the bendy bits, it’s best to tread a bit cautiously beyond a certain point because the 185 section tyres can only handle so much. Fit aftermarket 205s if you’re feeling adventurous.

The AGS transmissions that come with both engines are a bit of an unknown quantity for us at the moment. Maruti’s stated that the latest generation of the AGS is a far cry from the one it replaces and that refinement levels have gone up considerably. Judging by how good the Dzire is otherwise, I’m inclined to believe it about that. No doubt, we’ll get the pair later to give you an insight, but for now things are looking really good for the new Dzire.

If you think about it, there’s hardly much else that you could ask of it. Maruti’s hit the sweet spot with a car that not only looks great, but is also very well equipped, has a lovely cabin, has enough space in the boot despite being less than four metres in length, and can be thoroughly engaging to drive (in the petrol’s case, that is). Cough up anywhere between Rs 5.45 lakh and Rs 9.41 lakh (ex-showroom, Delhi) for one of these. If you think that’s a wide gulf, then you should know that that’s spread out over no fewer than 14 trims. Chances are that there is a Dzire for every kind of customer. The only downside of a car this good that’s priced as well is that Maruti looks set to continue to sell as many, if not more Dzires every month. This is good news for Maruti, but think of the addition to the traffic. It’s going to be chaos.