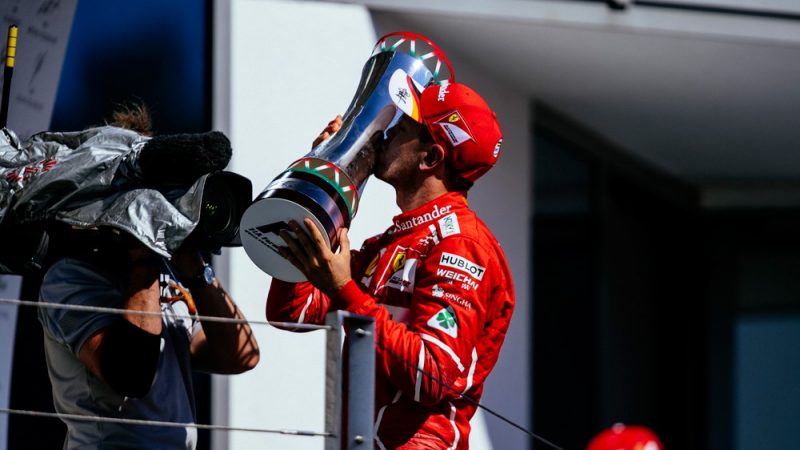 When the red lights went off,  Hungaroring witnessed a lightning start by the prancing horses, but sadly, it was game over for the Aussie Daniel Ricciardo, who was hit hard by his fellow teammate Max Verstappen. Just a couple of corners from the start line, Max over shot into the inside of the corner eventually locking up his tires and hitting Ricciardo. The Aussie had no other option than running wide and eventually ending with a puncture.

While his car stalled in the middle of the racing line, drivers tried to avoid him, but it was a close call for Palmer who missed the Red-Bull by a whisker. With yellow flags coming out it, was safety car time; this scene lasted from lap two till lap five until all the debris and liquid spill on the track was cleared. Post investigation the Race Stewarts imposed a ten second pit-penalty on Max. With Daniel pulling out of the race the battle for first place got reduced from from six drivers to five. But with the track supporting a single pit stop strategy, Vettel started to build the gap ahead of Kimi Raikkonen, but it was only for a while as he started facing a steering problem. Things started to get worse as he was advised by his race engineers to avoid going over the kerbs, hence from avoiding more damage to the car. That meant slower lap times as the German could not use the complete track. This paved way for Kimi, who started to close the door on his teammate but as usual he had to follow team orders and stick behind the four time world champion.

While Vettel was nursing his car with a steering issue, the Mercedes started to built pressure on the Ferraris. In the mean time post lap 30, the top four stated to pit-in lap by lap, but Max opted to stay out until lap 43, which gave him an added advantage to override his 10 second pit penalty. While Hamilton swapped positions with Bottas as he claimed to be faster than the Finn, the Brit promised his teammate that he will give back his position if he cant take down the Ferraris. Meantime, Mercedes were facing communication problems as the radios connecting the pit wall and the cars went flat for a while. Despite efforts from Hamilton, Vettel lead the race and won ahead of the Finn, who had no other option than  sticking to second place despite having a better pace than his teammate and really ended as the peoples driver of the day.

But Hamilton displayed true sportsmanship as he gave back Bottas position in the last corner, while Max finished a close fifth place ahead of Fernando Alonso who drove his Honda to the finish line in sixth place. Notably, Alonso posted the fastest lap of the race with a one minute 20.1 second really a reason to rejoice for the Japanese manufacturer. Hungaroring being a less DRS zone and the earlier 1-2 finish for Ferrari also came in a similar circuit(Monaco GP).

Off to the next one…