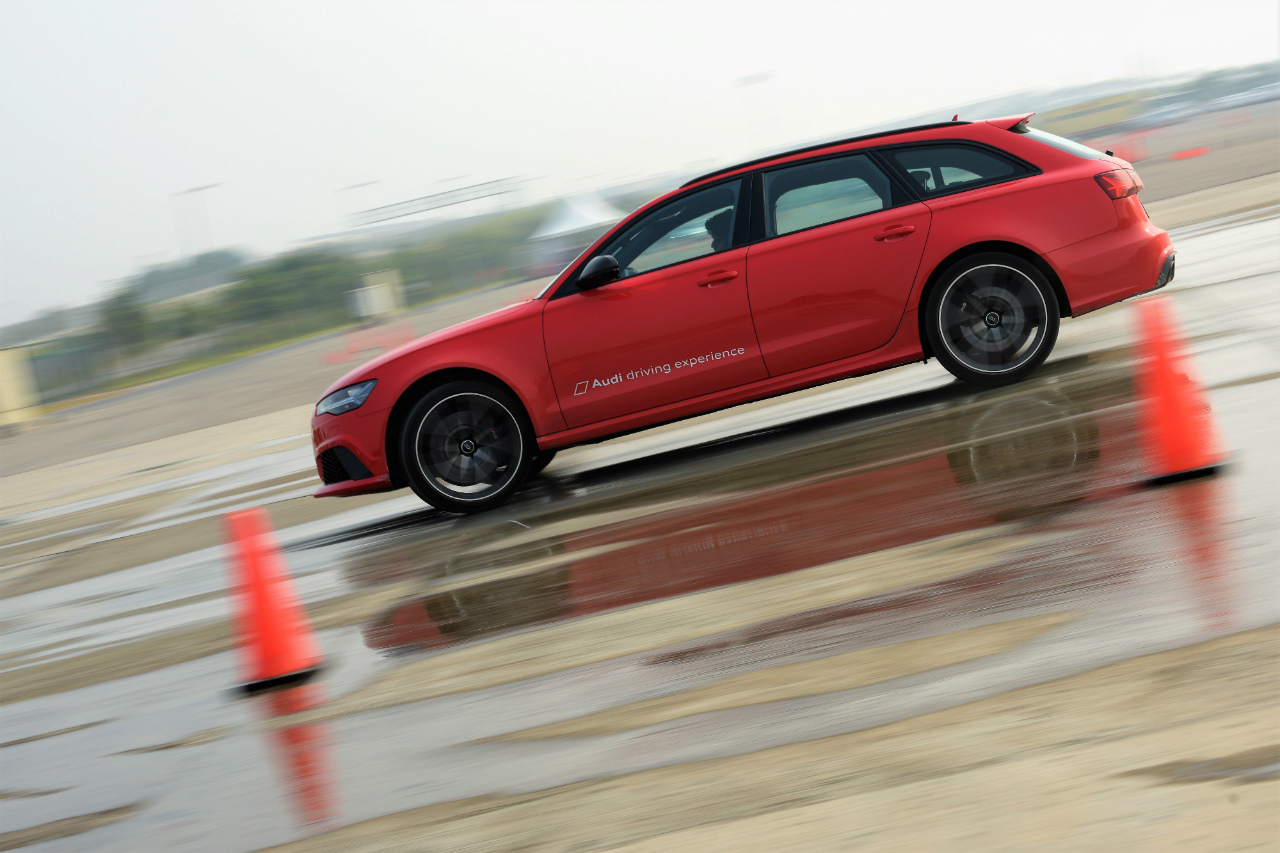 What a clichéd headline, you must think. Well, as a reader with a quarter of a scroll down a webpage, my brain would have made me believe the same. But what we’re about to discuss here isn’t clichéd; it’s far from that. When Audi called us to drive the new R8 V10 Plus on a Formula 1 racetrack, we knew there was fun to be had. What we didn’t know was that an event off the track would be as much fun. Or maybe more.

Avishar, our web writer – who might have the ability to foretell – very casually asked if said event was to be confined to the track or the nearby parking lot. I, like most of us, passed on obligatory smirk, suggesting that we knew more about track events. As it turns out, I did not.

Right beside the track – within the premises, though – Audi had arranged a number of cones to set a slalom course for its customers. As I lined up in my pick from the press fleet, a red RS6 Avant, ready to point and shoot – Audis are brilliant at that – through the slalom, someone decided to offload a tanker full of water. The skid pan was ready, instructor Rayomand Banajee more so, and it was clear that there would be some sort of wheel slippage.

As we were asked to turn in hard, followed by ‘floor it’, the RS6 gracefully stepped its tail out. Instinctively I wanted to not make a fool of myself by spinning, a‘dab of oppo’ was very desperately appointed with feathering of the throttle. Not only did it bash the common notion (among the new bunch of enthusiasts, at least) that Audis can’t go sideways, it also helped me achieve the balance between momentarily keeping it lit without doing a pirouette or ending with the car’s arse swing the other way –tank-slapper in fancy-speak.

That’s a dream come true, right there. Not the first time it has happened, nor would it have pleased either Keiichi Tsuchiya or Tiff Needell, but there was something so unique about it. What could have been more pleasing than the sight of an Audi estate going sideways.

When the quattro AWD system senses wheels spinning unnecessarily it sends power to another to ensure that the vehicle grips. Here when it learnt the front-end was about to wash out (sudden steering input and full throttle to blame for that), it started sending power to the rear wheels, hence ensuring the car stayed glued to the tarmac. With the ESP off, the 4-litre twin turbocharged V8 overpowered the rear wheels, and the RS6’s dramatic antics followed. On the road, with intelligent systems like quattro and electronic nannies (as long as they’re switched on), the RS6 Avant would have continued its relentless pace without having to worry about stepping its tail out, like there’s no tomorrow.

Talking of tomorrow, the following day was spent driving the R8 early in the morning, following a short exploit on the BIC. Off the racetrack, it surprised by being equally sublime, docile, and characterful. Of course they aren’t the best set of adjectives used to describe the car; you’ll need to click this link for a detailed report on the R8 and possibly a better variety of adjectives.