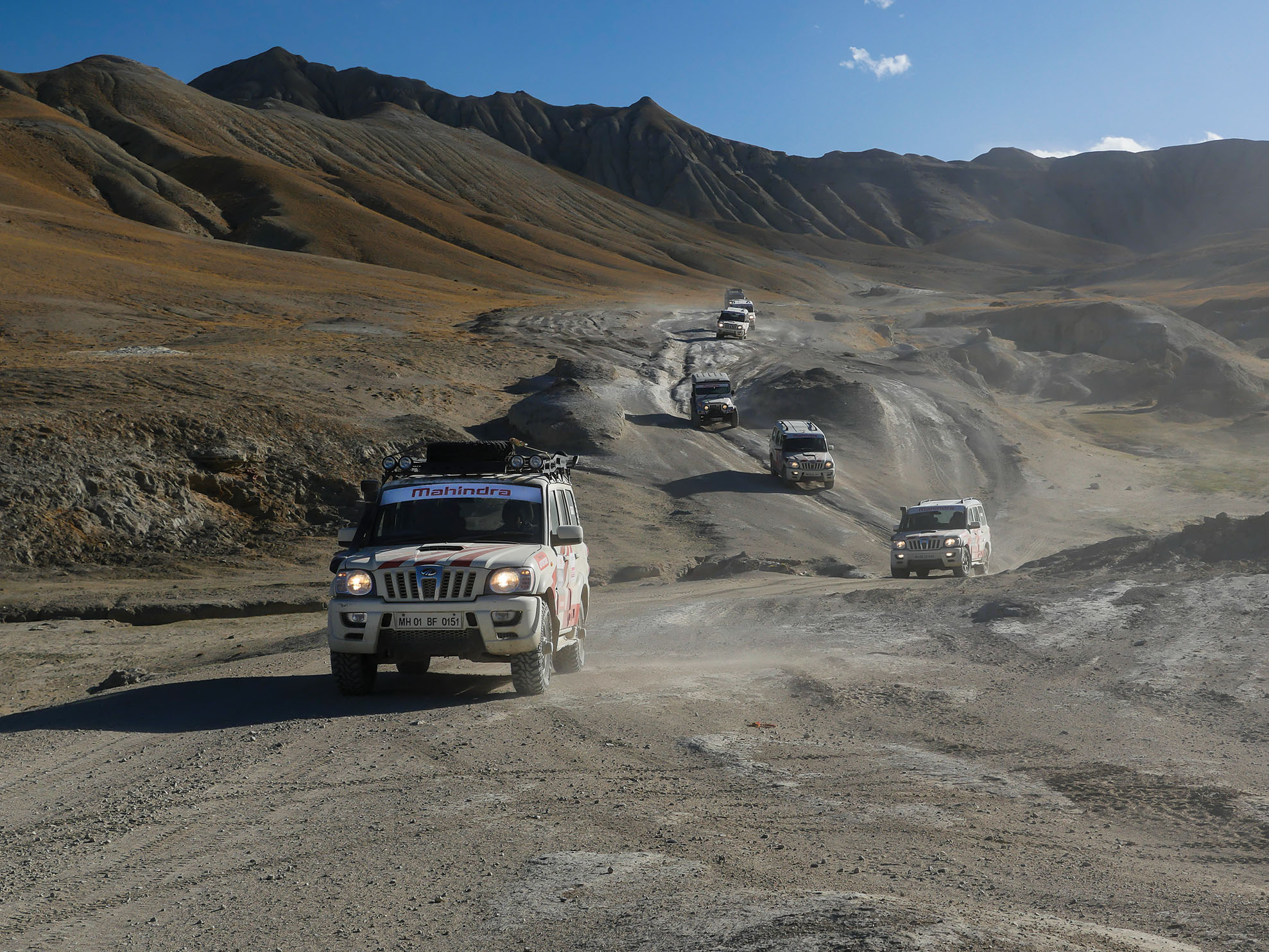 When you think of Nepal, the first thing that comes to mind is Mount Everest, as that’s all everyone knows about the country. But it does have another hidden gem. One that arguably has a stronger allure than the world’s tallest mountain. Think of Mustang like what Pagani is to the supercar fraternity. Not many people know of it, but the ones that do would gladly sell their own brother for one without blinking an eye. And a journey through Mustang is pretty high on every adventurer’s list, which is exactly what the motley crew you see here did. 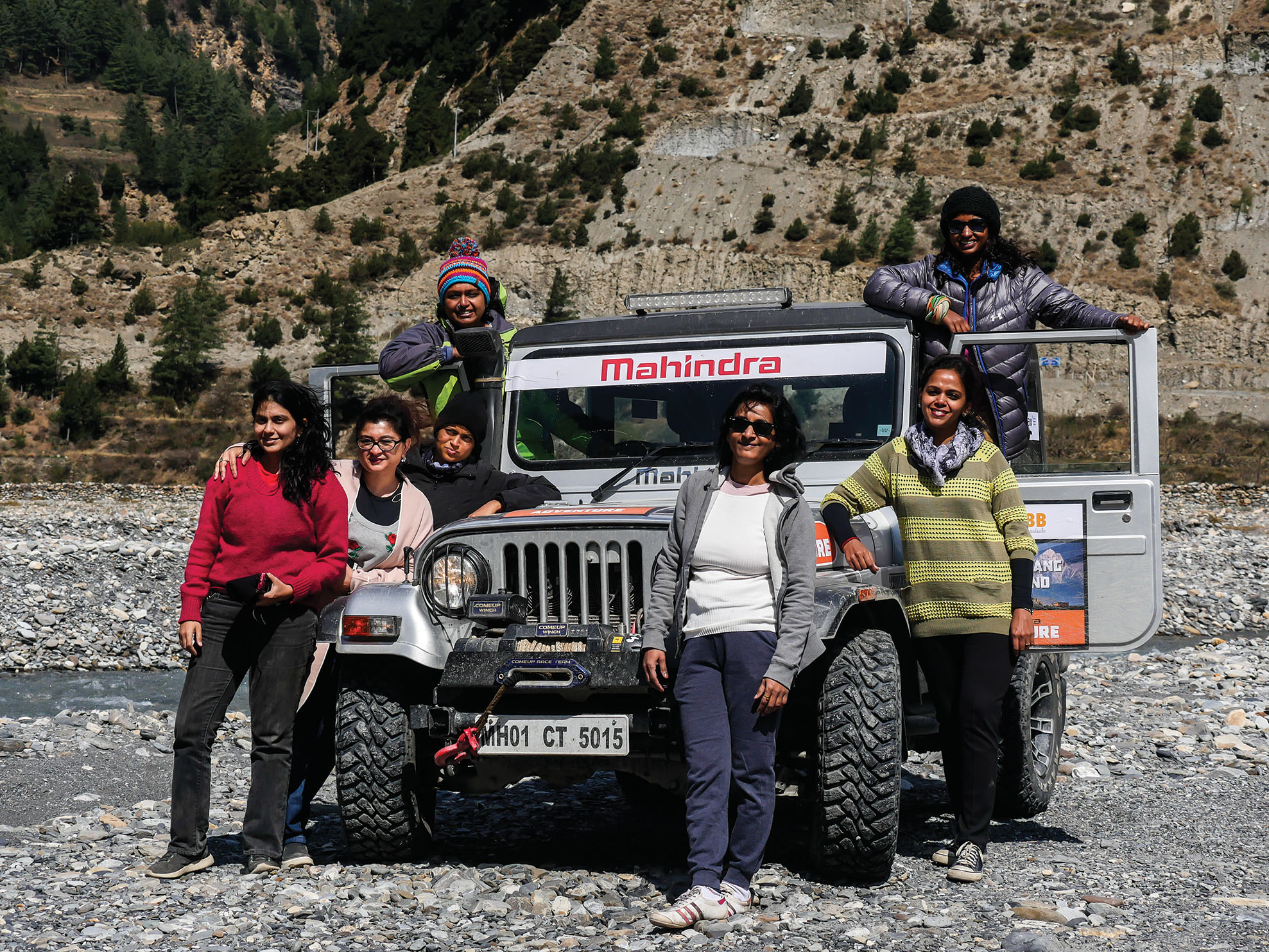 Yes, the cars are Mahindra Adventure vehicles (wow, good eyesight), but the trip was organised and managed by Wander Beyond Boundaries (WBB). Yes, led by a woman, with a majority of the participants and drivers being female. So being one of the sexist males that most of us are, I went in with eyebrows raised so high they disappeared under my hair. Until I read up on Nidhi Tiwari, the lady in charge. And that is where this story really starts. For those who aren’t aware, Nidhi has been driving off-road vehicles for longer than I’ve been alive. Besides doing every adventure route in India, her international resume includes a Delhi-to-London drive and a solo drive through a Siberian winter to the world’s coldest inhabited village. So yeah, if you thought she struggles with parking like your mother does, you couldn’t be more wrong. 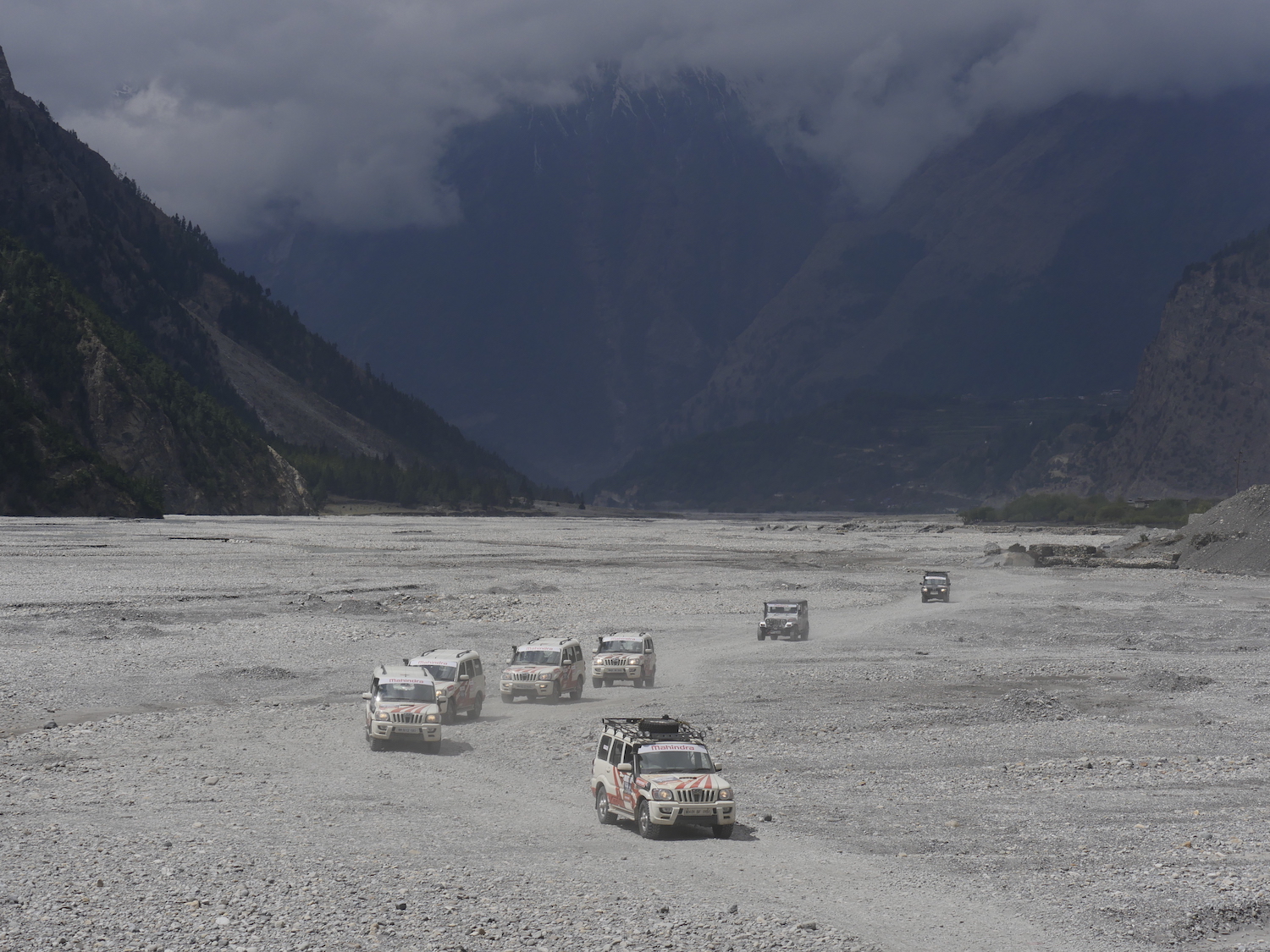 You see, Nidhi had this dream of driving all the way into the Upper Mustang region. Why? Because it is stunningly beautiful and incredibly treacherous. And because they said she couldn’t do it. A lot of planning later, an expedition formulated along with Mahindra Adventure, and she managed to convince a bunch of like-minded (but not as experienced) women and men to come along. And thus, we were headed from Delhi for the Nepal border. 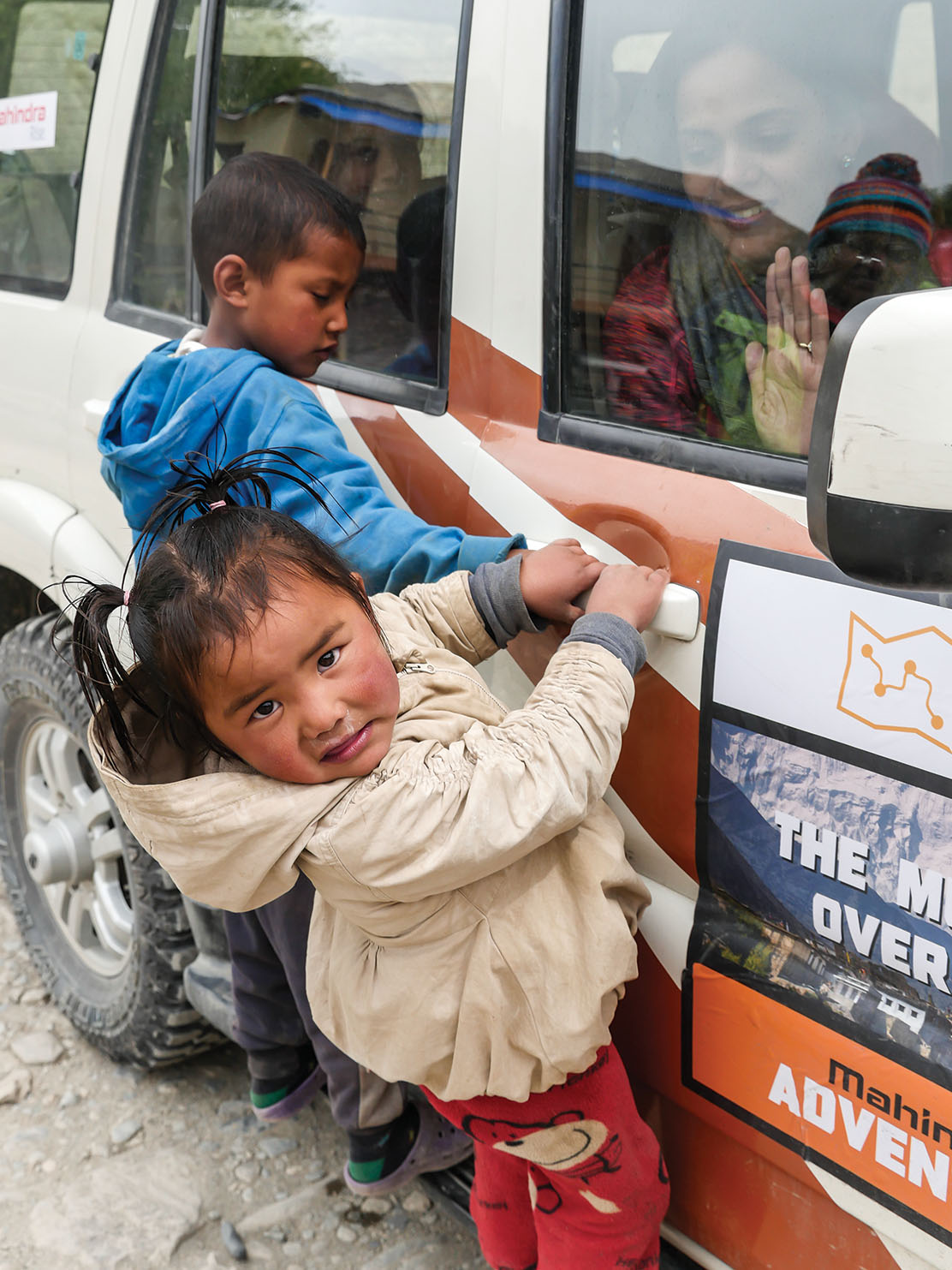 The journey into Nepal feels strangely normal. Of all our neighbours, I feel they are culturally the most similar. They look the same, most of them understand Hindi, and a majority of them share our pathetic road manners. Road conditions aren’t the greatest (though Mumbai is still worse), so at our first night halt in Pokhra, it just felt like another Indian hill station with cleaner air and less people. It was the next day, when we headed out on our real journey toward the Mustang area that things started to change. Within the first 10 km, snow-capped mountains appeared in the distance. By 70 km, roads started disappearing. And then suddenly we were in the mountains. Progress was arduous and slow, and a 125-km journey to Kalopani took us well over 10 hours. We reached exhausted, but this was merely a taste of what was to come. 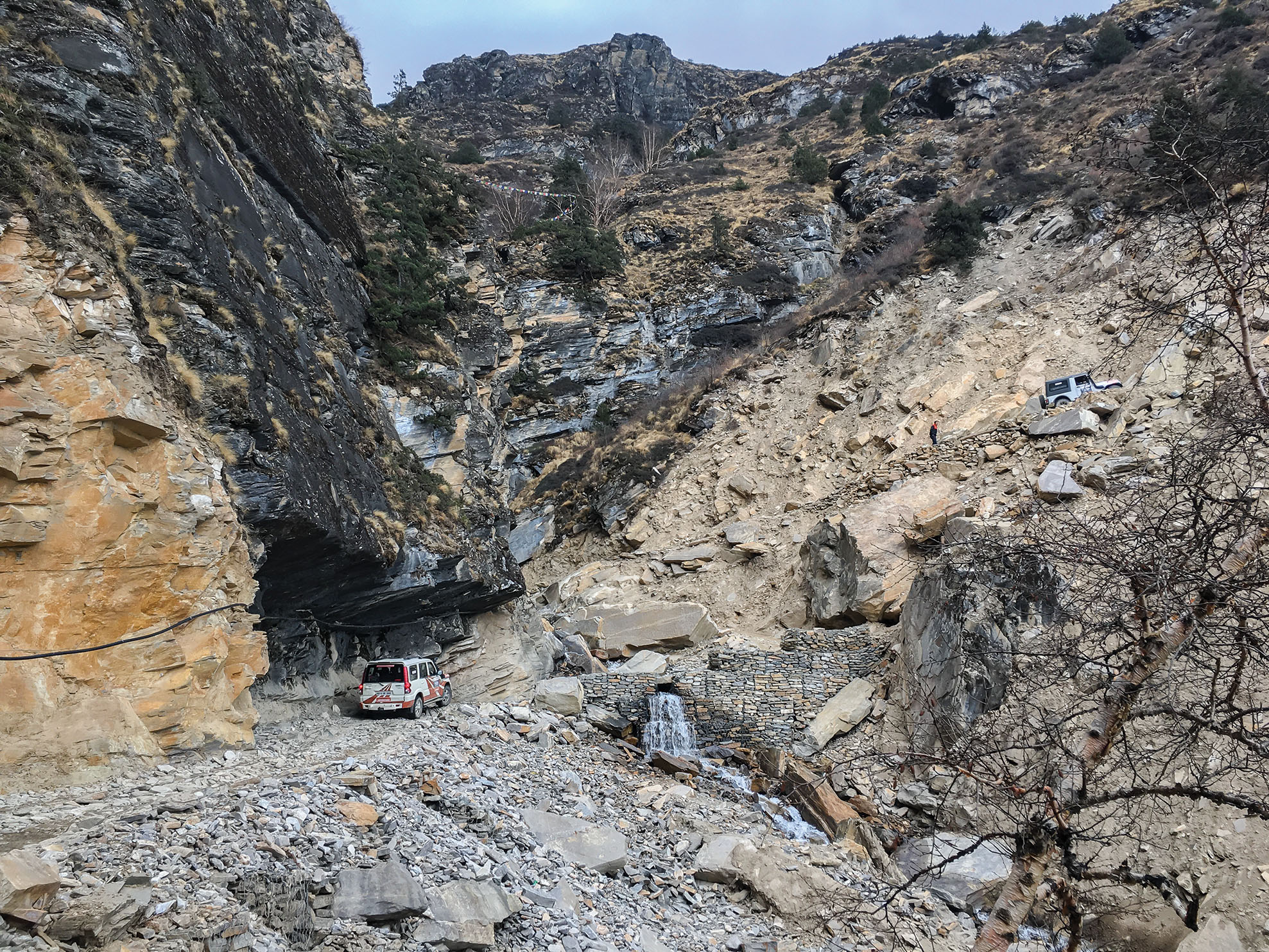 The views started getting more stunning, and while I’ve been through tonnes of mountain ranges before, this was the first time I always had a huge valley on one side. Always. This tends to put size into perspective. The mountains felt bigger, the cars smaller, and the wind channel it created was monstrous. There was greenery all around, but that slowly started reducing as we climbed higher. By the time we hit Muktinath at 3800 metres, the landscape had turned arid and cold. Something like what you see in Ladakh. And as oxygen levels dropped, breathing felt more strained. That night, temperature dropped to 2 degrees and we got up every three hours to turn on our cars to prevent the fluids from freezing. 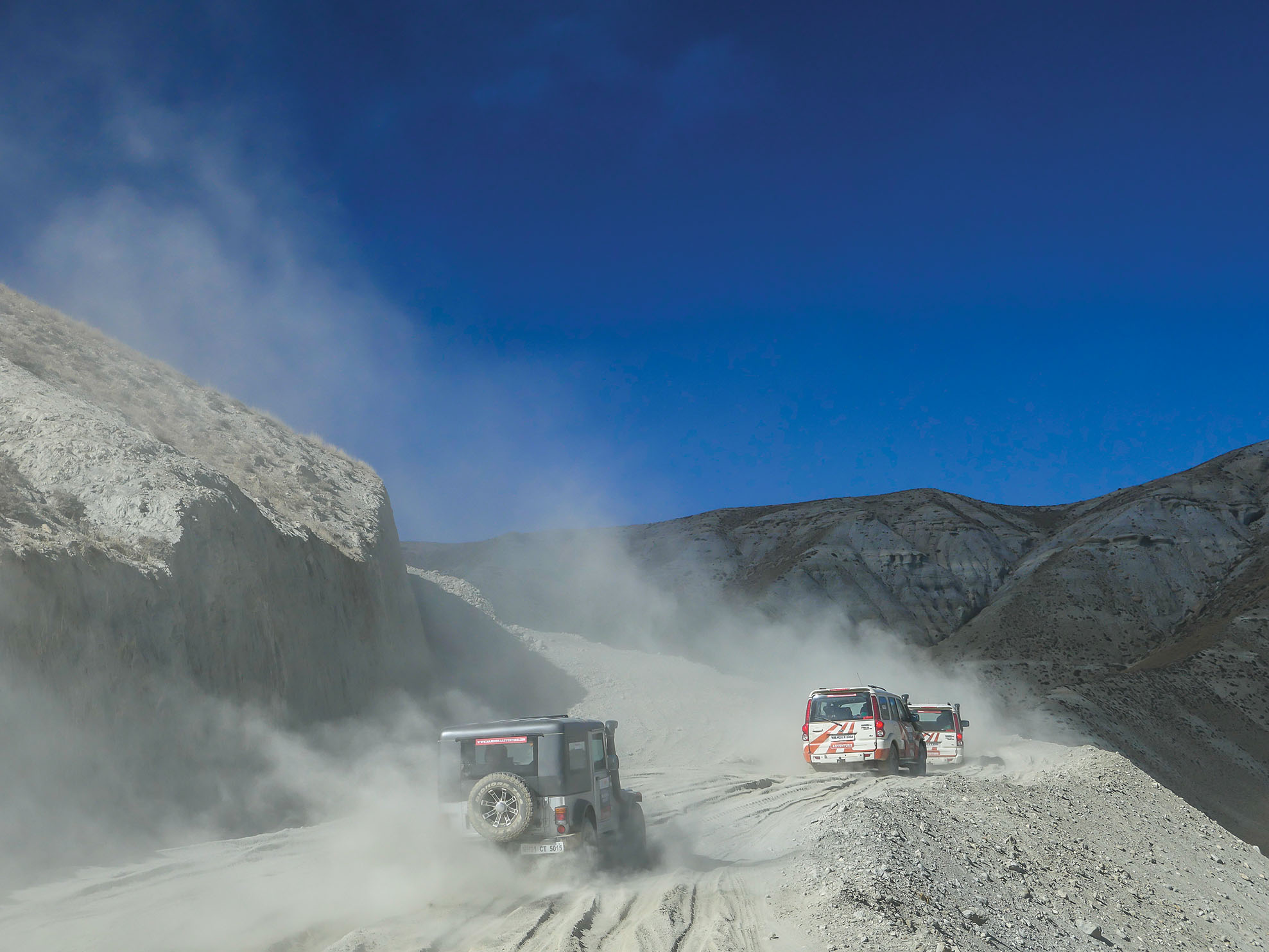 By now we were halfway through our journey, and everyone thought they had faced the worst. Except we hadn’t. The next morning, we headed into the Upper Mustang region, an area that seldom sees cars, partly because it needs a $600 permit, but majorly because the roads are even worse. To give you an idea, we drove in the four-wheel-low ratio for the next four days! Permanently! We faced every kind of road surface imaginable. Loose gravel? Check. Stony roads? Check. Boulders? Check. Deep Sand? Check. Rivers? Double check. Steep inclines? Of course. And to imagine everyone pulled through without incident is a miracle! And I think this was down to the attitude of the drivers. 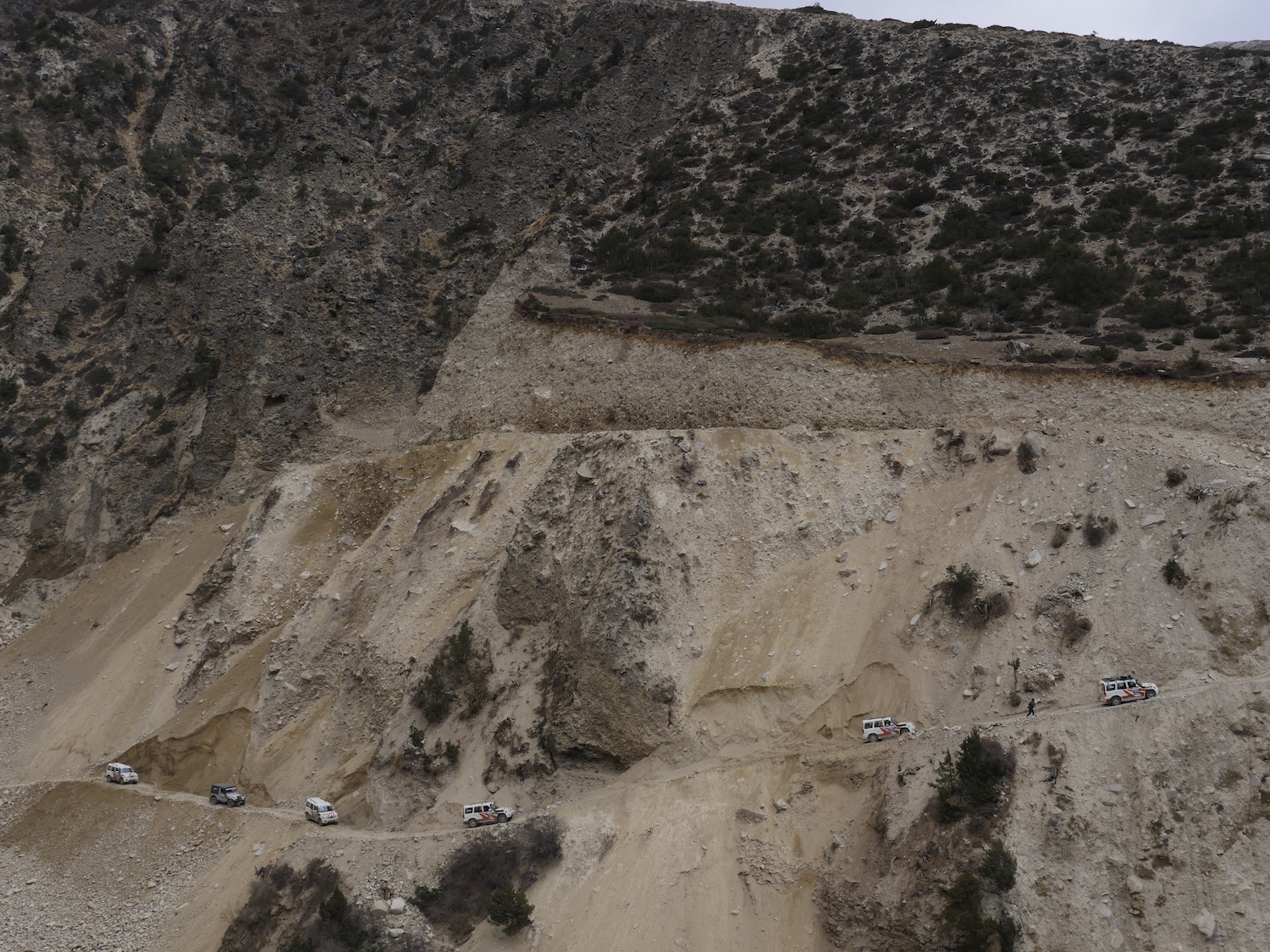 While you may scoff at women driving, these women will change how you imagine them. You see, none of them had the off-road prowess that Nidhi has, and none of them were too proud to say otherwise. But every morning, they would get up with queries and curiosities. They wouldn’t shy away from asking questions most would deem stupidly simple, but their dedication to learning was unlike anything I have ever seen. And when the going got tough, they asked for guidance, rather than giving up and letting someone else cross the obstacle. It redefined the stereotypes of how women aren’t mechanically inclined or interested, and when one of them asked me how an engine works and what do cylinders mean, I was quite pleasantly surprised. Oh, and in case you thought these were a bunch of ‘tomboys’, they weren’t. They were women we meet everyday, everywhere. They were women of our homes, localities, cities and countries, women of the world. 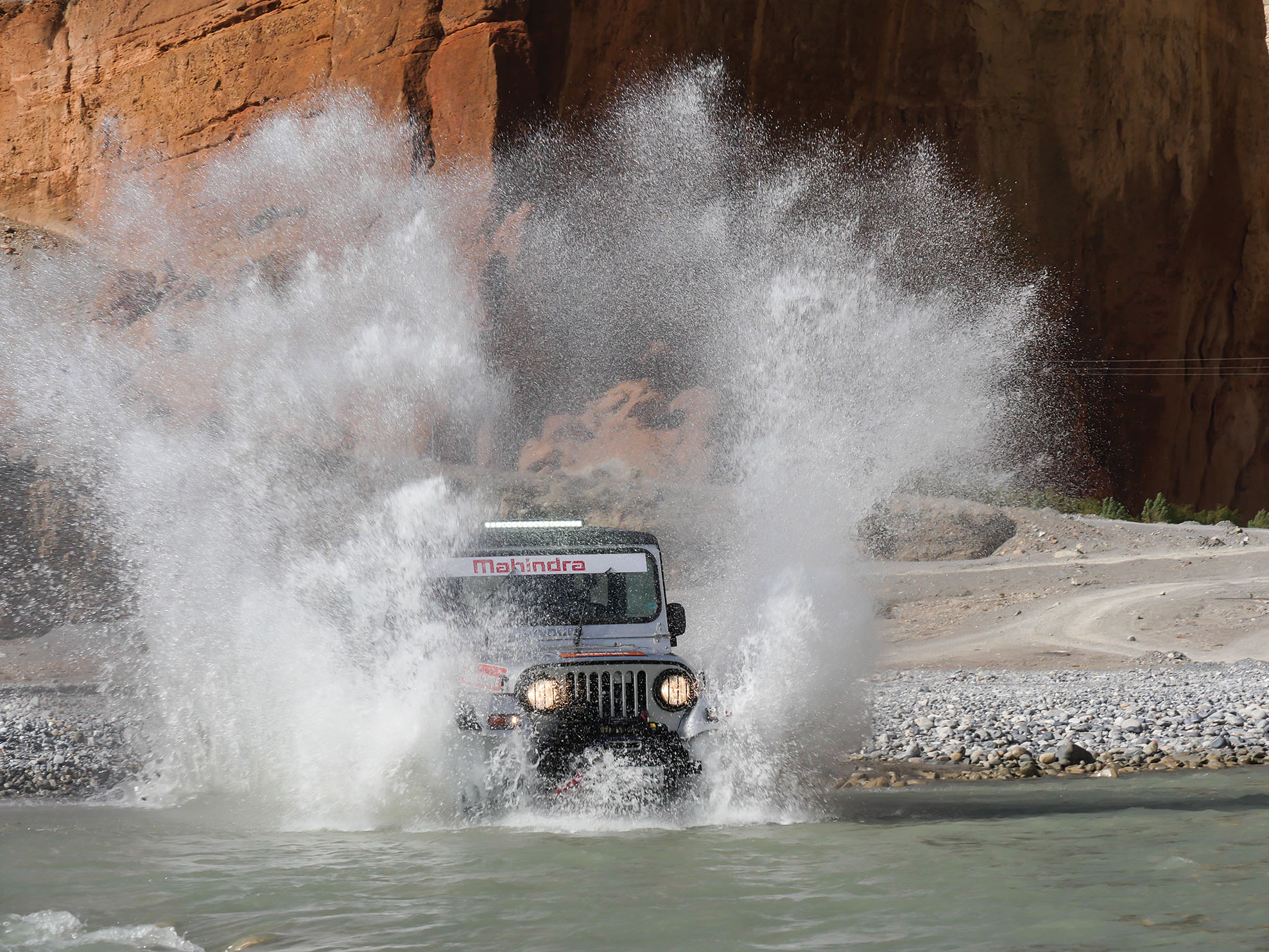 But it was this tenacity and passion to learn and improve that ensured they made it to the final destination of Lo Manthang. I could wax eloquent about how treacherous the road was, and how we drove on roads with only inches preventing us from falling to certain death. I can also go on about how every single mountain we crossed turned up a different landscape. Some were smooth, others jagged and rocky, and then some with sparse vegetation and rocks. I can go on about how all of this used to be underwater millions of years ago before tectonic plates clashed and formed this range, and I could go on and on about how I honestly feel this is more impressive than Ladakh. But I can’t hope to do justice with words, so I implore you to use the internet to the fullest. What I can say instead is that this makes us only the second group of Indians to drive to the historic walled city of Lo Manthang, and the very first crew of women in the world to do it. Now if that isn’t a victory in itself, I don’t know what is. 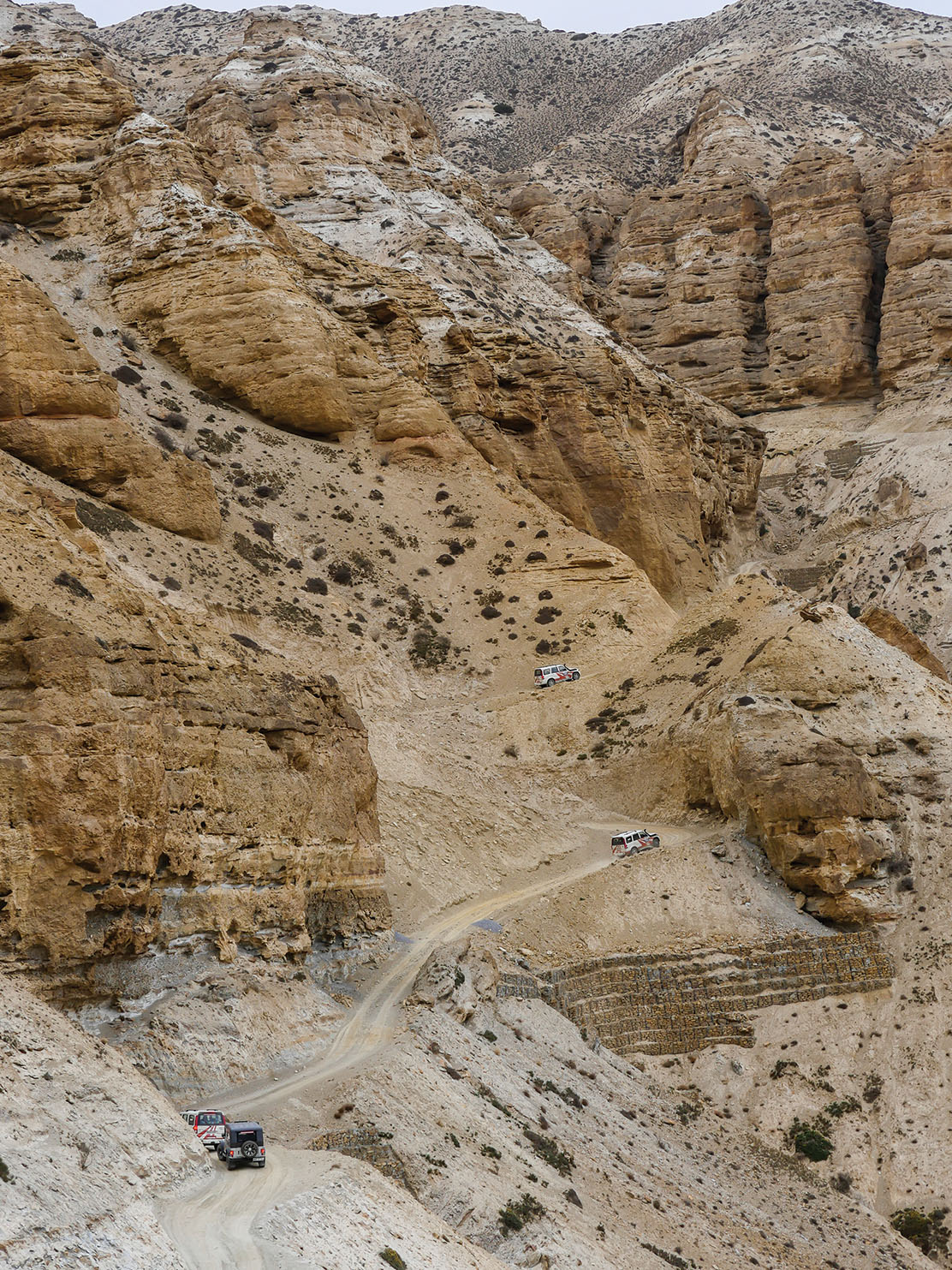 The second victory is the growth of everyone’s driving skill. On our way back, the increased confidence was palpable. There was an overall vastly better control on the throttle and drastic reduction in brake usage. The lines participants took were perfect, and by the time we got to the river crossings, people were really just playing around with all the photogenic splashes. That vast an improvement is something I’m not accustomed to seeing, but I’m not complaining. And that is why this expedition goes down as not just the most visually stunning I have been on, but the one I have learned the most from on a personal and ideological level. 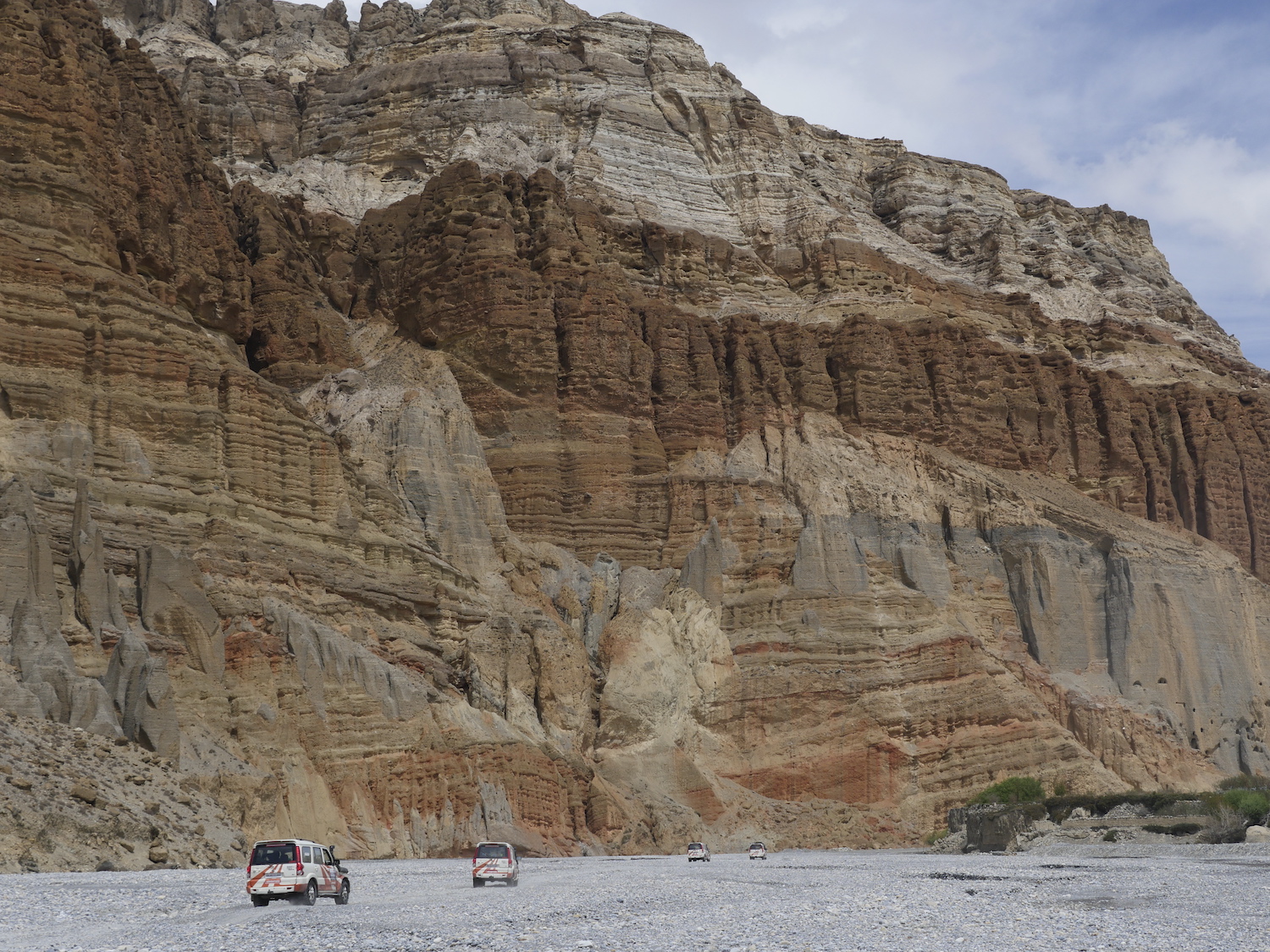 It heralds not just a huge triumph for the participants, but the societal implications it reflects for the rest of us. For adventurers, it redefines what it means to dream, and is a lesson in determination and self-belief. But the deeper implications are what it means for women. Somewhere a little girl will read about this trip and realise that she has been lied to all along when society told her this wasn’t a woman’s genre of fun. Somewhere else a wife or girlfriend will have the epiphany that becoming a mechanic is a perfectly cool thing to be. And then a father or husband or boyfriend will actually encourage the women in his life to follow their ‘manly’ dreams, because trips like these enunciate the truth we all knew deep inside all along — that this isn’t only a man’s world. It never was.