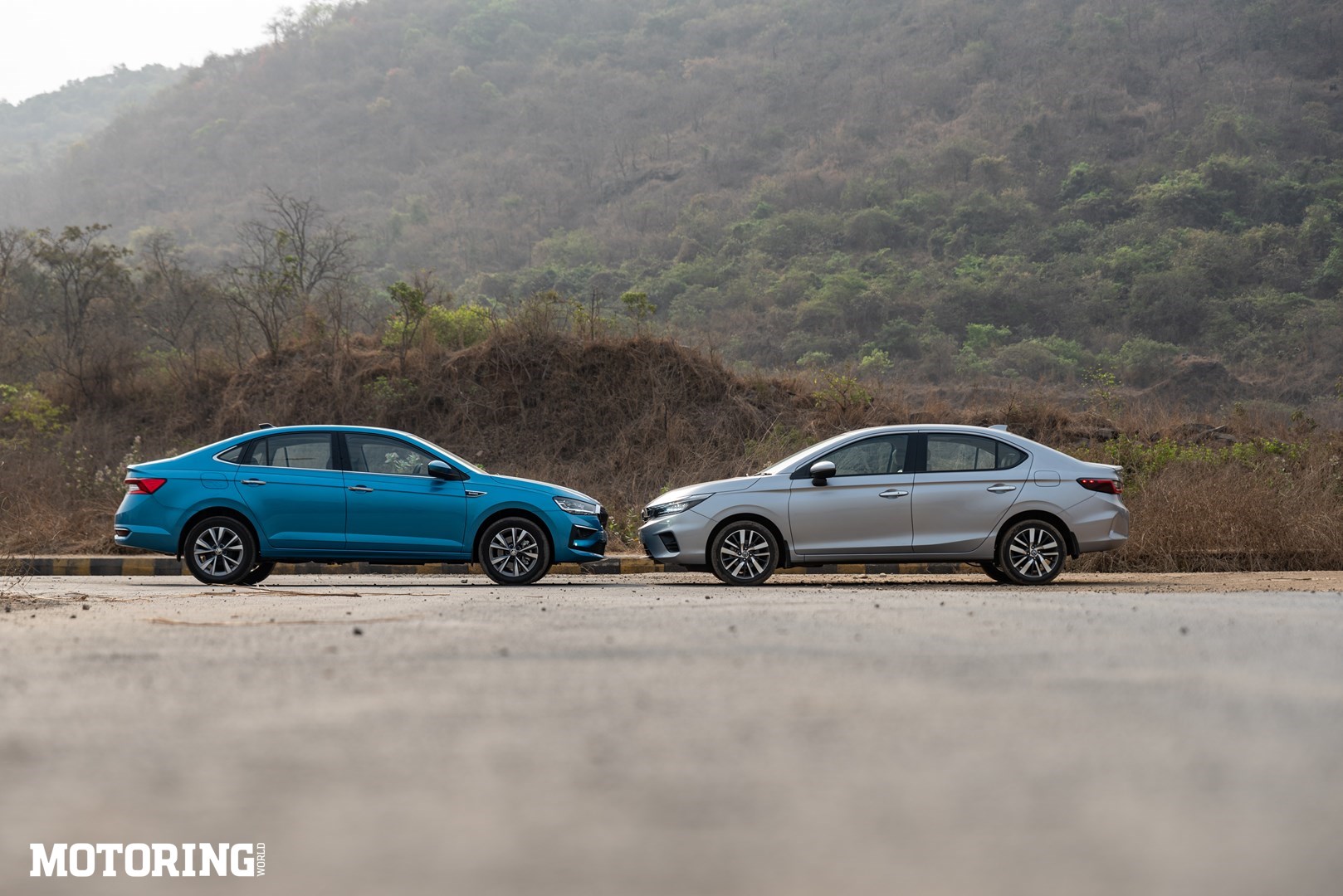 It’s been a while since we had something to celebrate in the midsize-sedan segment, what with similarly sized, and priced, SUVs being the current trend. Which is why the introduction of the Skoda Slavia is one of the highlight car launches of the year. The fifth-gen Honda City was the last major entrant into this segment and that was over two years ago. It only makes sense to see which of the two would woo buyers to a greater degree, which is what you see on these pages. At the outset, let me say that this isn’t a direct rivalry, despite the midsize nature of these sedans. 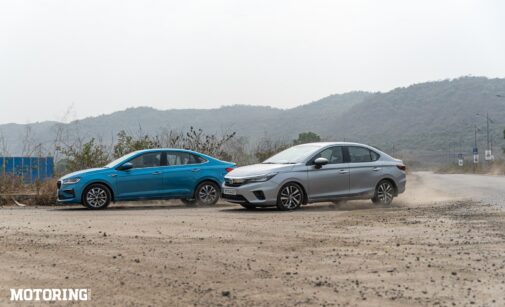 Honda is set to launch its hybridised City in the next couple of months, which should give this 1.5-litre version of the Slavia we have here a better run for its money. Other than the hybrid powertrain, the City will also get a number of feature updates that will ensure it feels more up-to-date. In today’s context, it is actually the Slavia with the 1.0-litre engine that is a better match for the Honda on power and price. What I am endeavouring to find out is which of the sportiest versions of each midsize-sedan will be more fun.

The two-year gap between the Honda and the Skoda is telling. First and foremost is that the Slavia seems like a more modern car in nearly every aspect, from its design and technology to its powertrain and feel. The City’s design has aged well though, and it still looks quite striking. Elements such as the narrow all-LED headlights, the BMW 3 Series-like LED tail lights, the slim grille, and the overall stance still exude a degree of sportiness, and are eye-catching besides. Still, in context of the Slavia’s swoopy look — it’s not exactly a notchback like the Octavia or the Superb, but it does have a bit of the raked rearend — the City does seem to have got a little long in the tooth.

While the Honda gives the impression of being a sleek machine, the Skoda looks, well, typical — stolid and muscular. The 20-mm thicker rubber the Slavia’s attractive 16-inch alloys are shod with make the City looks especially under-tyred, which is a shame as chuckier tyres would have helped the Honda’s stance considerably. So, design-wise, I’d say the Czech sedan noses ahead, but not by all that much. The Honda’s streamlined look will still find adherents, though there’s no getting away from the fact that the Slavia looks decidedly fresher. 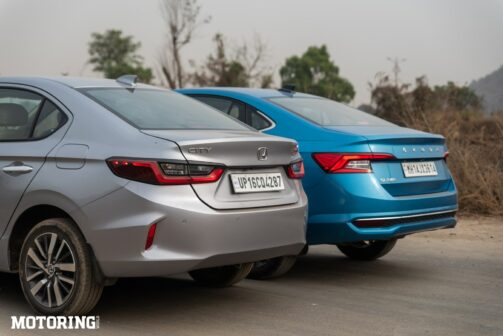 On the inside, the story is similar, yet divergent. The Japanese sedan’s interior is well-crafted, and spacious, but doesn’t feel as special as the Slavia’s. However, the faux-wood finish on the dash does look better finished than what Skoda has done with the slatted orange plastic on its sedan. Both sedans will seat five in relative comfort, though the Skoda does have the minor advantage of greater headroom and shoulder room due to its larger size. Nonetheless, the space that Honda has managed to provide despite the smaller frame is quite commendable.

On the other hand, the City’s front seats don’t offer as much thigh support for the larger among us, though the rear is quite comfortable, if set a little low. In contrast, the Slavia’s front seats are excellently bolstered — from the thighs to the sides — while the recline of the rear bench may be a bit too much for the shorter of stature. This disparity in the seats clearly indicates the City is more focussed on accommodating rear passengers, while the Slavia is meant for those in the front.

In the features department, the two-year gap between the sedans is, again, rather telling. The City does nose ahead on one aspect, and that is the inclusion of a blind-spot monitor. My only issue with this system is that it uses the aged 8-inch infotainment touchscreen to display what’s going on on the left side, which means that if you’re using maps, you’ll have to take left hand corners blind, or look up some parts of the route in advance, requiring you to take your eyes off the road. From ventilated front seats and split-folding rear seats, to a wireless charger and automatic wipers, the Slavia is far better equipped overall.

As I said at the start, I’ve picked the sportiest versions of the sedans, which, for the Skoda means, the top-spec 1.5-litre turbo-petrol engine and the dual-clutch automatic. For the Honda, it’s the 1.5-lite naturally aspirated petrol engine with the manual gearbox; the CVT automatic that the City comes with doesn’t have the same verve as the manual, hence the pick. The joys of a superb normally aspirated engine notwithstanding, the Slavia’s turbocharged motor is far superior in every aspect, from output figures to claimed fuel-efficiency.

There’s no comparing the sheer grunt the Slavia provides, though until about 50 kph, the City does manage to keep up. It’s a genuine pleasure to row through the City’s slick gear shifter and extract the most out of its high-revving engine, but it almost pales in comparison to the Slavia’s lightning quick dual-clutch, especially when the paddle shutters are used, and the slug of torque from the four-cylinder unit. There is one aspect that the City outdoes the Slavia, and that’s the engine note at their respective redlines — the i-VTEC engine’s joyful scream is more enjoyable than the relatively muted sound from the TSI motor. 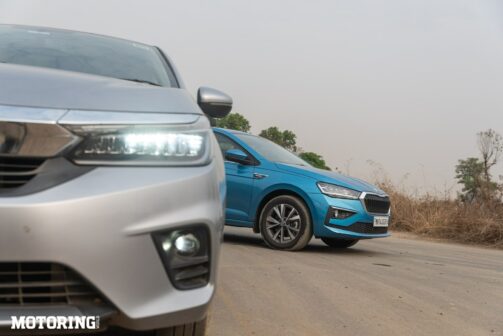 Unlike the Honda, which is set up with a greater concentration on comfort, the Skoda is much more balanced. Some sharp ruts do filter into the Slavia’s cabin, but there won’t be a cause for complaint at any speed. Sound insulation is more than decent on both cars, with road and tyre noise barely filtering through. However, drive both in an exuberant manner, and the Skoda’s hardier build does shine through. Still, the City does offer better ride quality overall, especially for those sitting in the rear seats. 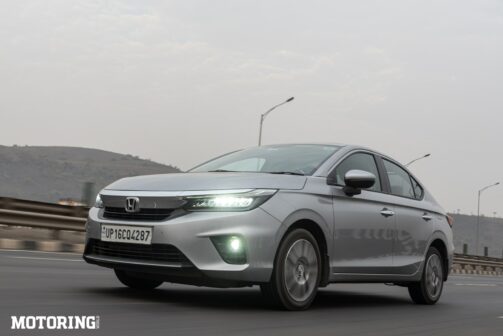 On the flip side, the way the Slavia hustles around a corner is truly engaging, and something I had predicted when I drove the similarly underpinned Kushaq. Keep the engine on the boil and the superb suspension, taut body shell, and sticky 205/55 tyres urge you to push it harder. Body roll is well-contained and the steering is sharp and direct, if lacking some feel. Meanwhile, the City comes across as decidedly less dynamic. The thinner 185/55 tyres squeal when pushed, the soft suspension causes lean angles that bikers might be impressed by, and the steering is even number than the Slavia’s. 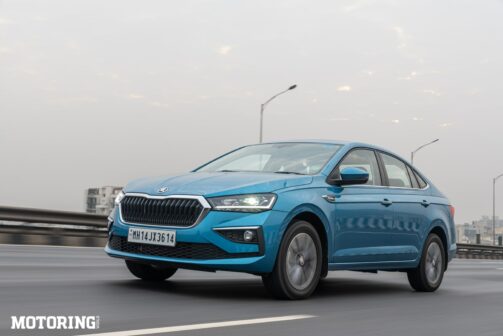 So far, this comparison has been a rather one-sided affair, with the Slavia soundly beating the City on nearly every metric. However, look at their respective price tags and you’ll see a massive Rs 4.11 lakh difference between the sportiest versions of the sedans. I honestly feel that the Honda is a very competent sedan, considering what you pay for it, but the Slavia feels like a more complete and modern product, if a pricey one. For those who are sold on Skoda’s new midsize-sedan but need to work within a stricter budget, there’s the almost as capable Slavia 1.0, which gets nearly everything the 1.5 does, and costs Rs 2.2-2.4 lakh less.