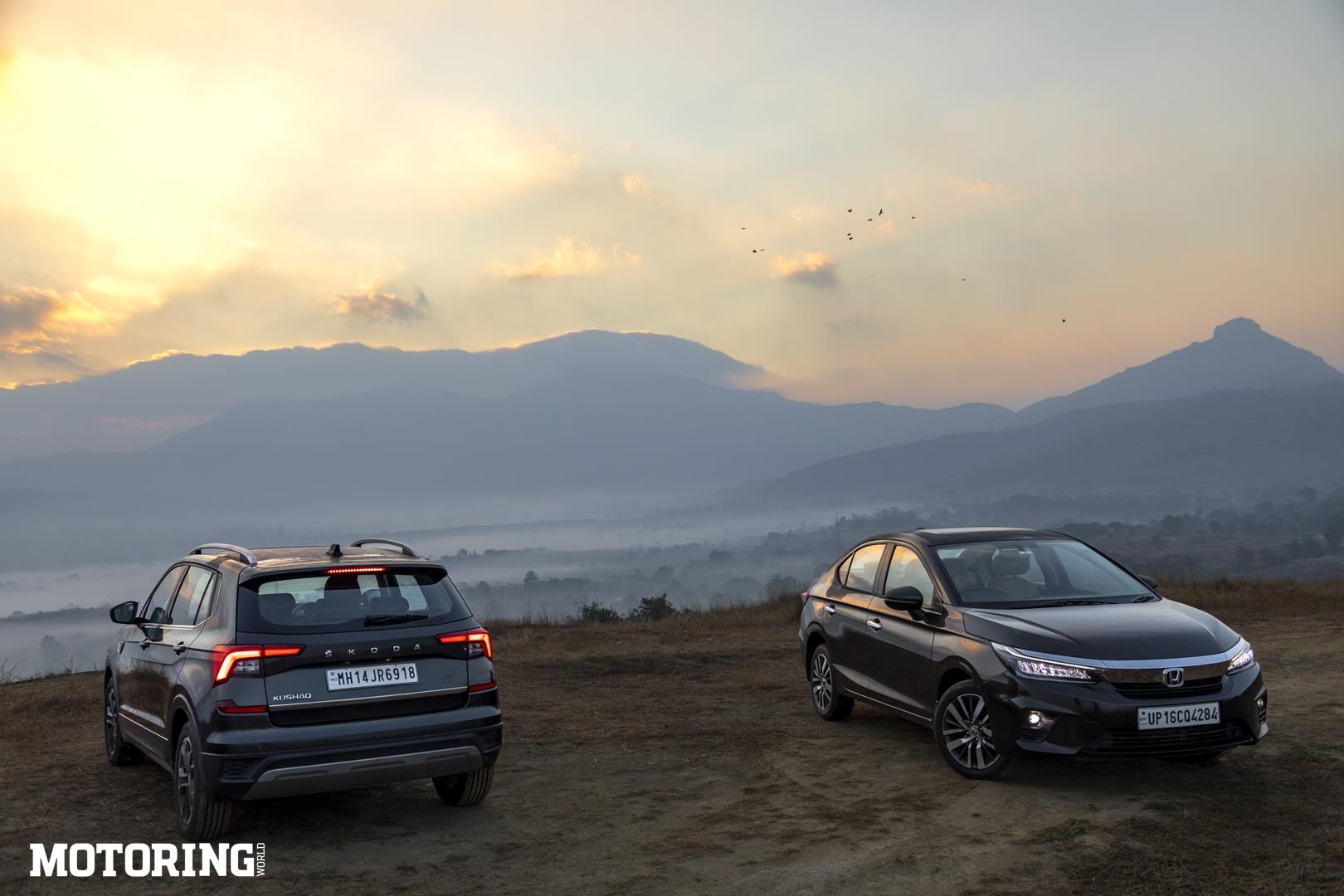 For the longest time, the ‘sport’ in SUV was something of a misnomer. These cars weren’t meant to be sporty in the traditional sense of the word, which was thought to mean a vehicle that possessed superior handling capabilities and sound dynamics. They were fun to flog around and were basically svelte, sleek cars. Well, the latter bit hasn’t changed, but there are some truly fun-to-drive SUVs available in the market, from the likes of the Lamborghini Urus to much smaller and more affordable models. Even at a budget of Rs 15 lakh, there are two options, and one of them is the Skoda Kushaq. 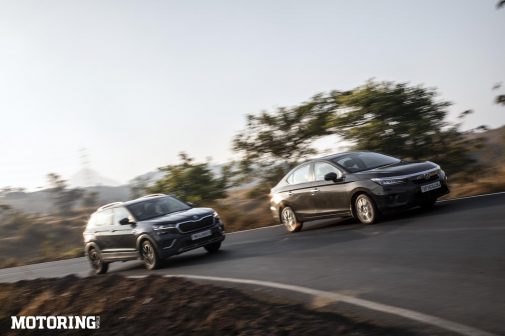 At a similar price point — at least to the 1.0-litre version of the Kushaq — is the Honda City. It’s been said before that the fifth-generation model doesn’t live up to its sporty predecessors in terms of its dynamics, but there’s inherently more athleticism to the sedan body style, or so I said to myself. I’m not the biggest fan of the mainstream shift to the usually boxy and upright SUV style, but after driving the Kushaq, I was coming around to it. This shocked the purist in me, which has led to what you see here — a test to find out if a sporty SUV can truly take the place of a sedan.

For this, I knew of an empty, twisty road just on the other side of Lonavala, which would be the perfect location to take the City and the Kushaq. On the way there, I came to realise the City holds down a bastion of sorts — it is among the last cars with a superb, naturally aspirated engine. Turbo-petrols have taken over, especially in this price bracket, and there’s no denying how engaging and punchy they can be. Still, I have to thank Honda for reminding me of just how much I love its free-revving 1.5-litre i-VTEC engine, and naturally aspirated units in general.

‘Shift down and zip past’ became a mantra on the uphill section, and this was accompanied by a now-seldom-heard and unencumbered note from the engine and exhaust. The butter smooth and precise gear shifts, along with the featherweight clutch, made it all the more enjoyable. Sure, there were moments when the Kushaq would surge out of tighter lower-gear corners in a manner that the normally-aspirated City didn’t quite manage. I put this down to the 3.36 kgm difference in torque between the two, but as the corners started flattening out and getting longer, it was the City — screaming away gleefully at 6500 rpm — that managed to put some distance between itself and the Kushaq. 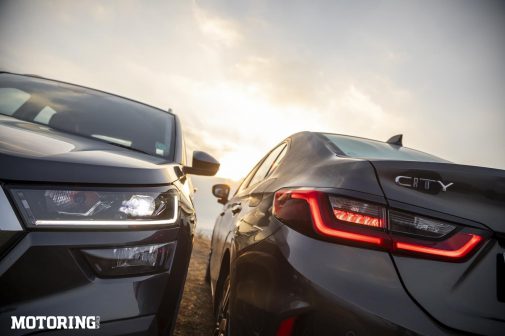 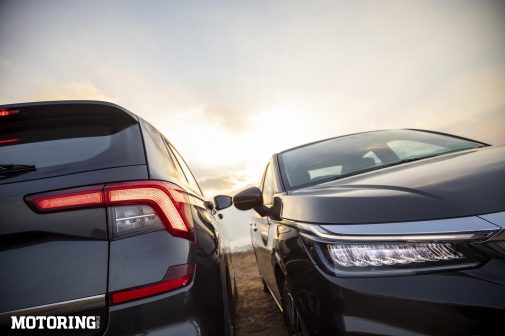 It was a pleasure to see the virtual g-force gauge in the part-digital instrument cluster swinging to over 2g when pulling out of corners. Wringing the engine to its max revs was seriously addictive, too, so much so that I found myself shifting to a lower gear unnecessarily just to hear the engine scream. That linear build of power and the level of refinement are rarely seen in this day of forced-induction engines, making the City an absolute delight to drive, at least in less demanding bends. The softly-sprung Honda does provide a cushy ride no matter its speed or the size of the speed bump (that bottoming-out sensation may kick in a little, though), but it’s not tuned for going around twisties quickly. The tyres are also a bit on the thinner side and give up early.

Looking at the Kushaq’s tyres almost pinching under pressure in the rear-view mirror, I noticed something that I would like to feel for myself. Switching from the brighter beige and grey Honda interior to the Skoda’s slightly more sober grey one, it struck me just how much the Japanese brand has done to make its sedan feel spacious. Despite the obvious advantage in vertical space, the City didn’t feel cramped by any measure when compared to the Kushaq. I’m still a sucker for analogue dials, which is why the Kushaq’s doesn’t put me off at all, though I can see why the City’s more modern part-digital cluster would be preferred by most.

With the driver’s seat at its lowest setting, the Kushaq’s driving position is still slightly higher than the City’s, which took away from the sportiness, adding one more tick on the side of the sedan. Nonetheless, the Kushaq is an entertaining drive and it is around those aforementioned tight twisties where it shines. Coming into a corner hard, the brakes feel a touch mushy, but speed is reduced dramatically. I felt the steering weighing up, I turned while shifting down using the marginally notchy gear shifter and matching the lower gear’s revs, and then stood on the gas pedal. Now I understood why the Kushaq’s tyres were pinching so, despite the tyre pressure monitor telling me it was normal.

Skoda’s torquey 1.0-litre turbo-petrol is a blast, and gels with the Kushaq’s stiff chassis and more dynamically set up suspension. I’ve said it before and I’ll say it again, it’s difficult to get more than 12 kpl from the Kushaq 1.0 on a fun road, and that’s because it’s seriously lively. Just keep the engine on the boil and don’t power out of a corner too early (understeer sets in then), and this SUV is happy to play the bull. A steering that is a bit more feelsome and upgrades to the brakes — maybe rear discs — would truly make the Kushaq an amazingly fun budget midsize SUV. 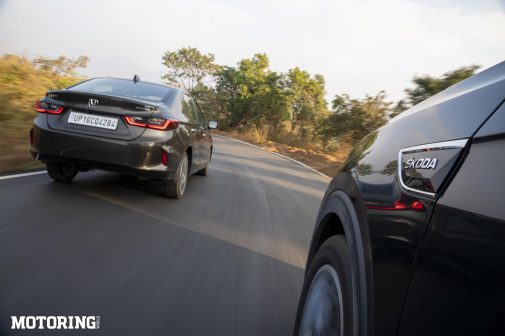 On the topic of upgrades, considering the fifth-gen City’s chassis is quite taut, the sedan would benefit greatly from a set of stiffer springs and wider tyres. Now, that sounds like a very worthy investment, one that’ll pay ample dividends in terms of fun on a set of corners. All in all, the Kushaq makes an excellent case for itself, leading me to agree that even in the arena of excitement on an open road, an SUV can be a very viable choice. The purist in me would be disappointed, but he does walk away hoping for one thing — a chance to drive the same cars with the previously mentioned modifications. That, I think, might change the outcome.