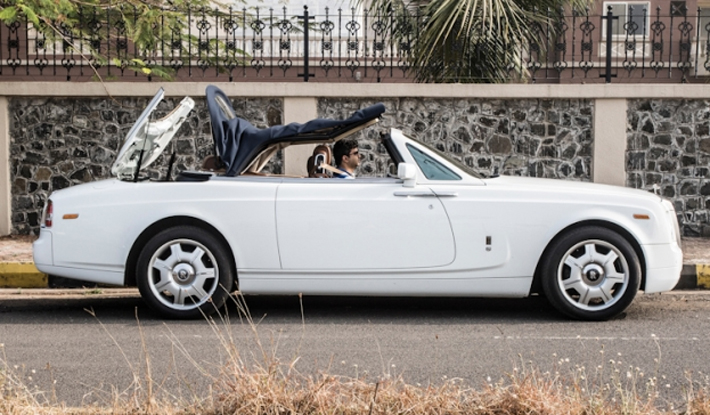 ‘Don’t worry about it. Discretion is the plaything of those who have something to hide.’ I noted the rather succinct point my cohort made, as I guiltily fired up the F-Type’s 5.0-litre V8 in the dead of night and made my way out of the driveway, all the while issuing a silent ‘Sorry’ to sleepy onlookers in my building.

This Jag’s really loud, but could you blame me? Like most people, I’m a victim of the primal desire to go stupidly fast whenever I can, and in a place like Mumbai, I can only in the dead of the night, when I’m not constantly surrounded by the cast of the Wacky Races. The restless 488 bhp sitting just a few feet away from my legs was temptation that I couldn’t pass up, though, so out the window went my conscience and I focussed on the wheel at hand. The disgruntled residents of my building could settle the score when they decided to have a ‘post-wedding party’ that ran into the wee hours. Again.

On the move, the Jag shatters your preconceptions, and fast. I remember eyeing it being rolled out of the showroom, spotless, eye-catching, loud, and it looked like it was raring to go places, and fast. I could cut this whole story really short and report that it is, in fact, stupendously quick, and has the ability to make you fall in love with it harder and faster than the first time you set eyes on Mila Kunis. That, however, would be doing a disservice to a lovely peculiarity that the Jag displays, not to mention the disservice I’d be doing to this article’s word count.

There aren’t many cars out there that display this peculiarity I mentioned. Cocooned in the driver’s seat, the top down, and your right foot exploring the depths of the accelerator pedal’s travel, you’re not focussed on fear as much as you’d expect to be at silly speeds. You’re not trying to figure out just how much you can push it, beyond which you’d just be a (bloody) statistic. No, your only realisation as you see your surroundings blur is that the Jag’s got your back.

You’re safe. You’ve been befriended. And it’s a wonderful friend at that. You’re going to want to squeal, laugh, clap and exclaim at everything it does, pretty much like you’d be doing at a Jim Jefferies stand up. You’re going to want to run up a list of made-up adjectives that do better justice to the Jag. You may be going well over the speed limit, but the F-Type kind of slows things down for you while at it, almost as if it’s altering space/time and giving you the pleasure of enjoying it all for just that bit longer. You’ll wonder where it’s been all your life when you feel the tail kick out at the slightest provocation, or when you hear it crackle and pop off-throttle. It’s a hoot.

Taking nothing away from the gorgeous lines of its coupe sibling, I think there’s a lot of charm that the F-Type exudes, primarily because it’s a convertible. We’ve had this romance with drop-tops for ages now, and the issue you hold in your hands is a testament to that. The concept of convertibles is, understandably, not a popular one in India, but that stops no one from gaping and gushing at one when it drives past, and I don’t think I’ve ever seen as many dropped jaws, pointing fingers and excited jumping around as when the other car on these pages, the Rolls-Royce Phantom Drophead Coupe, showed up one bright, early morning on the outskirts of Mumbai for our photo-op.

It’s difficult to find the precise words, but there’s a certain authority and dignity that just screams its presence the moment you’re around the Rolls. It feels like a car that’s not to be trifled with, an esplanade where your net worth is on display at all times, and quite literally as well, considering it’s a drop-top. Its mammoth proportions will dwarf pretty much anything else on the road, misplaced egos included. It’s tastefully, painfully and very simply elegant, the Phantom. The ideal red-carpet ride for you and your plaything, really.

The obvious conclusion one can draw from seeing two cars featured in the same article is that there’s some sort of comparison that’s imminent. Pardon the fact that there will be no showdown as such. The Jag and the Rolls are two vastly different machines, and trying to draw parallels would be pointless, to say the least. The reason they share the same space is because they represent a somewhat similar ideology: opulent open-top motoring, but that’s it. That’s where the similarity ends.

It’s not too hard to see why, either. Stepping into the Rolls after the Jag’s snug cabin is like going from a studio apartment in Andheri to the colossal ridiculousness that is Antilla in South Mumbai. You don’t as much drive to point B as much as lounge to it, curiously aware of just how ridiculously opulent things are around you all the while. I’m willing to wager that people driving around in these are way more prominent and visible than the rest of us to alien life forms peering through their version of a telescope — it’s that big.

The differences keep adding up. Where I was smitten by the Jag’s impeccable road manners, I was just amused by the Rolls’ behaviour on the road. You’re certainly not going to be in any danger of waking your neighbours up at night when you fire it up; a 6.75-litre V12 it may have under the hood, but I wouldn’t be surprised to hear it’s powered by a bunch of electric motors. It’s eerily silent and an antithesis to the cacophony of violent noises that erupt from the Jag every time you mash the throttle pedal. Then there’s the ride — the Jag makes you ask yourself whether you have multiple puncture wounds in your tyres, compared to the magic-carpet-esque way the Rolls drives over everything. The steering feels like it’s connected to mush, and the power delivery is quick, but it epitomises linearity — none of that head-pinned-to-headrest-under-acceleration kind of urgency here. If you’re planning to go around corners with any sort of quickness, I’d advise against it. Not only will the steering inspire you zilch in terms of confidence, you’ll probably have to count to five before the rear half of the car catches up with the front.

One of the ways to interpret the words on these pages is to conclude that I’m partial to the Jag, and that’d be quite a bit off the mark. The Phantom is a car that’s incomparably different to the F-Type. You’ll find little else around that’s as apt at defining opulence as the Rolls does, little else that says you’ve arrived in life in the same way, and we all know the kind of statement a Rolls — any Rolls — makes. It’s a beautiful piece of craftsmanship that deserves all the praise and exclusivity it’s showered with. I, for one, am glad cars like the Phantom Drophead Coupe exist…

…because it helps me realise why I love driving cars like this Jag so much. The F-Type, especially in this, the 5.0-litre V8 drop-top S spec that I’m in, is a hooligan that loves making you absurdly happy. It’s precise, it’s direct, it’s straightforward, absolutely gorgeous with its top off, and goes like stink. The more you get to know it, the more attached you get, leaving you with an insatiable urge to devote countless hours to it. That’s heady praise for a car that is highly impractical in a place like India, costs a fair bit, only seats two, and has enough storage space for a toothbrush at best, but that’s not really the point, is it? No amount of words can help overturn any of the shortcomings I just mentioned. That said, you need no more than a few hours driving an F-Type to realise that it’s a keeper. You’ll forget all about any limitations it has and focus just on that fat grin you’ve got on while you’re with it. Sounds like just the right recipe for a good friend, really.

My drive in the Rolls was confusing, honestly. I’d spent the last two days with the F-Type, having the kind of fun I believe I would indulge in only in the knowledge that the world would be ending the next day. It happily obliged, and I was happy and laughing right through. The Rolls… well, you’re more serious in it, more aware of your surroundings, more self-conscious. The kind of audience it would appeal to wouldn’t be interested in boring things like fun, and laughter, and enjoyment. They’d spend their nights discussing their recently curated paintings and smoking cigars, blissfully unaware of the F-Type blasting past in a blur right outside the tasteful and elegant restaurant they’re in. They’re worlds apart, these two.