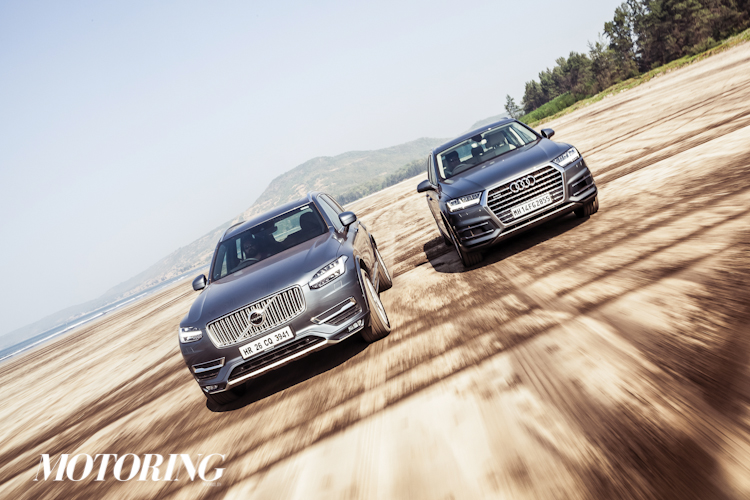 What can one possibly want when it comes to the biggest vehicles you can buy, save for a Unimog? A lot, as it turns out. The Audi Q7 made the segment wildly popular, thanks to its association with film stars. The Mercedes GL was the first of the big SUVs to offer decent third-row seating. Of late, the XC90 has been sitting pretty at the top of the SUV pyramid, but the new Q7 is around the corner. Does it manage to usurp the Volvo’s position?

IS THE Q AS XC AS THE VOLVO?

Both yes and no. The Q has grown visually, both in width and length, though it actually has shrunk by 37 mm in length, 15 mm in width and 3 mm in height. There’s a new face — one with a large silver hexagonal grille. It isn’t chrome (although undoubtedly there are rappers putting down money for just such a thing right now) but a matte-finish silver that lends aggression without being ostentatious. The large hexagonal central element integrates neatly with the bumper, which in turn has large intakes for the intercoolers that help with the aggressive look. Twin silver horizontal slashes split the intakes, reducing the vertical element and adding a premium touch. At the bottom is a faux skid plate in silver. The new headlamps are larger, and you can make out that they’re a combination of standard projector headlamps and LED. More on them later.

From the side, the Q7 looks a little longer, with the rear overhang being especially prominent. Our test car was shod with lovely five-spoke 19-inch rims that although looked a wee bit smaller than was ideal, contributed to the sublime ride. At the back, the new tail-lamps have an undeniably cool design for the light guides. The rest of the rear is a clean design, with the exception of the bumper, which has way too many elements to be called ‘neat’ — there are the reflectors, reversing lamp, fog lamp, integrated exhaust tips, the faux skid plate and the horizontal crease separating all these elements. On a grey car like our test vehicle it isn’t as visible, but in bright colours it is too busy — but let’s face it, the chances of someone buying a bright-coloured Audi Q7 in the Indian market are less than that of Mia Khalifa starring in  Bigg Boss.

The Volvo takes the same formula as the Q7 and gives it a Scandinavian spin. Some might say that the running lamps look like Oriental eyes, but those almost-vertical elements at the ends add their own twist to them. They really are reminiscent of Thor’s hammer, as Volvo describes them. They’re also all-LED lamps, which means that to the majority of India, the absence of a bulb, reflector or projector lens appears like magic. The grille gets a similar silver treatment as the Audi, but it is a lot smaller, with more aggressive vertical detailing and the logo and diagonal slash we’ve become so used to seeing on our long road trips in public transport.

The XC’s front bumper is possibly the largest we’ve ever seen and it does have a lot of elements, but it isn’t half as aggressive as the Q7’s. There are a couple of horizontal chrome elements where one would expect the intakes for the brakes, and at the bottom, right at the corners, are static LED cornering lamps. These can’t be good news for drivers with bad judgement. The required faux skid plate is at the bottom, and the inner longitudinal crease on the hood that changes its mind at the last minute and ends up following the headlamps is a lovely touch. From the side, the XC reveals its aspirations as a comfortable family car, having retained a profile that is part SUV, part estate car and not exciting. However, the 20-inch multispoke rims fill out the wheel arches nicely and the flare of the wheel arches is an interesting detail, it being a groove of sorts. Once you get to the rear, the tail-lamps redeem the design once again, the long vertical light guides offering a sight like no other. The rest of the rear is a clean design, including the bumper, which only houses faux exhaust tips in the faux skid plate.

Round one goes to the XC, then, for a fresh design that turns heads no matter where you are. The Q7 is imposing, yes, but nothing makes you go ‘wow’ the same way the Volvo’s design does.

As expected, the interior of the Q7 builds on previous designs and takes it a step ahead. The steering wheel is a familiar four-spoke unit with buttons to control the usual functions and gearshift paddles behind the wheel. Among the new things are the instrument display, which is an HD colour display that can show you a number of things, including the map from the sat-nav. Also contributing to the ‘wow’ factor is the pop-up MMI display that rises up silently from the dash when you start the engine. This can be controlled with the MMI click wheel and there’s also the writing pad that can be used to ‘write’ out addresses for the navigation with one’s finger. The gear shift lever itself is now straight off a luxury yacht and reverts to its default position after a mode is selected, much like the levers in BMWs. There is four-zone climate control, a rear-seat entertainment system, two USB ports and the sound is piped through a Bose audio system.

The faux air vent on the passenger side is a nice touch, as are the touch-sensitive air-con controls that also operate like normal. The front seats have great support, even if they can be too firm for some. The middle row lacks a little thigh support, but it is good enough for the normal-sized Indian. The improvement is in the third row; before where Audi itself used labels telling people above 5’3” to stay away from them (the reverse of the fairground rides, we always thought), now a full-size adult can spend a couple of hours in relative comfort. Access to the third row in the Q7 is also much better than in the XC. The trade-off is the space-saver spare: there’s a strange mounting point in the cabin which takes up a third of the boot, and eliminates use of the right seat in the third  row completely.

The Volvo trades buttons for a 9-inch touchscreen mounted on the centre console. This is the dominating feature of the cabin, because there’s more buttons on the steering wheel than the centre console! And that’s even with paddle shifters missing — something that Volvo really needs to add to this car. There’s a conventional gear lever and a similar instrument cluster to the Q7’s, an HD colour screen with the ability to show you everything you could possibly want on it. Everything is swathed in leather and wood, but unlike ze German, it chooses to leave the wood unlacquered, which contributes heavily to the special feeling. The touchscreen unit takes a little while to get used to, but once that speed bump is crossed, going back to an ‘ordinary’ system with buttons feels so, well, ordinary.
There is direct access to functions like the climate control and shortcuts to all the important functions and today’s touchscreen generation will take to it like a fish to water.

In addition, the Bowers and Wilkins audio system is top-drawer stuff and makes us wish we’d carried along original audio CDs instead of just mp3 files along on our drive. Accessing the third row is a bit of an exercise in contortion for a large adult, but this third row is definitely right up there with the best. Even better, the space-saver spare is hidden under the boot floor, which means that the third row and the boot are useable all the time. Speaking of the boot, the Volvo offers the very cool ‘sweep your foot under the rear bumper’ opening and closing function, so if your hands are full, it’s no trouble opening or closing the boot as long as the key is in your pocket.

Both cabins are quiet and comfortable places to be in, with no noise intruding from the outside world. The Volvo engine is a little vocal when cold, but the Audi is petrol-silent during almost all operation. The LED strips that light up in the Q7’s cabin are undeniably attractive, but the Volvo with its crystal-cut buttons and ‘iPad’ are on a different level of cool, and not just because it is unique.

Round two goes to the Volvo, the Q7’s refinement just not enough for the Volvo’s Scandinavian cool and great packaging.

DOES THE GO MATCH THE SHOW?

The new kid on the block is the Q7. The important bit? It weighs 300 kg less than its predecessor. And it makes more power and torque at 268 bhp and 61 kgm. All this power is sent to all four wheels via a ZF 8-speed transmission and the quattro all-wheel-drive system sends 60 per cent of the torque to the rear axle. It is capable of sending upto 70 per cent to the front axle or 85 per cent to the rear one, depending on the situation.

The Volvo comes underequipped to this comparison in the engine department. All it has is a twin-turbo four cylinder diesel that displaces 2 litres. It generates 222 bhp and  47.9 kgm, and lays that power down to all four wheels via an 8-speed transmission. The sequential turbos work brilliantly with no flat spots at any point in the rev range. The motor runs out of revs quite quickly, which can be interpreted either as sporty or just lack of pace, but it has enough for everyday use. It is only when compared to the Audi’s incredible power output that it feels like it has brought a knife to a gunfight. The addition of paddle shifters would have made working the Volvo’s motor a whole lot more fun.

Both SUVs use a similar suspension setup, with air damping and adjustable ride height. Both offer different suspension modes for different situations, with an individual mode in which the user can tailor the throttle response, gear shifts, suspension damping and steering assist. The Q7 has a lot of bobbing motion (any relation to the yacht-style gear lever, we wonder) if the road has the slightest imperfections. It isn’t the best ride for those who get carsick and things get better in the Dynamic mode, but never does it get truly comfortable.

The Volvo, on the other hand, has a ride that is a little choppy and the 20-inch rims don’t help. Volvo has been getting the same complaint from markets over the world and it says a software upgrade, at least for the Comfort setting, should make it ride more like a car from its class. The Q7’s light weight and better all-wheel-drive system make it very nimble, especially in the Dynamic mode. The Volvo tries hard to keep its composure, but it is more suited to calm cruising rather than a spirited run down the highway.

Round three is an even split between the two, the Audi’s light weight going for it, but the incessant bobbing working against it. The Volvo’s choppy ride, especially over sharp ridges, earns it negative points.

Which one should you get, then? You won’t go wrong with either — there’s so much right with both of them. The Q7 is dead reliable and can teach some sporty sedans a thing or two about acceleration. Variant to variant, the Q7 also offers much more performance and a little more technology at the same price. However, the Volvo, despite its smaller engine and choppy ride, won our hearts with its simplicity and sheer novelty factor. If it’s bang for your buck you want, the Q7 is what you should get. We, though, will stick to the Volvo for now. M