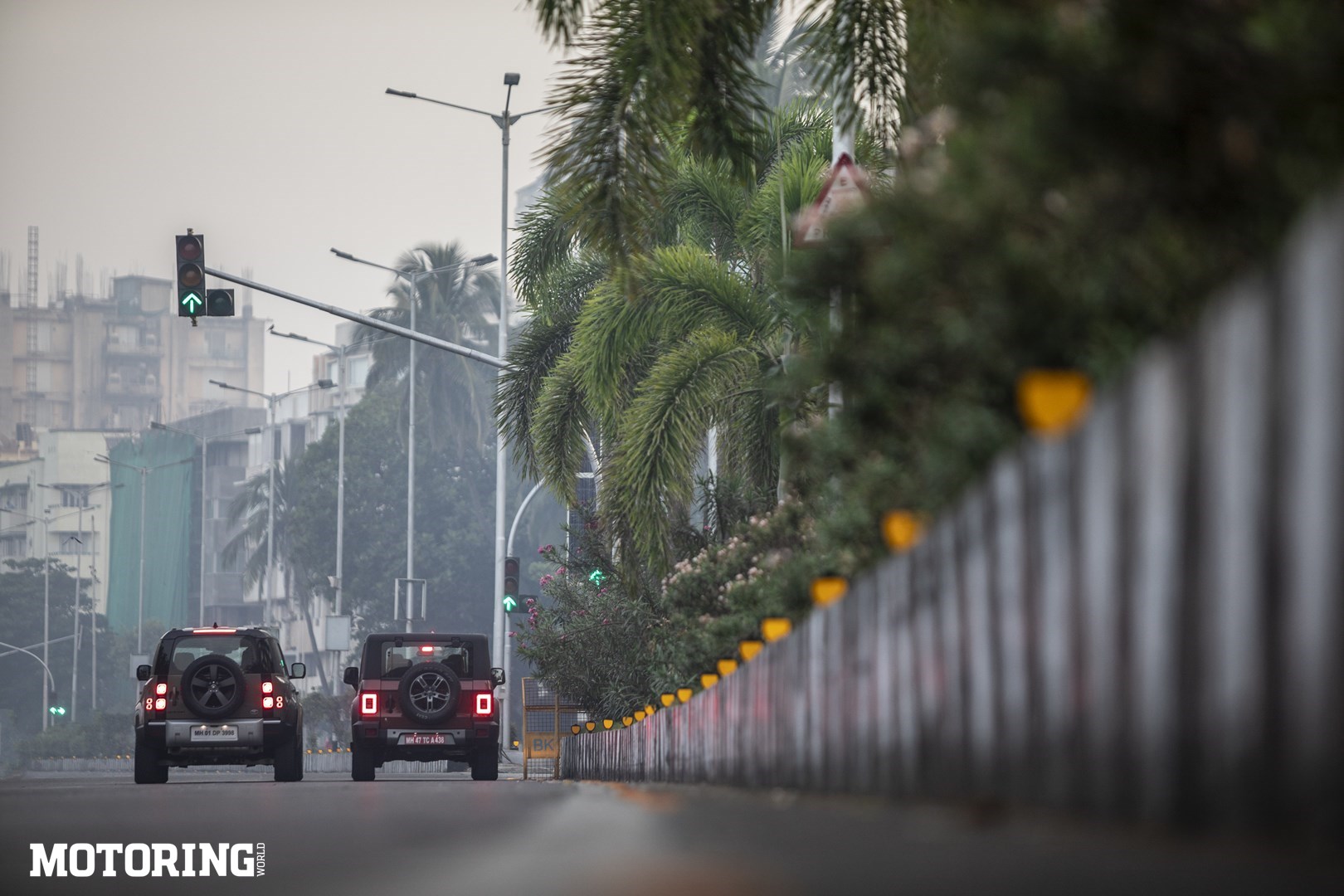 ‘Sand, snow, and rocks? Broken paver blocks, cracked concrete and questionable tarmac, that’s your ideal mode selector,’ I thought as the Defender softly thudded over yet another unavoidable section of Mumbai’s infrastructure. This Land Rover’s sophistication was quietly rubbing off on me, too, as I noticed myself making remarks to an imaginary butler; ‘I say, Jeeves, isn’t that Thar too close to our posh posterior?’ The Defender’s excellent ClearSight rear-view mirror was always filled with the Thar’s face, its bumper a chin that Jay Leno would be proud of. But what were we doing in South Bombay with these two unlikely partners for a day?

Well, to quote an old one, there’s many a slip between cup and lip, and those slips are where modern off-roaders endlessly commute. The attractive image of an SUV and the chastening fact of being a buyable commodity mean that, more often than not, approach angles are tested on nothing more than speed breakers and flyovers. Wading depths are useful in the monsoon, though. We don’t often get two important 4X4s in the same year, at least none with the history and tradition that these two tow along wherever they go. And I also thought that these two might look good together, which they do. That’s quite a lot of intent in one frame, caged in a sleepy urban morning.

The cyclists and joggers of Nariman Point, all externally loud and internally miserable, slowed to take in the sight of these two formidable machines, even those who seemed occupied with the inadvertent invention of new forms of recreational locomotion; what they were doing, I could not recognise. Speaking of which, there’s really no mistaking the Thar for anything else; in fact, I’m sure many people call the Wrangler a Thar, and I wonder how Jeep might feel about that. The Defender, as distinctive and imposing as it is, may not be as recognisable. I mean, yes, I know what it looks like, but many people might just think they’re looking at some Land Rover or the other. Perhaps that’s why it has its name right across its face. 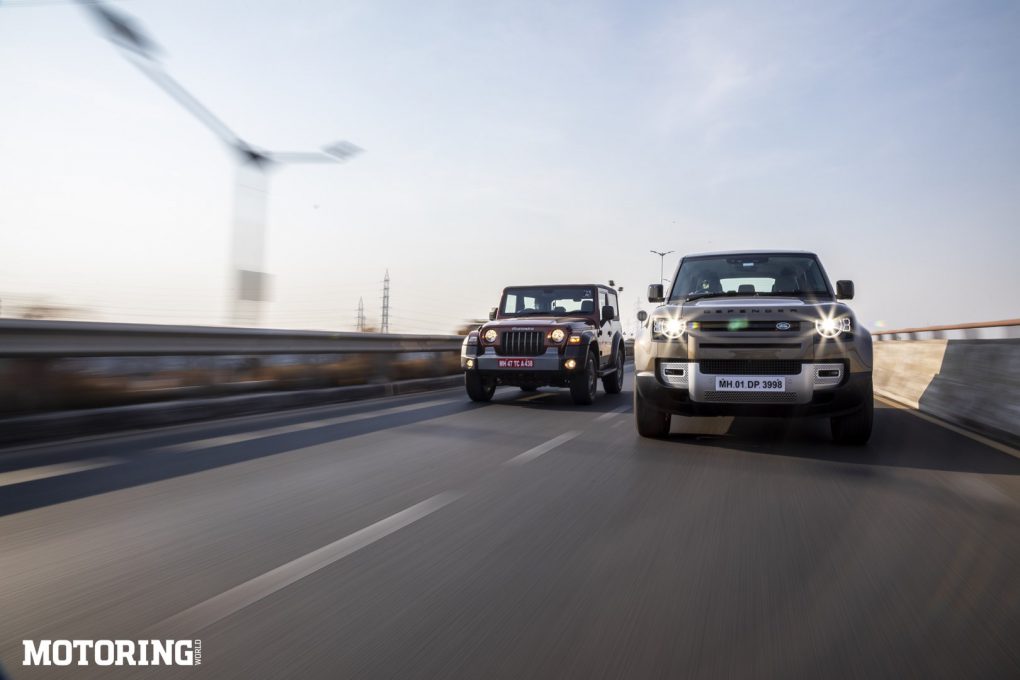 Separated by a good Rs 73 lakh, there’s not much the Thar and the Defender have in common except websites full of Nat Geo commutes with sneaked-in glass-faced buildings as subliminal cues. Oh, and their brochures keep throwing the word ‘reinvented’ and ‘reimagined’ at you. Not ‘recreate’, mind you. It was impossible to remake the original Defender with today’s rules and regulations, so the growing up and modernisation of that idea was inevitable. At least that’s what I told myself, even as the G-Class sniggered at the back of my mind. It was a good thing that the Land Rover’s visual flair also translated to its driving feel.

The Defender’s true nature hid in the way it swayed gracefully around town, mourning its deprivation of natural obstacles. Of course, there was body roll; if that’s an issue, go buy any SVR. For a large SUV with a chest-high bonnet, the Defender was easy to drive, and it sent cyclists scrambling for their lives. It wasn’t exactly nimble, but I suppose we’ll have to wait for the Defender 90 for that. With 296 bhp and 41 kgm on tap, it hauled itself around with admirable gusto, reaching well into triple-digit speeds before I knew what was happening; ‘I say, Jeeves, that’s a jolly good trot we’re on!’ I did, however, start grimacing every time traffic got too close for comfort; a scratch on that ‘Gondwana Stone’ paint job was not something I wanted on my conscience.

At traffic signals, I discovered that the same button that raised the Defender’s suspension also dropped onlookers’ jaws. However, on one occasion, I forgot that I’d raised it and almost fell out the next time I tried to exit the car. The Defender’s ride height can be adjusted from 40 mm below normal to a full 145 mm higher. That’s just mad, and quite a launch pad for thoughts such as, ‘I say, Jeeves, how many cyclists might fit in the new basement?’ An electronic package more comprehensive than the Oxford dictionary is firmly in charge, and the Defender did everything short of driving itself. The Thar was exactly the opposite.

If the Defender was a stately opera, the Thar was a rock concert. Its short-wheelbase willingness to bound around made me wish harder for the Defender 90. Maybe once it’s here we’ll take the two off-roading. To put it shortly, the Thar felt like a true modern classic, which it is. Hustling the 130-bhp diesel along asks for an enjoyable flurry of steering actions, throwing the 6-speed gear lever in the required direction, and two feet dancing on three pedals. If that sounds involving, it is, and it never gets boring. Ride and handling are hugely improved; keep it below 120 kph and it almost feels like a normal car. Almost, but not quite, since its off-road nature won’t ever let it become completely tame. Who wants that in a Thar?

With 226 mm of ground clearance, the Thar was up for anything, and with cheaper and easier-to-fix mechanicals, I suppose I’d be more willing to bash it around. However, except for simply trying out that delightful transfer-case lever for the sake of it, I had no use for it in the city. There was no imaginary character to hear my laments nor any traffic-signal party trick to lighten the mood. The Thar’s doors are meant to be easy to remove, but that might’ve been an odd thing to do at a zebra crossing. Also, after the Defender’s luxurious, configurable, interactive, assisting, sensing and adjusting interior, I’d happily eat a burger in the Thar. 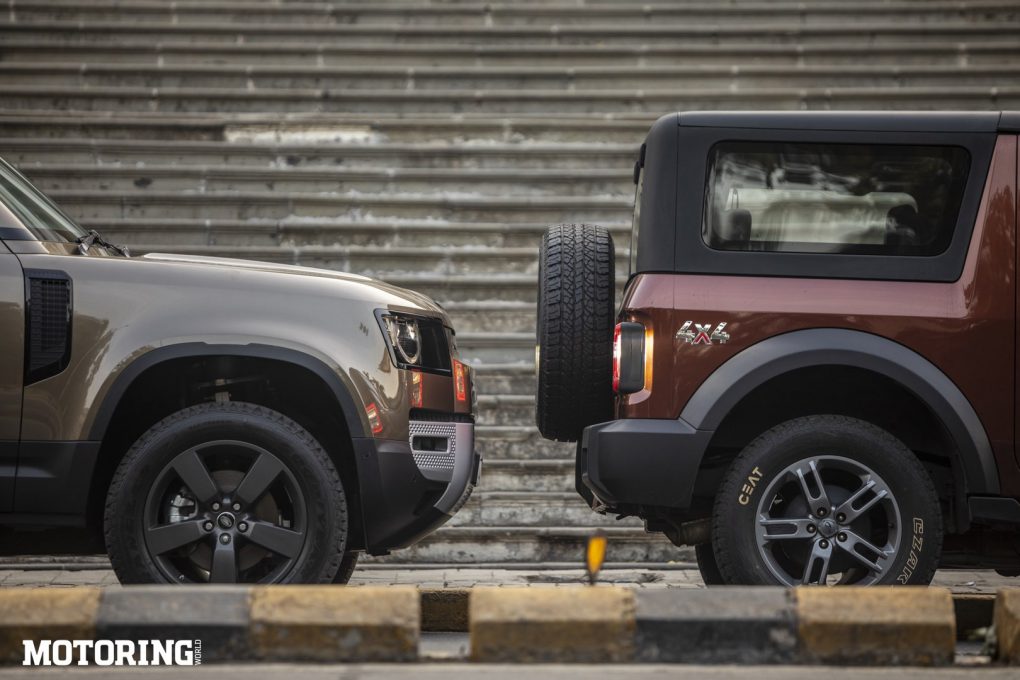 The new generations of the Thar and the Defender are several leaps forward, though Land Rover has likely leaped into orbit with this one, astronaut-butler and all. Then again, I wonder if I’d nonchalantly drive the Defender to the middle of the Kalahari for lunch, and if Land Rover’s roadside assistance could reach me in time for dinner. I imagine someone buying both, though, the Defender off-roading to office and the Thar digging trenches on weekends. Or maybe just the Thar, as it is now well capable of being someone’s only car. Then again, I’m a guy that lives in one of the greatest messes of civilisation, and not in a place yet to be mapped where all radio stations play static — like literally every single person who will buy each of these. But that’s not the point, is it?