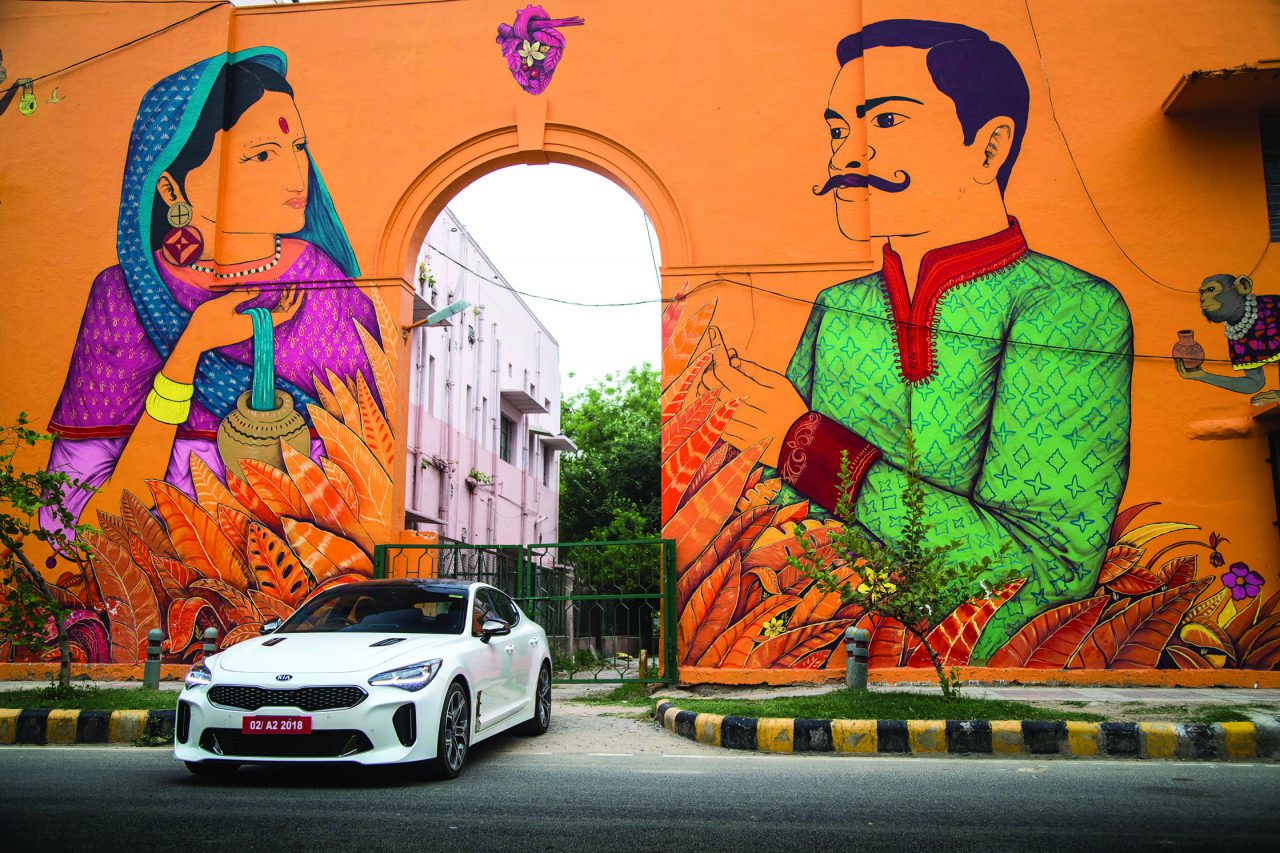 Like the Yin and Yang? We take a look at the Kia Stinger GT’s design

Function and form, you say? Isn’t that a bit oxymoronic in the conventional sense? I mean, of course, there have been cars that look good and are equally outstanding at their job, but not a lot of cars have brought function and form together. Kia, a popular Korean manufacturer which formally enters the Indian market with its first India-bound product this month, emphasises a lot on its design prowess. Keeping that in mind, and following the exclusive studio photoshoot of the loveable Stinger GT that we did last month, we wanted to see if function can actually meet form — maybe somewhere halfway.

Looking at its array of products available globally, it’s very clear that Kia doesn’t do boring. Especially with the current models, which cater to a variety of market segments and customers, the company has an undeniably strong identity, which works well with people regardless of their taste in cars and more importantly their age. With something like the Stinger GT, it’s clear that Kia wants to target the young at heart. Because not only is the car blisteringly quick, it also celebrates motoring and the ability to make people stop in their tracks. 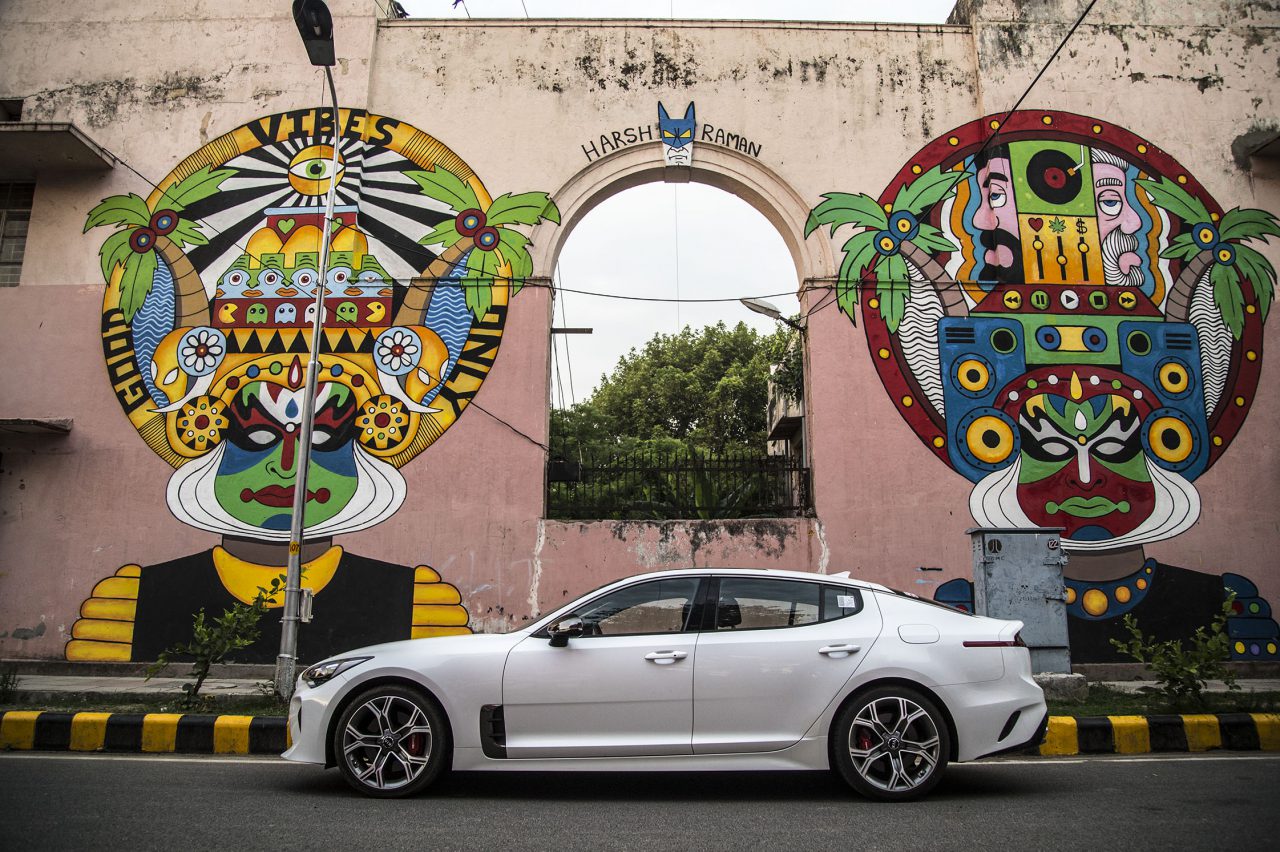 With its demographic clearly defined, we thought of introducing the Stinger GT to what is essentially the most popular and widely appealing form of art: street art. Through amateur graffiti on subway walls to government-backed beautification projects, street art has found patrons across the country. But in order to appreciate what’s possibly the creme de la creme (much like the Stinger GT), one needs to look where St+Art’s continued efforts have transformed locales. Lodhi Colony in Delhi is no longer just quaint and quiet, its tastefully painted walls now tell a variety of stories, and are enjoyed on a daily basis by onlookers like yours truly. 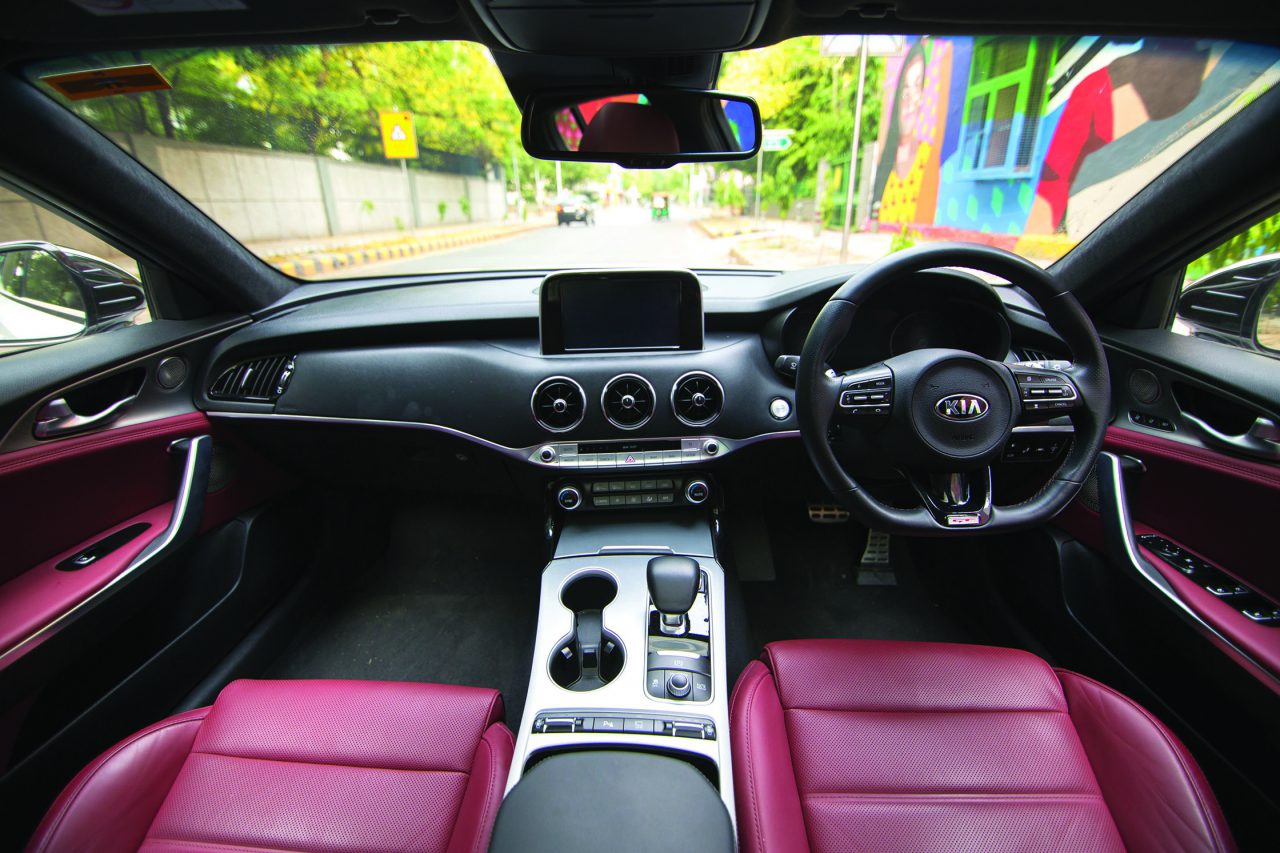 The Stinger GT seems quite fitting parked next to artist Saner’s gargantuan work of art (feature image), which, according to its artist represents philosophies of enlightenment and self improvement. The grand tourer is possibly the best representation of Kia’s extensive efforts in design and quality. While you must have read in detail about the car’s styling, its origins, and how it came to be, seeing and being enchanted by the Stinger GT in the flesh, even when against an engaging backdrop, speaks volumes about its design. 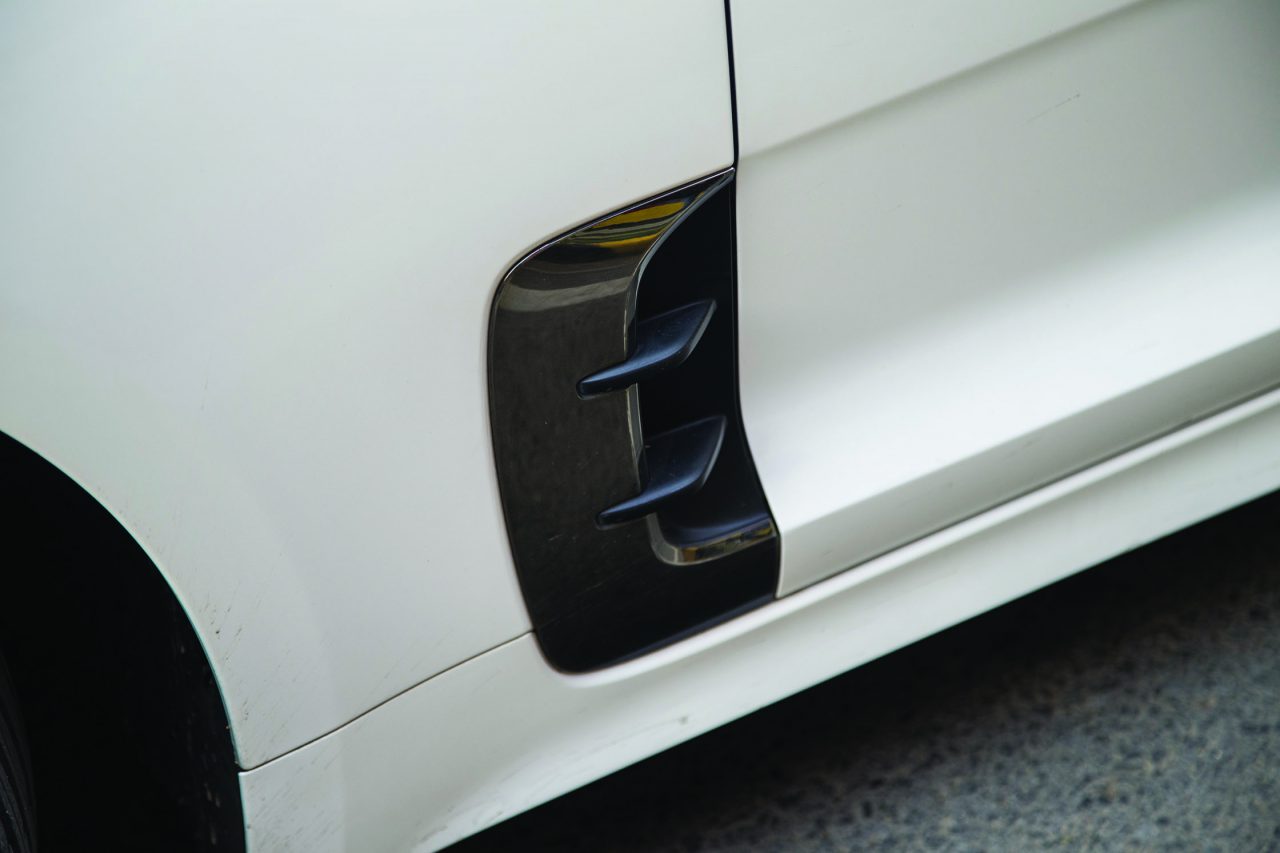 It’s beaming with detail, the artwork, but the Kia isn’t unarmed, either. Even if you look beyond the usual things that intrigue the onlookers, the Stinger GT has a lot to offer. Let’s look at the important points first. Take the Tiger Nose, for instance, a feature so deeply established within the modern Kia design that it almost symbolises what the brand stands for. It gives the front a very identifiable poise that can’t be mistaken for anything else. The air dams further add aggression, and the side vents and the ones atop the bonnet double up as an indication that the Stinger GT can also walk the talk. Or looking at the performance figures  (0-100 kph in less than 5 seconds), it rather sprints the talk. 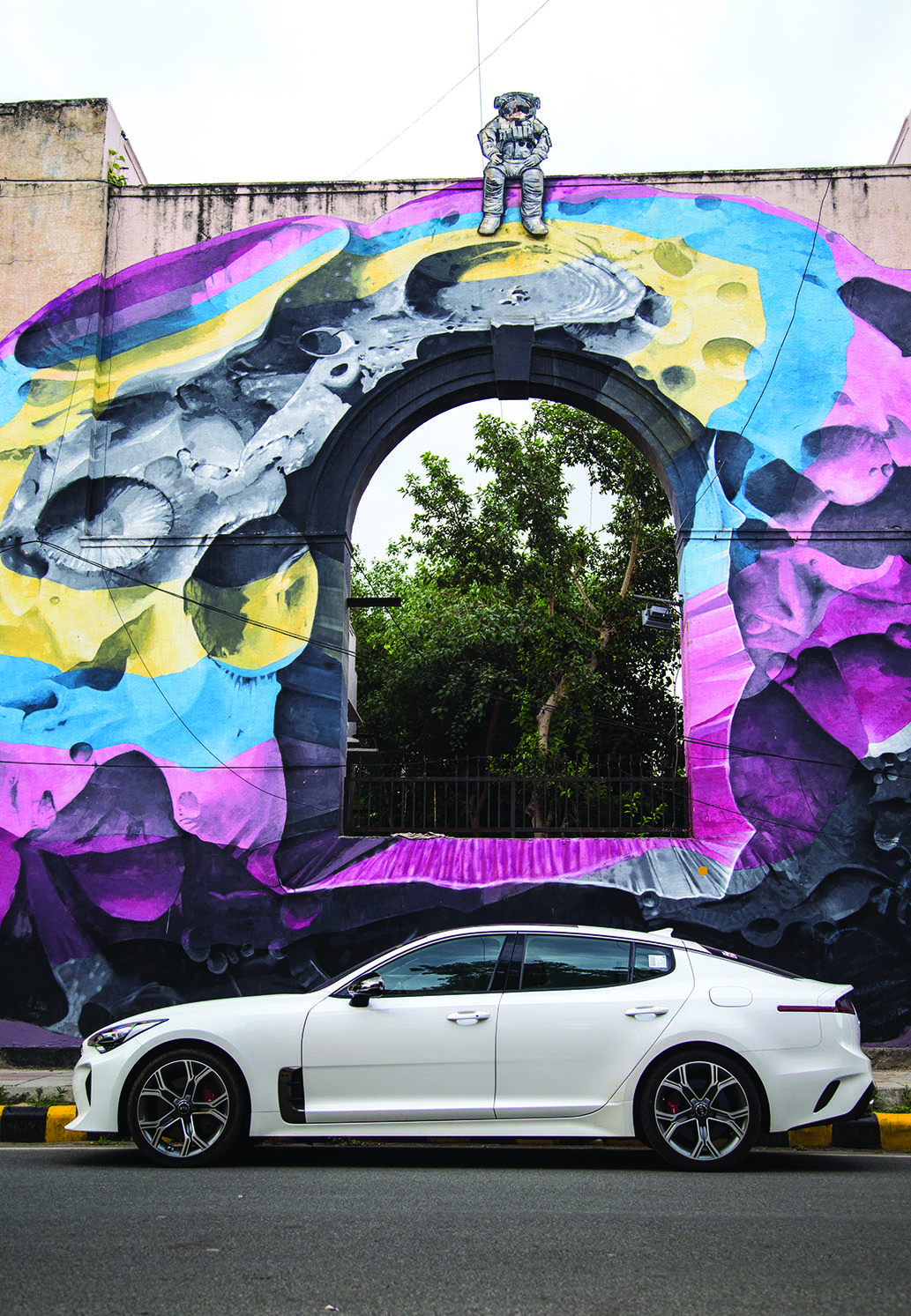 We made a quick dash to another of our favourites from the painted walls in Lodhi. It is Nevercrew’s See Through/See Beyond. One look at it, and you can’t help but wonder if the astronaut perched atop the mural looks at the Stinger GT, appreciating its fastback styling, which even in this shade of white, can shame many a rival. From where the mere mortals are gonna see — at eye level, while stood by the car — the Stinger GT impresses with its well-executed DLO. It’s possibly the only modern car we know of that looks imposing and sharp even with a bulky C-pillar. The mural represents how art proves to be gateway away from the mundane. And what’s the astronaut doing here, you must ask, as you must’ve wondered while watching Kia’s hugely enjoyable adverts. The answer to that is fairly simple. Both the artists and Kia shared the same idea behind placing the suited character: to represent the most amazing achievement by mankind. 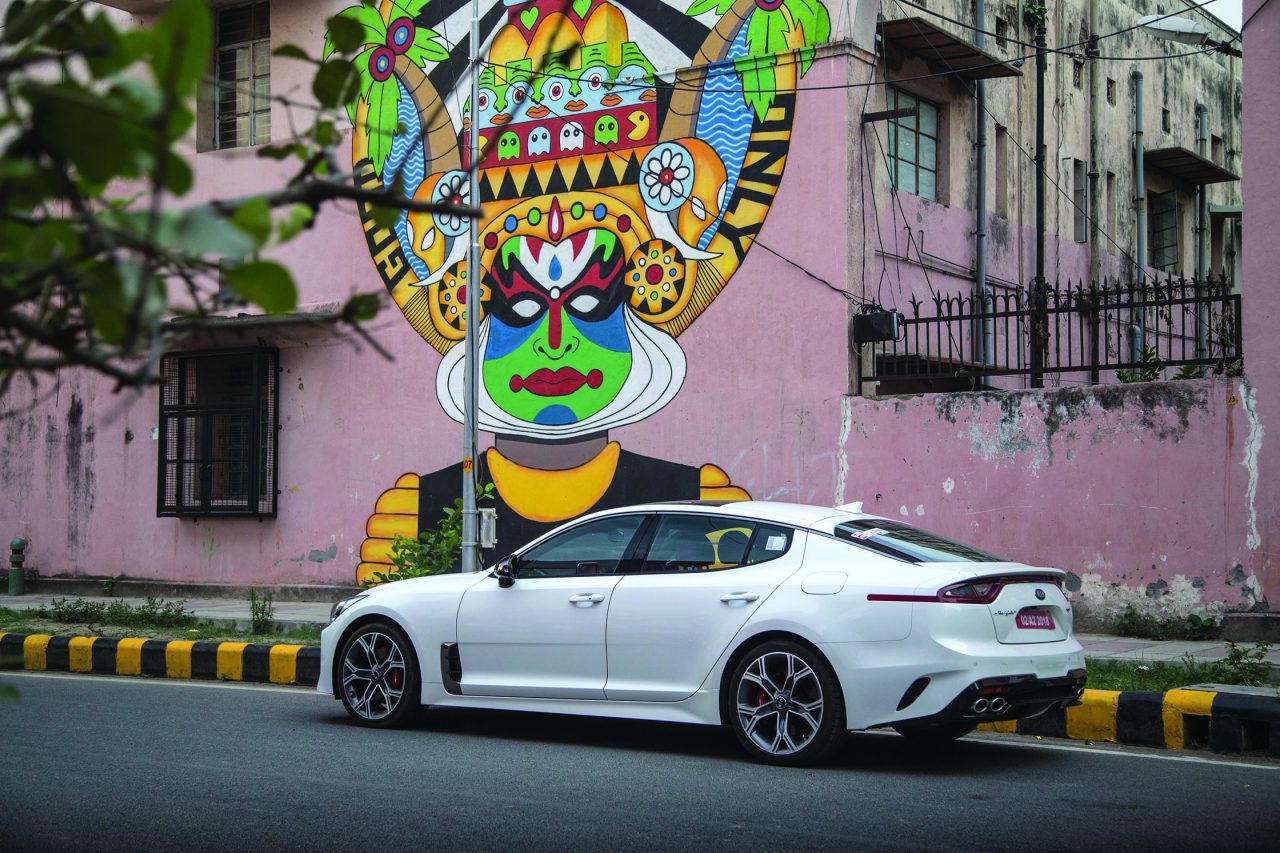 The Stinger GT is also a hero in its own right, too. It manages to quash the conventional image of a car brand. And it’s a testament to what a bunch of experts can do if they’re provided with the right set of tools and resources. Be it through the continued chiselling of the clay models by designers or fettling by chassis engineers, the Stinger GT is a product that quite effectively brings function and form together, unlike any other car in the recent times. The Kia mid-SUV will do exactly that when unveiled this month. And Kia is sure of its first product for the Indian market. We have absolutely no reason to think otherwise.