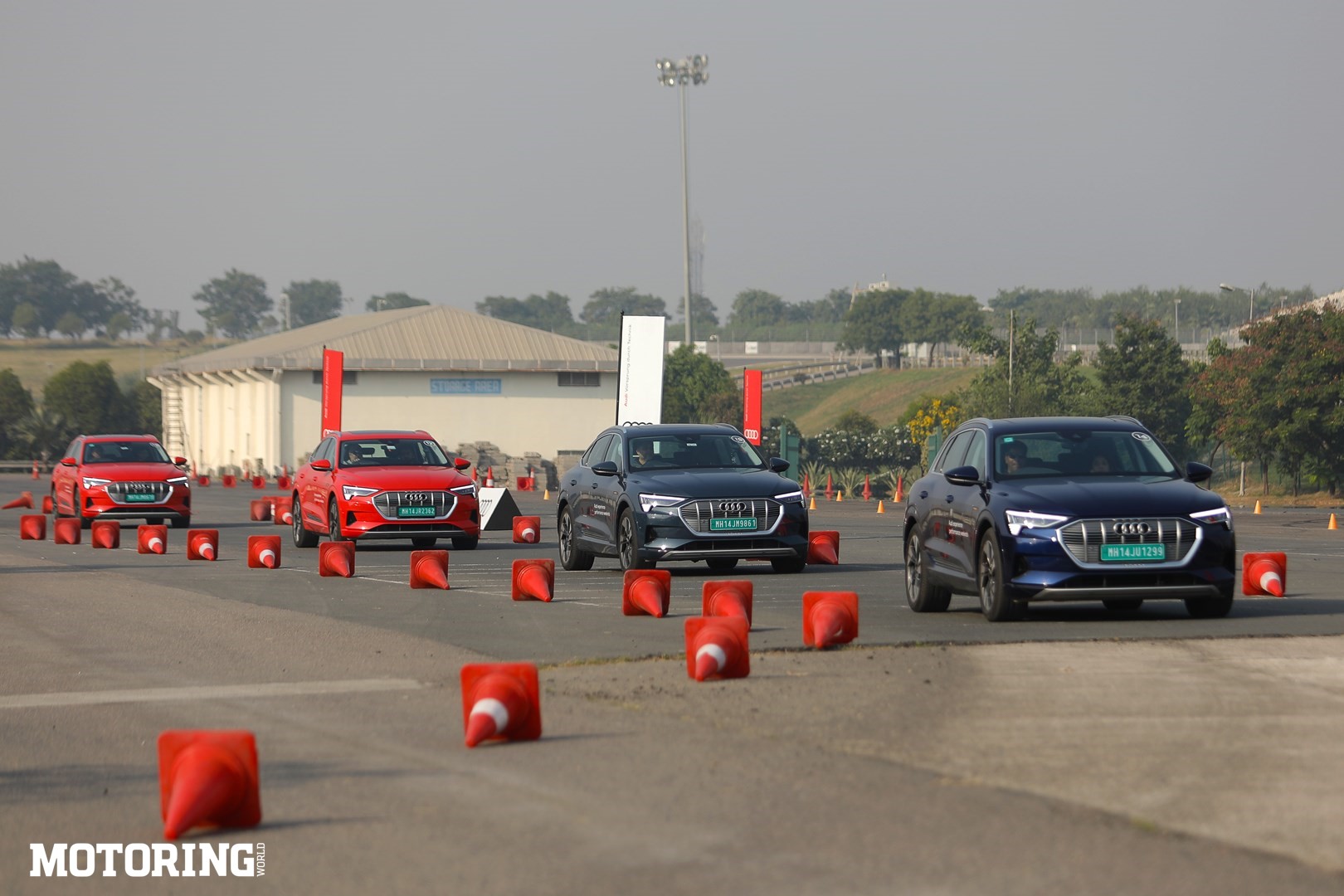 The weekend started as any normal weekend would — a busy Friday followed by an equally hectic Saturday. But what I was really looking forward to was Sunday. ‘Why?’ you may ask. Well, this excitement was brought about by the fact that I was to attend the Audi Performance Weekend at the Buddh International Circuit in Noida, and that should be enough justification.

Waking up to catch a flight in the wee hours of the morning is never a pretty task, but this time it was different. I was flying to Delhi to drive an Audi on one of the most stunning tracks in India, the Buddh International Circuit. Talk about the perks of being in this line of work, eh?

I felt like a little kid running through the hall on Christmas morning, in a tearing hurry to get to my presents under the tree. It is a wonder that I even managed to get any sleep the previous night.

Upon landing in Delhi, I was promptly picked up and chauffeured to the BIC by one of the most enthusiastic and talkative cab drivers I have ever met! Quite the character, I say, cracking jokes left, right, and centre, and ever so inquisitive about what I did for a living and what was the event that he was taking me to. I was equally enthusiastic in supplying the man with all the answers, and this proved to be quite the appetiser for what was to come.

As we entered the premises of the BIC, I felt a wave of awe overcome me. I was to drive on the same track that hosted the 2013 Indian Grand Prix, where Sebastian Vettel bagged his fourth World Title racing with Red Bull. Slightly bittersweet as that was the last Formula 1 race ever held in India to date, and also the fact that Vettel has now hung up his racing boots and retired from the sport.

But let’s get back to the matter at hand now, shall we? As I was saying (before being so rudely interrupted by myself), I was invited by Audi to partake in the Audi Experience at the Audi Performance Weekend, and boy, was I stoked. To the majority of the population, the name Audi would generally be associated with comfort, luxury, and, of course, the ever-reliable and innovative German engineering. What resonates most clearly would be the last point, bringing us to the sensational technology dubbed Quattro.

In layman’s terms, Quattro simply means four in Italian, an apt name for the legendary four-wheel drive technology used by Audi. Cars with Quattro can provide improved control by automatically transferring power from the vehicle’s front, centre, and rear differentials as needed. Here, optimal power is delivered to each wheel as needed to deliver superior handling and phenomenal grip. Quattro provides high levels of active safety and dependable traction on most roads, and of course, adds to the fun on a racetrack.

After completing the registration process, I was directed to the orientation programme where we were briefed on the vehicles we would be driving, the track layout, and the various guidelines to be followed during our time on the track. We were then split into two groups, with one group headed towards the slalom course in the Audi e-tron, and the other driving the Audi RS5 and RS Q8 around the track. I was placed in the former and so was headed to take on the slalom course first.

As I got into the e-tron and buckled myself in, it felt a tad strange. I was about to do a high-speed run through a tight winding course lined by marking cones, in an EV. The setting seemed somewhat familiar, but the feeling was totally new. We were all given a sighting lap to get a feel of the course, after which the clock started its countdown. Once I got the signal to go, I stepped with full force on the accelerator, with glee, and the e-tron shot off the starting line like it was possessed. 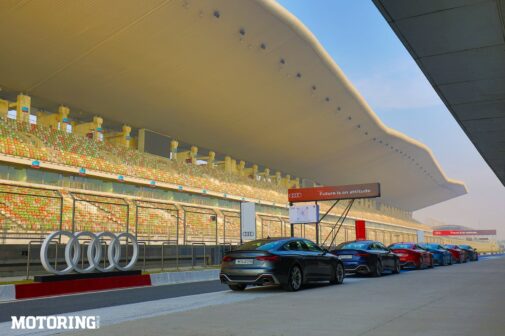 It handled beautifully through the turns and felt really well-balanced with minimal body roll. I could barely hear the whine of the electric motors driving the wheels, but they were doing their job. With an output of 308 bhp and a peak torque of 55 kgm, the e-tron is capable of doing a zero to 100-kph sprint in just 6.8 seconds. Before I noticed it, I was on my third run with a mad grin on my face and a lead foot on the pedal.

Once our group finished the slalom course, we were quickly ushered back to the main track like a bunch of starry-eyed toddlers who were promised new toys. We quickly donned our helmets and got into our assigned cars. I got into the shiny red RS5 that seemed to be calling out to me so seductively. Oh man, I knew that I was in for some trouble as soon as my derriere touched that seat. I hadn’t even turned the damn thing on yet, and I was already drooling.

I thumbed the start button, and it roared to life like a wild animal ready to pounce. I could almost feel the pistons pumping up and down in the six-cylinder engine. It is powered by a 2894cc turbocharged petrol engine pumping out 444 bhp of power, with a peak torque of 61.18 kgm. This engine is mated to an 8-speed automatic transmission that has been configured for peak performance. Again, we were given an initial sighting lap to get a feel of both, the track as well as the car.

The instructor was giving us real-time instructions via a walkie placed in the car, telling us where to speed up and slow down, and, most importantly, what not to do as he led by example at the head of the convoy. As the sighting lap came to an end, we got the go-ahead to start pushing the machines. Initially, I felt that my car was slightly sluggish, but then I realised that I hadn’t activated RS mode yet. As soon as I did that, it felt like the shackles had come undone, and I was back on par with the rest.

Into the first tight corner, I found myself braking hard by instinct, and then feeling the rear lose traction for a second before I got it back in control. Then I remembered what I had been told about the Quattro technology. I needed to trust the Quattro mechanism to kick in and let the car do its thing. As soon as I had that worked out, I could see a huge difference in the way the car moved around the track, almost too effortlessly. I managed to clock a decent 240 kph on the back straight, and two laps went by in a flash. The adrenaline rush that comes from pushing such a beautiful machine on the track is truly unmatched.

Next, I had a go at it in the RS Q8, and this time there was no warm-up lap. It was pedal to the metal from the get-go, and words cannot begin to express how refined this machine felt. One would think that being an SUV, it would be a bit sluggish and not as sprightly as the leaner RS5, but it is surprisingly capable of so much more. The RSQ8 features a 4-litre eight-cylinder twin-turbocharged petrol engine. This engine generates 591 bhp of power with 81.5 kgm of peak torque. It felt planted on the corners and had very little body roll, allowing me to push it even more as I tried to test its limits (or rather, my limits). One wouldn’t be able to make out from the inside due to how well-insulated it is, but the exhaust note is very gruff and warbly, and I think I may prefer it over the RS5, too! 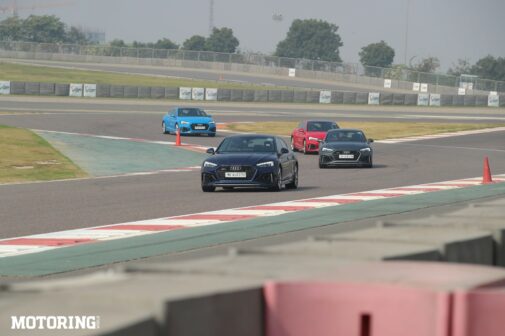 The session ended almost too soon, but that only goes to show that time does fly when one is having fun. I have to give due credit to the folks at Audi for making such wonderful track machines, and for the brilliant technology and engineering that goes into each one of its cars. I have learned a lot from this short session, and the takeaways are so valuable that I wouldn’t have wanted to spend my Sunday any other way.