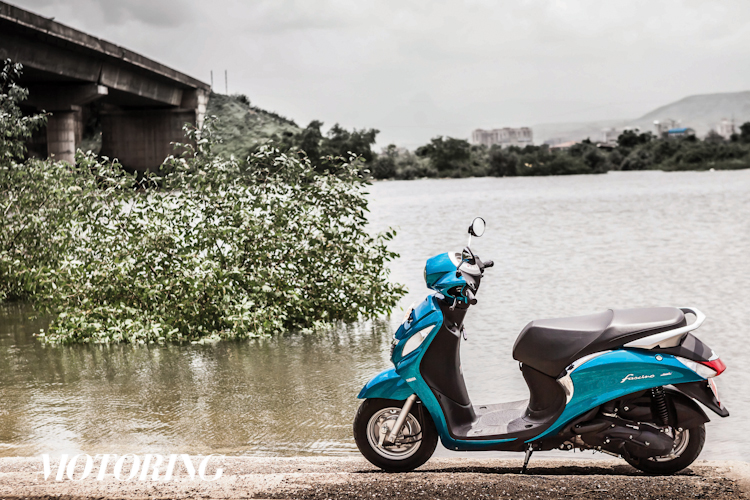 Prada, Gucci, Louis Vuitton, Fascino, Dolce & Gabbana… wait a minute! Let’s dial that back a bit. Fascino isn’t a premium fashion brand — it’s a scooter. Well, you’d think this scooter was a fashion accessory, too, what with the Yamaha television advertisement emphatically driving that misconception home. With ‘Fascinooo’ still echoing in my ears from that advert, my brain swirls with images of beard-sporting hipsters clad in business suits and retro half-face helmets, cruising around in urbania on this stylish little commuter.
Yamaha seems to have gotten something very right with the styling of the Fascino. At first glance, it does resemble the Piaggio Vespa to some extent. However, its design cues have been adopted from the Fascino’s European counterpart, the Yamaha D’elight. The combination of a retro-styled headlight, sweeping retro-modern curves and little splashes of chrome make for a very appealing package. Its contemporary design is actually quite pleasantly refreshing in comparison to the other scooters we have available in the Indian market. This is a look that is quite easily distinguishable and should take little time to become recognisable… once people stop mistaking it for a Vespa, that is.

Yamaha has also added a dash of chrome to the front radiator grille (is that what it’s called on a scooter?) that complements the leaf-shaped chrome mirrors. I did try to imitate the television ad for the Fascino and compare my fingernail to the headlight, but I soon found that I’d need an army of manicurists to pull that one off. The sweeping curves of the side panels lead up to a very flowing and almost horizontal tail-light that also sports a dash of chrome. But don’t get any crazy ideas just yet; no matter how aerodynamic that tail-light looks, you definitely won’t be doing any earth-shattering speeds.
The Fascino’s seat is pretty low in comparison to the other Indian scooters. Then there is the quirky-looking, very minimalistic speedometer that sits flush in the contour of the retro- styled headlight. The riding position will also make the riding experience much easier for shorter riders. Hear that, ladies and midgets? Yamaha has kept the speedometer and fuel gauge completely analogue with just two indicator lights for high beam and indicators. The buttons on the console look and feel very functional but lack that premium feel.

The seating position is pretty upright and will allow for easy manoeuvring through congested city roads. And the lack of a front storage compartment allows for more legroom which will have ample space for taller riders. The Fascino does have a cubby hole just on the right of the ignition switch that could house small bottles, keys or whatever little trinkets a hipster might like to transport. Under-seat storage is a blessing for everyday city commutes or that weekly grocery run and the Fascino has about 21 litres of it. It is comparatively  larger than the 18 litres on the Honda Activa but sadly, falls short of holding a full-face helmet.

Once astride the Fascino, the ride feels very plush thanks to the telescopic front fork and the single rear shock absorber mounted on the left. You can cruise through those rogue potholes that litter the streets without the fear of being cast forward like a flying squirrel. The ride also feels very planted and manoeuvrable at lower speeds, but cross the 70-kph mark and it starts to get a bit unsettled. Yamaha has provided the Fascino with drum brakes at both ends, but neither offers enough bite, as expected. At 103 kg, the Fascino is the lightest of the Yamaha scooter bunch, but with just 128 mm of ground clearance, it’s going to scrape some tarmac off some of the rudimentary speed breakers our gracious (not) road makers have provided us with.
Yamaha’s 113cc air-cooled, four-stroke, single-cylinder engine puts down a reasonable 7 bhp of maximum power and 0.82 kgm of peak torque, but the Fascino does lack that bit of initial grunt. But once you crank that throttle open, power delivery is very steady and linear. A strong mid-range will get you a consistent climb from the speedo needle between 40-80 kph and from then on it takes its time to get to 90 kph. However, Yamaha claims a mileage of 66 kpl, which might explain this slightly sluggish performance. This efficiency is also down to the Fascino’s light weight, which also helps it to be nimble around town. Good looking, light and fleet-footed — that pretty much sums up the Fascino.

Being priced at Rs 56,800  (ex-showroom, Mumbai), the Fascino does feel a bit overpriced when compared to the competition. But then again, the engine’s refinement and very elegant design elements must count  for something. It may not produce the same kind of power as the 125cc Vespa, but it certainly gives the  Piaggio a run for its money in the eye-candy department. And wouldn’t the hipster in you just love all that haute couture attention you’d be grabbing along the way?