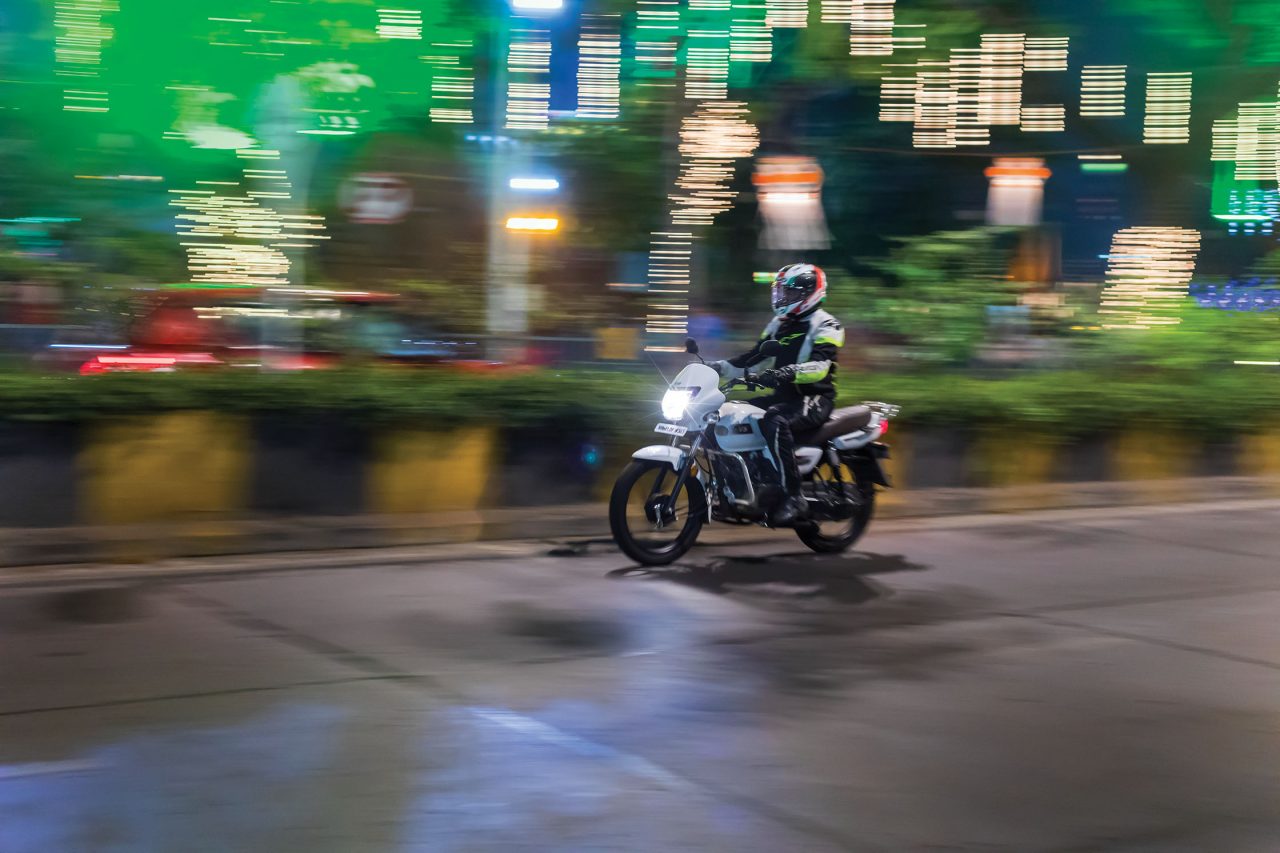 Making motorcycles is a tough business, and making good motorcycles even more so. After achieving one, the general idea is to tweak it for more improvement and have a parallel model add a bit of spice to the mix. This is only to prevent cannibalisation between the two. But then, there’s TVS, who felt there’s more scope to expand further in the 110cc segment inspite of already having the Star City+ and the Victor. The bike-maker says there’s still a pocket, especially in the semi-urban and rural market that’s yet to be addressed. And TVS seems to be well aware of this sector and the ingredients that are needed for a good product. Which is where the TVS’s new Radeon comes in. 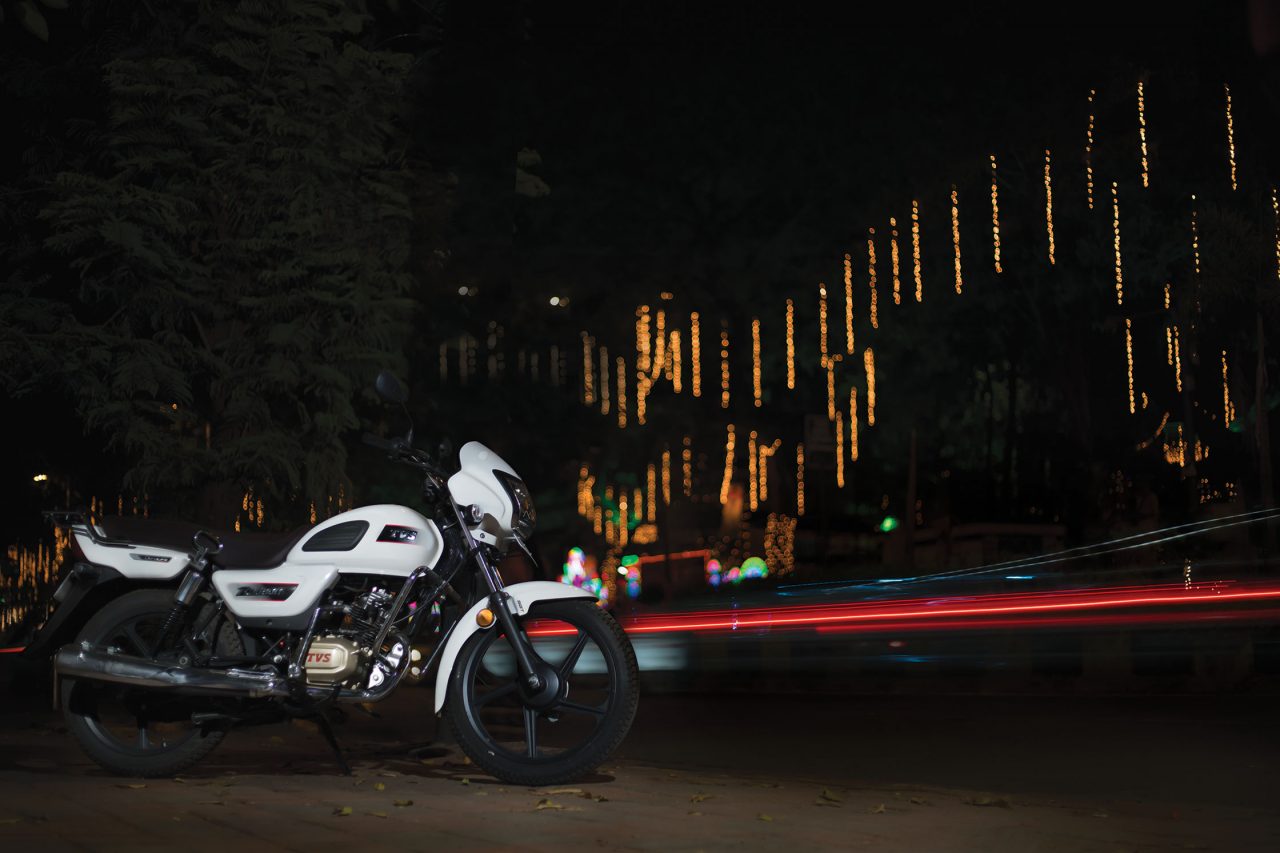 The TVS Radeon is a well-proportioned motorcycle, with the relatively generic looks (did someone say Splendor?) that kind of define this segment. Nevertheless, this one has a highlight of its own — chrome, and lots of it. I think, for the segment it’s targeted at, the amount of chrome is directly proportional to the desirability factor of a motorcycle. Apart from the front mudguard, almost every other body panel has received the bling treatment. Oh, and there’s also the bright chromed exhaust and crash guard. 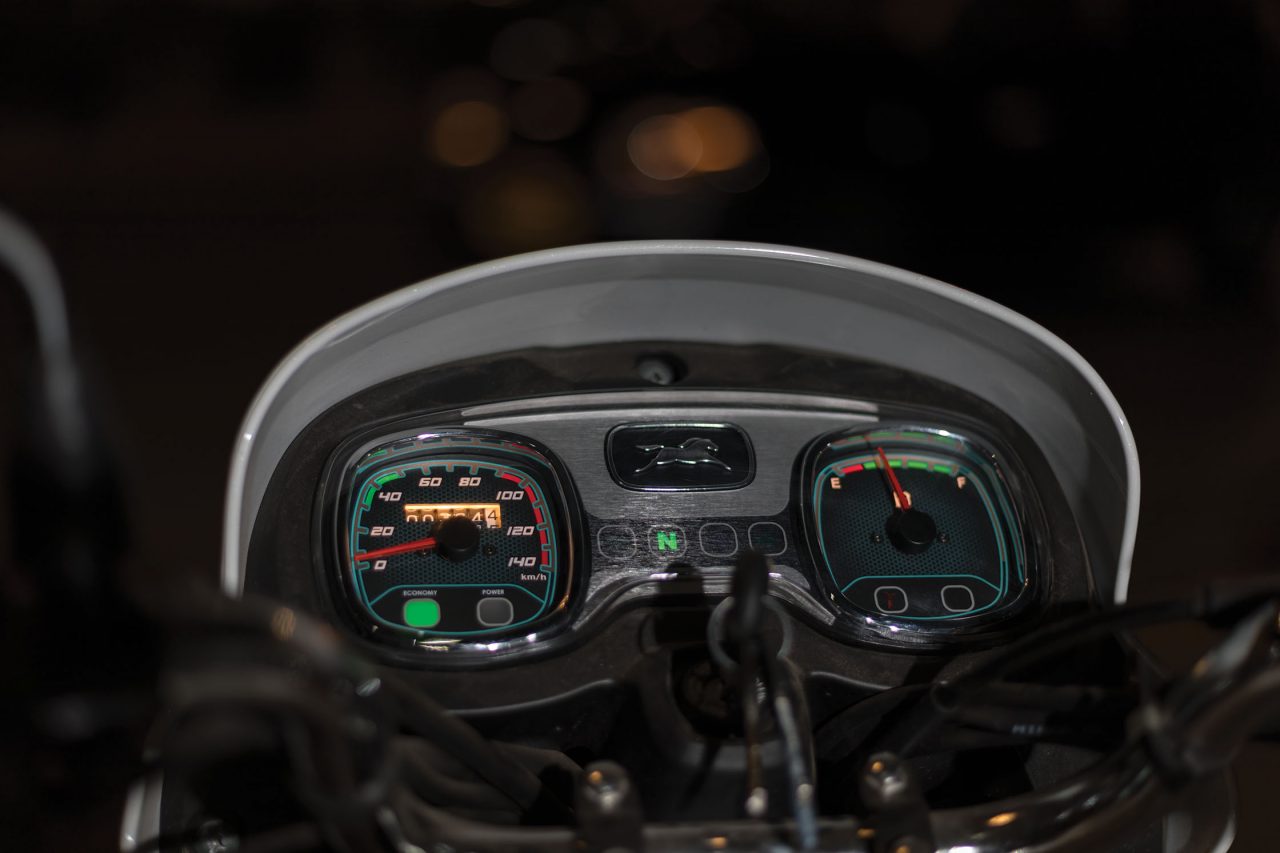 Now the Radeon’s appearance isn’t exactly going to set your heart racing, but it should be just apt for its intended audience. But then, there are some aspects that are actually quite good. The paint quality and finish is pretty much unheard of in this segment. And then, there’s the tan brown seat that gives the motorcycle a classy yet stylish look; a tad better than the boring black ones, don’t you think? Even the instrument pods are large and easy to read with a car-like design. There’s also the USB charging port and side-stand indicator which are pretty neat features to have on a 110cc bike. 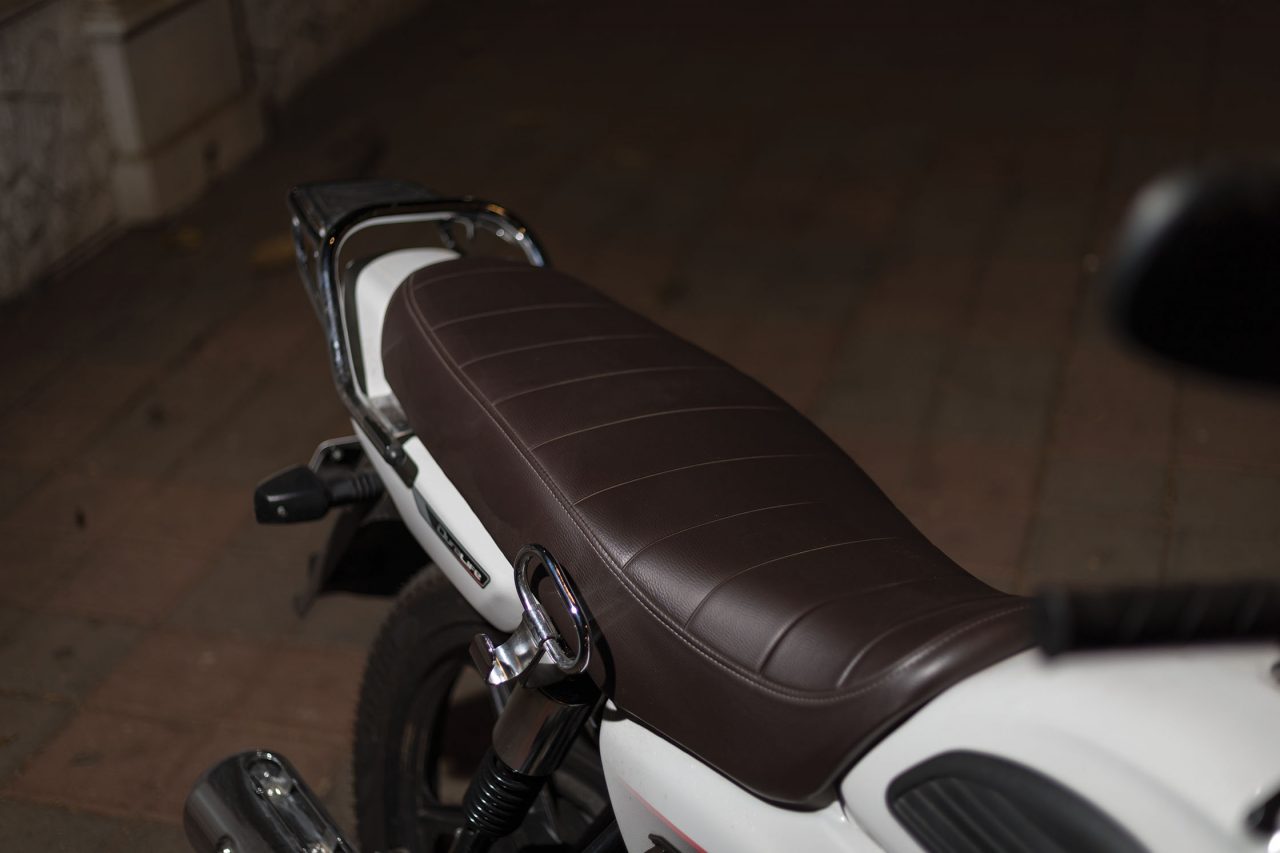 In addition to that, everything on the Radeon looks and seems to be built with a higher preference for functionality over design. Speaking of build, the quality levels are typically TVS; robust and tough with good fitment of the panels and cycle parts, giving it a very solid feel. The overall features and the quality of materials used makes for a decently good impression. But it’s the way the Radeon rides that’s simply remarkable. 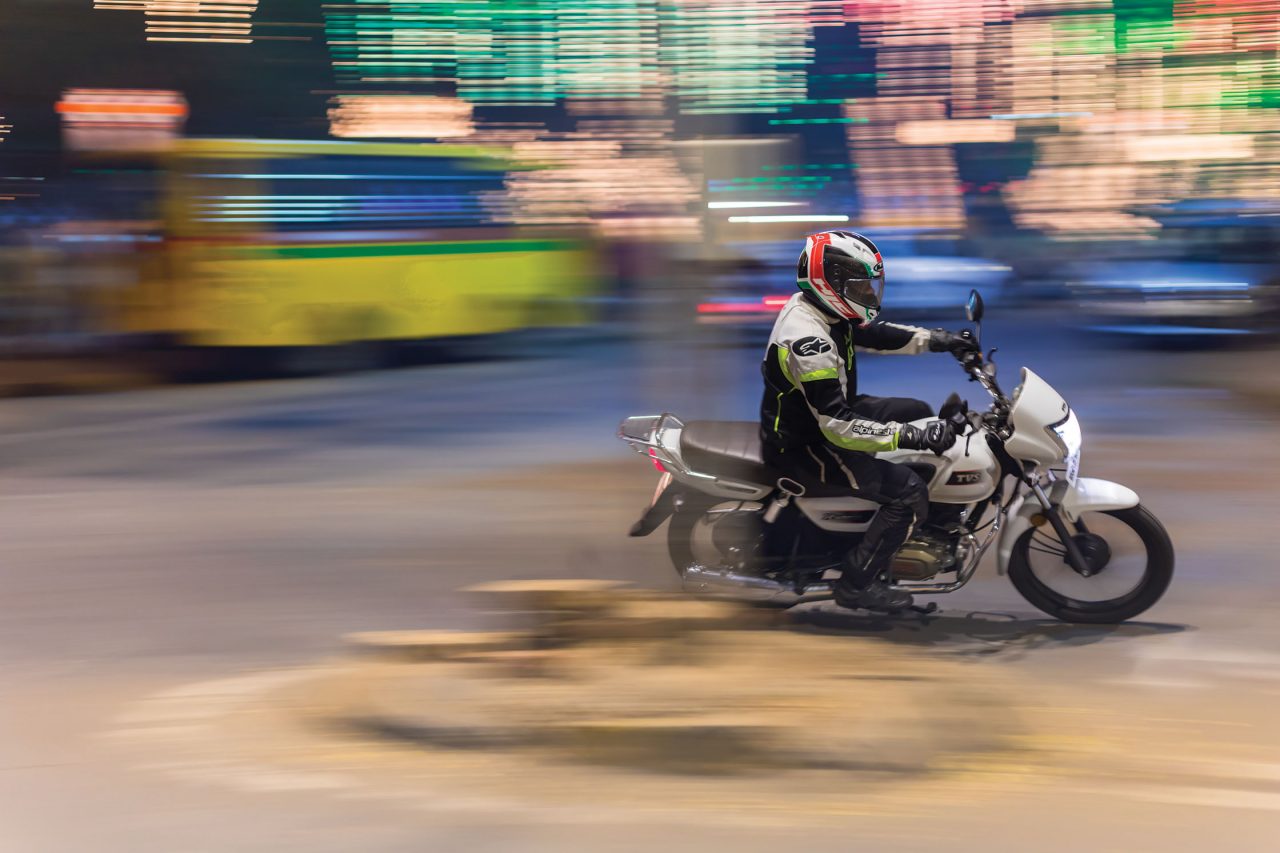 I don’t remember the last time I was so happy after riding a commuter bike. Like seriously, this thing does exactly the opposite of what you expected, which you’ll notice soon after you get rolling. The body triangle is strictly commuter based, but it still feels ready for some action. The suspension setup is not the typical soft type which gives absolutely no idea of what both the wheels are doing. It’s rather set more on the stiffer side which transforms the way the Radeon handles. Unless it’s absolutely bad roads, the setup irons out the bumps and potholes comfortably. 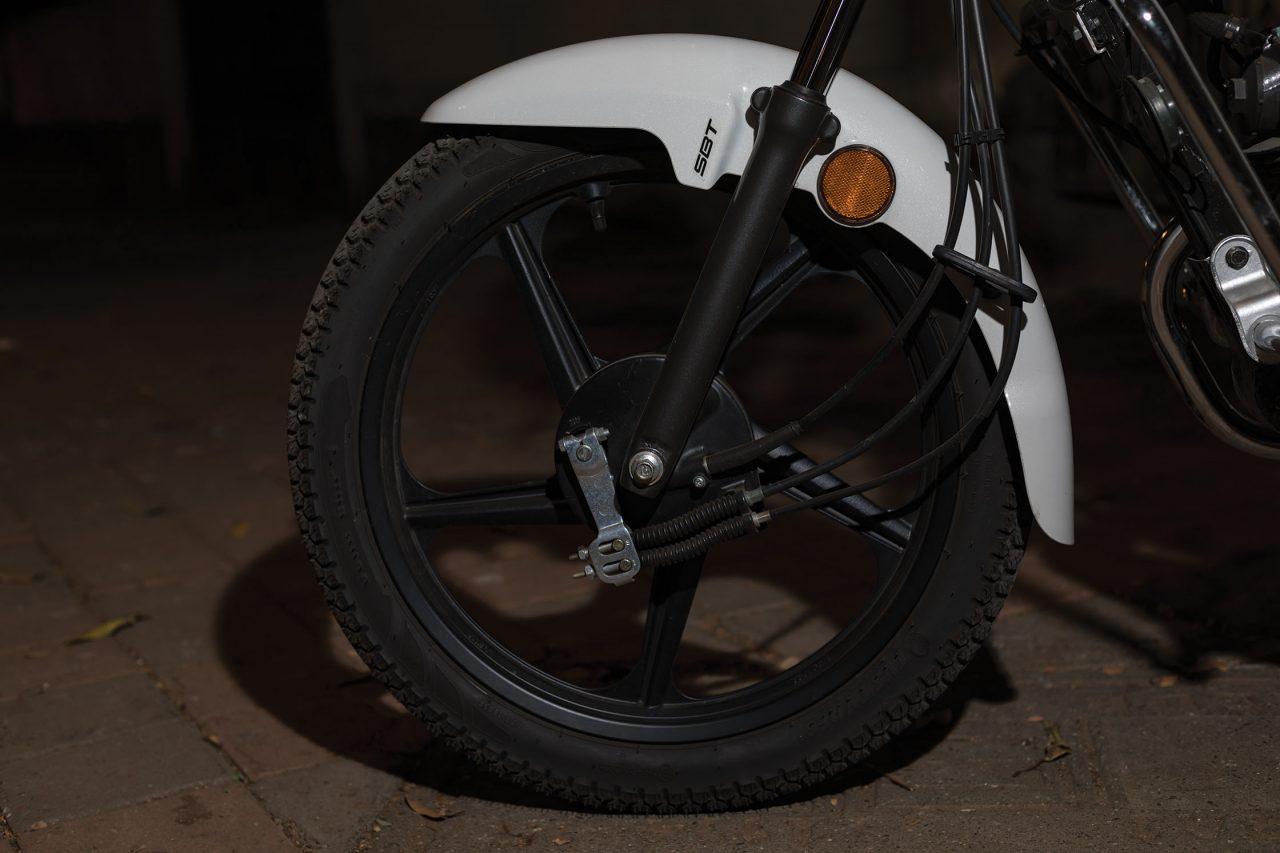 The Radeon comes shod with some seriously good rubber. The compound of the TVS Dura Grip tyres is soft and grippy, which ensures there is traction on different road surfaces. With a well-planted composure, the Radeon is properly light and flickable. You can make this motorcycle do just about anything you wish to and it’ll never snap back at you.

Now for a bike that inspires so much confidence, you’re bound to whack open the throttle every time an opportunity greets you. And then comes an occasion when you need to drop the anchors hard. Well, at times like these, although a disc at the front is in dire need, the drum brakes are not bad at all. The all-drum setup is surprisingly decent as it offers a nice bite and has good progression. 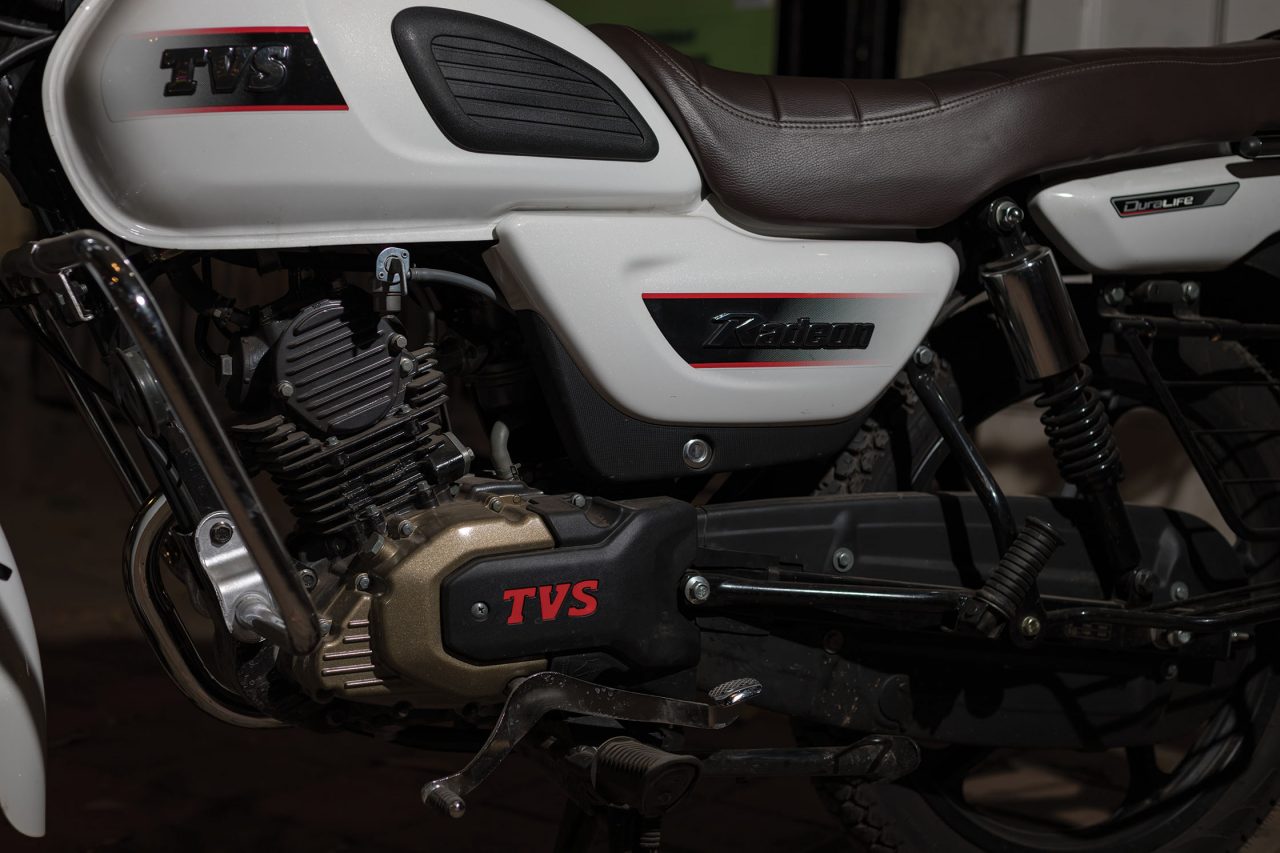 Now the whole point for any 110cc motorcycle doing well in the market is economy. Get this number right and your product can expect a good future ahead. TVS claims the Radeon will return about 70 kpl, which I believe is pretty realistic. The fuel gauge refused to budge even after putting down many kilometres on the odo. But what I really liked about this motor is the way it performs. Inspite of putting out a meagre 8.2 bhp and 0.88 kgm, the power delivery is prompt and available across the rev band. The gear ratios of the 4-speed box are just about right for brisk pickup and cruising in the 60-70 kph range. Yes, you can push the motor all the way up to 90 kph, but that’s not what this bike is meant for. The only chink in the armour in terms of this motor is cold starting. It tends to feel bogged down for some time, but that’s only until it’s at proper running temperature.

In conclusion, the Radeon is really a good product from TVS that offers a lot more than just a bunch of features. It’s a well-built motorcycle that’s apt for the target market and at the same time fun to ride too. It might not be able to obliterate the segment king (Hero Splendor) to smithereens, but it’s surely capable of giving it a run for its money. For a manufacturer that’s known for quality and involvement in racing, the Radeon is a proper example of things to come.