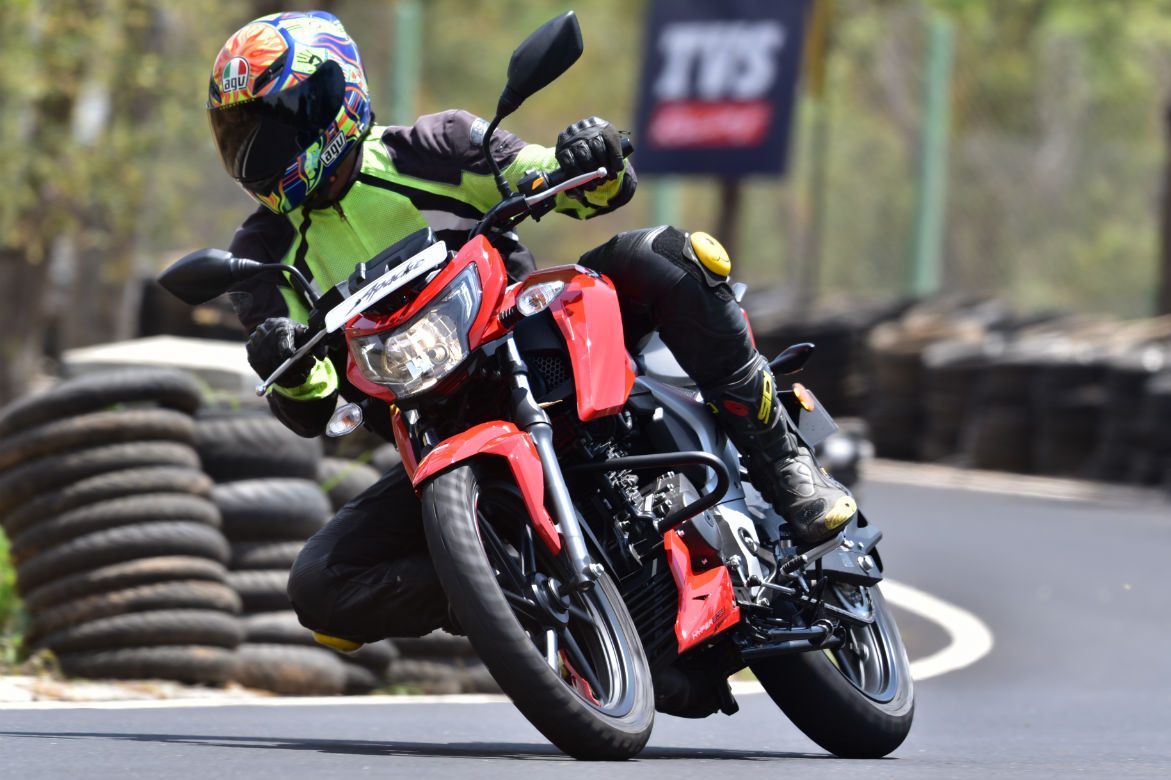 Growing up is not fun. As I settled down some distance away from the stage, a sudden memory took over my mind, even before I saw the new TVS Apache RTR 160 4V ride onto the stage. It was a memory of my first Apache long-termer, a yellow RTR 160, a bike that was everything you could expect from a performance-oriented motorcycle in its class, but with a flavour all of its own. It was compact and feisty, and endeared itself to whoever rode it. That, for me, is what the Apache was all about. And then the new bike appeared on the stage. And I wondered what that means for the smallest of Apaches.

TVS has been on a roll of late, with the flagship Apache RR 310, the NTorq 125 scooter, and it’s continuing that roll by launching a completely revamped version of its popular smaller Apache. And that was my worry – that what I knew to be a lovely bike would now lose its special character and be a grown-up version of its former self. And, as I mentioned earlier and as everyone knows, growing up is not fun. 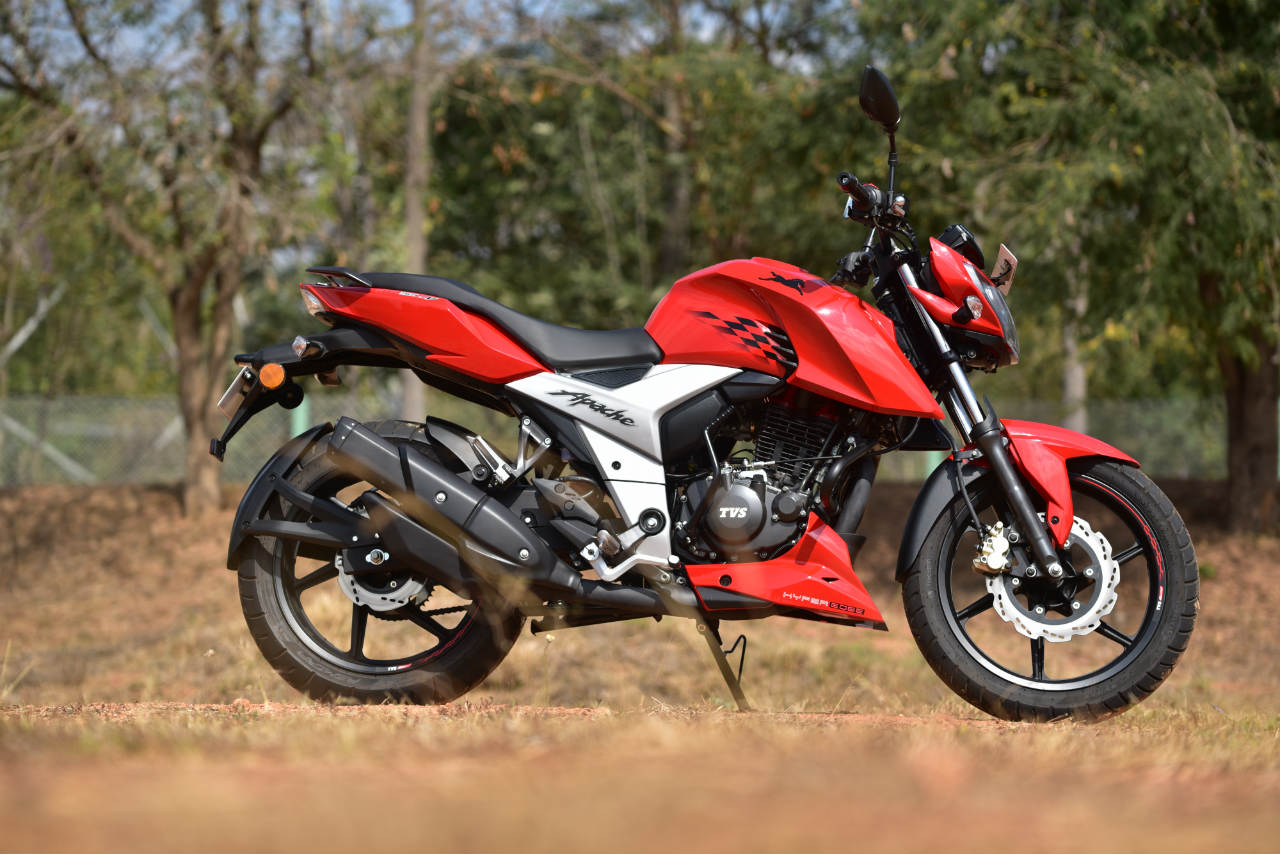 In this case, at least visually, the RTR 160 has grown up to look like its elder sibling, the RTR 200. The single-unit seat is the first difference you can spot, though a few smaller details change, too. As far as looks go, then, I’m a bit unstirred; after all, I’ve had good time to get used to the way the RTR 200 looks. Still, it’s good news for those who buy the RTR 160. They get more or less the same aesthetics as a more expensive motorcycle. Even the TVS Remora tyres look the part. That’s offering more for less, and I can’t fault that line of thought.

Still, at the TVS test track in Hosur, the gang of red Apaches did make for a pleasing sight. And in the time I had before riding began, I went over the bike as much as I could and came to the conclusion I was expecting – other than the fact that it looks sweet and sporty, it is also an very well-finished motorcycle. By now, we’ve thrashed enough TVS motorcycles to know for sure that they hold up well, and this new Apache does not seem to be an exception. Instead, it seems to be an improvement over the older Apache 160, which is saying quite something, especially in this segment. I hope it keeps going that way. There is a carb/rear-drum version of the new Apache that comes with a 110-section rear tyre, but since I didn’t ride that one, I’ll focus on the two I rode – the carb/rear-disc one and the FI/rear-disc one. 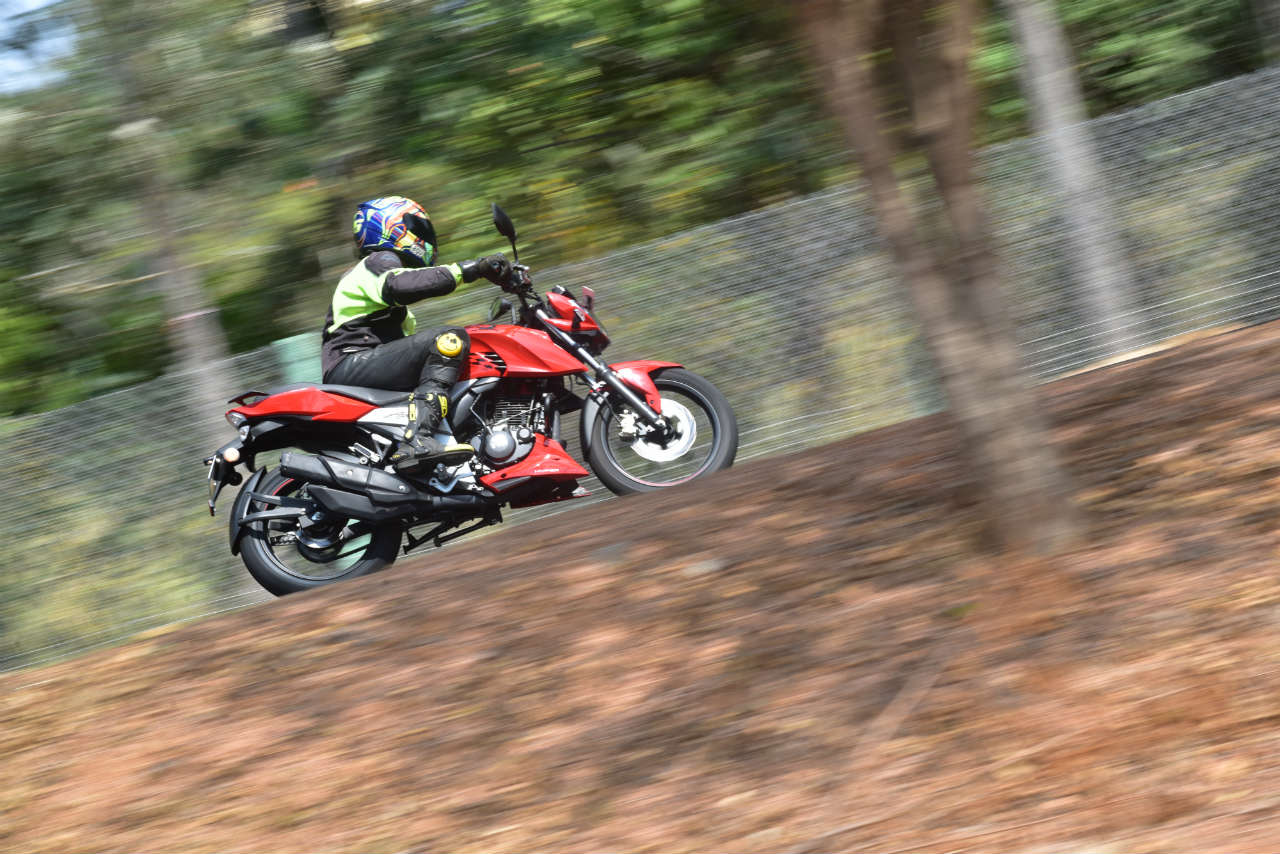 It’s most likely down to the fact that despite the almost-negligible gain in power, the FI version is 2 kg heavier. And if that is indeed true, and I’m certain it is, the lowest spec with the 110-section tyre should be the quickest of them all. So if all you’re looking for is outright performance, you should check out the cheapest Apache of them all first. However, I doubt you’d gain much – the new Apache 160 is one hell of a bike, whichever version you end up with. 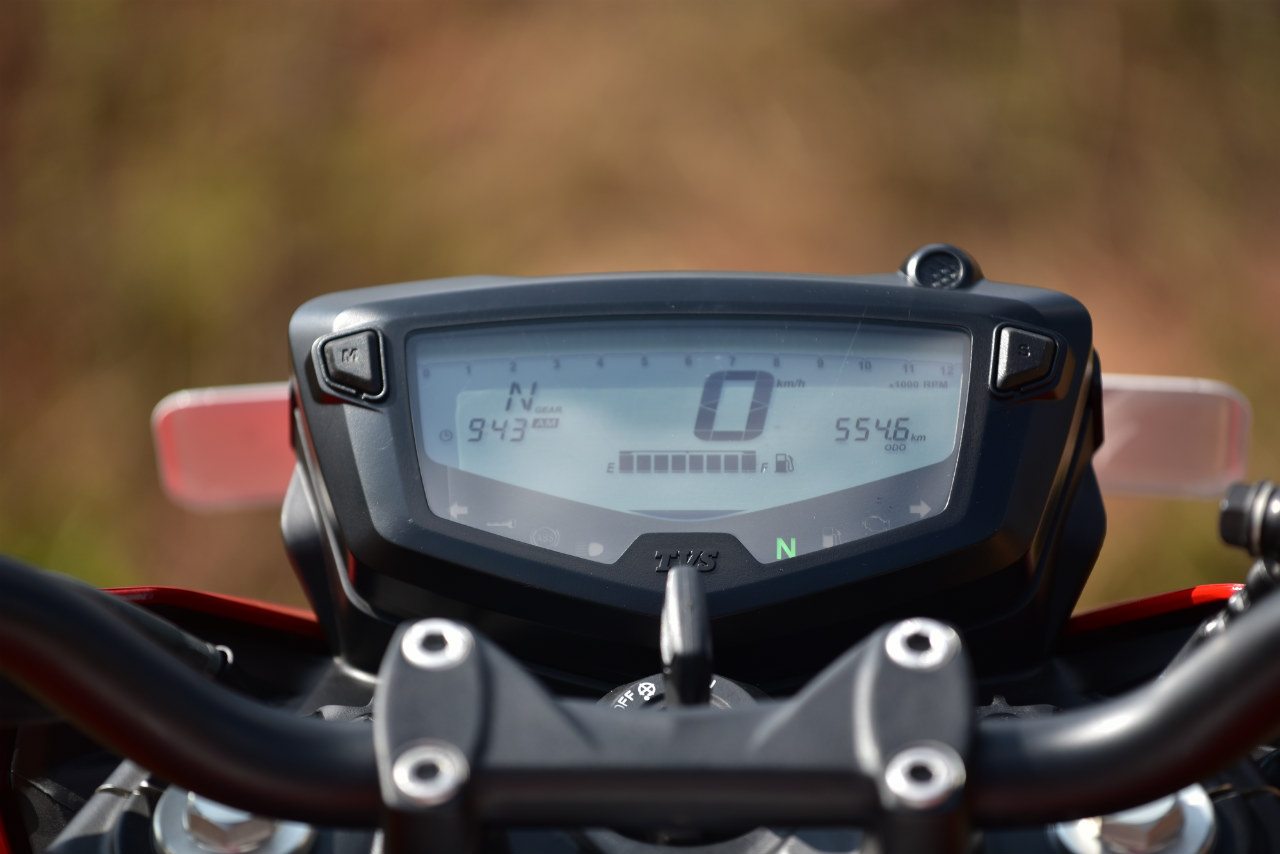 The motor now lives with new internals, not least of which is the four-valve setup. It feels smooth and ready to go all the time; I can’t wait to ride it in the city and see what it feels like. Even on the test track, with the throttle whacked wide open for most of the time, the Apache felt at home. There’s no lag or hesitation – just an eager and linear run all the way to the redline in each gear. I saw an indicated 119 kph on the FI version in fourth gear right before running into the rev limiter.

Since there was nothing but a giant arrestor pit full of stones to stop me at the end of the straight, I wasn’t about to snag top gear to check how much more it’d do. But a rider 30 kg lighter than me managed to hit 126 kph. Those aren’t bad numbers to see every day, right? What’s more, both versions also managed to roll along quite comfortably between 25-30 kph in top gear which hints at great real-world rideability, too. It’s a flexible and fun motor, this one. Though the watchful eyes of the TVS staff prevented me from checking out its one-wheeled capabilities. 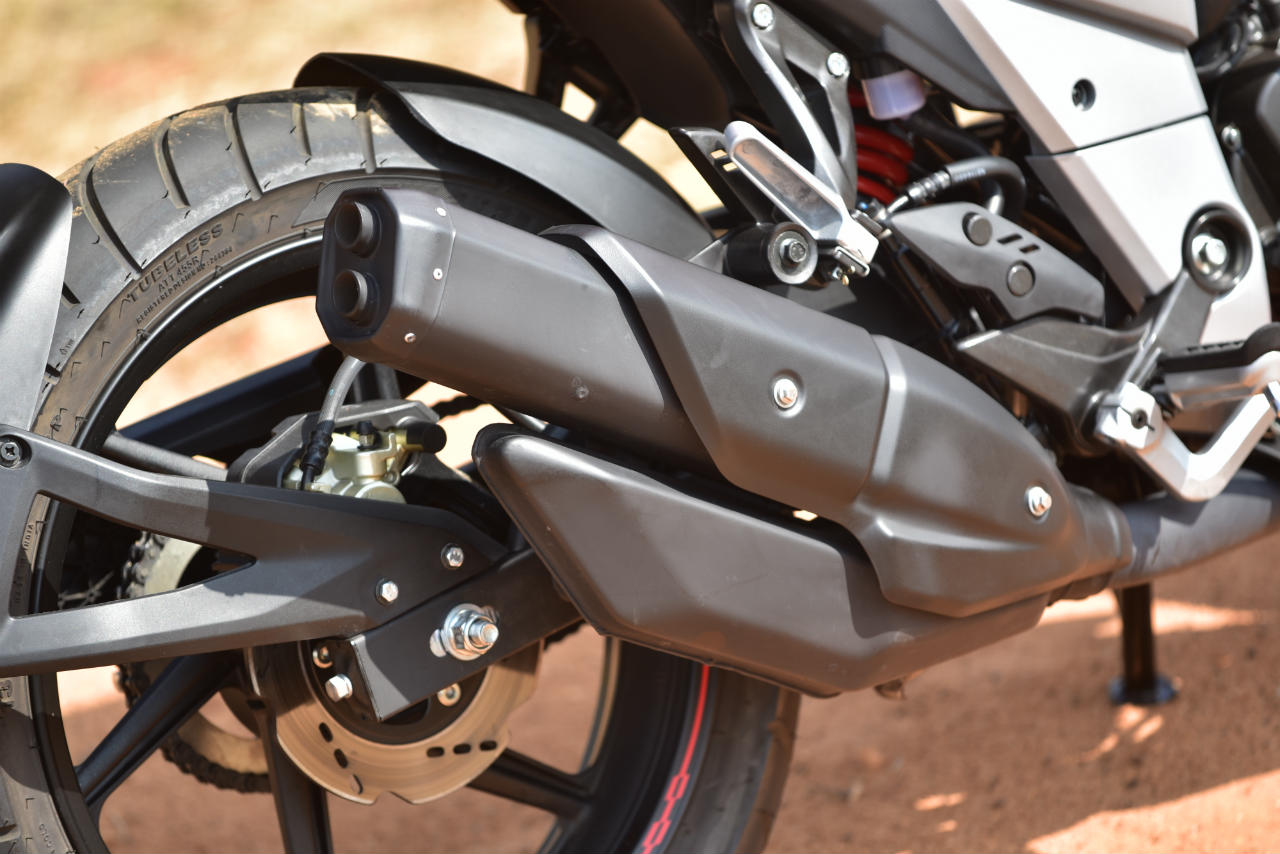 As for the difference between the carb and FI versions, the first thing you notice is the sound. The FI sounds throatier and feels snappier at the throttle, and… well, that’s about it. Oh, and it also feels a bit more urgent at the top end and it consistently showed up higher numbers on the same stretch than the carb version did, though the latter definitely felt smoother. I suppose the difference between the carb and the FI version can be likened to me right now and me if I went to the gym and ate healthy for a couple of months. Not a whole lot different in essence, but certainly felt better. Also, the FI gets a gear indicator and a lap timer which I never will, no matter how much I go to the gym.

Now, the motor is a great thing to get you going, but what really catches you by surprise is the handling. More specifically, the turn-in — man, this thing can attack corners! It is really something, the way the Apache 160 enters corners, as if its fuel tank holds pure confidence, not petrol. Somehow, it retains the lightning quick reflexes of the old Apache 160, but without the unpredictable twitchiness. You can bomb into corners on the brakes, off the brakes, whatever — it just wants to dive straight into them. 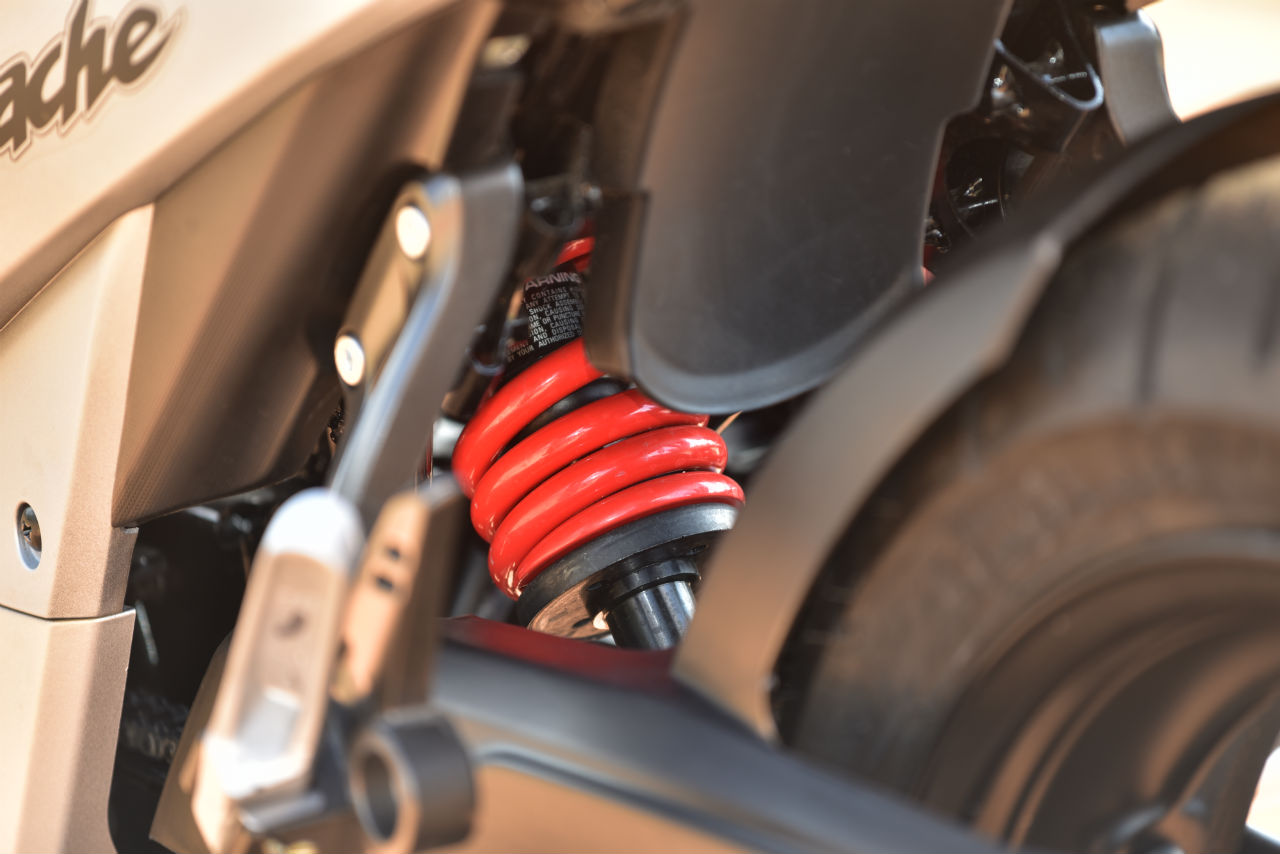 Mid-corner behaviour is settled, too. Initially, heavier riders (that includes me, too) found it bouncing around a bit, but setting the rear preload to one step below maximum made it better. The suspension seems to be a good compromise between ride and handling, so a bit of movement in the middle of a corner is not a deal breaker. Especially when every corner exit had me realising that I could’ve entered the bend faster.

The TVS Remora tyres are pretty good on the track’s excellent and slightly bumpy surface, but I’ll wait to ride them on the road to see how they hold up in the unpredictable real world. Each time in the corner, I couldn’t help but feel that they were holding the rest of the bike back. Or perhaps the Pirelli Diablo Rosso IIs I’m used to have completely spoiled me.

The brakes on the new Apache are strong, too, though several riders thought they fade too soon. I didn’t really notice any such thing, but perhaps I wasn’t going as fast as they were or braking hard as they were to cause the problem. In any case, I don’t expect it to be a problem on the road where we’re not braking from top speed every minute or so for 30 minutes. 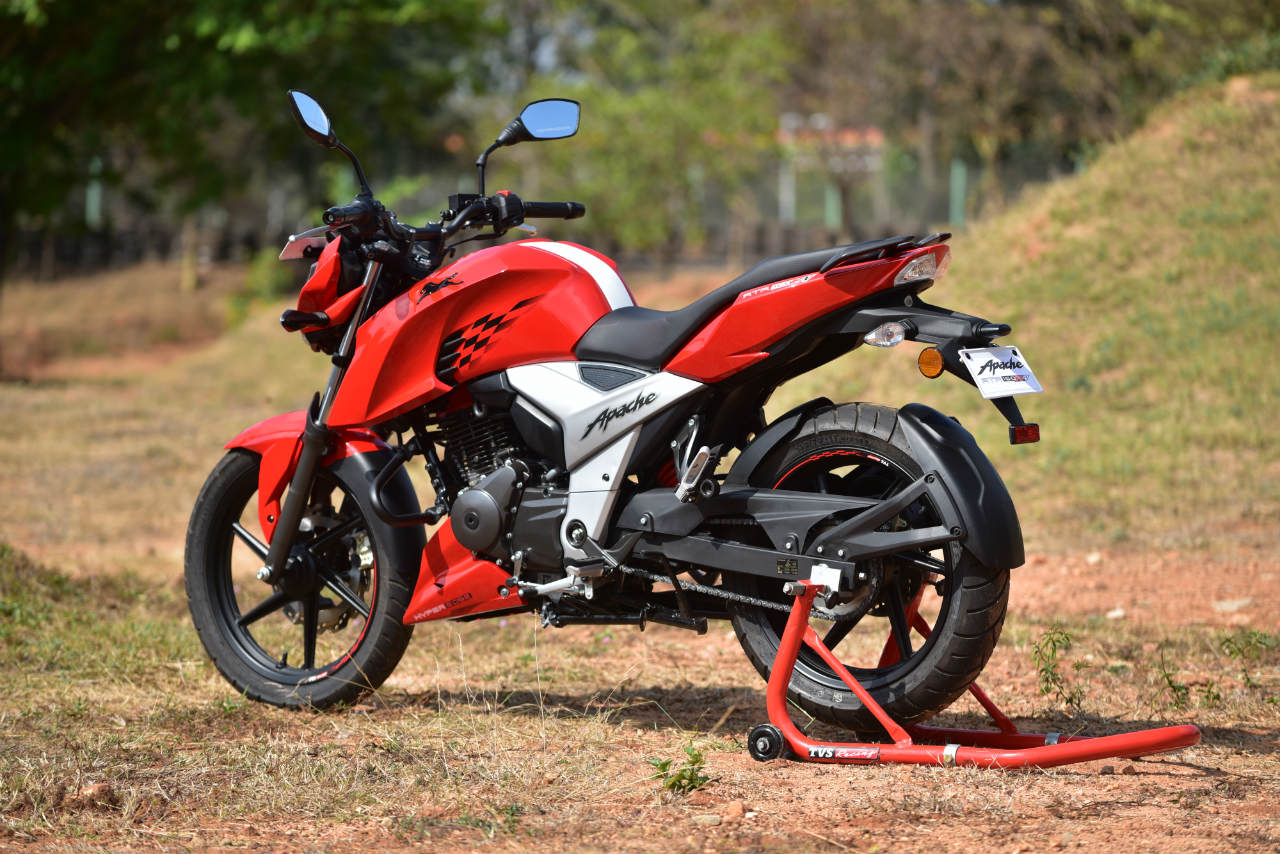 The first run on the carb version was enough to convince me that the Apache RTR 160 4V is a fantastic motorcycle that will impress whoever rides it. And the FI version is an interesting addition in terms of character to its lineup. Would I buy one? I’d wait for the real-world ride first, but going by the fast-and-furious first impression, if I was looking for a sporty all-rounder in this price range, most certainly. Growing up may not be fun, but the new Apache is a happy exception to that rule.