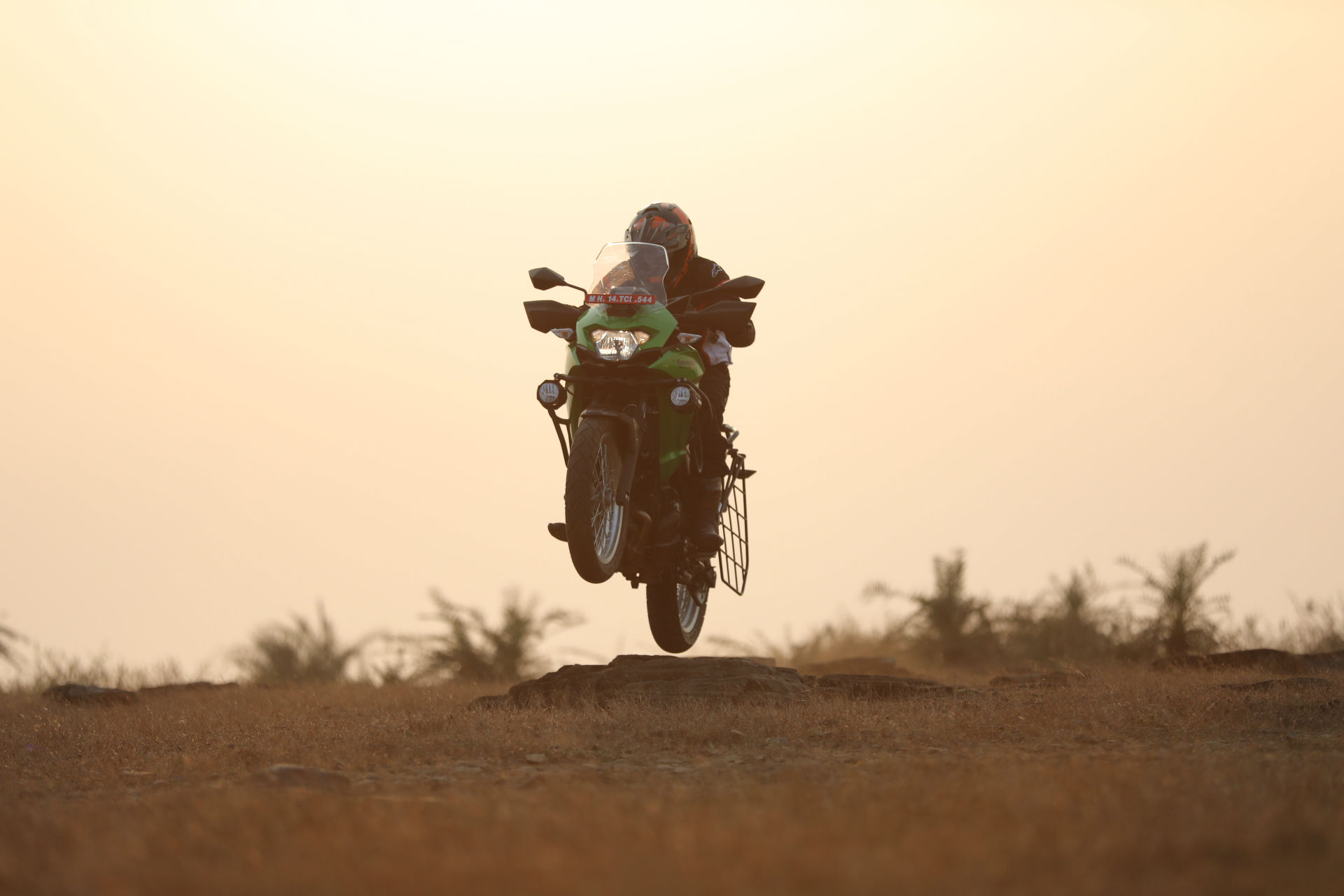 More often than not, general Indian sensibility has a tendency to bypass all forms of practicality in the never-ending pursuit of pride. Could the Versys-X 300 be the motorcycle for the thinking motorcyclist? Could the it hit the practicality sweet-spot enough to really open up this segment?

Like it or not, the Versys-X 300 has got a certain charm to it when you first get an actual physical glimpse of it. The aggressive Jap styling cues come together in a vivid symphony of fluidically placed points, curves and edges. In its signature Kawasaki-green garb, the Versys-X 300’s overall shape and contour is accentuated even more as the light hits it. With the absence of a protruding front-beak and a normal, wheel-adjacent front-fender, it isn’t trying too hard to prove its adventure credentials. 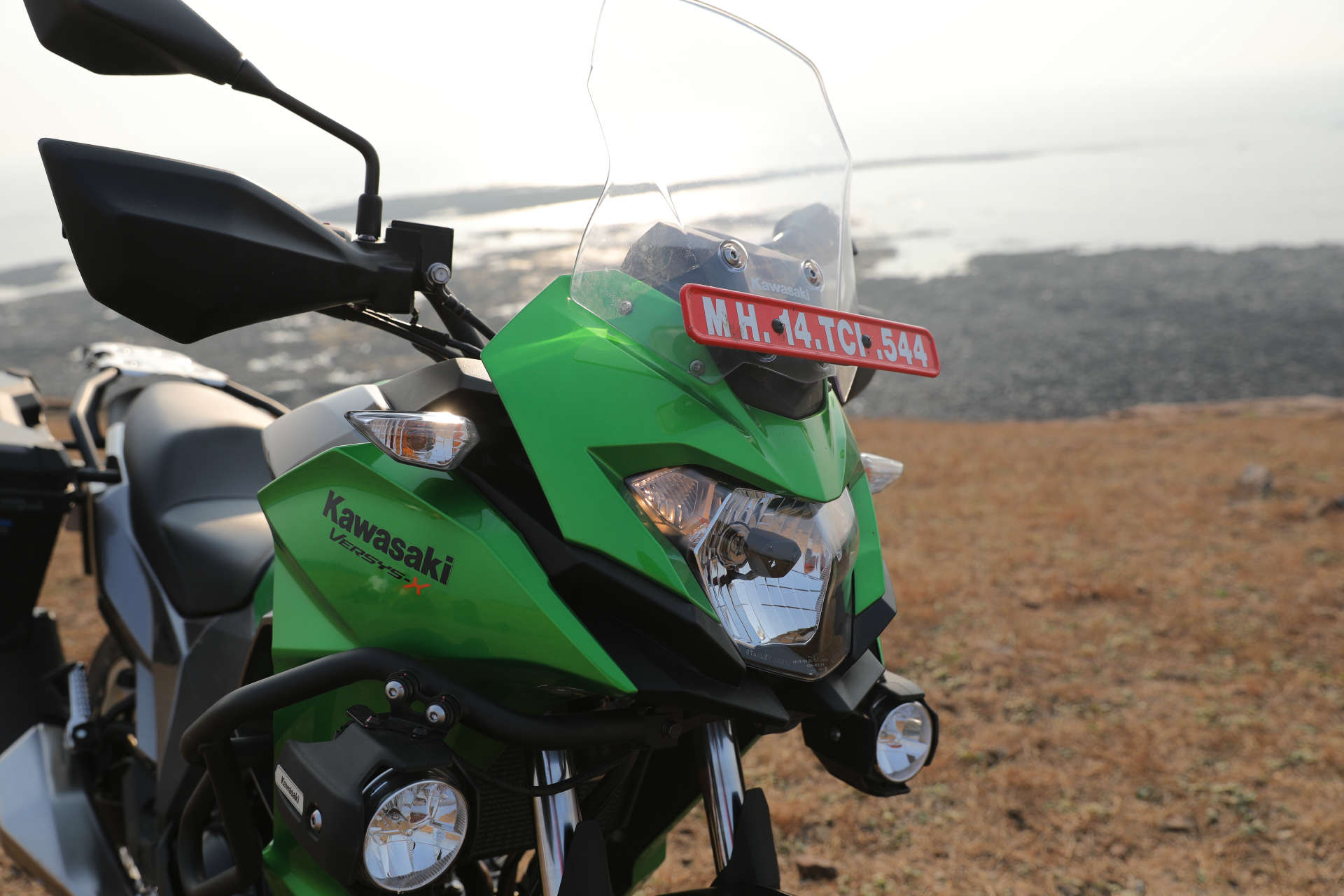 The upper edges of the headlight give this fledgling an almost raptor-like façade; with the air-intakes lurking just beneath it that give it a nice, muscular jawline. And in a bid to keep those aggressive lines flowing, the front-fairing adorns a large, wide, and very shapely form. The large vents in the fairing are placed in a manner that dissipates engine-heat away from the rider. 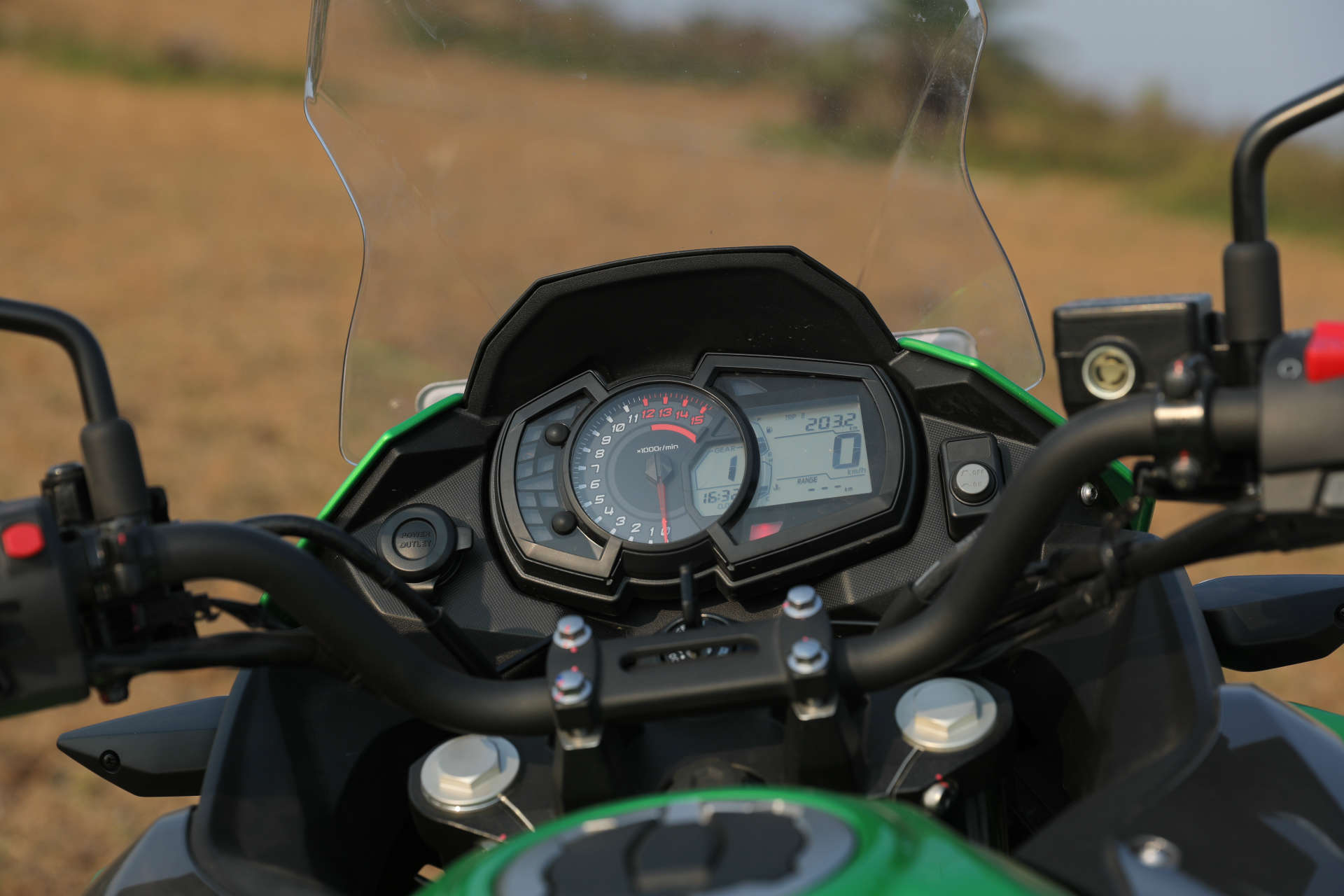 The tall front windscreen does a reasonable job of fending away wind-blast from the torso-area and reducing high-speed wind-blast.The speedometer that sits behind it is fairly simple, purposeful and easy to read. It’s got the warning lights stacked on the left, with a centralised analogue tachometer that reads all the way to an inline-four territory 15,000rpm. That being said, the engine-limiter comes knocking at a slightly more sane 12,800rpm. There’s an in-laid digital section within the tacho that has a gear-indicator and a clock. Peripheral information like fuel-levels, engine-heat, fuel consumption, range, an odometer and trip-meters are displayed on the digital section on the right, with a large, digital read-out for speed.

The large 17-litre tank flows into a simplistic single-piece seat that sits at a reasonable 815mm height. This saddle feels generally quite un-intimidating for an adventure tourer. And a vertical perspective will reveal a very narrow mid-section of the bike – this helps keep the in-seam to very manageable levels. It has however resulted in a seat that feels relatively stiff around the edges and really isn’t the most comfortable when muching-up those long highway miles. On the flip side, the seating geometry is a lot friendlier; the raised handlebars, centralised foot-pegs and narrow tank-seat junction make for a very natural seating posture.

To keep in line with our country’s primitive laws, the Versys-X 300 gets a saree-guard that seems like it was designed with the intent of protecting the Queen’s evening bridal gown; or maybe keep stray elephants out, who knows. The tail-end culminates with a neat, upward-swept, single LED brake-light that is shadowed by an even neater luggage-rack. And there’s no end to how useful a luggage-rack can be when you’re out on the open road.The main-stand, hand-guards, 12-volt charging socket, engine and crash-guards, pannier, and auxiliary lights are all Kawasaki accessories, but are included in the stock purchase.The saree-guard will not allow for the second pannier to be fitted; it will have to be purchased separately. And although those curvy header-pipes that emanate from the front of the engine look exquisite, we do wish Kawasaki would offer a bash-plate; they do look too over-exposed for comfort, especially if you’re looking for an adventure. 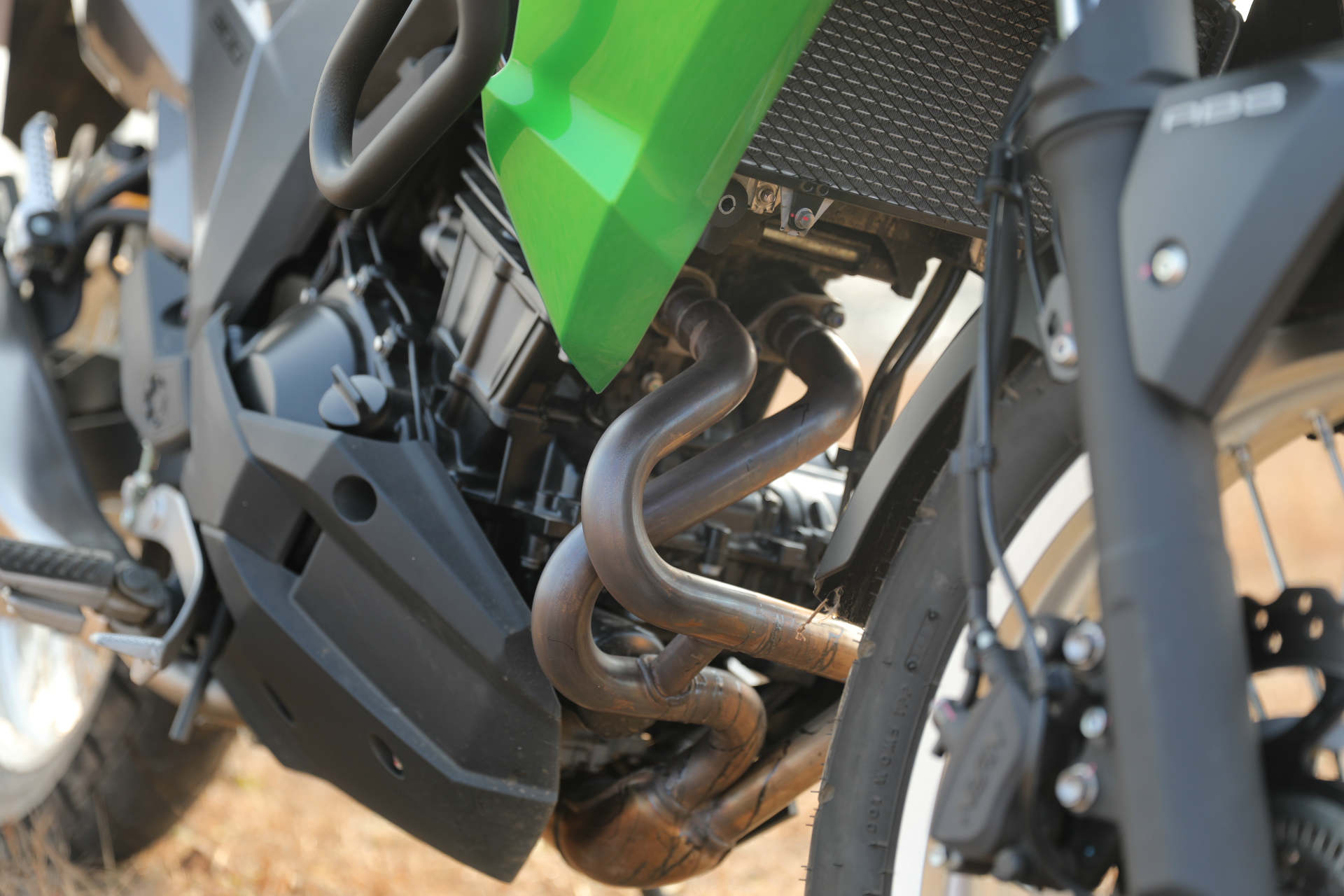 Now Kawasaki is known for its butter-smooth engines, and we expected no less from the Versys-X 300. The 296cc parallel-twin mill has been borrowed from the 2017 Ninja 300 and wedged into the diamond-type tubular frame of the Versys-X. Crank-up the motor and you’re greeted by the ever so familiar exhaust note of the Ninja 300. Pull the clutch-lever in and the sensation is most confusing; there’s absolutely no resistance whatsoever. It made me question whether the cable was attached at all. But once that shift into first-gear happens in a typically Kawasaki, precise manner, you know there is; although it may take a while to get used to it.

Here’s where the confusing part of this motorcycle comes into play. The 39bhp of peak power kicks in at 11,500rpm, 500rpm higher than what the Ninja 300 achieved; and torque is actually down from 2.8kgm to 2.6kgm at 10,000rpm. Kawasaki have taken a sport-natured engine and used those strengths, with a few tweaks to the gearbox and sprocketing, to make adventure riding fun. Essentially, the engine feels like a low-geared version of the Ninja 300.; although the heft of the power remains in the upper echleons of the rev-band. While this is not something you want from an adventure-oriented motorcycle, the sheer tractability of Kawasaki engines has somehow made this a good thing. You can pull-away from as low as 12kph in third-gear; this makes navigating through traffic a much simpler affair. And if you’d like to extract even more tractability out of this engine, it would be advisable to go up a tooth or two on the rear sprocket; you’d even get more power lower in the revs.

Out on the highway, the tall fifth and sixth gears mean you really need to stretch the gears out. And given the low-tractability of this engine, combined with it being a mere 296cc adventure-oriented motorcycle, you’d be surprised to see it hit speeds in excess of 160kph. That being said, it is very rev-happy; and once the revs climb, the exhaust note transforms into a high-rpm scream that will make you really question the intent of this motorcycle.With a 17-litre tank and an overall efficiency of almost 26kpl, you can expect a range of approximately 450km; give or take 50km depending on your riding style.

Off-road, the tractability of the engine makes up for its high revving nature; low-speed crawls are extremely manageable. And since the power is so high up, it’s actually not that easy of a task to get the rear to lose traction and get unsettled. Of course, this could also be attributed to the IRCrubber that does a wonderful job with grip, on and off-road. With a 19-inch front and 17-inch rear wire-spoked wheels, you also have the freedom to switch over to more dirt-worthy tyres.

Another aspect that Kawasaki have absolutely nailed with this bike is weight management. Despite it having a kerb-weight of 184kg, it feels like a 20kg lighter motorcycle. Much of this could be attributed to the narrow girth of the mid-section of the bike. Standing ergonomics feel extremely natural too; though not an all-out off-roader, this bike could do trails all day, easily. Although taller riders may want to raise the handlebar a bit.

On the road, the Versys-X feels rather nimble for a tall motorcycle. It carves corners In a rather composed manner; to the point you’d actually get the pegs scraping. That being said, the bike does feel a bit nervous at high-speed and just doesn’t have the stability of the heavier bikes.And the KYB suspension does a wonderful job on and off the road. Its got a whole 130mm of travel at the front and 148mm at the rear. Combine this with the 180mm of ground-clearance and you could probably conquer all but the gnarliest of off-road situations, or simply smashing the header pipes. Ride-quality over our shoddy roads is absolutely commendable; it just glides over road-imperfections and potholes.

The Versys-X 300 does come equipped with ABS. That being said, the 290mm disc at the front really requires a massive handful of squeeze for the ABS to engage. Despite this progression being a good thing, the brakes feel a bit wooden and lack that precise feel. We would have honestly liked a better set of front anchors. The rear is progressive too, but it works a lot better in this case. Since most modern bikes have negligible weight over the rear tyre, the rear tends to lock-up easily over harder road surfaces; that isn’t the case here. And it works brilliantly off-road too; despite the front having the tendency to lock up, the amount of engine braking on offer really allows you to keep front-braking to a minimum. 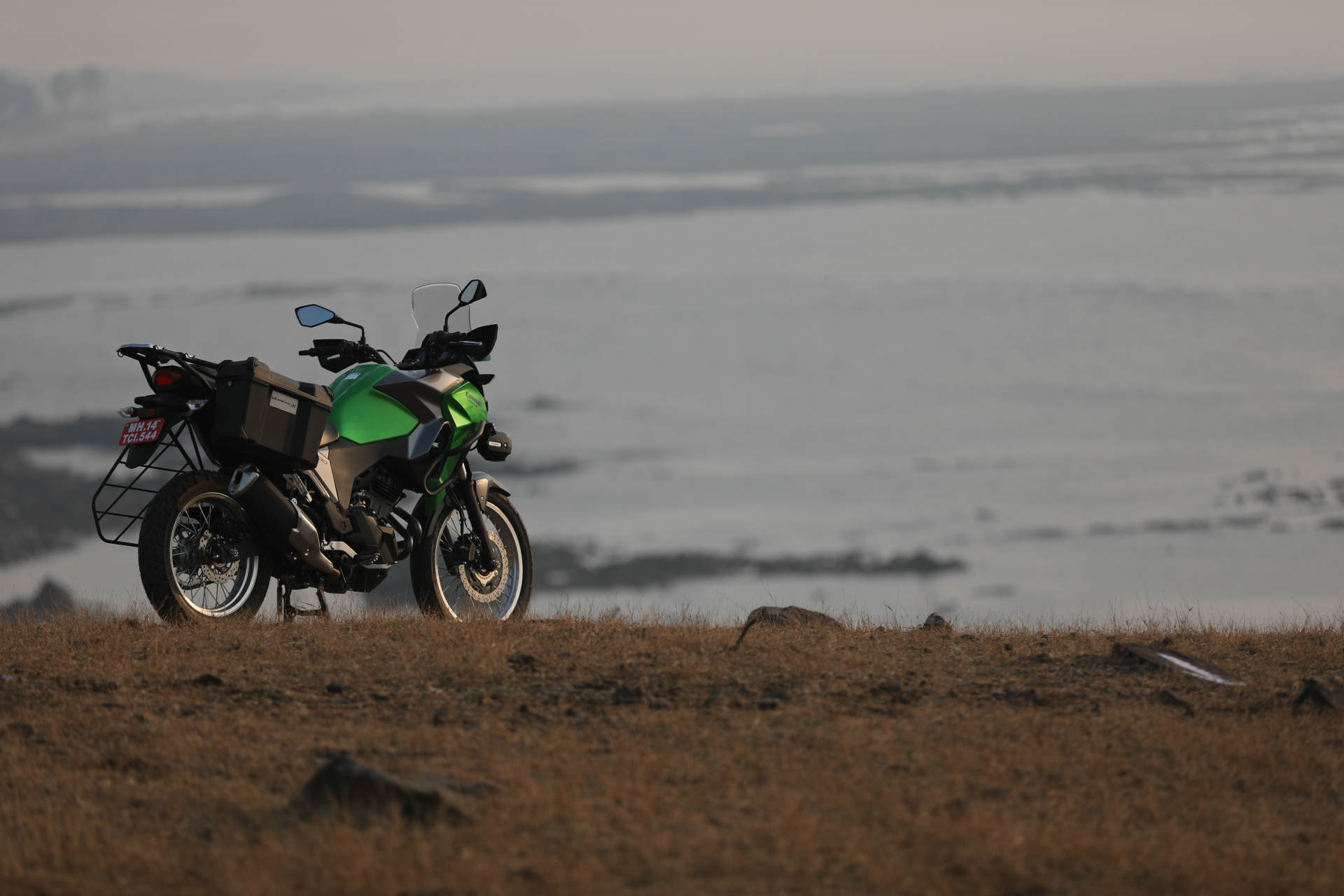 As it is, the Kawasaki Versys-X 300 is a robust, capable and really good-looking motorcycle. It’s light and effective, and will probably smother many, if not all, the gargantuan pseudo-adventure motorcycles off-road. Its perfectly capable of handling the call of the highway and being an extremely competent commuter too; this is an everyday bike, period. Although if I did have one concern with the motorcycle, it would be the pricing; which has been driven up by the inclusion all of the accessories in the purchase, despite it being a CKD. Five-plus lakhs on-road does seem a tad over-priced to me. That being said, the Versys-X 300 definitely feels like a sensible buy. And once you get used to its rev-happy nature, it will be the hooligan your wife, girlfriend or mother warned you about.

You can have a look at more photos of the Kawasaki Versys-X 300 in our gallery by clicking here.