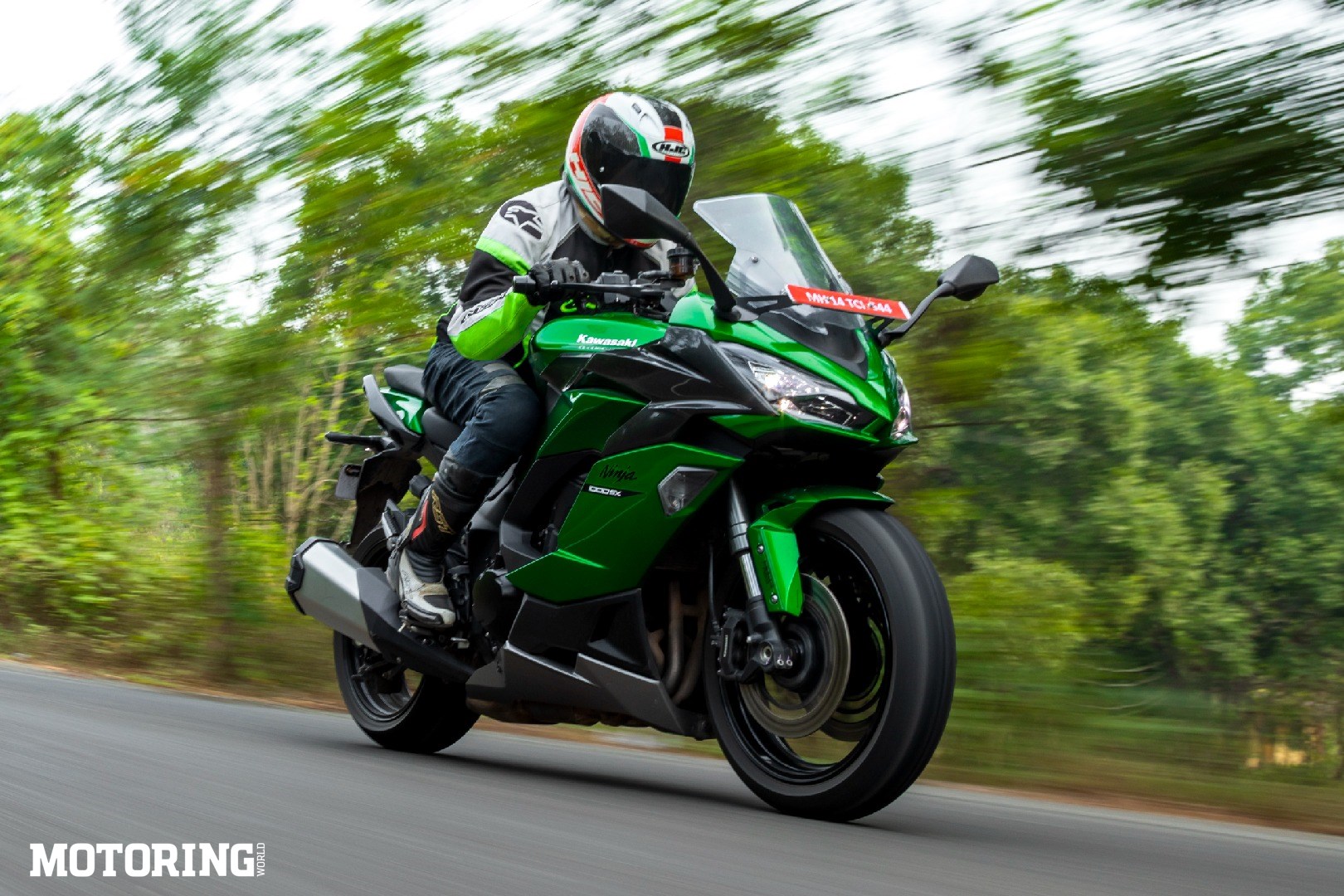 Over the years, motorcycles have borne names that have tried to crystallise their essence. The Suzuki Hayabusa is named after an iconic bird, the MV Agusta Brutale for its brutal nature, the Honda Fireblade for its flaming performance, to name a few. And if there’s one more name that has been summed up by the motorcycles it’s been on, it’s the Ninja. Right from the small 300cc to the flagship H2, every Kawasaki Ninja has been a stealthy, deadly machine, ready to attack on demand. 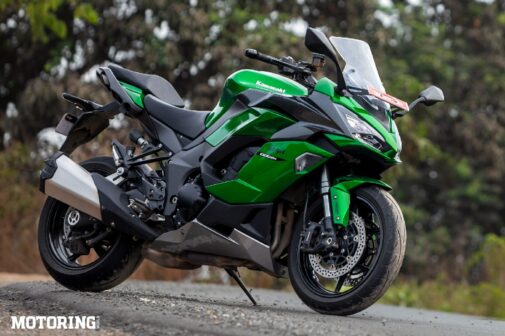 Litre-class bikes are proper scare-machines, and anyone who says otherwise is probably the one who will end up wrapped around a lamp post; even a professional racer is well aware of the potential of these bikes, and will always take into account the risks involved in riding one. All modern-day litre-class motorcycles belong in the 200 bhp category, and some have even more. Forget riding them hard, just being able to tame these beasts is an achievement in itself. The one here bears the Ninja name and is a litre-class motorcycle – but it’s different. It’s the Ninja 1000 SX, Kawasaki’s superbike that is oriented towards sports touring.

The Ninja 1000 SX is currently the most-affordable litre-class sports bike that money will get you in India. It’s affordable only because Kawasaki has been kind enough to offer a little less of a brutal option in its portfolio, for those who want to experience inline-four performance without the terror. Unlike the 998cc mill on the ZX-10R that produces 200 bhp, the Ninja 1000 has a relaxed tune from its 1043cc motor, making 140 bhp. It’s less power when compared to the ZX-10R, but otherwise, it’s absolute Ninja material in every possible way. The hunk of a motor lives within that twin-tube aluminium frame and with everything on, tips the scales at 238 kg. What it lacks in power and weight, the Ninja 1000 makes up for in terms of ergonomics, which I will get to later. 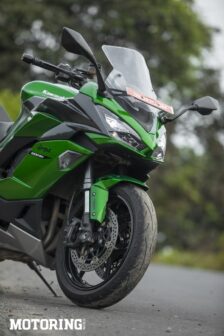 The powertrain has a bunch of rider aids that include four riding modes — Road, Rain, Sport, and Rider – the last one allowing each of the systems to be set independently. In addition to that, there’s cornering ABS, traction control, cruise control, and also an electronic quickshifter. This is apart from the infusion of racing genes acquired over the years from different kinds of motorsport. 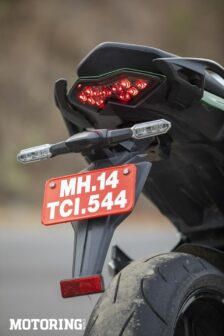 Looking at the dimensions of the Ninja 1000, you might have mixed thoughts about the bike’s agility and handling — but just wait till you ride it. Except for being heavy on paper, this green machine is a thoroughbred Ninja. Once you get rolling, all that weight magically disappears, making it an extremely well-balanced and agile motorcycle. Tip the bike into a corner and it gracefully leans inward as you aim for the apex, followed by the exit out of the corner. Sharp hairpins, however, need to be taken at a much easier pace, but smooth sweeping corners are an absolute delight. If I had been wearing knee sliders on the day of the shoot, I would have been confident enough to scrap them for sure. I say that because the bike has a lean angle display in the 4.3-inch all-digital TFT instrumentation, which gives you information about every possible aspect of the bike. I could see my lean angles touching the 40-degree mark, and with more degrees of lean in store, I would have easily scraped my sliders. 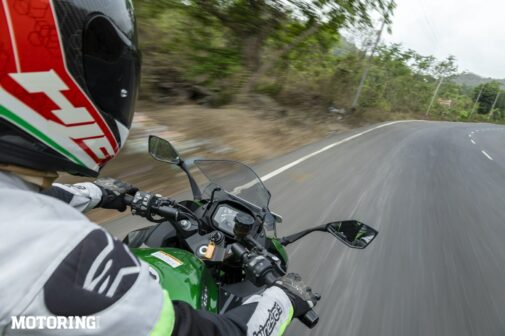 Within seconds of letting the clutch in and a healthy twist of the right wrist, the Ninja 1000 launches like a missile. The surge of speed is immediate and extremely refined, as the tachometer climbs towards the 11,000 rpm redline in a blink. The behemoth of a machine is quick on its toes, as it does justice to the razor-sharp lines that form its shape. I had thought, at one point, to turn the traction control off and try to see if I was able to pop a wheelie on it, but I dropped the idea after it did an unexpected power wheelie as I was going over a crest; once the front gets off the ground, it only wants to go higher. 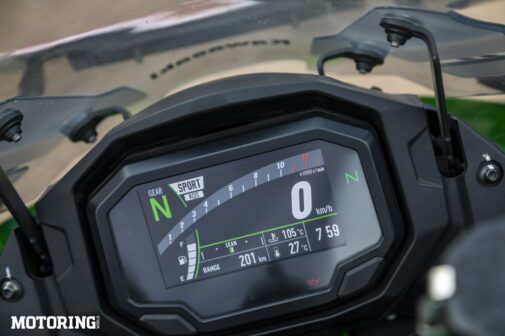 When not going hard on the gas, this Ninja transforms into a different personality; it feels calm and composed and rides like a well-behaved cat while the inline-four purrs through the 4-2-1 exhaust. It feels as if the bike is humming a tune, with the highs and lows of the motor in sync with the curves and straights of the road. 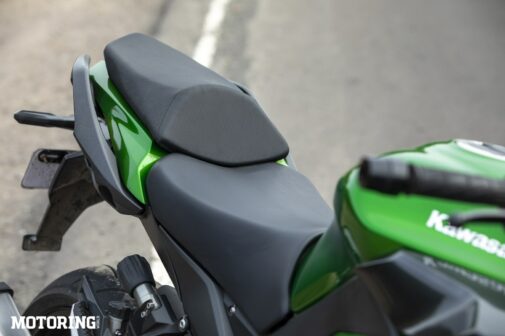 Being a litre-class machine, the Ninja 1000 doesn’t take much time to clock speeds that mark the start of triple-digit territory. The first four cogs are sufficient to achieve that, but what impressed me more was how effectively this motorcycle manages to shed speed. Equipped with twin discs at the front and a sizable single at the rear, the Ninja 1000 is clinical in the braking department. The USDs do not have much fork dive, which opens the window for more brake pressure to be applied at the front. Special mention goes to the Bridgestone Battlax Hypersport S22 tyres which, while not the greatest in terms of feedback, offer lots of grip despite the best of attempts of the Ninja’s motor to shred them. 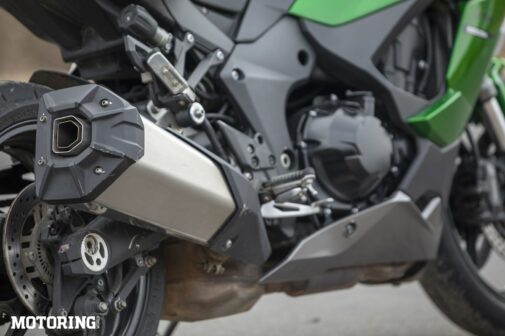 This is further aided by the fantastic weight distribution and suspension setup, which can be adjusted at both ends to the rider’s preference. You can apply any sort of riding style to the Ninja 1000 and it will respond with the same intensity, every single time. Despite its shenanigans, however, the Ninja always imparts a feeling of absolute control, which can be credited to the quality of the cycle parts and the bike’s overall setup.

With most litre-class bikes, the rider needs to be OK with substantial compromises in terms of comfort, but that’s not the case with the Ninja 1000. Thanks to its inclination towards sports touring, it has one of the best saddles in the segment. The riding triangle is not too aggressive, and the handlebars are easy to reach. The seat stands at 835 mm off the ground, but the way the saddle has been contoured, it’s easy to achieve a firm footing on a flat surface. Your feet fall naturally onto the pegs, which means that there are no worries about cramps and numbness even after riding for a while. The hump at the back of the rider’s seat helps to secure your body onto the bike, giving you the feeling of sitting in the bike, rather than on it. 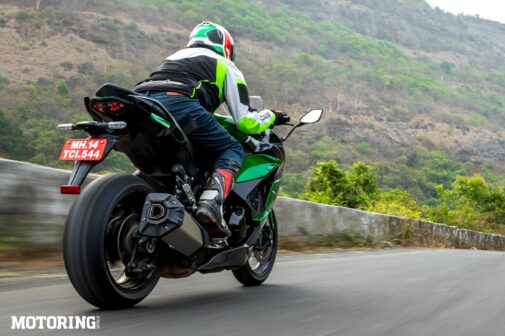 The Ninja 1000 SX is a legit litre-class superbike and lives up to the Ninja name. Its relaxed performance numbers might look less on paper, but in the real world, it packs enough oomph to provide an engaging experience that is not outright scary. If you are a sucker for inline-4s, but too intimidated by the kind of power they possess, the SX is the bike for you to consider. Besides rewarding you with the delights of a four-pot banger, it is also the perfect tool to hone your riding skills for when you graduate to faster machines. That last bit makes this motorcycle a special one.