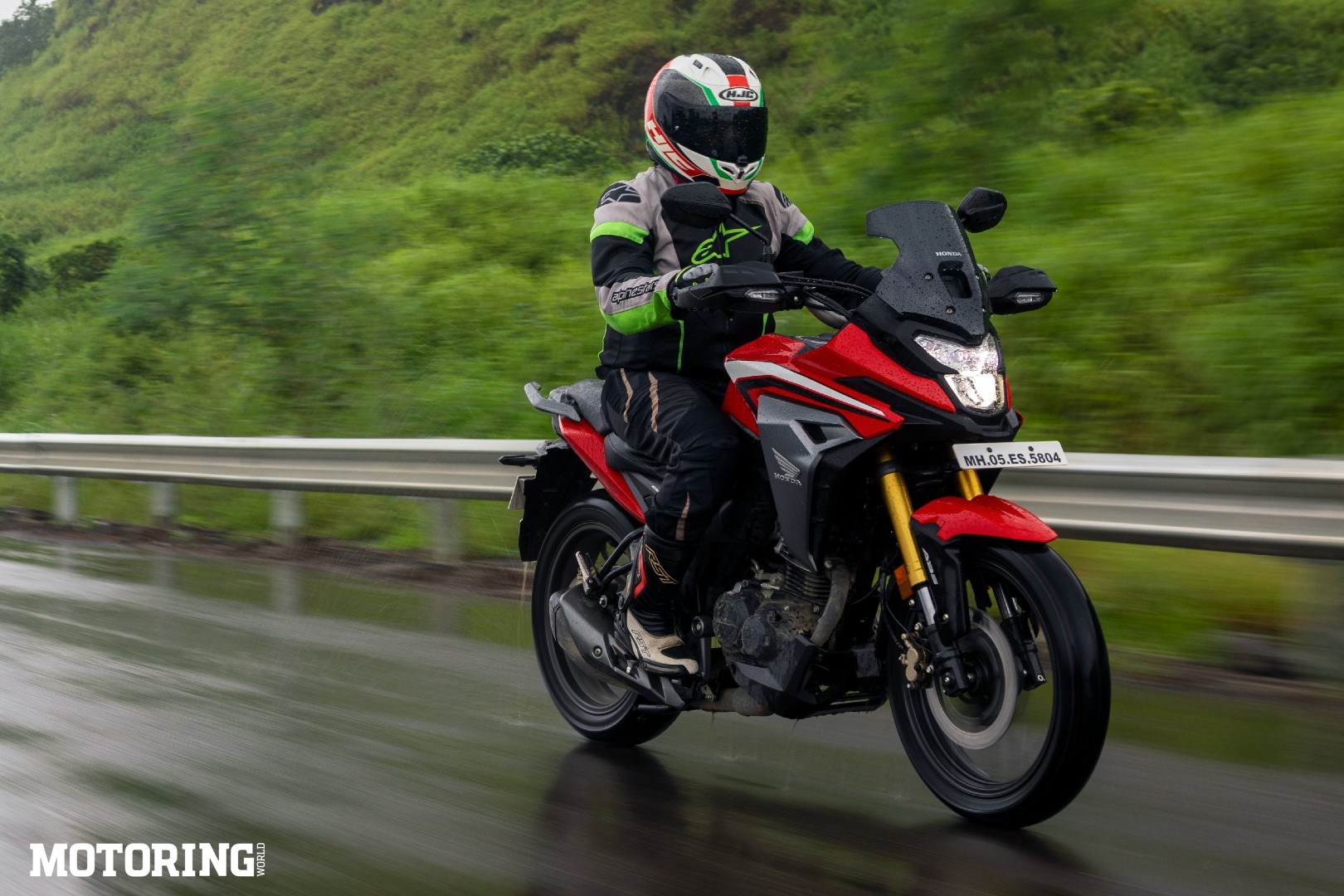 What is it?
This is the CB200X, Honda’s newest motorcycle for those who want to conquer the urban jungle. You see, there’s a shift happening with the preference of motorcycle type in the current two-wheeler market in India. More and more motorcyclists are wanting the inclusion of adventure in their motorcycles that can take on soft off-roading whenever the occasion calls for it. Looking at these conditions, Honda noticed a space vacant for a soft off-roader and hence to cater to this set of aspiring buyers and also make the best of the opportunity at hand came up with the CB200X. 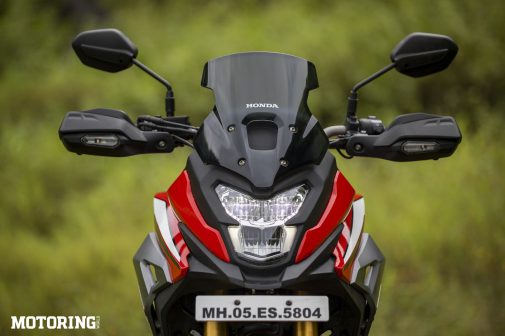 Whom is it for?
It’s for those who wish to experience the feel of riding an adventure motorcycle in their daily in-city commuting routine. That said, Honda has revised the seating triangle with the CB200X offering a more upright and commanding stance thanks to the inclusion of a wide handlebar. The step-seat not only gives the motorcycle a premium look but also benefits in providing the rider with a bit of lower back support and a better view of the road ahead to the pillion. While the seat is visually large, being an urban explorer it lacks the required under-thigh support that’s needed when considering the time the rider will be spending on the saddle. Since we are talking about the riding stance, the footpegs are positioned in the same spot as they are on the bike it is based on, the Hornet 2.0. The pegs are rear-set which conduct a sporty position for the lower torso while the upper body has a rather upright stance. 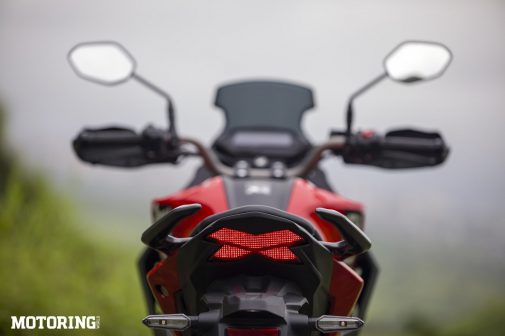 Now, if you are expecting a proper adventure touring kind of motorcycle, you are probably looking at the wrong machine here. The CB200X is an urban explorer, as per Honda, and it is meant chiefly for the urban jungle and some level of soft off-roading on B-roads. Based on the Hornet 2.0 street bike, it shares most of its underpinnings, trail section and a few other components like the headlamp, tail lamp and instrumentation. However, Honda has managed to pull off a nice one with the CB200X’s looks. The taller stance with the sculpted look gives the motorcycle a sharp and edgy appeal. The distinctive tank extensions draw their inspiration from the CB500X and Africa Twin, giving the bike a beefy look. To go with that, the CB200X features a tall windscreen to deflect the headwind away from the rider, beak-like front end, knuckle guards incorporated with turn indicators and an engine belly guard. 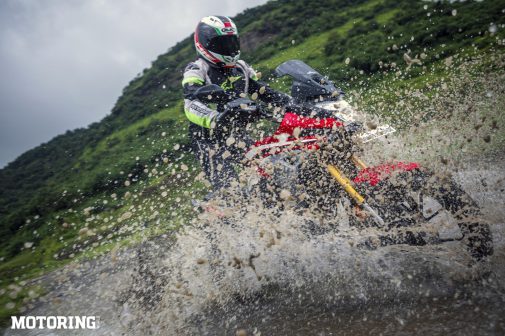 How does it handle?
After spending enough time riding the bike on different road surfaces, traffic conditions and also in the rain, the CB200X performed well. Since it is based on the Hornet, the suspension travel from the USDs at the front and monoshock at the rear along with the braking hardware has been directly lifted from the Hornet 2.0, without any alterations. That said, the CB200X offers a similarly engaging experience like its streetbike sibling, when filtering through traffic or attacking sweeping corners. 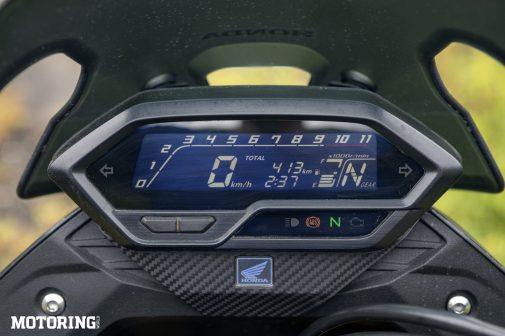 Since you are sitting a bit higher off the ground, you get a slightly better view of the road ahead, and the wide handlebar contributes to easier manoeuvring when taking u-turns or then making way through bumper to bumper traffic. The bike features disc brakes at both ends while the front is accompanied by single-channel ABS. The brakes are decent in terms of performance, delivering a good bite and progression. However, a little more feel from the front would have been nicer. Next are the block-pattern MRF Zapper Kurve-F tyres that, besides their rugged look, perform well on concrete, asphalt and B-roads. Since there isn’t much power to break traction that easily, the tyres held up well for the tasks at hand. 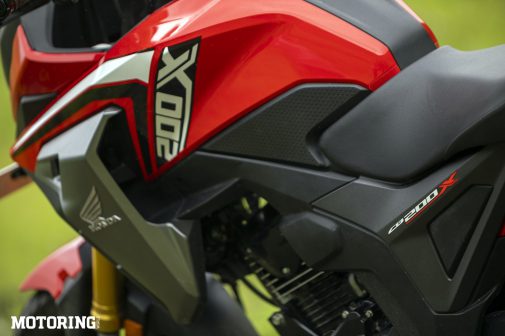 How fast is it?
As mentioned earlier, the CB200X is based on the Hornet 2.0, and it is the powertrain that has been directly lifted from the latter. The motor is the same single-cylinder 184cc air-cooled unit that produces 17 bhp and 1.64 kgm of torque. As far as performance is concerned on paper, it isn’t at par with other motorcycles in the segment. Also, in comparison to the streetbike, the CB200X is heavier by 5 kg, which does take a hit on the overall performance of the motorcycle. While the top speed attained of 110 kph remains more or less the same, the motorcycle takes a tad bit longer in acceleration. Besides that, it’s the same super refined scenario with the motor. The delivery of power is uniform and gradual while the gear shifts are slick with no false neutrals or miss shifts to complain about. 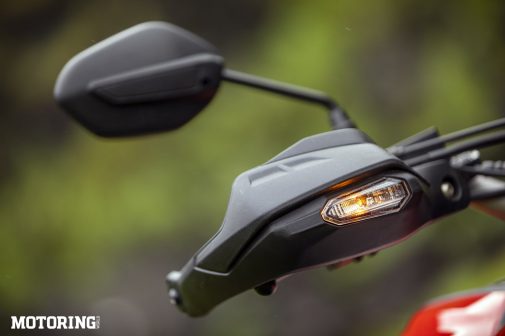 Is it fun?
The CB200X might not be an outright fun motorcycle to ride but it does offer the typical Honda refinement and agility of the city motorcycle along with a more commanding stance while riding one. It might not be a thoroughbred adventure motorcycle, its purpose is to tame the urban jungle which it manages to do with pretty will. The added body shell delivers a big bike appeal which would be appreciated by many buyers. The refined motor keeps things calm and composed when commuting till the mid-range and beyond that packs a decent amount of punch to keep things engaging. At Rs 1.44 lakh (ex-showroom), the CB200X demands a premium of Rs 13,000 over the Hornet 2.0’s sticker price. If the premium isn’t too much of a stretch, what you get is the tried and tested underpinnings of Honda’s street platform in an adventure-type motorcycle format with wider seats, ADV styling, block-pattern tyres and a wide handlebar. If that rocks your bike, the CB200X is a good proposition to consider for the concrete jungle.