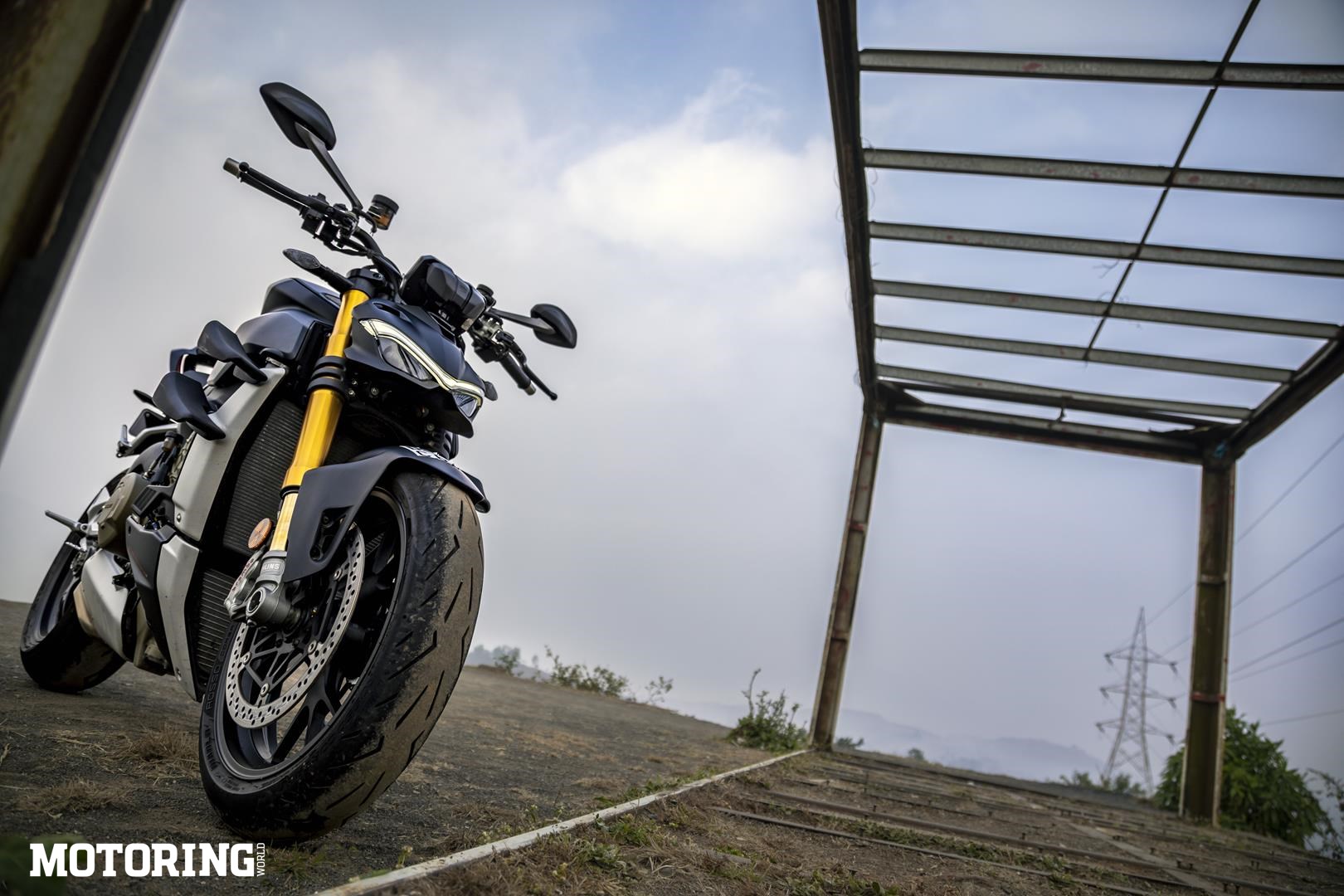 It has winglets that create 28 kg of downforce above 270 kph. It uses the same aluminium monocoque chassis and steering geometry of its faired sibling which is competition-ready right off the production line. Its engine is derived from the 2014 MotoGP Desmosedici bike and redlines at 14,500 rpm. And at 205 bhp, it is one of the most powerful production naked motorcycles on this planet — it has a power-to-weight ratio of 1030.90 bhp per tonne, which translates to absolutely stupendous neck-snapping power at the twist of the wrist. It’s an Italian thoroughbred without a doubt, with only one task — rule them all! The bike in question is the Ducati Streetfighter V4, and the one here is the top-spec S version that comes with all the bells and whistles that Ducati provides for extra dough. Last month, I had its sport-touring sibling, the Multistrada V4, a bike that is nothing but pure awesomeness. So, naturally, I was left grinning ear to ear when I reached the Ducati dealership to collect the Streetfighter. Talk about consecutive dates with two hot Italians. 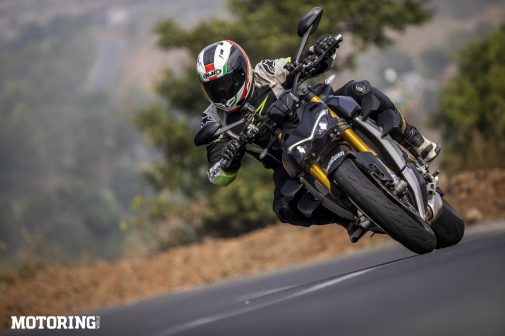 The Multistrada V4 is all about versatility and finesse. The Streetfighter V4 does not care two nuts about any of that. All it wants to do is inflict mayhem from the moment you crank up that V4. The sheer brutality of this bike is quite scary, but at the same time also equally rewarding. The latter because Ducati has packed in all possible forms of riding technology you can think of on two wheels. Besides all the aids that are common amongst new-age flagship litre-class bikes, the Streetfighter gets the latest wheelie control system with eight levels of setting and self-limiting torque function for the first four cogs. Its wheelbase is longer by 19 mm over the Panigale, and the motor has a counter-rotating crankshaft, which prevents the front end from lifting under hard acceleration. So, from the second gear onwards the front stays on the ground, allowing the rider to keep that throttle open and rev all the way to the redline.

Speaking of redlining, the V4 mill revs so quickly, I couldn’t believe that I was shifting cogs at the 9000-rpm mark for the longest time, unaware that I still had 5500 rpm more at my disposal. And trust me, when I did use the rest of the rev band, it was altogether a different experience. Everything around me blurred out in an instant, the engine suddenly felt quieter probably because I was accelerating so fast that all my other senses had shut themselves off. I did not have the guts to look down to check the speed, but I am sure that I had breached the 200-kph mark. That’s the Streetfighter V4 in a nutshell.

On the flip side, when I wasn’t riding like a maniac, the Streetfighter turned out to be a surprisingly manageable bike in the city. The riding position is sporty, but there is a decent amount of legroom to move around on the saddle, and for the knees. The flat handlebar is six inches taller than the Panigale’s, making a world of a difference for street riding. Unlike superbikes, where the wrist, knees and neck start to hurt after a reasonable amount of riding, there is nothing of that sort with this Ducati. Even the cooling system and the rear cylinder deactivation system is so efficient that I didn’t feel my thighs burning up every time I stopped at a signal. For a naked, there is no wind protection as such, but instead of sitting upright it is easier to lean into the wind.

The other aspect that makes the Streetfighter easier to ride is that all this power and torque is usable thanks to the suspension. The test bike featured electronic damping for the Ohlins suspension, lighter forged wheels and an electronic steering damper. With the press of a button, the suspension is designed to adjust to road conditions, altering the damping for optimum traction. I can appreciate this because the Triumph Speed Triple 1200 RS, despite the Ohlins setup, didn’t have electronic suspension which resulted in a very unforgiving bike. Around the twisties, the Streetfighter sticks to the line like its on rails, but it’s also willing to let that tail kick out if you have the cojones to carry it through the corner. 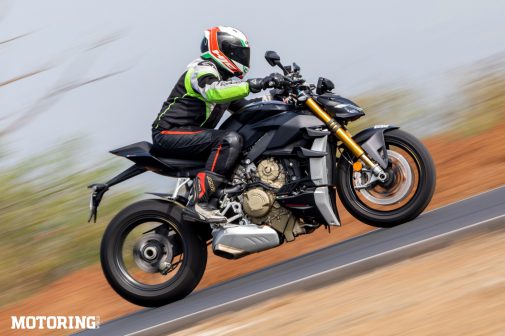 All of the above savagery feels achievable and controllable only because of the fantastic rider aids and mainly due to the absolutely fantastic brakes. Equipped with 330-mm dual rotors at the front with Brembo Monobloc Stylema four-piston callipers and a 245-mm single disc with a two-piston calliper at the rear, the anchors on the Streetfighter V4 are the best that I have experienced so far on any motorcycle.

That said, are there no qualms about this motorcycle, then? Just two, if I had to nitpick. First is the wide turning radius that’s quite bothersome on a naked bike, but only if you like riding around taking U-turns. And the mirrors are not that useful, showing more of the rider’s elbows rather than what’s behind. Which again mostly matters when you are riding at a slow pace. 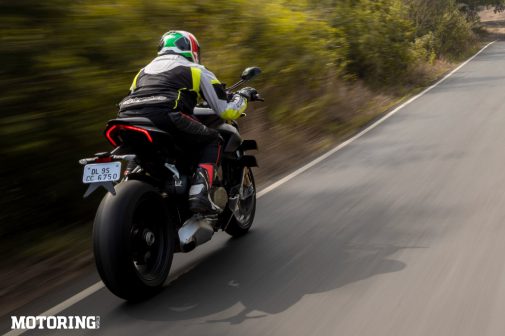 After having ridden the Streetfighter V4 S, I am smitten. Ducati has retained the character of the Panigale V4 with all the brutal power, a punchy mid-range, and electronics, while including lots of comfort which is practically non-existent with the faired one. The Streetfighter V4 is a bike that has top-of-the-line stuff from front to rear, making it a fierce motorcycle with a demonic charm that is very addictive. This Ducati is like an indulgence that does not make sense. But again, some bikes are never supposed to make any in the first place. The Streetfighter V4 is all of that and much more.