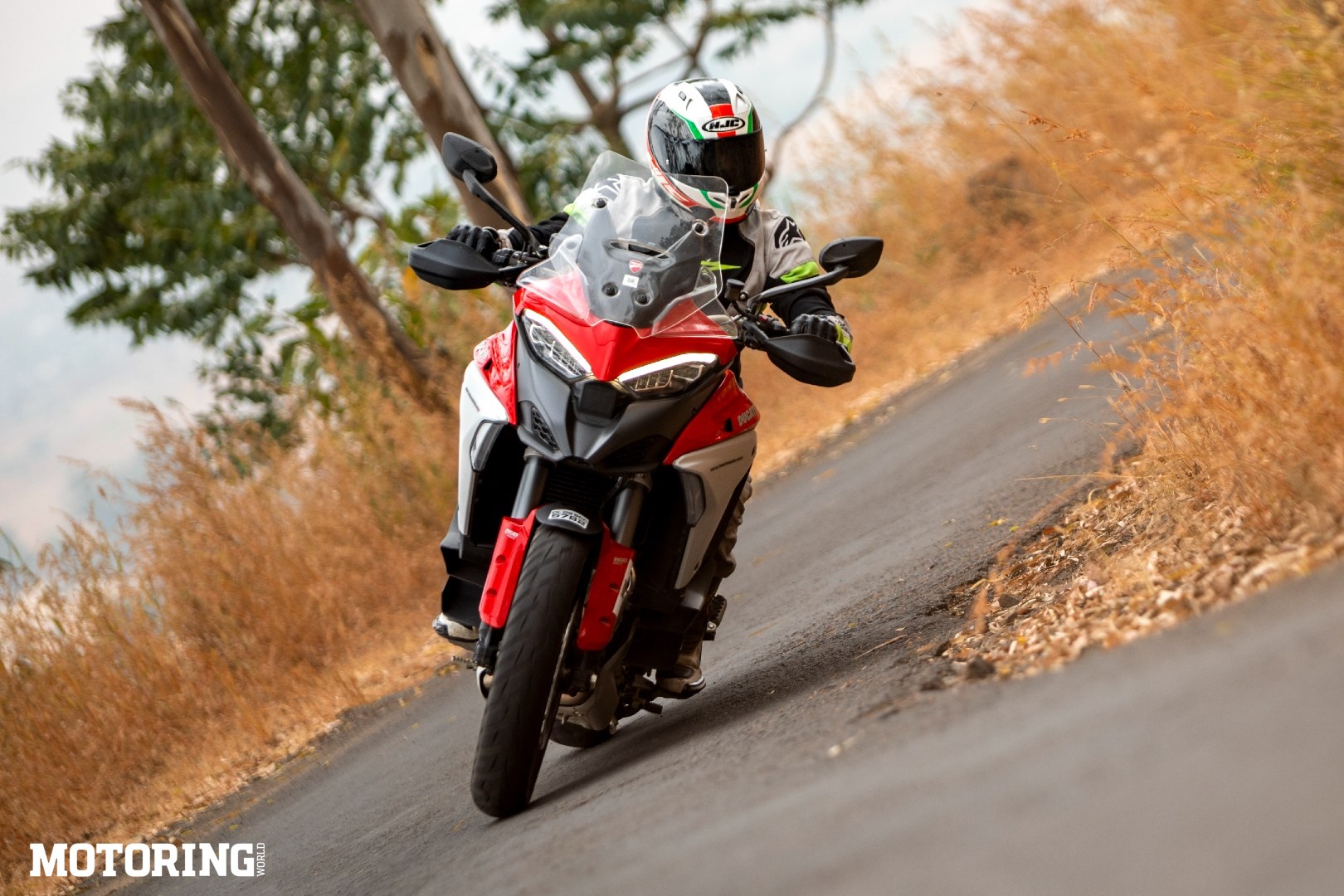 If the time ever comes to switch careers and rob banks for a living, the Ducati Multistrada V4 S will be the first motorcycle I’d buy without wasting a minute. This was one of the many thoughts that went through my mind while riding this very red motorcycle. I was on NH 48 en route to Pune, and while I knew I had a long day ahead, the Multistrada V4 felt like the right machine for the day. I have ridden previous generations of the Multi and its different variants, right from the accessible 950 to the high-spec 1200 Enduro, and each one has made me wonder how Ducati managed to fit different motorcycles in one.

For the kind of rider I am, I enjoy sport riding, touring, adventure riding and track days in equal measure — and the Multistrada excels at all of them. Ducati had already achieved this level of versatility with the previous-gen one, and it has bettered it with the Multistrada V4. With firepower from the Panigale’s V4 motor, there is an abundance of power and torque which offers front-end-lifting superbike levels of acceleration, and a smooth tractable slab of torque for mile-munching and city riding, too.

I started my day at 0400 hrs and since the streets were practically empty, of the four riding modes to select from, I started with Touring for the first leg of the journey. The Multi didn’t take much time to exit the city and soon I was on the highway. Touring mode relaxed the throttle, softened the chassis and calmed the nature of the V4 for a more composed riding experience. The aim was to reach Pune before sunrise, which meant I was totally dependent on the bright LED headlamp to light up the road. If you haven’t experienced cornering lights on a motorcycle, you just have to on this motorcycle. This feature completely eradicates dark patches while cornering.

While I was covering ground at a record pace, I was surprised when I reached the outskirts of Pune in approximately half the time that Google Maps had predicted. I realised it when I had pulled into the fuel station to fill up the 22-litre tank, and with time to spare, I took a good long look at the bike. Ducati has not deviated from the design of the previous generation much, but at the same time there are a lot of improvements and additions that accentuate the overall experience. The windshield can be raised or lowered with a gentle push for more than ample protection from the wind. The fins on the side fairing do an excellent job of redirecting engine heat away from the rider. And the mirror stalks have a curved design that doesn’t come in the way during stand-up riding. Details like these tell you how much the Multistrada has been refined.

As I was getting ready to saddle up, I realised that I didn’t feel the need to stretch or flex my body at all. The compliment for that goes to the bonkers Skyhook electronic suspension, which puts the Multi at a far superior level in terms of ride quality. From smooth paved roads to B-roads to no roads, the suspension is constantly adapting and adjusting itself to offer the best possible ride for the terrain in question.

The other reason why the Multi is such a versatile motorcycle is its carefully tailored electronics package. The six-axis IMU-supported rider aids are a standard affair along with the four riding modes, completely altering the bike’s character at the touch of a button. Furthermore, other factors such as the engine power, traction control levels, wheelie control, ABS intervention, and the suspension preload and damping settings can all be adjusted through the 6.5-inch TFT display to the rider’s preference.

To reach the shoot location, there were a few patches where the road was rough and unpaved. I switched to Enduro mode and the Multi easily cleared the sections as if it was nothing. I say this because it sometimes becomes difficult to tackle such terrains on a big bike. One can easily lose balance and spin out on giving too much gas, but in case of the Multi there was absolutely no drama. The traction control system was very clever, only cutting power when actually needed. The suspension absorbed most of the bumps and undulations keeping me calm and relaxed.

By the time we got done with the shoot, I was running late for a press conference. Since it was almost noon and the road to the venue was mostly highways, it was the perfect time to try out the Sport mode. The difference was pretty much instantaneous as the suspension became stiffer and the throttle became a lot more alert to my righthand inputs. Whether it was filtering through traffic or cornering through long sweeping turns, the V4 stuck to the intended line while constantly providing feedback from both contact patches. With the kind of show this motorcycle was putting up, I was confident it would embarrass a good bunch of superbikes.

Having reached the venue, again with time to spare, the Multi was grabbing a lot of eyeballs at the hotel’s front porch. Adventure and touring bikes are built for versatility and practicality, and are nothing but ugly in terms of looks. Ducati, however, has managed to take care of that as well. The Multistrada V4’s well-contoured and defined lines show that Ducati wanted to make the best-looking adventure bike, and it’s aced that.

Soon, it was time to get back on the saddle and head back to Mumbai. Back in Touring mode, I took the opportunity to test the adaptive cruise control (ACC) and the blind-spot detection (BSD) on the highway. With three distance-adjustment levels, the ACC maintained the set distance from the vehicles ahead, accelerating and decelerating depending on the data received from the bike’s radar. And the BSD would illuminate LED lights on the rearview mirrors, warning of any traffic approaching from behind. Lastly, the Multistrada V4’s radar system can also engage the brakes to avoid a collision if the bike approaches a vehicle up front at a high rate of speed. Since the other radar features were very much operating as expected, I chose not to test the last function. 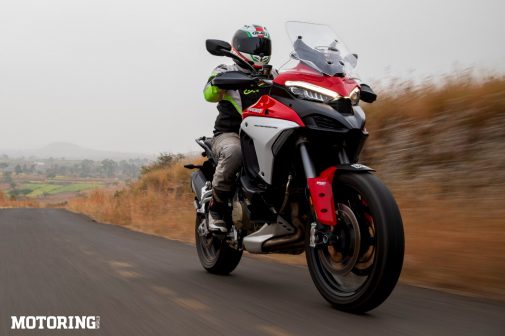 Since we are on the topic of braking, the Multistrada V4 comes equipped with Brembo Stylema front calipers which, paired with cornering ABS and Pirelli Scorpion Trail II tyres, makes you feel invincible with stopping power. The tyres are so good that they offer ample grip over most terrains. Good brakes are a must for trust and confidence to push the motorcycle, and these Brembos do just that. 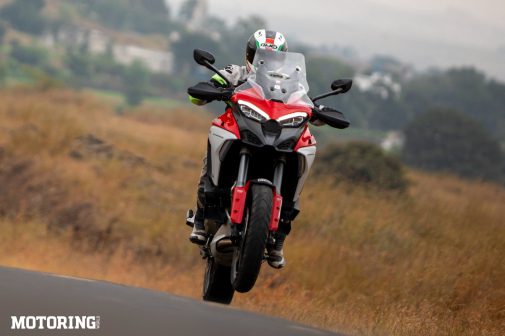 By the time I crossed Mumbai’s traffic and finally reached the Ducati shop to return the bike, I realised the bike could still keep going on and on, while I was pretty much exhausted. But I was only able to pull through it all because of the motorcycle; had it been any other motorcycle, I would have ended up taking a lot more breaks and definitely had even more fatigue. 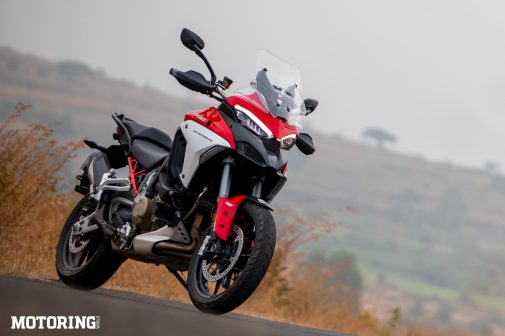 In hindsight, I recalled the day’s timeline and how the Multi took it all in its stride without breaking a sweat. The Multistrada V4 may belong to the heavyweight ADV class of motorcycles, but looking at the bike’s capability, practicality, equipment list, and most of all its versatile nature, it leaves nothing to complain about. If there is one motorcycle that can do it all, it’s this one. I think I am going to daydream of robbing banks a whole lot more.