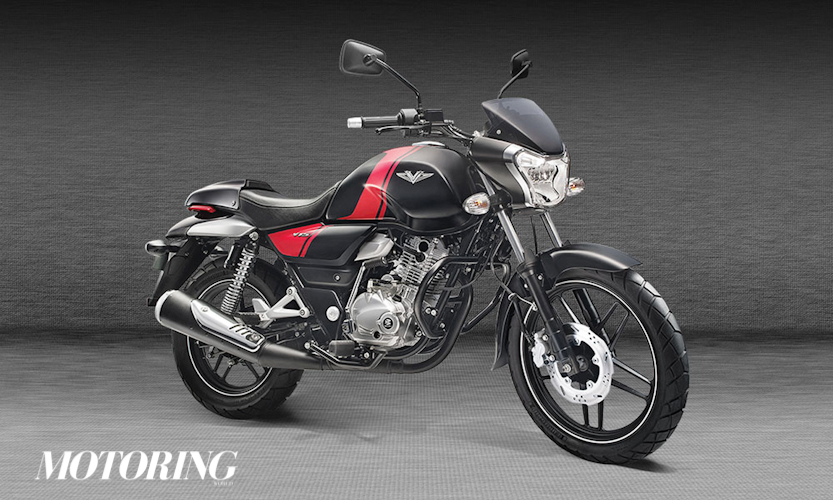 As far as hits and misses go, the V15 is a big number for Bajaj. It has all the makings of a truly outstanding motorcycle — a brilliant marketing spin, non-conformist styling and a lot of research to back up its credentials. Is it a stroke of genius, then? Or just a shot in the dark?
Bajaj definitely thinks it’s more of the former. The V15 has been in the making for a considerably short period of time and this decidedly non-conservative project was assigned, rightfully so, to a very young team. The V15 has made headlines primarily due to its INS Vikrant connection (more on that ahead) but there certainly is more to it than just that.

HEAVY METAL
Admittedly, the INS Vikrant bit came in much after the design development of the V15 was frozen. It was, however, too good an idea for Bajaj to be able to resist. Bajaj acquires the INS Vikrant’s metal in the form of ingots provided to the latter’s scrapping authorities, refines it to match a specific metallurgy standard and then uses a small fraction of it in the fuel tank assembly. This, Bajaj thinks, is good enough to last the V15’s intended production run — provided the V15 does enjoy that sort of success, that is — after which you’d be looking at an evolutionary step-up or a complete replacement anyway.

THE DON’T-CARE STYLING
The V15 was certainly destined to be a commuter but the design brief was clear — make it like nothing else. The young design team at Bajaj decided to arrive at form inspired by function. Comfortable commuting was paramount but so was presence and an aspirational quality. It was to be — and we mean no offence here — a sort of Royal Enfield for the commuting segment; exclusive, in a field of its own and yet very functional. The ‘looks-like-a-Guzzi-if-you-squint’ styling was arrived at after added emphasis on commanding yet relaxed riding geometry and the operative word, throughout, is ‘neo-classical’ rather than ‘retro’.

WHAT YOU WANT
The V15 — that’s what Bajaj thinks you really want. Or need. Okay, either of the two. While Bajaj is clear about the fact that the V15 is going to be no great shakes up your favourite hill, it does claim to offer really terrific low-down torque and urban rideability. Its 150cc, twin-spark mill is allegedly all-new (oh, how we love going all news-ey) and, crucially, has made the big sacrifice of power in favour of torque. Why not both, you ask? From what we understand, while more power would have made the V15 worthier of its metal, a further drop in fuel-efficiency would have kept prospective commuter-segment upgrade seekers at bay. As a result, the V15’s 149.5cc motor produces 11.8 bhp at 7500 rpm but a neat 1.3 kgm at 5500 rpm, which is pretty impressive. Take into consideration its 135.5 kg kerb weight, 780mm seat height and 1315mm wheelbase and what you’re looking at is a meaty(ish), low-slung, flickable and yet very poised motorcycle for the city.

COOL METAL?
Tricky question. The V15 is undoubtedly a very different take on the commuter motorcycle as we’ve known it, but whether its uniqueness translates to superiority, only its price tag and on-road performance will tell. We think it’s quirky-cool and if it’s the success story Bajaj would like it to be, it will propel other manufacturers to conjure up truly exciting commuters. With a price tag of ` 62,000 (ex-showroom, Delhi), the V15 might just appeal to those for whom the commuter motorcycle is a matter of uncompromised function rather than economic limitation. The big question is, will it?