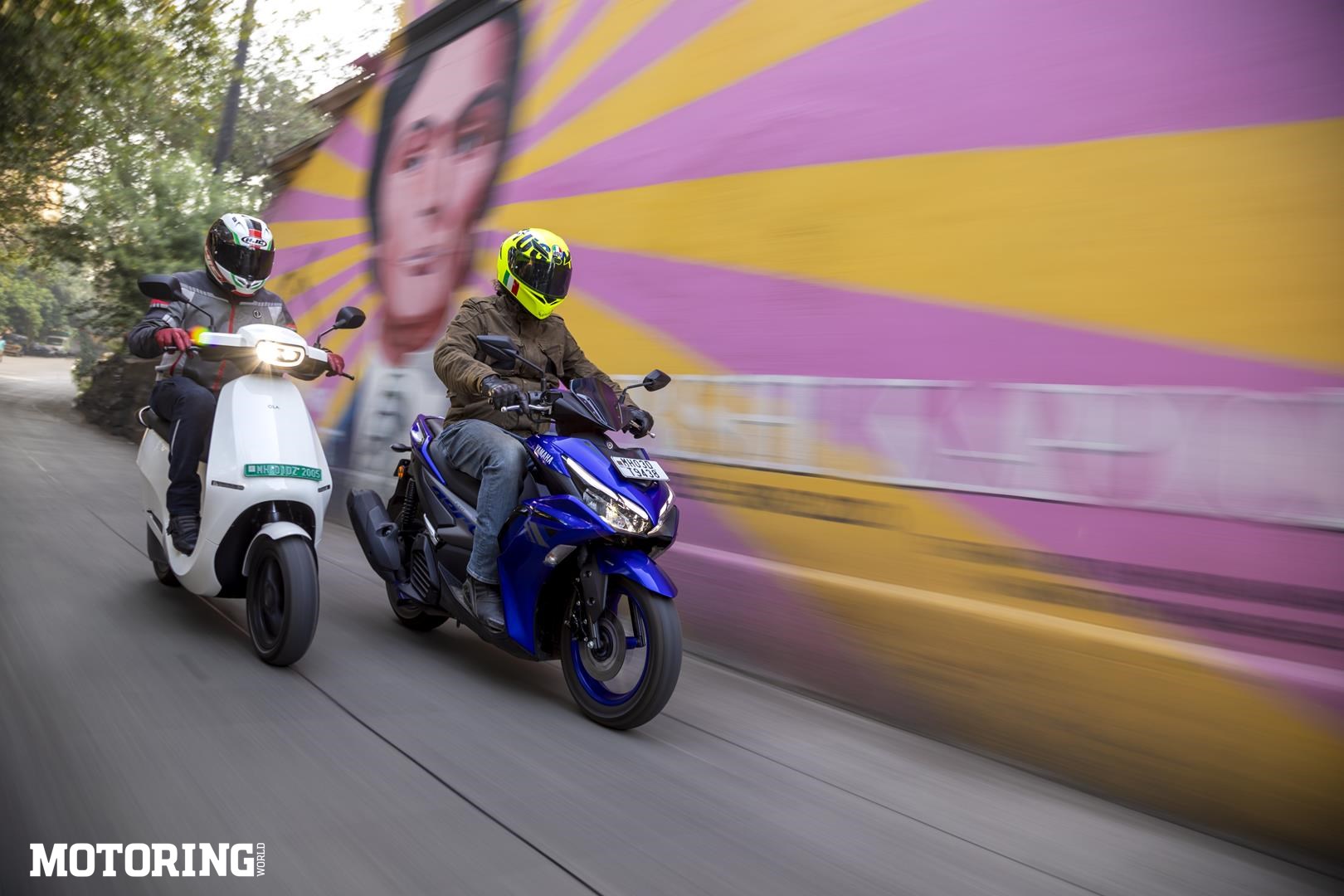 Leading the formation for this opening shot is the Yamaha Aerox, a scooter that will impress anyone who is even half a Yamaha fan. It’s sharp, different and really, really quick. And why wouldn’t it be? Its engine is based on the YZF-R15, a class-leading motorcycle that has been around long enough that requires no introduction. Lining up close to the Yamaha is the Ola S1 Pro — an electric scooter that is the newest addition of the electric lot and also arguably the fastest one out there. That said, can there be an even better compliment that I can give these two machines? Both the scooters here are known for their brisk performance that can propel a lightweight rider to breach the 100 kph mark in no time. This only means, in the real world, these two are a few of the fastest scooters that money can buy. A serious comparison, then. 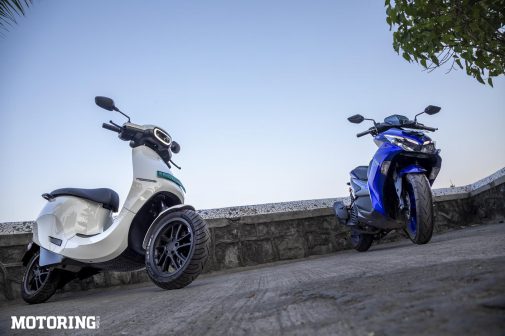 OKAY, BUT WHY THESE TWO?
Yes, I agree they are not straightforward rivals. But, there is more than what meets the eye here. The Aerox, you see, is a potent fossil-fuelled scooter, while the S1 Pro is an electric one and this, on paper at least, is the major divide between the duo. The Aerox comes from the tuning-fork company with a long legacy with two-wheelers and graced the world with some of the best soul-enchanting machines ever. In that way, the S1 Pro has a lot to prove here as it stands here as the flag bearer as one of the best in the current crop of electric two-wheelers in the market. Should you sense foul play from the Yamaha? Or is the Ola just that good and ready to take the lead? 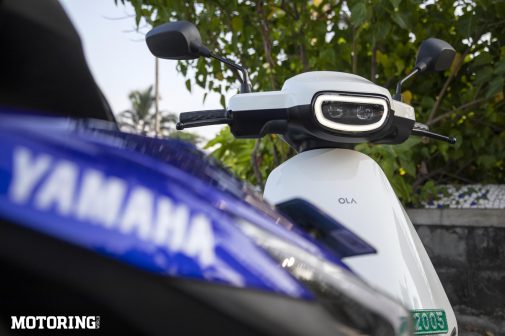 RAMP WALK
Now you must have seen the S1 Pro when we got to ride it for a short period. Even with the limited time and without the usual road surface that two-wheelers spend most of their lives on, the S1 Pro is quite a thing. It’s just about impossible to not give a second look at that uber-cool seamless design. Once you’ve swung a leg through it, it welcomes you with a chime on start-up with the large touchscreen display that lights up. For those who might be wondering, if it is, then yes, it is the biggest display in comparison to any two-wheelers sold in the market. And when it comes to performance, the S1 Pro has the kind of acceleration that can take you by surprise and how. 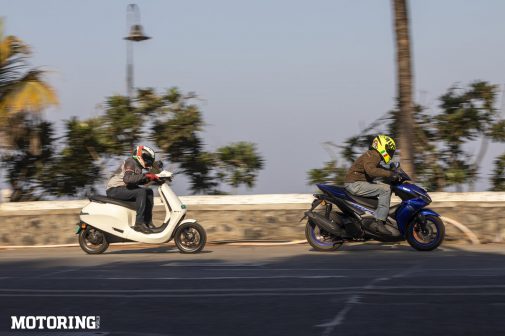 The Aerox, too, has made its presence here, and if you’ve read Kartik’s story you’ll know how much fun it packs. So, much so that we had held the test vehicle back for the longest time, only to return it once it was due for service. It is a scooter that just doesn’t behave like one the moment you start to twist that throttle. And to compliment that is its fresh and striking design that cannot be missed from any angle. The overall character of the Aerox can be associated with that of a Mako shark, streamlined with a spear-head design that allows it to slice through the air, in this case, creating minimal drag. And like the shark, the Aerox is also an apex predator of its class. 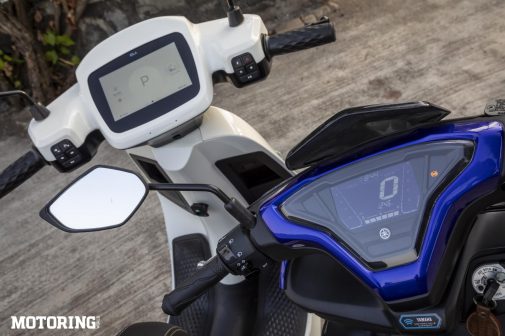 CHOMP AWAY
It’s time to draw those swords. The one where the electric locks horn with the fossil-fueled. Now, we aren’t literally racking up both the scooters at each other to see who chicken’s out first, instead, we do this bit in a more civilised manner and let the numbers do the talking. First up is the Ola. Built around a tubular frame, the S1 Pro is powered by a mid-drive IPM motor that has a rated power output of 5.5 kW, equivalent to 7.3 bhp, and a peak power output of 8.5 kW of peak power which is equivalent to 11.2 bhp. In terms of peak torque, it delivers 5.91 kgm from zero rpm. And to make the best of this, the S1 Pro comes with three riding modes — Normal, Sport and Hyper, that alters the nature of the scooter according to the rider’s preference. 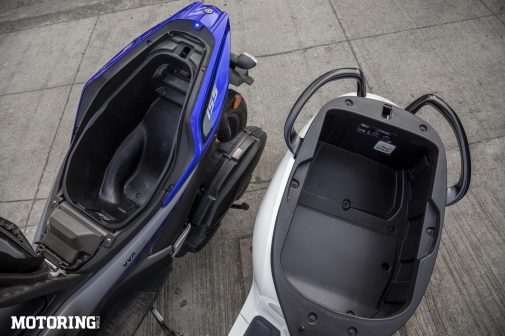 The Aerox, on the other hand, comes with a good-old-fashioned internal combustion engine but with all the modern tech that like electronic fuel injection, VAA (Variable Valve Actuation), liquid-cooling and a bunch of high-quality components. With engine components shared with its supersport sibling, the Aerox packs a strong punch when it comes to power figures. The max power output stands at 14.8 bhp and a peak torque figure of 1.4 kgm, both the highest in its class. On comparing the above numbers, theoretically, it doesn’t take much to realise that Aerox clearly has more oomph here while the Ola is healthy on the torque bank. Also, both scooters only have a difference of a kilogram in their kerb weight, the Ola being the lighter here, which should also contribute to better performance. 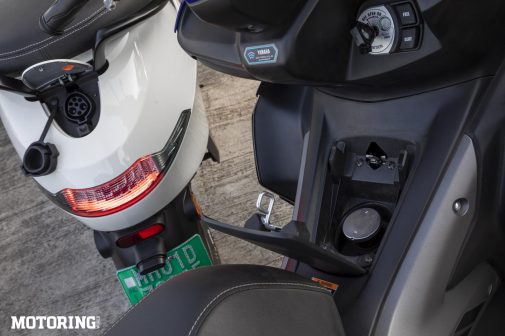 NEED FOR SPEED
But machines like these are meant to be ridden. Hence, the numbers on the spec sheet can never do justice to how good a vehicle feels while in motion, balanced on its two wheels. Out in the real world, the Ola is a crazy fast scooter amongst its peers, especially in the Hyper mode. The first time I rode it, I had whacked the throttle open in Hyper mode and had almost ended up losing my grip on the handlebar to fall behind. This time, however, I was more prepared for the instantaneous acceleration. Till now, I felt the Ola was the quicker one of the two, but Kartik was adamant that the Aerox was no slouch and will perform better than the S1 Pro. 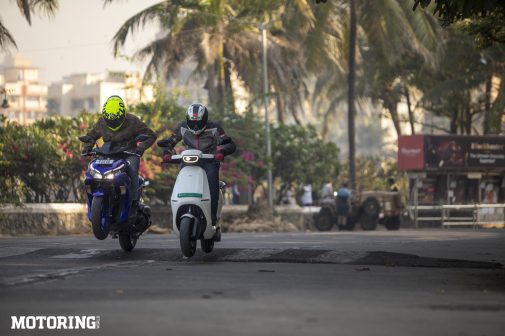 There was only one way to settle this, a drag race, which is what we exactly did. Me, on the Ola and Kartik on the Yamaha, both lined up the front wheels of our scooters. Two clicks on the mode button of the S1 Pro and I was now in Hyper mode, while all Kartik did was hold the gas a little and keep the front brake engaged. A quick countdown honk and we were off on the third. Since I was on the Ola, all I had to do was twist my right wrist and prove Kartik wrong. And I did do so, but only for the first three seconds. The torque delivery from standstill does make the Ola first off the line, but the Aerox’s CVT is more performance-tuned and hence doesn’t take much time to catch up on the electric. By the fifth-sixth second, Kartik was already ahead of me, and before I could use my weight to my benefit to catch up, the open stretch of road was over and anchors had to be applied. 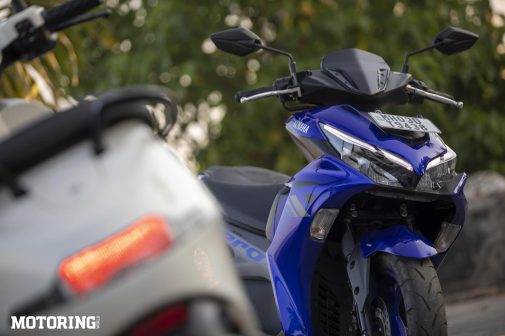 To keep things fair, we swapped machines and did a second run. This time, with my weight benefit, not only was I almost adjacent to the Ola at the start but also ahead of it in a shorter time. The Ola is definitely quick off the line, and it feels more due to the silence of any powertrain noise. But, the lead is only momentary as the Aerox’s torque curve is spread across a wider band which makes it the quicker one here. 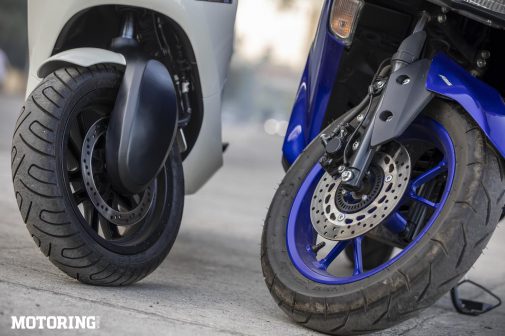 TURN IT UP
Now, we all know two-wheelers are no fun if they can’t corner. Going fast is great but it isn’t as gratifying as attacking a corner fast with aggressive lean angles. And in the case of these scooters, the showdown only gets fierce. Between the Yamaha and the Ola, it is the former that has the upper hand, on paper at least. The Ola features a single shock at the front and a monoshock at the rear and rides on 12-inch wheels. The Yamaha gets a conventional telescopic fork setup and dual shock absorbers at the rear. Where it excels is with the wheel size, which are 14-inch ones that make a world of a difference around corners. There is an immediate boost of confidence while cornering and also on applying the brakes. The bigger wheels accompanied by the sticky IRC tyres makes the Aerox a treat to attack corners. 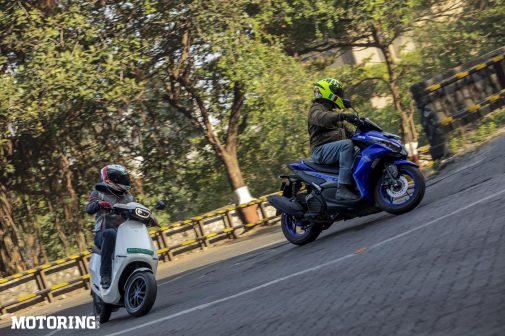 The same prevails when filtering through traffic as the Aerox simply glides through while ironing most of the potholes that come to its path. The only aspect where the Ola scores points are for the more pliable suspension setup in comparison to the stiff setup on the Yamaha. While the former leans more towards comfort, the latter highlights the sporty nature of the brand. 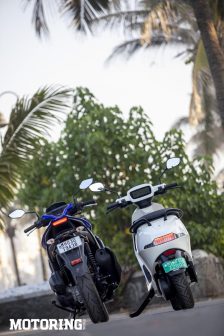 WHO DARES, WINS!
In the end, when it comes to comparisons, in this case, the lead goes to the Yamaha Aerox. The scooter is premium, fast, striking and has the true essence of fun that Yamahas are popular for. In the case of the Ola, the S1 Pro is a potent machine too, but more of a straight line performer which is silently rewarding. The ability to zoom ahead with such brisk acceleration in silence has a different kind of fun involved. And if you felt that it isn’t enough, the S1 Pro is tech-loaded which makes it an interesting experience to browse through the OS and tinker with the features when others are bluntly looking at others or waiting for that light to turn green at a signal. In this shootout, the Aerox may have bagged the win but it wasn’t by a huge gap which means that electrics aren’t that far behind either. Only time will tell where this rivalry leads to in the near future. But till then, scooters like the Aerox are here to rule.