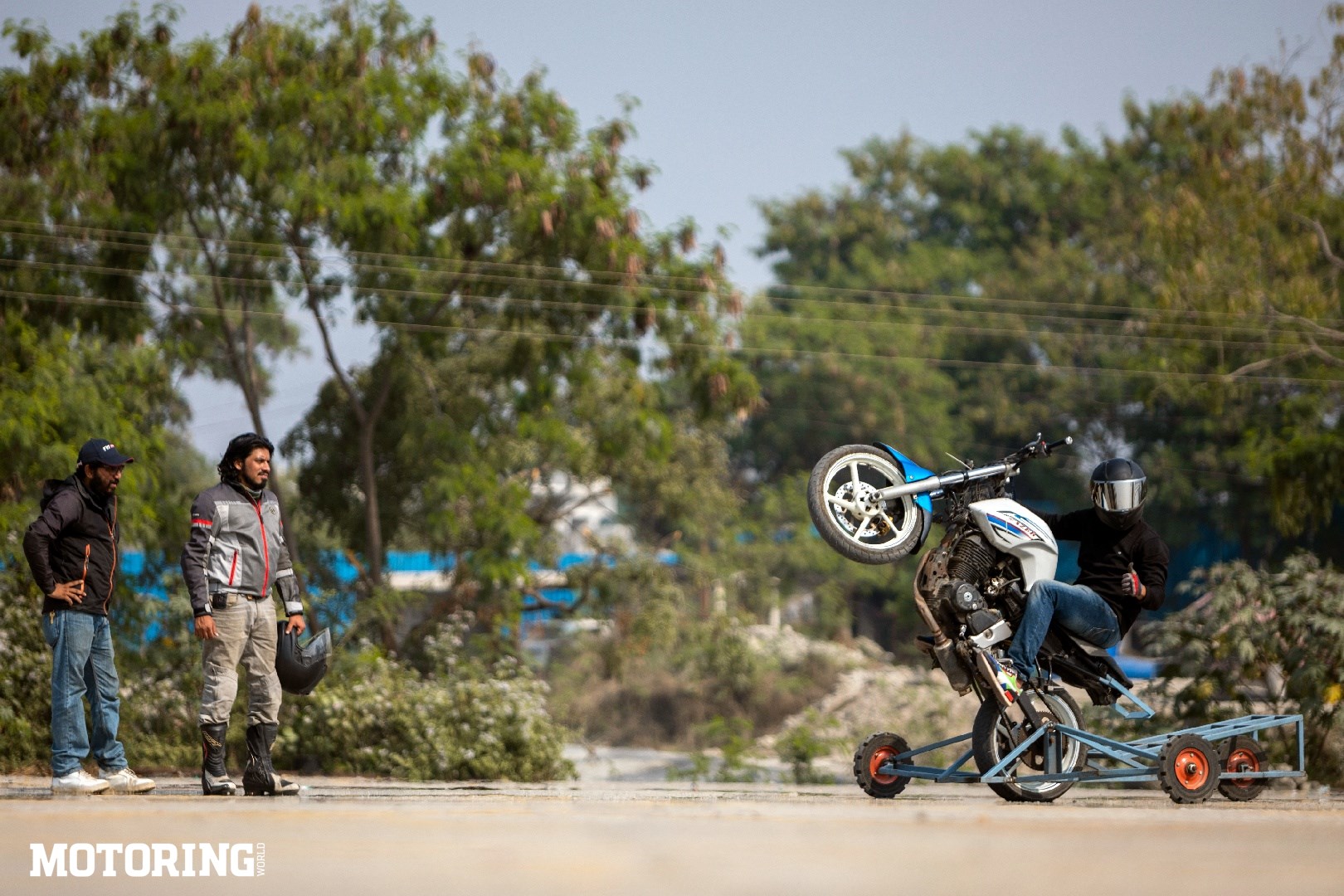 ‘I need you to lean back when the front comes up, that’s the only way you will achieve full height the correct way.’ Those words of advice from Hrishikesh Mandke were becoming hard to trust — and implement. That’s because falling backwards with the bike landing on you is one of the many things that can go wrong when you’re trying to pop a wheelie. Overcoming this fear was my biggest challenge, but it was also the reason that I was here.

Being in the field of automotive journalism, I have been blessed to experience speed — the kind of speed that blurs everything around you, and jolts you with bursts of adrenaline acting like a drug. It is something that I enjoy even today, but the itch to get a kick out of something else has also been building up. Wheelies are any avid motorcyclist’s dream, and this dream only gets stronger the more time you spend riding bikes. Since childhood, I have seen Valentino Rossi pop spectacular wheelies during the races he won. That spectacle of riding a motorcycle on one wheel never gets old and, in my opinion, is one the best ways to express your love for your bike. 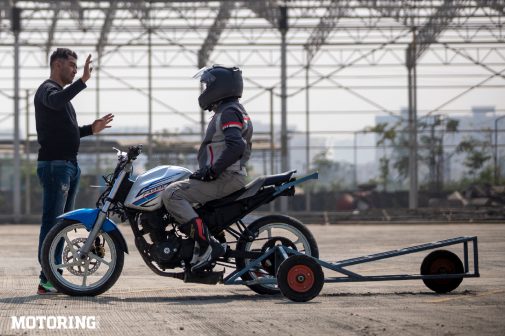 The catch is that it isn’t easy to pop a wheelie, and they can be dangerous unless you know what you’re doing. It’s not that I have never pulled off one. My first unintentional one was on a Yamaha MT-09, which had left me gasping for air and a change of pants, as I wasn’t expecting any of it. Over the years, I did manage a few more, but I could never shake off the fear of making a big mistake that would hurt me and the bike.

One way to overcome this fear is to sign up for a wheelie training course, where you can learn to get that front wheel up and continue riding around without falling. That’s exactly what I did, at WheelieMachine_Moto. Sounds like a win-win situation, no? Now, before I walk you through how to pop a wheelie, you need to accomplish one thing first — which is to clear your mind, just like how Morpheus asks Neo to do so in The Matrix. You need to tell yourself that you are not going to fall if anything goes wrong, because the bike is fixed on a rig, which prevents it from tipping to the sides and also from going over when that front comes up.

Once you’ve achieved that, everything starts becoming a lot easier. In case you have never tried popping a wheelie, you need to time three things in the correct sequence — the clutch, throttle and the rear brake. The clutch initiates the point when you want to send the engine’s torque to the rear wheel, the throttle is to deliver and keep feeding that torque and the rear brake is to keep everything under control; it’s your best buddy when popping a wheelie.

To get that front end up, you need to engage first gear, hold the revs and, while applying a little pressure on the rear brake, pull the bike up with your shoulders while simultaneously dumping the clutch. Once the front does lift, the task is to try and balance the bike and yourself on the rear wheel. Since you as the rider are a movable mass on the bike, you need to lean back a bit (the most daunting part) to counterbalance the bike’s heavy front end. That’s it; it is that simple, really, but it requires a whole lot of practice.

This is exactly where the rig comes into the picture. Once attached to the bike, it only allows vertical movement, with no lateral motion that could put you off balance. Besides that, if you lean too far back or twist the throttle a little extra, there’s a limiter at the back of the tail that prevents any further backwards movement after a set angle. These safety nets leave you to concentrate only on the important part — to get that front wheel pointing skyward.

Once that’s accomplished, the next step is to modulate the clutch, throttle and rear brake to keep your weight balanced on the rear wheel. For me, getting this balance proved to be the most challenging part, as I had to modulate the three controls while being in a position that I wasn’t comfortable in yet. The trick here is to tap the rear brake when the tail touches the angular limit, but then quickly open the gas a bit to not let that front end dive downwards. Once I started to get the hang of it, Hrishi asked me to start upshifting to a high gear while wheelie-ing. This task requires some lightning-fast clutch and gear change action, but as soon as I shifted to second, the torquey nature of the first gear was reduced, which made it easier to modulate the throttle. 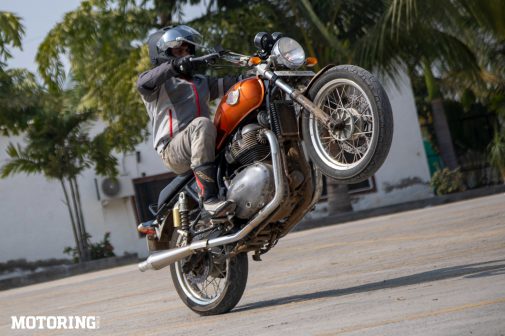 The last chapter in the wheelie book was to pull one without the help of the rig. The only bike available there at that point was our shutterbug’s RE Interceptor 650. I was a little nervous for sure, but it was also the moment of truth that would show whether all that learning had fallen in the correct places or not. After a few attempts, the money shot you see here sealed it for me.

The risks involved in learning to wheelie without a rig are rather high. It requires you to be watchful of other concerns, like losing your balance and falling on one side to landing on your back with the bike riding you instead. Fortunately, a school like WheelieMachine_Moto, run by Hrishikesh Mandke — who has 10 years of experience in doing many more things on bikes apart from just wheelies — is around to help you in just this regard. Schools like these are only the start of being able to perform a wheelie, because what follows the learning is an exhaustive level of practice and determination to get it right every time. That said, I now know what I am going to be doing on my Apache RTR 200 back home.

If you want to learn how to wheelie a motorcycle, do not go by what I’ve explained in the story — reach out to Hrishikesh Mandke instead on Instagram @hrishimandke or on +91 9767970144. May the wheelie force be with you.