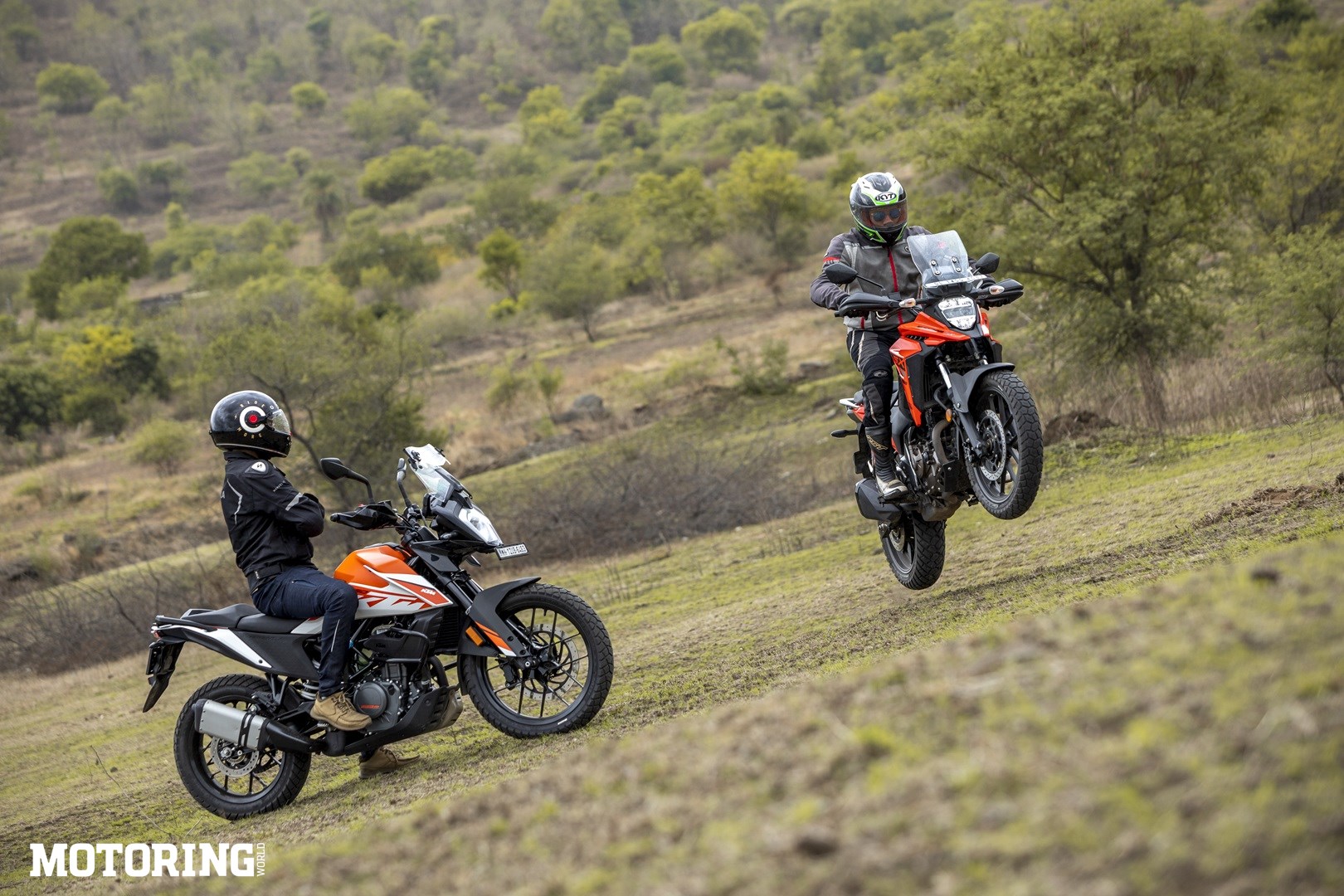 In a world where motorcycles are getting larger and faster, and roads are getting more and more congested, I feel 250cc bikes are ideal machines for a country like India. They’ve got enough power to get you going at a fair clip, they don’t bother trying to kill you in first gear, and are small and nimble enough for daily use. When it comes to that, the two bikes here, the Suzuki V-Strom SX and the KTM 250 Adventure hit the sweet spot. Both are relatively affordable, while one has been around for a while, the other is the newbie in the adventure arena but has a slightly different focus in purpose. 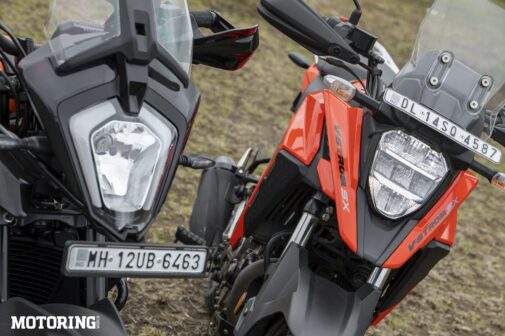 Let’s start with the V-Strom SX, then. The motorcycle has its underpinning based on Gixxer 250, which itself is a fantastic motorcycle by itself. Suzuki has used their streetbike as a platform to build an urban-focused adventure bike that can take on mild off-roading. I sure was super amped after getting to know that the bike was to be called the V-Strom. Unfortunately, that wasn’t the case. Suzuki feels the soft off-roader makes more sense as the majority of the riding is likely to happen on the tarmac with occasional off-roading or none at all. Can’t deny that logic as well, since many buyers in the market buy adventure bikes for their presence and rugged look and never take it off-road. That said, speaking of the V-Strom SX’s powertrain, the mill is superbly refined and packs a healthy dose of power to breach the triple-digit space or climb steep roads without breaking a sweat. The powerband is spread evenly. It revs build in a linear fashion, letting you enjoy each gear as it builds speed. 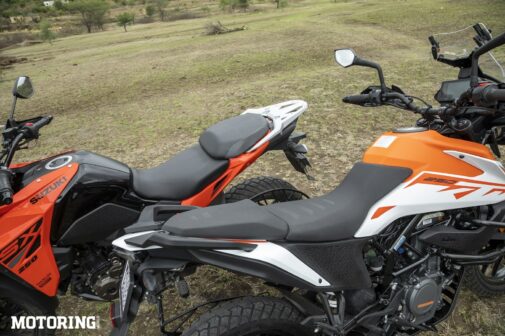 Overtakes don’t require you to work as hard, a cog down is enough to handle most of them. The brakes are very good, and the suspension works wonders to iron out the undulations delivering a plush ride quality. It might not be as agile as the KTM when it comes to quick direction changes, but other than that it inspires a ridiculous amount of confidence. At the same time, when you aren’t pushing it hard, it feels comfortable and unstressed cruising along at 100-110 kph all day long, which is perfect sync for the rider and the machine. I can honestly find very little to fault with the V-Strom, and that’s saying something about the machine. 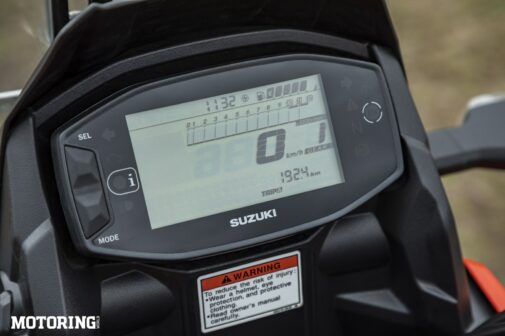 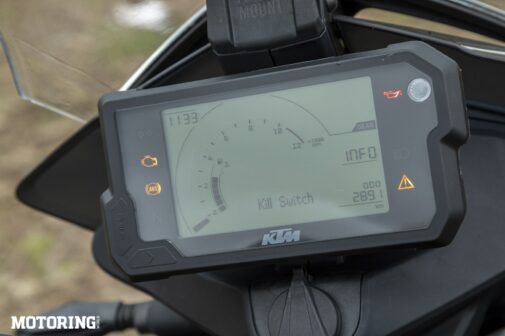 The KTM 250 Adventure, on the other hand, in a simple and sweet sense is the watered-down version of the 390 Adventure. Barring the headlamp and stickering, the bike looks identical and also sounds close to its brawner cousin. 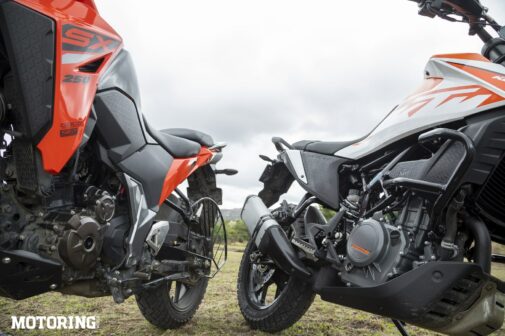 Like the V-Strom SX, this one too gets a full digital display which is easy to read and well-spaced out. Other than that, the 250 Adventure might tip the scale a bit on the higher side but it compensates for it with the little extra power and torque. 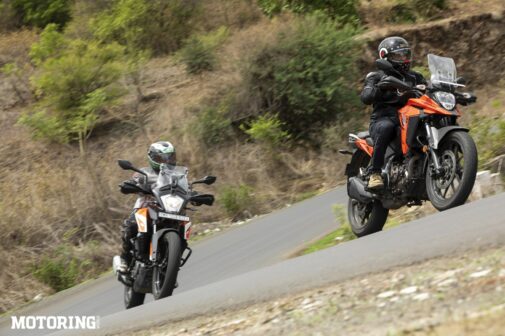 Compared to the 390, the 250 feels and rides a lot more composed which makes it a lot more livable on an everyday basis. The smooth nature makes it less jerky at lower revs but as with most KTMs, requires frequent gear shifts. The suspension setup is slightly on the stiffer side compared to the V-Strom, but it is also the stiffness that makes the motorcycle more agile on the tarmac and around corners. The KTM has a slightly larger seat in comparison to the Suzuki but is also harder which can take a while to get used to. The 250 Adventure was introduced to introduce adventure-seeking riders to the KTM world at the early stage with a more approachable motorcycle. But don’t mistake it for being docile, though. It is still a KTM, and will still create havoc if you ride it hard enough. 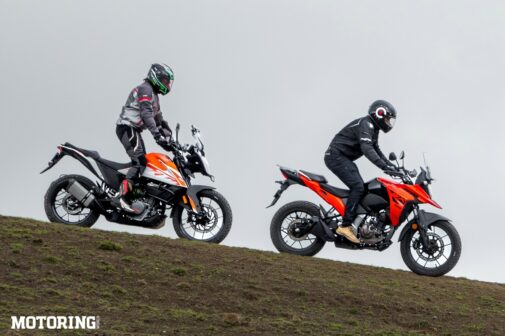 The way I see it, both bikes are present in the adventure space but have a different focus. The KTMs perspective is of a bike that you can take off-roading and have fun and at the same time also commute to the office and back without breaking your back or looking totally out of place. As for the Suzuki, the focus is more on tarmac use, where the bike will be spending most of its life. Off-roading has been given a backseat, as it will not be that frequent and will largely constitute B-roads or broken tarmac. Unfortunately, that has had different effects on the two vehicles you see here. Maturity has solidified the V-Strom’s ability as an urban motorcycle first, and an adventure bike later. It is comfortable, fast and confident. It is something I can see myself spending entire days on. Honestly, I can see myself hooning it around quite a bit, too, that’s how impressive it is now. The 250 Adventure? Well, even in its current avatar, it is still the wilder one of the two. It handles better, and if push comes to shove, still a lot more fun. 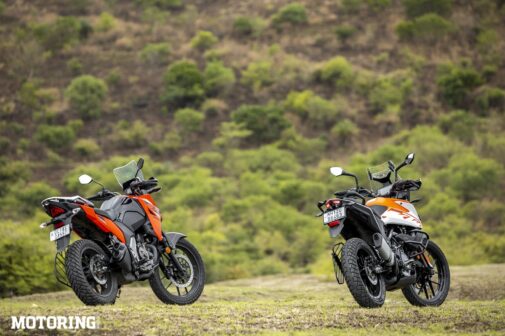 To sum up, both bikes, although closely priced, cater to different types of adventure-seeking motorcyclists. Both are fantastic in terms of looks, are built using good quality materials, pack a powerful powertrain and are equipped with good quality cycle parts (the KTM more). While I really would have liked the V-Strom SX to have some more elements of the actual V-Strom, the 250 is a good motorcycle to ride from every angle. The KTM is for those who share the same character as that of the motorcycle, having a more adventurous approach towards life. Whichever motorcycle you choose to go ahead with, both are excellent machines that deliver the best of what they have been designed for. In the end, it boils down to the matter of choice, which we somehow already know right from the beginning.