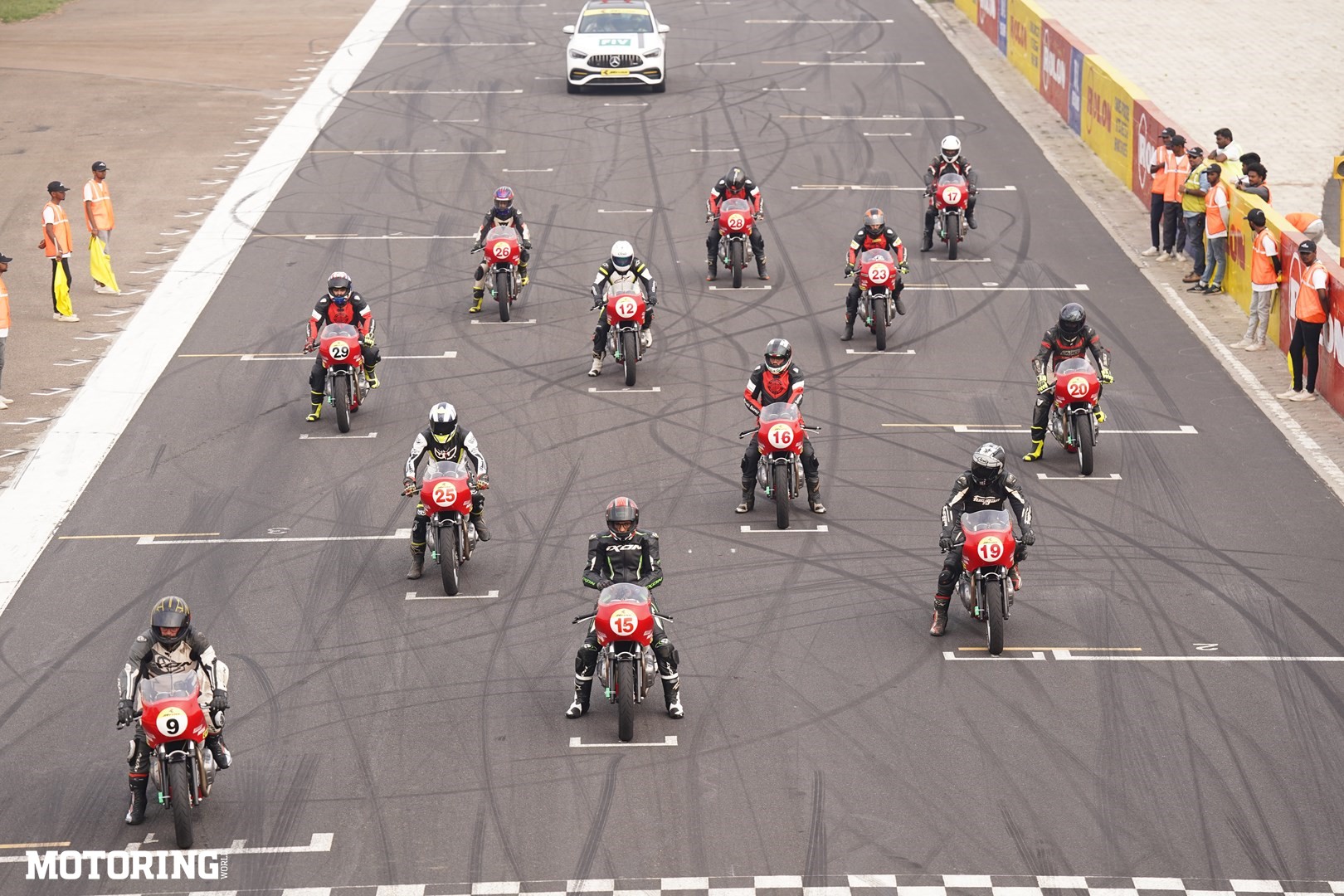 It has been four years since the last time I competed in a race. It might not sound like much, but back then, I was still in my twenties, had the strong desire to clock the fastest possible lap time every time I was at a racetrack, egging to push myself to the limit with the awareness of falling in the process, and a whole lot slimmer. And I received a reality check, as unfiltered as it could be when RE had invited a bunch of journos for the inaugural round of the second season of the Continental GT Cup at the Kari Motor Speedway. The experience was to ride the race-spec GT-R650s for merely five laps, but it was enough to smack me in the face with an unsympathetic realisation of how unfit and sloppy I had become. 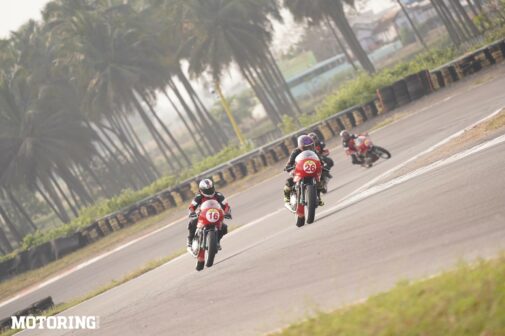 This was two months back, and we were informed a media race would be held, during the season finale weekend. Taking it as an opportunity, I realised it was my first step to getting back in shape and becoming fitter. With consistency being the key, I managed to shed a decent amount of weight so that I could fit in a size 50 race suit, instead of a size 54. That feeling itself was a big motivator to feel healthier, physically and mentally. Riding on that good feeling, I felt that there are very few reasons that I thought I could give about my weaknesses when at a racetrack, as compared to street riding. It is a closed circuit, the layout is defined, and so are the corners. So, depending on one’s capabilities and knowing the machine’s limit, every racer has an equal opportunity to trace the fastest line out through a corner and eventually clock the fastest lap time possible.

Unlike the last time, when I was racing with actual racers in the open category, this was a media race, so the grid was composed of journos of varying skill sets, and ages. Some were young and pumped up to race and wanted to prove a point, some were experienced and present only to have fun, and then a few like me, who had a battle to fight with one’s self besides the race. The weekend consisted of one practice session of 10 minutes, followed by qualifying for another 10 minutes to set our fastest lap.

The practice involved getting accustomed to the motorcycle and its character while at the same time, also placing the markers for braking and steering at the corners. With the limited available time, there was a lot to be understood and processed to get anywhere close to the ideal racing line. Also, the GT-R650 is a lightened race-specced version of the Continental GT650 that Royal Enfield sells for the streets. It is a retro-styled old-school motorcycle with modern equipment. So, although the bike had been designed and manufactured in the 21st century, its character and dynamics hark back to a time when such race bikes were commonplace.

What I am referring to here is a 190-kg race bike with a retro-styled half-bubble fairing, adjustable suspension, better brake components, semi-slick tyres, and a few more modifications. In a nutshell, you are in for a date with a heavyweight champion of a motorcycle, and it’s up to you whether you wish to dance, or wrestle with it. The wise thing was to try and accomplish dancing with it, although I was only just in shape and fit for it.

The practice session was a bit of a hair-raising outing as I messed up my corners a couple of times, unsettling the motorcycle and increasing my chances of causing harm to myself and the motorcycle. Thankfully, none of that happened as I completed the qualifying session, carrying confidence and commitment through the corners, which landed me in fifth place on the grid for the race. Not bad for a grid of 13 journos, especially when I was faster than the other younger, and lighter, riders present.

Sunday means race day. The professional racers had completed their last race for the season, which meant we now had the competition bikes to ourselves for our race. However, having practised and qualified on the spare bikes that had fresh tyres, the competition bikes were to be raced as is, that is, with all the abuse and wear that they had already been subjected to, the tyres, particularly. To give an idea, these tyres had already been, almost literally, put through the mill by having been used by one practice and one qualifying session, and two races. And since it was the season finale, every racer had only one motto, go all out over the weekend.

Not much could be done about it though, as we all drew chits for the bike allotted. It was bike number 16 for me. The race bike had suffered a few dents on either side of the fuel tank from previous crashes, but that was the least of my concerns, because there still was life left in the tyres. Soon, we all were suited and out on the track, aligning on the grid at our earned positions during qualifying, waiting for the red lights to go off. Within the next few seconds, they did, and we were racing! 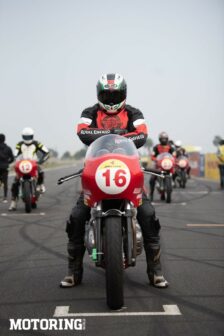 I didn’t have the best of starts, but as the bunch approached the chicane, I passed BikeWale’s Vikrant from the left, earning me a position and the advantage of the racing line for the next set of corners. As the leading bunch approached the backside of the track, Jehan from ZigWheels went off the track as his left clip-on had come loose, thus advancing me to the third position. However, the state of joy on being in podium position was short-lived, as the race was red-flagged as two riders collided with each other in the opening lap. 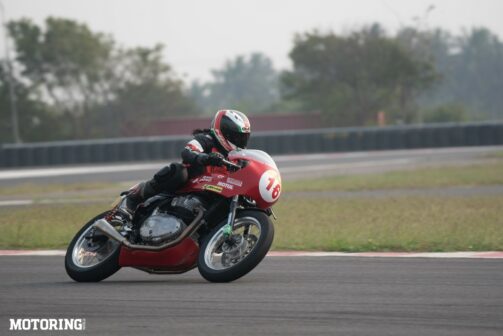 The race was restarted, and since we hadn’t completed a lap before the red flags came out, we had to start in the same positions that we had qualified for. This time around, I had a much better start. I managed to climb up two spots to the third position in the first section of the track. Jehan, who had dropped from first to fourth, was right only my tail for the first half of the opening lap and got past me as we got on the back straight. In the next few corners, Vikrant caught up with me and made a pass in the last corner of the same lap. Despite being an old broke, weighing in his experience and fitness level, he managed to pull ahead, landing me back in the fifth position. In the next seven laps of the race, I spent battling with myself, pushing my fitness and stamina to the maximum, while also keeping up with the bunch from one corner to the next. By the last lap, I was knackered, all the more because of how physically demanding the GT-R650 was. But, despite the odds, I continued to keep pushing till I crossed the chequered flag.

In hindsight, the results may have been less than appealing, but I think I got what I wanted out of this experience. Fitness is an important factor, and it makes a huge impact in racing or any other activity, for that matter. It helps set up a healthier state of mind in achieving that target. What also goes hand-in-hand with it, is the determination to change, and the need for healthy competition around you.

It is something that we all are capable of, no matter what the odds may be. That said, as far as my experience racing on the Royal Enfield Continental GT-R650 Cup bike goes, I have managed to come through as a better version of myself, physically and mentally, and the determination to be even more for the next race.