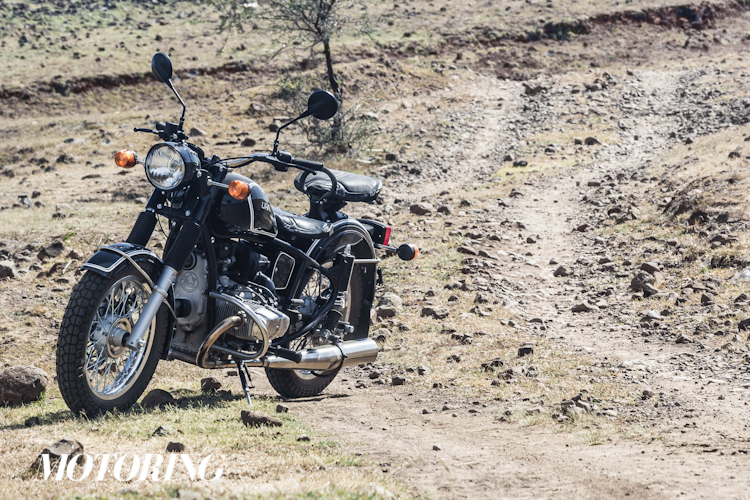 Imagine a machine created for war. A fearsome mechanical creature designed to strike terror in the enemy’s heart, bulldozing its way through hostile forces, leading its wielder to victory. Man’s dependence on war-machines has given us some great vehicles; some astounding ones that befit the description given above, others more… grandfatherly. Like the Ural Retro Solo. During WWII, a German disguised as a Russian was destined to pose haplessly before a shooting squad, but the Ural somehow managed to dodge all bullets and survives to  this day.

Nothing built for the Red Army using Nazi German technology might be considered to have anything to do with peace. And for the beginning of its life, the Ural indeed didn’t; after all, Joseph Stalin okayed its production. Reverse-engineered from the late-1930s BMW R71 during a short-lived non-aggression pact between Germany and Russia, the Ural M-72 was a warhorse on which Russian soldiers rode into battle. They commonly had machine guns mounted on sidecars, though today they’re likely to carry ageing housewives with a yearning for adventure. Within enforced speed limits,  of course.

Ural, or IMZ-Ural, to give you the company’s full name, still makes these motorcycles in Russia, with tweaks of modernity that have crept in over the decades. Reminds me of our own Royal Enfield’s story, it does. ‘IMZ’ stands for ‘Irbitskiy Mototsikletniy Zavod’, yet another Russian phrase the meaning of which the rest of the world can only hazard a guess at. The ‘Ural’ part, however, is much simpler to explain; it’s because of the factory’s proximity to the Ural mountains. The factory was relocated from Moscow to the town of Irbit back in the lively time we know as WWII to move it out of the German planes’ bombing range. I wonder how heartless they’d have to be to want to wipe such a lovely bike out of existence.

Time pauses and leaps back a few decades with a single look at the Ural. It might as well be in the ‘Long Time No See’ section of this magazine. Sure, it has disc brakes and electronic fuel injection, but I think I’d find myself riding it to a museum for maintenance and repairs, not to a modern workshop. This particular model, called the Retro Solo, is probably the best-looking one in Ural’s range of cosmetically differentiated variants. It doesn’t not come with the sidecar that Ural is synonymous with, but that’s just as well. I, for one, don’t have any interest in riding around with a wheeled coffin attached to a motorcycle. And the absence of a sidecar also leaves the bike to complete visual enjoyment.

As far being an ancient BMW’s clone goes, Ural has got it spot-on… well, mainly because they haven’t changed much. I mean, even the white pinstriping on the black paint has me seeing flying propellers all around the bike. An effortless charm flows through the Ural’s old-world lines, as real as the sense of solidity it exudes. This bike is built to last, no mistaking that. The boxer twin sits between two wheels flung far apart, with a substantial frame holding it all together. The grips and levers are a bit out of place, but if it’s character you’re looking for, you’ll find the Ural positively wallowing in it. Much like it does on the road.

It’s commendable how Ural has managed to take a conventional telescopic fork by Marzocchi and make it feel like a leading-link system. I suppose they wanted to retain that ‘ye olde’ feel… or whatever ‘ye olde’ means in Russian. The net result of the long wheelbase and boingy suspension is that the Ural doesn’t believe in corners. It doesn’t believe much in straights, either. Anything over 100 kph and the Ural starts feeling like a two-wheeled waterbed. That doesn’t do much for putting you at ease.

The Ural’s motor is much like the promised calm before a storm — it’s just that the storm never comes. An underwhelming 40 bhp pushing an overwhelming 246 kg through a 4-speed gearbox tends to have that effect, I suppose. Fast gearshifts are open-armed invitations for false neutrals; if you’re lucky to get through the ‘box without any delays, strangling the throttle for all its worth has the speedometer needle taking wild stabs at the ‘160’ mark. However, I suspect it’s an exercise in unbridled optimism, especially when Ural itself approximates a 130-kph top speed for this bike. Sigh. So far, no good. But you know what? I’m hooked nonetheless. Because the Ural isn’t the latest and greatest but a two-wheeled pause in time. One that still excels at what it was designed to do.

Maybe it’s the fact that Ural hasn’t done much to this bike since they started making it. Maybe they went out of their way to preserve the old-world charm of the bike. I don’t know which is true, but it sure does work. The 745cc boxer twin might be low on outright power, but it delivers instantaneous and refined torque. It burbles its way over distances with a lazy and deep Russian drawl that is instantly likeable. There’s also a tank-mounted party trick called the reverse gear that can be the source of endless backward tales for your grandchildren as well as reverse burnouts. I didn’t try any of the latter, though.

However, the Ural’s biggest strength is that it’s a formidable terrain-trampler. One that you immediately want to ride across the biggest wastelands available. The soft suspension and fat tyres make short work of everything in their path and I don’t feel a thing even though I’m bouncing in the springed saddle. It’s up for flying over broken stretches as fast as I dare. The long wheelbase keeps it as planted as an oak, while the low centre of gravity makes the Ural improbably flickable. It’s a bike that is more fun off the beaten path than on one that’s been beaten silly. Perhaps that’s why we see a fair number of these bikes going around the world, sidecars carrying luggage and all. The war was over a long time ago, but the Ural still wants to conquer all that it can. And it’ll do it peacefully, too.

I suppose I fell for this bike’s most abstract yet most tangible attribute; the Ural has a sense of unconcerned detachment and tranquility to it that I imagine does justice to the mountain range it’s named after. And you don’t get that with other pseudo-lifestyle, marketing-spiel bikes. They are good bikes, no doubt, but they don’t have an antiquated allure as profound as the Ural’s. Anyone who thinks they don’t make them like they used to, the Ural proves them wrong. It’s an embodiment of two-wheeled irony that seeks adventure that calms, its effect more philosophical than mechanical. The Ural is a child of a bygone war that delivers peace in our times. Looks like those bloodthirsty Germans and Russians never knew what they were sitting on.