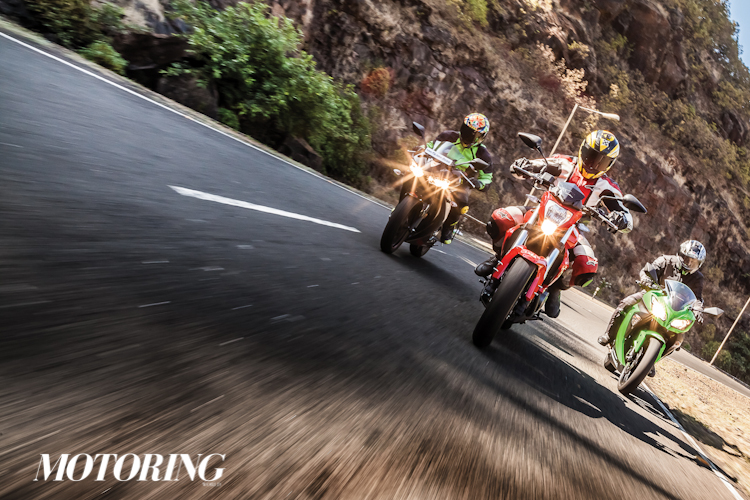 The single-cylinder motor lies at the very heart of motorcycling’s Big Bang. The first-ever motorcycle, the Daimler Reitwagen built in 1885 by Gottlieb Daimler and Wilhelm Maybach, was powered by a single-cylinder motor. And even more than a century later, the single remains the most versatile motorcycling platform for an overwhelming majority of the world. Commuters use it to extract maximum efficiency, while dirt bikes use it to lighten themselves as much as possible. India, having its eye firmly on the former outcome, has always been the land of single-cylinder motorcycles. We hardly had a choice. But now we do.

The KTM singles are a lot of fun, but they aren’t for everyone; their single-minded focus and hard edge keeps many people away. However, if you’re tired of being single (never mind the KTM crowd), twins are a lot of fun. They carry within themselves the feel of greater reciprocating and rotating masses, pleasing sensations that physically manifest themselves as a result of additional engineering. And these three motorcycles are perfectly placed to serve as upgrades into the world of multi-cylinder motorcycles for us Indians, your best options to get more pistons between your legs. Parallely, of course. Two of these are Japanese, while the third holds an Italian passport even though it was born in China.

The oldest of this lot is the Kawasaki Ninja 300, the benchmark of nearly every small-capacity motorcycle for decades around the world. Next up is the Benelli TNT 300, the sonorous motorcycle made by the oldest Italian motorcycle maker that now makes its bikes in China. And finally, we have the Yamaha YZF-R3, the motorcycle that has the Ninja 300 firmly in its sights. Agreed, the TNT 300 is a bit out of place here. However, being a 300cc parallel twin sees it being dragged into the fight. The more, the merrier, right?

Parallel-twin four-strokes, owing to their layout and the way they produce power, are inherently smooth and friendly creatures. I said ‘four-strokes’ in case anyone was about to bring up the Yamaha RD 350. It’s time to let that old one rest in peace. Anyway, these are three motorcycles that don’t bully their riders despite possessing high-revving potentials that can show you extremely illegal speeds on their respective speedometers. They don’t overwhelm you with their personalities, but instead allow you to mesh with theirs to make for fun motorcycling. They all do this, but in very different ways.

The first one up, I suppose, is the one that looks like it doesn’t belong here. The TNT 300, with its upright riding stance, is the most comfortable one of the lot. It’s a handsome-looking motorcycle that shows off all the right parts to its advantage. It’s got the only inverted fork and twin-disc setup at the front in this trio, good-looking engine cases and proportions that feel big without being intimidating. And that theme continues to the riding part, too.

The TNT 300 is an extremely easygoing motorcycle. Its power delivery doesn’t spring any surprises, its suspension comforts the rider and the brakes work well when called upon. Sure, you have to really rev it to get going, but I think that’s because it’s geared more for open European roads where they can use all those revs. We Indians need a bigger sprocket on the rear wheel. As it stands, though, the smooth nature of the motor means that you can let the tachometer needle stay near its limit without feeling uncomfortable. Because there’s a very good reason to do so.

As I never tire of pointing out, the TNT 300 is one of the best-sounding motorcycles I’ve ridden yet, displacement no bar. Revving the TNT to its redline is the best way to ride it. The TNT’s howling music is even more impressive when you hear the other two bikes go whirring and screaming about their business. It makes you wonder why the Japs couldn’t make their parallel twins sound as nice as the Chinese… erm, Italian one’s. Holding third and fourth gear through fast twisties on the Benelli has the soul and speed to make any motorcyclist’s day. So what if you can’t corner too hard on the right because of the underslung exhaust.

However, if you look closely and ride it enough, you cannot escape the fact that quality levels are not quite up to the mark of the Japanese duo. It’s all acceptable, though, given that it’s the cheapest of the lot by far. Oh, and it won’t present you with a big bill for plastics if you drop it.

However, the faired bikes don’t let the naked one interrupt their fight. On a twisty road, these two bang fairings, while the TNT watches from the best seat in the house – firmly behind them. The Ninja and the R3 are motorcycles with sporty ambitions – and the abilities with which to back up those ambitions. The Ninja looks the sharpest, a miniature ZX-10R with the apt family colours. The R3, despite being striking enough on its own, manages to look a couple of generations older. Not that it matters one bit.

The Yamaha has the most power, the lightest weight and the shortest wheelbase of the trio, so you’d expect it to simply run away – and it does. However, numbers don’t give you confidence in a corner, do they? The Ninja has always been a sweet-handling bike. It’s a bit stiffer than the Yamaha, so you feel more of the road through the motorcycle. The bike holds its composure under hard acceleration, harder braking and through corners, too. The slipper clutch, something the other two bikes don’t have, helps to keep the rear wheel in check when going hard into a corner, and on the way out the smooth twin revs freely to its redline. It’s also the most flexible motor around; the Ninja can drop to 35 kph in top gear and still pull away cleanly. It’s good to know that the Kawasaki is still as accomplished and impeccable as ever. Its problem is that the R3 is even better.

Even with the stock MRF tyres holding it back, the R3 delivers handling so easy, it’s stunning. The extra power and lesser weight help the Yamaha trounce the Kawasaki, yes, but the sheer sweetness of the R3 is what seals it. I mean, even the riding position and ride quality on the R3 is great. It feels like a sports-tourer, but more ‘sports’ than ‘tourer’. Its motor clearly has more power everywhere than the other two, which makes for more thrills on the throttle. It brakes hard and clean, settling into extreme lean angles as effortlessly as a feather. A pretty fast feather that flicks from side to side without seemingly any real effort. It’s amazing how much confidence the Yamaha gives you, given the level of motorcycle it is. I think it’ll remind everyone who rides it of the first-gen R15. Finally, a real upgrade.

After spending quality time with these motorcycles, it’s hard not to appreciate what each one does. Each of these is a great everyday ride and will head out to the highway without a second thought. Just don’t take the TNT to the track, though. However, even between the talented Japanese, the Italian impresses. It is the most approachable one of the lot, thanks to its relaxed riding position and lowest price tag. Ridden really hard, it’ll keep up with the Japs and it’s more than happy to do so, too. If you want a multi-purpose parallel-twin motorcycle, you’ll be very happy with the TNT 300.

The Ninja, sharp and flexible, is probably all the motorcycle any of us will ever need. It’s only the want of even more cubes and pistons that makes the Kawasaki a step on your way to bigger motors. Much like where this story began, then. And then there is the R3. It’s the most emphatic proof today that two is indeed better than one.