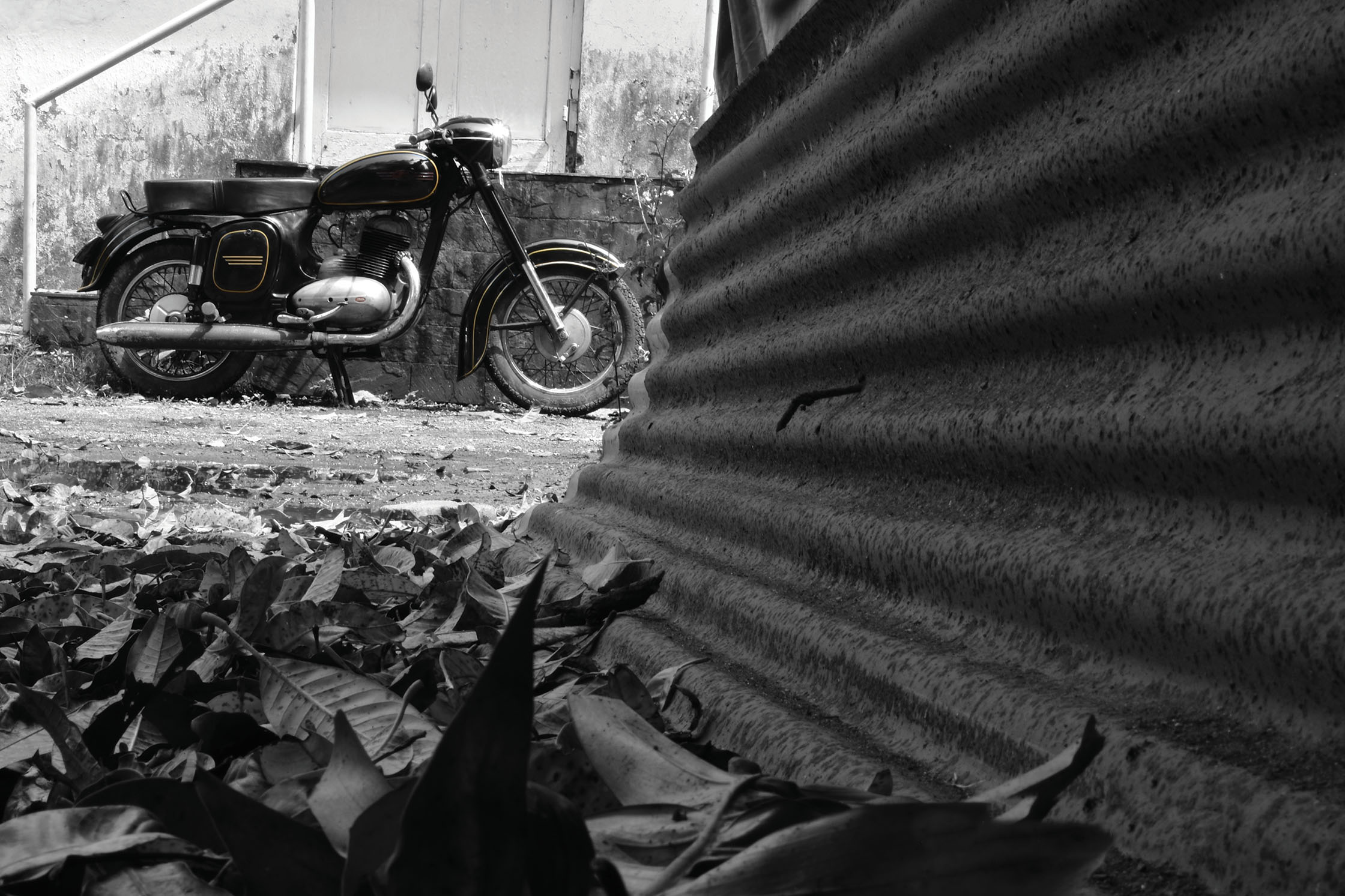 It was 1965 and a young lad, fresh out of college and all set to take on the world, felt the need for a pair of wheels. At the time, the only motorcycles available were British imports and the trio – consisting of the Royal Enfield Bullet, Jawa and the Rajdoot 175 – that were manufactured in India under licence or some sort of collaboration. The foreign metal was stratospherically expensive and the Enfield was not much cheaper, costing about five thousand rupees at the time. The Rajdoot was deemed to be too square – literally and metaphorically speaking – and the plethora of Lambrettas, Lambretta clones, Vespas and Vespa clones weren’t even considered. The Jawa was the logical choice, its lithe manoeuvrability and relatively sprightly performance helped seal the deal. With three thousand rupees in his hand and a song in his heart, he walked into the Army Canteen Stores and rode out on a spanking new Jawa 250 Type 353. Okay, so he had to wait for a fortnight for the delivery of the bike at the CSD canteen after paying for it, but those are minor details that we can do without.

The nature of his work took the young man all across the country. Every time he was far away, his mind would wander right back to his trusted machine, standing pretty draped in its imperial maroon and chrome finery. He yearned to ride it every day, and when he was back in Bombay, as it was called then, the Jawa and him were inseparable. 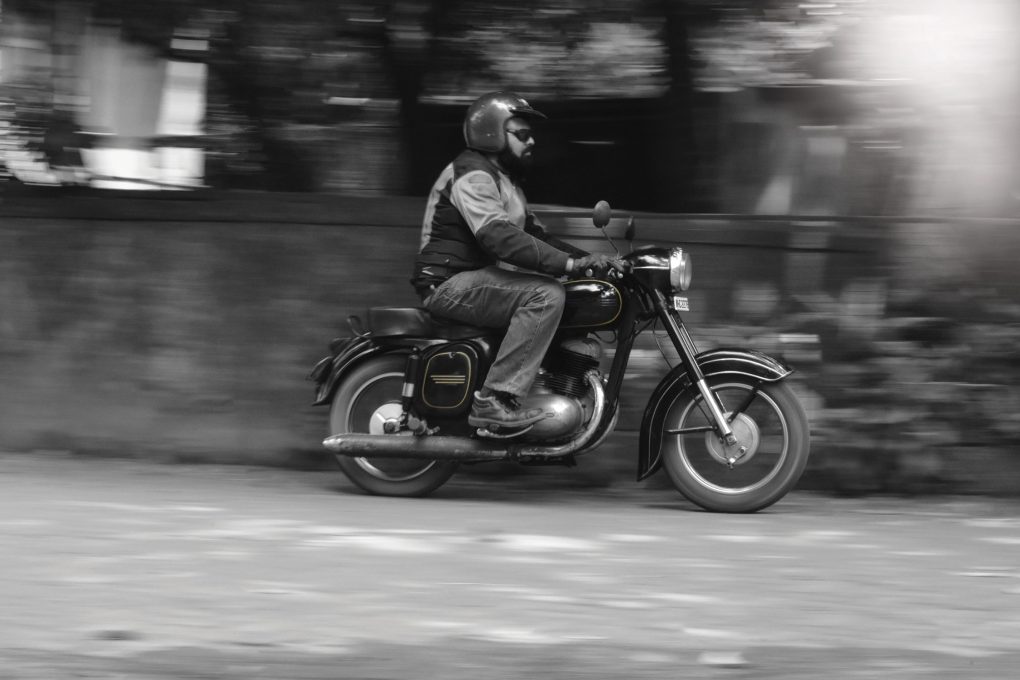 On the sly, the lad and the motorcycle dabbled with some racing at Juhu and such. However, correspondence between the young man and the factory in Czechoslovakia about the import of an aluminium bore and engine performance modifications were discovered by his father, which coupled by the hearsay that he had heard about his son racing bikes behind his back, put the brakes on such sporting pursuits not long after.

In 1970, he met a pretty girl at a dramatics meet. It must have been love at first sight, and they courted and within a couple of years, were engaged to be married. From mid-year jam sessions at Everard Nagar in Sion to Christmas balls at the United Services Club in Colaba, the Jawa ferried this couple everywhere and beyond. But there was the odd stalling here and there, and as the lady now recounts, it was generally the spark plug that needed remedial cleaning with some sandpaper and cloth. Sometimes in the middle of the road. Sometimes in the rain. But nothing a strong relationship couldn’t endure. 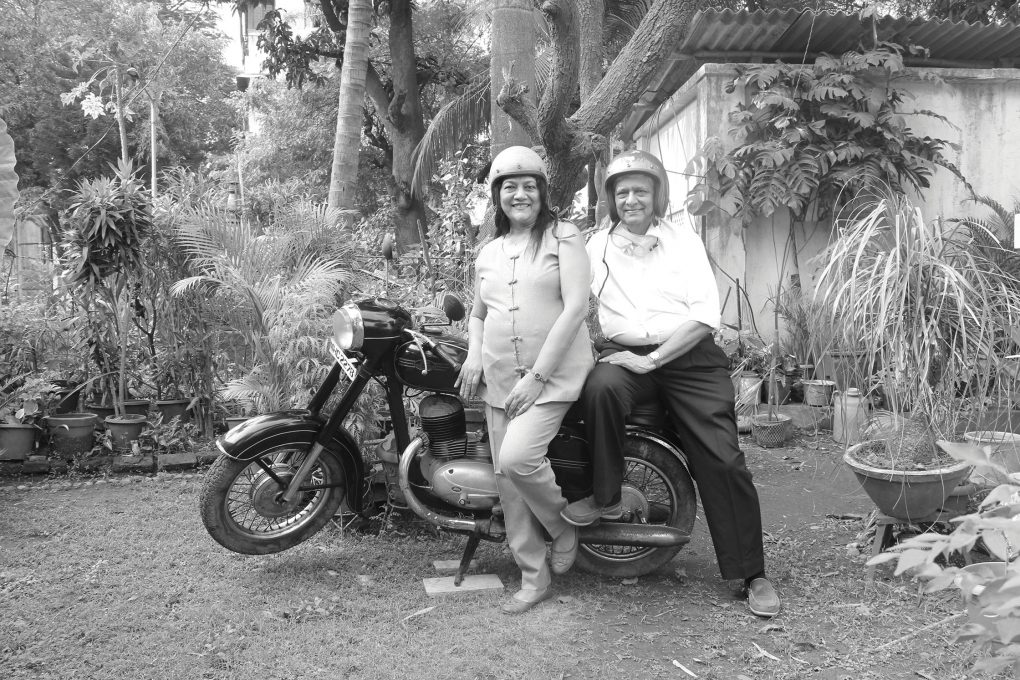 By 1974, the couple had married. And in 1977, they were blessed with a son. By this time, the Jawa had already been repainted once and was now black all over. A small spill had dented the tank and made it ‘unchromable’. The bike up till now was being maintained by a gentle man named Philip who worked with the Jawa authorised workshop called Ideal Motors in the city. He took great care of the machine and finally remedied the perennial clutch dragging issue that apparently plagued the bike since new. We reconnected with Philip a mere year ago but how that happened is worthy of another thousand words at the least and so I’ll keep it for another time. Coming back to the couple; life had progressed and they had another son six years after their first. That son is me. My earliest memories of the bike largely consist of me sitting on the tank, my dad at the bars and my elder brother sitting between mom and him.

By now, my father used to get the bike serviced by this gentleman called Swami because riding it into the city just for maintenance was getting to be a chore. He was a character and how, sometimes walking around his garage in a tweed suit. He was rumoured to have visited Europe and toured through the Jawa factory in Czechoslovakia itself. One must remember all of this was at a time when a trip to Lonavala (a hill station about 100 km from Mumbai) warranted a two-hour long boast to your friends in school. 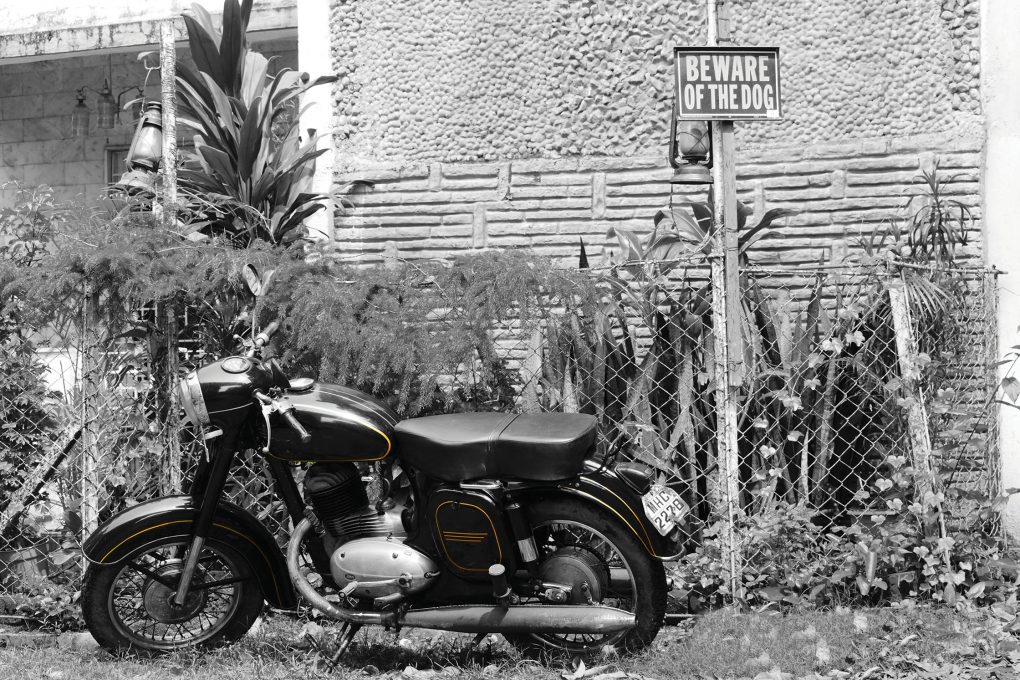 The family had outgrown the Jawa simply because we all couldn’t fit on the bike anymore. Good thing that dad hadn’t seen the PAV mono-wheeled bike trailer then or else the sons would have ridden in that instead of the pista green Premier Padmini – bearing the registration number MMF 1970 – that was bought second hand and repainted a more subdued white before it came home.

The car had taken prominence and the Jawa was reserved largely only for the mad dash to get my brother and myself to school in case we missed the bus.

The bike did fall into disuse for a few years but luckily, my brother turned eighteen and the bike went into his hands. My elder sibling cut his proverbial riding teeth on this bike and that accomplishment had left a mark on the original left hand Bakelite handlebar grip. That gash continues to exist on that very same grip and so does my brother’s denial of the fact that he put the bike on to the ground trying to bump start it down a slope.

Swami was long gone by this time, wiped out by an obsessive affection towards alcohol and gambling apparently. Bhupat, his dad and his brother took over turning wrenches on the bike but this was after a short stint by a sprightly chap called Bengali who worked on the Jawa for a while, a bright beetle nut-stained smile always beaming when he came to pick and drop off the bike.

I was in the sixth grade, all of twelve years old and my feet could barely reach the ground whilst straddled on the bike. I remember my dad allowing me to ride it within the compound as a reward for a good grade or something else as deserving; my father and his neighbourhood friend named Arshad, standing at either end of the compound, waiting to hold the bike when I got close to them for I couldn’t manage the weight of the bike to turn it around.

The first repaint job had seen better days and so dad and Arshad embarked on redoing it themselves. It took more than a month of work, the two of them digging into it after they would get home from their day jobs. The primer was sprayed on with a Baygon flit pump but a compressor was bought to finish off the job. The golden pinstriping was replaced by stickering which was done by the multi-talented Bhupat. This paint job is what still adorns the motorcycle today.

The day I turned eighteen, I went to the RTO to get my learner’s license. A few hours of waiting in line, talking to some people and looking at some officious papers getting stamped, I was handed my learner’s license. I went home, dug through my dad’s tool box and picked up the red electrical insulation tape to emblazon two big ‘L’s on the fore and aft of the motorcycle. I was now free to ride the bike on the road, albeit without a pillion unless and until he or her had a full blown motorcycle license. I didn’t care about any of that, however. All that mattered was that I could now ride into the horizon. Of course as long as it could be reached with ten rupees’ worth of fuel in the tank.

It was then that the bike began to developed a serious aversion to starting up. The original alternator was replaced with a more current Yezdi one and the bike suddenly came alive in a big way. The lights actually lit up some part of the road and I didn’t need to rev the bike up to make the horn somewhat audible. It kind of defeated the purpose of the tooter because the sound of the suddenly Jawa revved engine made offending pedestrians and motorists jump out of the way anyway.

Unlike now when the internet has made sourcing parts way easier and the fact that many people are now producing replica pattern parts, back then, one had to actually network and trawl through dingy shops to find spares. This dogged determination to keep the bikes running brought my brother and me closer to a few friends from the neighbourhood. Yorik D’abreo was also riding his dad’s bike while Vikas Dave and his brother Vishal were gifted a Jawa we all affectionately called ‘The Goldie’ by their uncle. Goldie was fitted with a Keihin carburettor which would continue to run perfectly even when the idle and air screw was taken completely off and the bike had some weird exhausts that came of something that we have yet to identify. Both bikes continue to be well cared for and are ridden regularly. In fact, the Dave brothers now own an impressive nine Jawas between the two of them.

We formed a small group called ‘Clan Jawa’ and short rides around Bombay ensued. Soon, I was severely smitten by the touring bug and the paucity of Jawa spares was glaring. Riding the bike long and hard required a growing supply of hard to find spares and that is when I decided to buy an old Royal Enfield Bullet 350 instead with a partial loan from my father.

The Jawa was by now the bike for the leisurely rides while the Bullet was the daily workhorse. When I worked with Mahindra Two Wheelers for a brief period of time, I would ride the Jawa to office on some Fridays because of the relatively less traffic at the end of the week. The sweet smelling blue exhaust smoke from the old two stroke did crinkle up more than a few noses in the rather sedate office parking lot, but in a remarkable twist, it is Mr. Anand Mahindra himself, along with a seemingly capable and enthusiastic team, who is getting this very same marque back to life! Who would have known!

Our Jawa’s twelve horses have grown old and don’t feel as sprightly as they used to. But they do arise from their slumber after tickling the Jikov carburettor five times, a couple of pumps and then one strong kick on the lever.

This 353 will always have a home here with us. However, the world outside has changed and the highways have gotten faster. The Bullet too feels slow now, its sedate 70 kph cruising speed makes it one of the slowest vehicles around. The need for a more powerful touring bike is real. Something comfortable and honest with a great build quality that will make it last for a long time to come. Something promising like the new Jawa, perhaps?

Will history repeat itself once again? Will this young(ish) man write a similar story to what his father and a motorcycle penned down more than fifty years ago? I definitely think so, judging from the way how warm I felt when I saw the reveal of the new Jawa engine. From the looks of things, the fire still burns within!