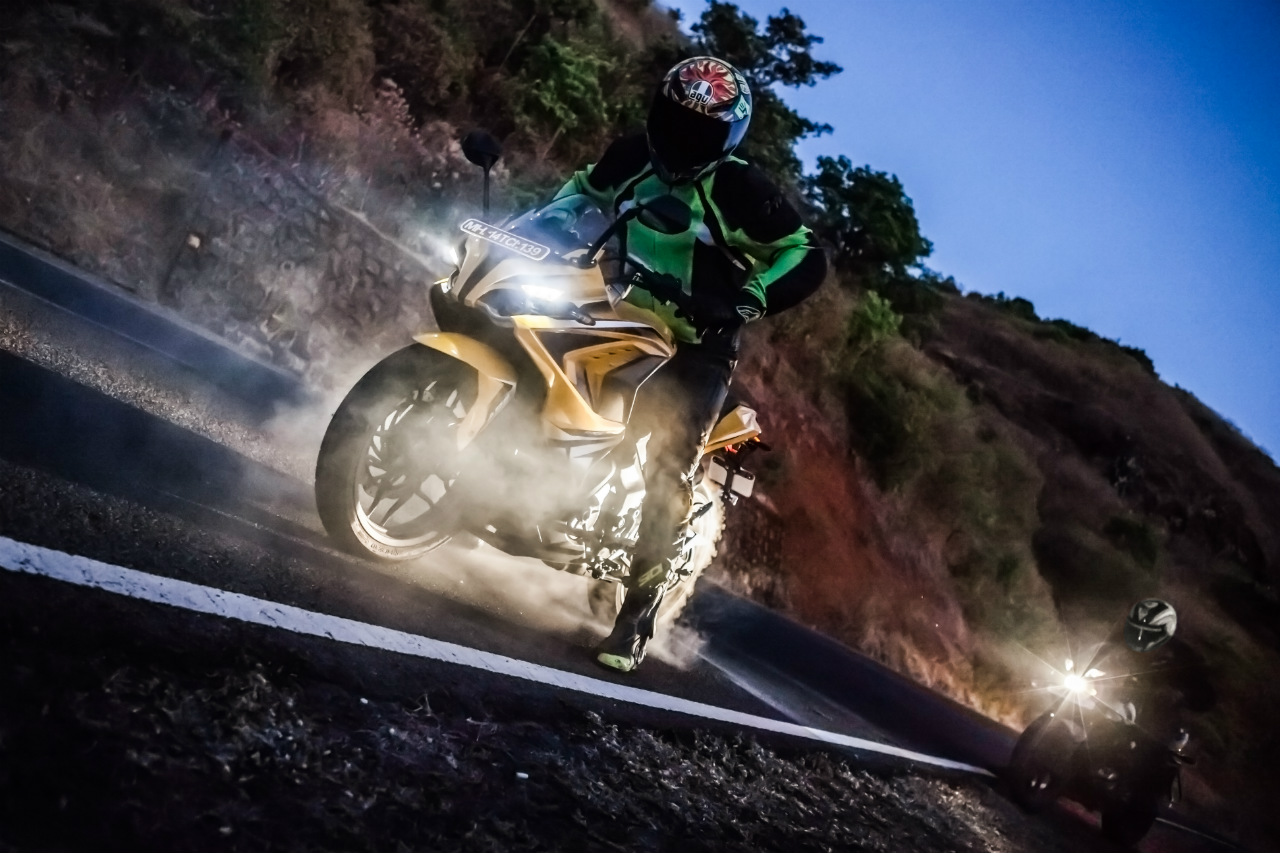 Hello, there! Recognise me? By now, I’m pretty sure you know who I am. Nonetheless, allow me to introduce myself – I am Bajaj’s fastest Pulsar yet, the RS 200. And naturally, I’m a big deal. However, I think they forgot about my predecessor who was billed ‘the fastest Indian’, the Pulsar 220 F, who was clearly the faster one with its 144.3-kph top speed, while I can manage 140.8 kph. Was that bike not a Pulsar, or am I not an Indian? It’s all very confusing. Moreover, Bajaj’s advertising brochures want me to be the bike that ‘leaves track racing to the amateurs’. Don’t know what to make of that, either.

I think Bajaj has been trying to lay the older Pulsars to rest for a while now, but they’re extremely popular motorcycles even though we, myself and my bare-it-all sibling, the 200 NS, are clearly better and offer a lot more value in terms of technology and features… say, do you feel like someone’s watching me all the time? I could swear I just saw… anyway, never mind. I must be seeing things.

Speaking of seeing, I’m sure you agree that I get noticed wherever I go. A lot of people don’t like the lower half of my full fairing, saying that it looks too busy. But Bajaj says it’s for aerodynamic purposes, so no one can really say anything. But people do have a bone to pick with the excess of lines on my bodywork. ‘It’s striking in a messy sort of way,’ they say. Well, I’ll leave it to you to decide what to make of the way I look. The older Pulsar, though dated, still looks handsome with its quarter fairing and spot-on proportions. I don’t know if I will age that well. Extreme designs rarely do.

However, I will say that my face, with the twin headlamps, does look pretty nice. And no matter what Bajaj says about keeping away from European influences, people do look at me and say I look like the lovechild of an Aprilia and a Buell. I’m flattered, I really am. But what I cannot escape wherever I go is the way people react to my tail-lamp. I am sorry it’s not better, but there’s nothing I can do about it except hope that merciful owners will hack the tumour-lamp right off. It’s a pity because all the people I overtake will notice the worst part of my design. Oh yes, I will overtake a lot of people, believe me. Say… there’s that chill going down my perimeter spine again. Are you sure I’m not being followed?

Anyway, even though I might be 20.5cc down on the older bike and am marginally less torquier, my KTM-derived, liquid-cooled, four-valve, triple-spark-plug motor makes around 3.4 bhp more. Also, I make around 0.9 bhp more than the 200 NS, which I make good use of via shorter overall gearing than non-faired sibling. That extra power is likely due to the new fuel injection system, revised air-box and exhaust systems, among other changes. It also explains why I’m utterly refined throughout my rev range. But… I also weigh 15 kg more than the older bike… I don’t know what to say, really.

But let me hasten to add that you don’t really feel any of that weight on the move. As usual, Bajaj has done a great job of making me as neutral and well-balanced as possible. However, if someone tells you that I’ve got my trail angle reduced by one degree to improve handling, don’t listen to them. It was likely reduced by way of casting a new triple clamp section to make sure my front end fitted inside the fairing. It’s probably why I exhibit a bit of understeer coming out of a corner on a racetrack. But trust me, all is fine on the road. Tracks are for amateurs, right? People really say all kinds of things.

Trust me when I say that you’ll have a good time riding me. My riding position is sporty-but-sensible, so you won’t kill your back or wrists. People say that I sound great once past the 6000-rpm mark, and I must admit it’s true. Thanks to the shorter gearing, my 6-speed ‘box does tend to feel like a 5-speed one, but it’s not something that you’ll complain about. Instead, combined with the lovely exhaust sound and the instant throttle response, you’ll have a whale of a time on a fun road. And on highway stretches, I’ll sit at an indicated 120-130 kph all day long. Indeed, many people say that I’m already one of the best highway machines in the country. Never mind that you’d have to be built like a flatworm to crouch behind my rather low screen to escape windblast.

Handling, I’d like to remind you, isn’t razor-sharp, but it’s confident enough to throw me around any way you please. Especially since my front brake, with its optional single-channel ABS, is an excellent anchor to have on your side. It’s sharp and powerful, and easily one of the best things about me. And power, well, I can be quicker and faster than pretty much anything on the road. Overall, if I’m to thump my own faired chest a bit, I really do think I’m a great bike, and I think so does the chap riding me. If you can get used to the way I look, that is.

Bajaj has ensured that I’m a logical progression of the type of sporty bikes it makes – comfortable, fast and fun. In that sense, being the flagship Pulsar for now, I inherit the 220 F’s mantle, even though the newer quarter-faired AS 200 might be a more apt successor to our predecessor. In any case, as it stands, I’m better engineered and I feel fresh compared to the 220 F which, despite its popularity, is now feeling a bit long in the tooth. But now I must be going. It’s getting late and frankly, I’m getting a bit spooked. Why do I constantly feel like I’m being watched closely?