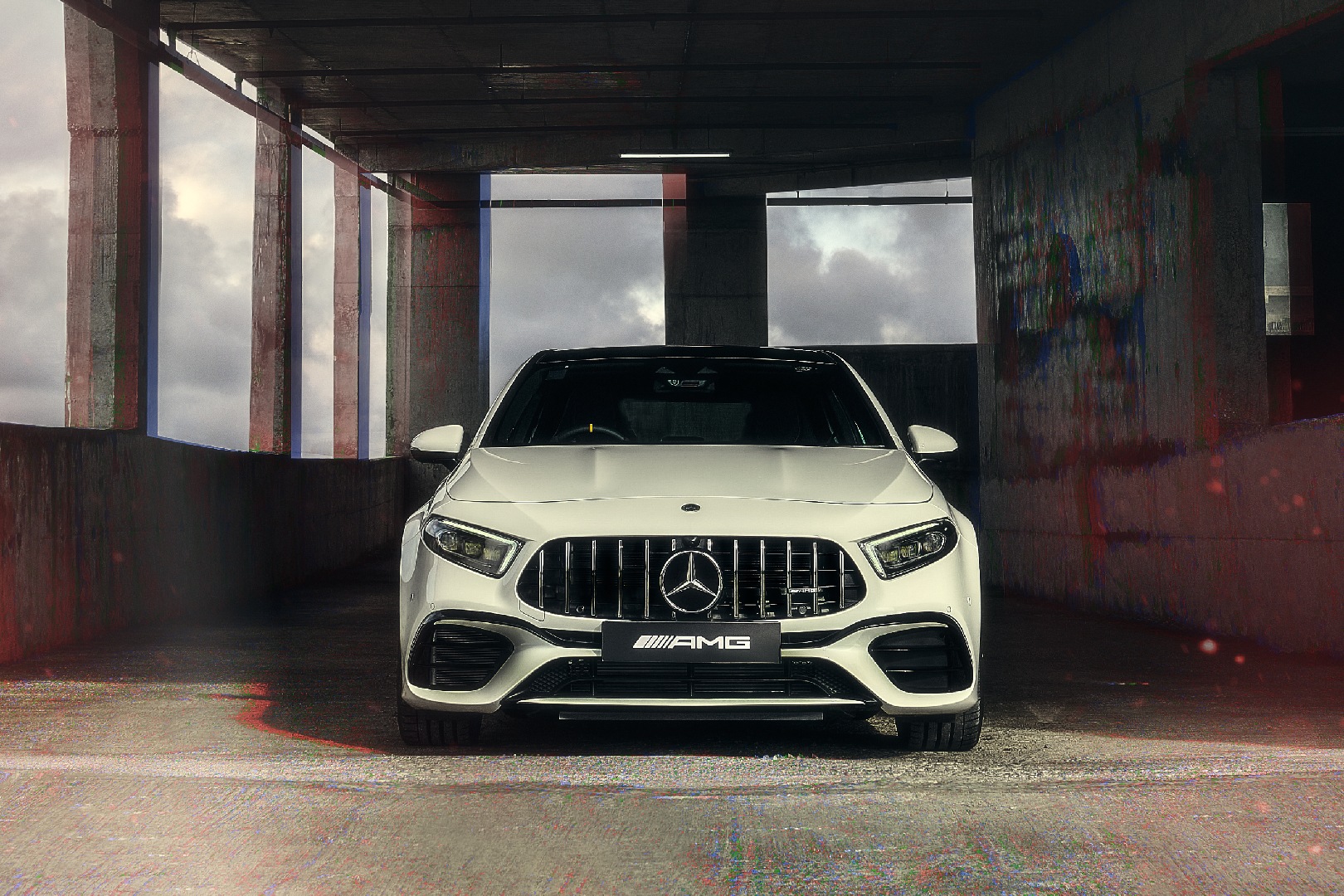 How about clocking your highest average speed of any driving session in your life? Well, I can tell you that you’ll need a suitable car and a suitable track as well. And as far as combinations go, the high-speed track (HST) at the National Automotive Test Tracks (NATRAX) near Indore and the Mercedes-AMG A 45 S were the perfect high-performance parts with which to make a speedy sum. The HST is an 11.30-km oval, the longest in Asia and the fifth-longest in the world. And the A 45 S has the most powerful production inline-four engine in the world. Quite a day for superlatives, then, as with all things AMG!

Now, I don’t know about you, but an open loop of tarmac is as forbidding as it is inviting. After all, there’s nothing like unrestricted speed to make the mind go, ‘I wonder what state the tyres are in’ and ‘How do I take that banked last lane in the bowl?’ It was my first time in a car on such a loop and I preferred that I kept things away from the barriers. At least the A 45 S looked right at home in that high-speed environment with its aggressive grille and bumper, 19-inch wheels wrapped in low-profile tyres, and quad exhaust pipes. I remember noticing the interior and liking it, too, but that memory was wiped clean by the tunnel vision that followed. 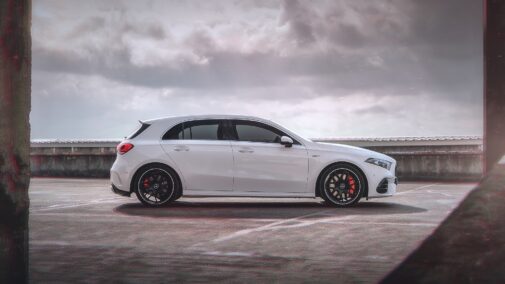 Most of that day’s story was written less by me and more by the 1991cc inline-four force fed by a twin-scroll turbo. It makes a fantastic 421 bhp and 51 kgm, which are obviously epic numbers for a hatchback, and they enable 0-100 kph in 3.9 seconds and an electronically-limited top speed of 270 kph. Again, in a hatchback! Obviously, since AMG has had a go at it, the A 45 S gets all the bleeding-edge tech it needs to keep going where it needs to. It has 4MATIC+ with AMG Torque Control which can send power individually to the rear wheels when required. I imagine that comes in very handy in the standard Drift mode, and I very much would’ve loved to try it out, but there was no time or place for that wish to come true. Pity, since the skid pad was close by and completely empty.

Instead, I found myself donning a balaclava and a helmet, and strapping myself into the sporty driver’s seat of the A 45 S. We were to follow a professional racer in a lead car, two journalists in two separate A 45s, and I quietly congratulated myself for unintentionally getting into the last car. That way, I could hang back and drive as I wanted. Or so I thought. On the way out of pit lane, I selected the sportiest mode possible for maximum involvement and also pressed the loud button for the exhausts. Once on the track proper, the lead car floored it and the car behind him followed suit, and I aped the procedure after a few moments. In what seemed like no time, I was reading ‘278’ on the speed display, though there wasn’t really a sense of occasion given the lack of reference on the wide track. And then the bowl came charging at me.

At that moment, I realised that while I didn’t break into a sweat at the A 45’s top speed down the straight, my palms decided to release all the built-up sweat as I approached the parabolic curve in the top lane. I let off the throttle because at that speed the barrier seemed as close as my skin, and entered the curve at 215 kph, thanking the A 45’s steering wheel that was wrapped in some sort of absorbent material. I bet it was dripping for days after. Anyway, once into the curve, I realised that the banking was severe enough to keep the car glued to the road and I could’ve gone way faster into it. Even the car seemed to smirk as I floored it again to catch up with the cars in front who had now disappeared into the distance. I didn’t catch them, of course, but it was just as well. Now I really did have the track to myself.

On the oval’s other straight, I once again found myself reading 278 kph well before the end, and I had the time to notice how planted the A 45 S felt. For a hatchback to display such poise was truly remarkable, and it took little by way of inputs to make the A 45 S go where I wanted it to. Of course, I didn’t try any rapid top-speed multiple-lane lunges, but switching from one lane to the next took just a gentle nudge. I also observed that the engine and exhaust sounds were decidedly inline-four in nature, which might seem foolishly obvious, but I somehow expected a bit more drama from those rather fetching pipes. I suppose this thing still has to be road legal, and I bet it won’t take much to make those pipes as loud as they deserve to be.

Before long, I was through the transition curve and down the straight to the parabola again. This time, I decided to brave it out on the entry, but found myself in the third lane while approaching the banking. Having made a total hash of it, I entered the curve at 230 kph and loudly berated myself while simultaneously realising there was a walkie-talkie in the car. But I had no reason to worry about the other overhearing my colourful self-directed rant because they were well out of range by now. That was when the scale of the place truly hit me. And then another strange thing happened.

Sat in the banked lane, I couldn’t decide which way to angle my head. Was I to stay in line with the car? Or angle my noggin the way I do on a bike? Both positions felt equally weird, though, and I concentrated on making the fastest possible exit out of the curve. This time, I could feel the banking push the car into the road, even as I watched the lane markings vanish into the curved horizon in the distance. It was a most surreal experience, the A 45 S on the outer edge of what seemed like a massive curved LP record, singing its song of speed from the heart, and my eyes fixed on the point where the grooves converged into a single point. Or at least I think they did, since my head was never at the right angle to verify that. 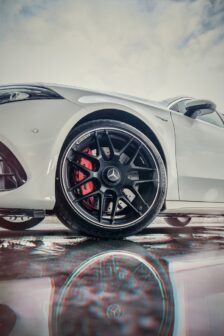 Back on the straight, it was already time to get bored of seeing 278 kph again. What do you know, I’m just as jaded as the next guy. But I kept it floored lest I face the embarrassment of the guys ahead suddenly showing up in my rearview mirror. What do you know, I’m just as petty as the next guy, too. This time around, I stuck to the last lane and decided to go all in. And then lifted off the throttle at the last moment because I realised that this was the first time I was actually taking the banking in the right way, and that it probably wasn’t prudent to go barging in at top speed.

And so, my entry speed into the parabola on the final lap was still a pleasing 250 kph; one or two more laps, and I could’ve gone through it without lifting off. At least that’s what I liked to think out loud later when amongst company. The A 45 S certainly could if I had the will, though. Rounding the transition for the last time, I saw the cars ahead had slowed down for me to catch up. Since the place played havoc with perspective, it was a while before I observed that their rear ends were coming up rather rapidly and I thus had the chance to finally appreciate the A 45’s formidable brakes. I reminded myself to calculate the approximate average speed as soon as I got out of the car, but I found that my hands were trembling themselves into a blur. And I could only look at the A 45 S and say, ‘Thank you.’ It looks the business and does the business, too. What a day! 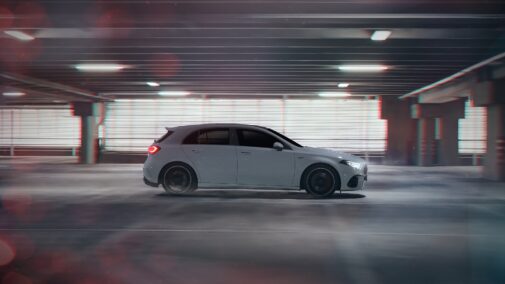