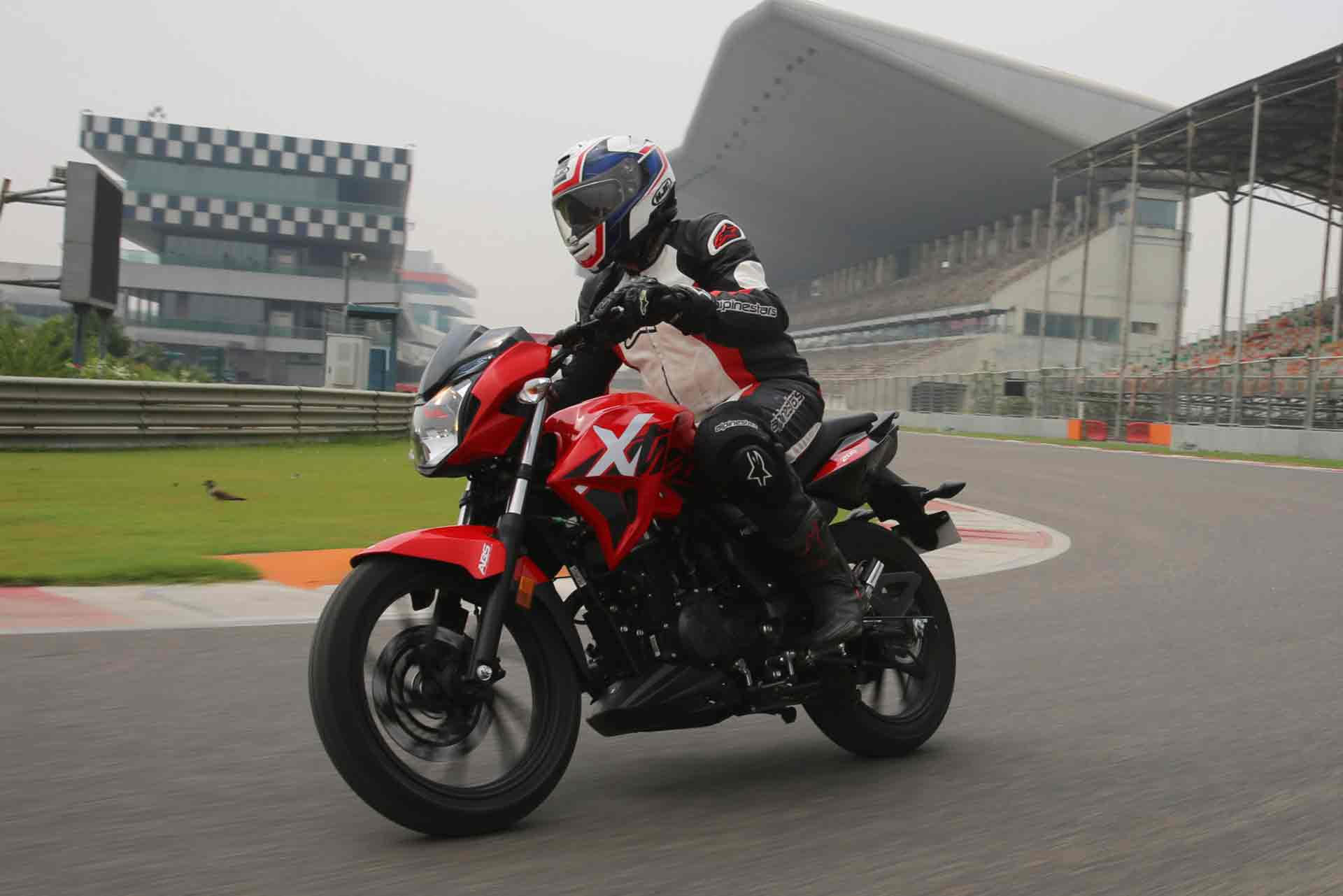 There’s been drastic improvements to the motorcycling scene in India in the last few years. Customers are getting more demanding, and manufacturers are keeping a keen ear out for what it really is that they want. Motorcycle manufacturing behemoth, Hero Motocorp, has captured the mass commuter segment’s attention quite successfully and have now decided to move on to bigger fish, bigger commuter fish that is; nothing too obtuse.

Enter the Hero Xtreme 200R, a motorcycle that you’ll find oddly familiar, and for good reason. The Xtreme Sports has been around for a while now with its 149cc motor. But things are heating up in the 150-160cc segment, so Hero’s decided to take a swing at the 200cc premium commuter segment, where competition is stiff but options are few. So what does the Xtreme 200R plan to do, then? Could it really shake up the segment with its sporty intent, or does it still abide by Hero’s safe and steady formula? 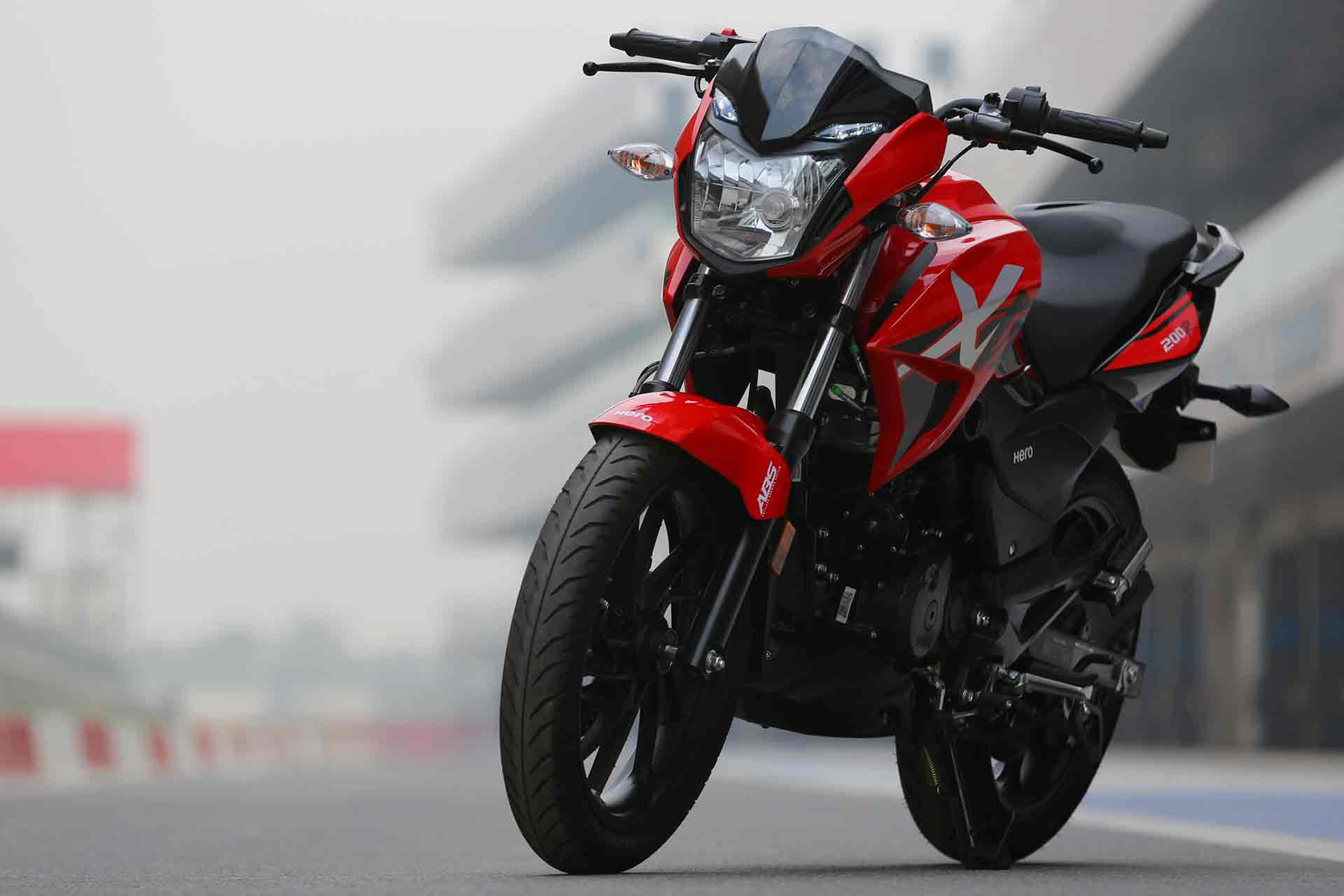 Well firstly, aside from the engine, the Xtreme 200R is an all new bike. From the chassis, to the brakes, to the suspension, Hero has put in the hours and taken the leap. We got to test the bikes on the race track. And not just any race track, Buddh International Circuit. While it’s great that Hero Motorcorp gave us the bikes to test here, it seemed like a bit of overkill, until we learned that we’d be riding on a shorter loop that involved more curves than ridiculously long straights.

Okay so let’s get to it; the core of the bike is what we’ll explore first, the engine. This 199.6cc motor is a bored out, reworked version of the Achiever 150 that’s intended to satisfy the torque lust that’s now emerging as the number of stop lights grow. It delivers a healthy 18bhp at 8,000rpm while torque output is a respectable 1.74kgm produced at 6,500rpm. The engine keeps things simple with 2 valves, a carburettor and an air cooled format. 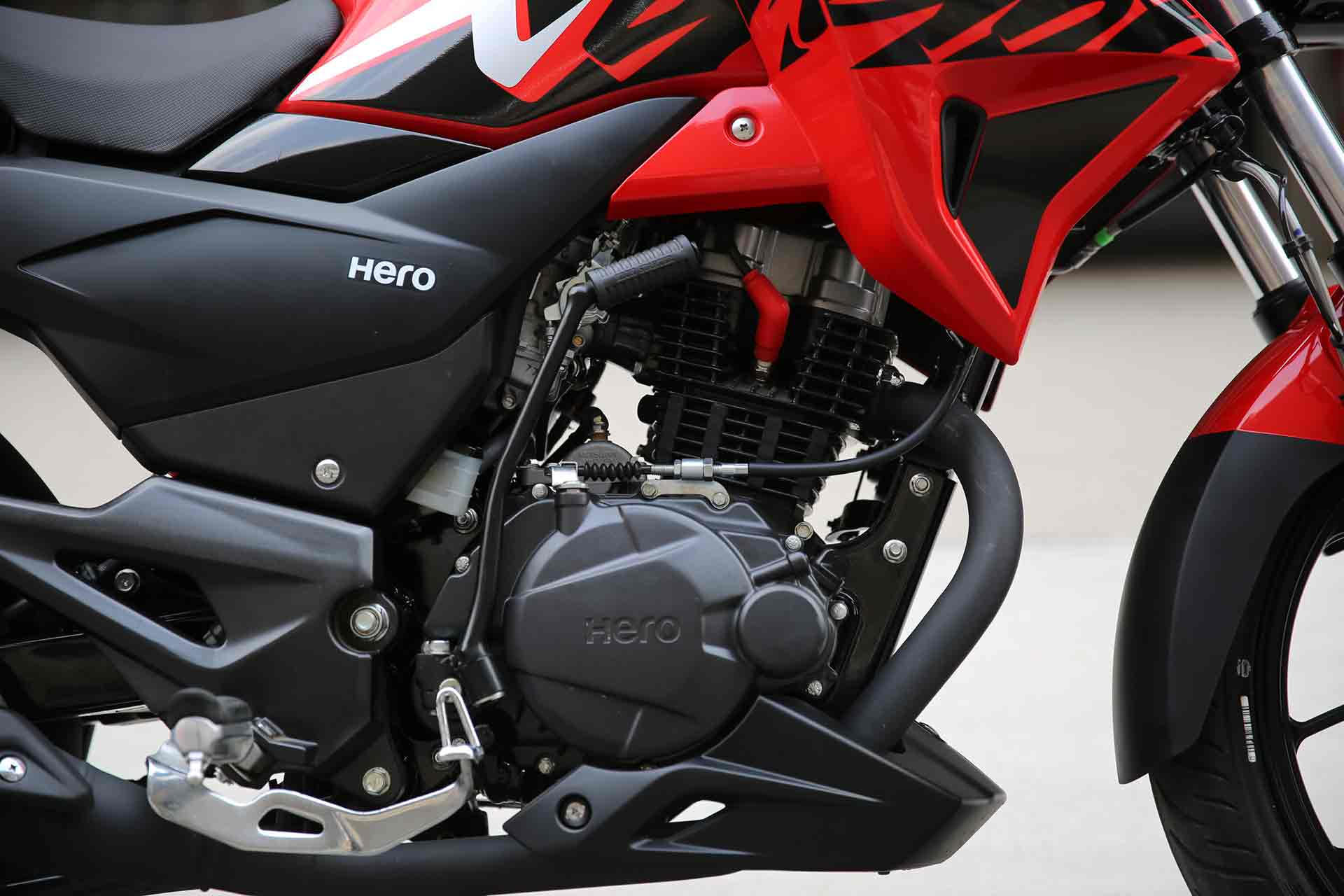 While we did test this bike on the race track and out here you spend most of your time in the upper portion of the revs, it must be said that this motor is pleasantly responsive even in the low and mid range. It’s calm, composed and doesn’t produce too many vibrations, which should make it quite a decent city bike while still adding a bit of zing to your commute. Out on the race track, however, speeds hovered between the 85-110kph mark. Now while this may not sound like much, the straights we had at our disposal weren’t long enough to go any faster (and that’s also taking into account my portly self aboard).

In the real world, we’d expect the bike to be adequately quick on the street for a 200cc without really getting your jaw dropping. A specification sheet between the TVS Apache RTR 200 4v, the Bajaj Pulsar NS200 and the Hero Xtreme 200R, would reveal that the Xtreme is at a bit of a disadvantage when it comes to numbers. But numbers don’t always draw up the correct picture, do they. It finally boils down to the manner in which these parts and designs come together to perform the task at hand. 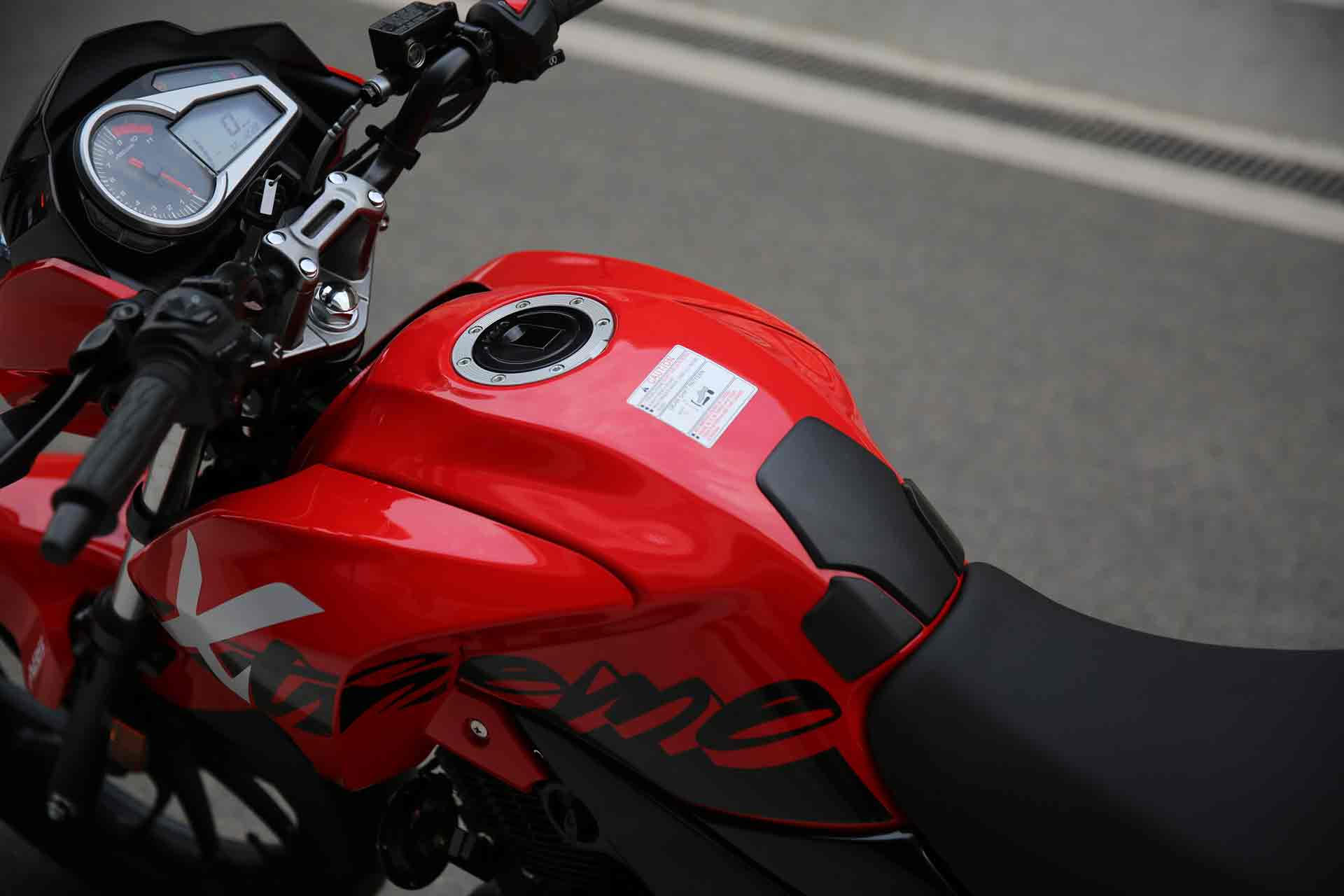 While the Xtreme 200R hasn’t really got the aggression to keep you on your toes, it’s got a certain composure that will grant you the confidence to really find its limit. The 37mm forks up front and the monoshock at the rear come together in lovely unison with the chassis to provide you with a pleasant ride experience. The setup feels plush and planted at the same time. While this did translate to a whole lot of footpeg scraping on the track, in the real world it should really bring out the bike’s ability to hold a healthy pace over our shoddy roads.

Some of the bike’s composure is also attributed to its tyres. The MRF Nylogrip Zapper FYM front and REVZ-S rear tyre have ample grip at the center and at the edges; restricted at the track again, only by the peg clearance. And for those panic situations, the brakes work really well too. The 276mm disc at the front and 220mm one at the rear do a lovely job of keeping the braking very predictable and strong. Single channel ABS will chime in as a safety measure for India; on export models it will be optional. 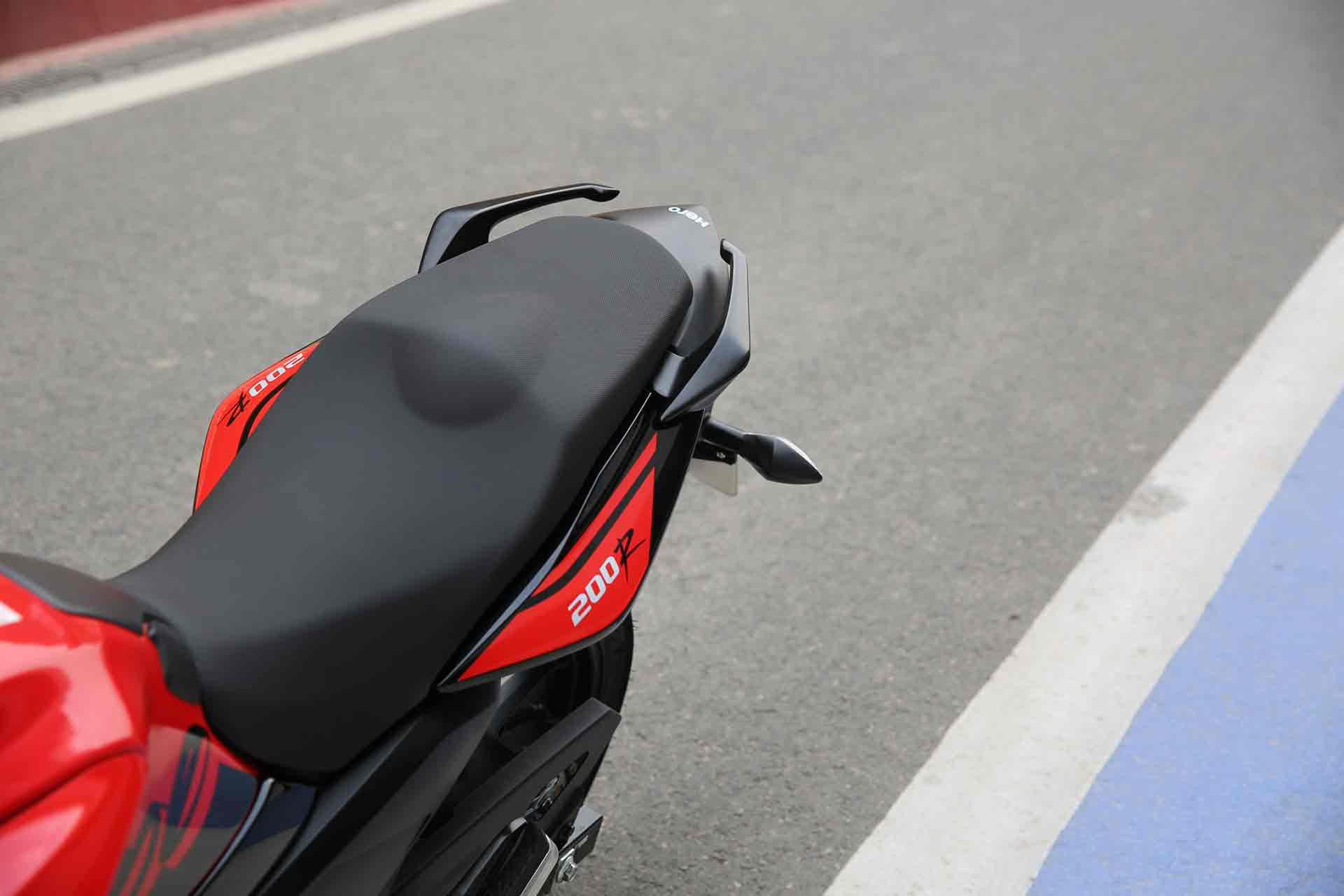 Then there’s the seating position on the bike; it’s on the relaxed side. This neutral posture will not only keep things comfortable on longer rides, but it also gives you more space to move around. The Xtreme 200R doesn’t feel as compact and aggressive as the NS200 or RTR 200. The seat is nice and plush, although it misses out on the split seat that’s available on the smaller Xtreme Sports. And while on board, the speedometer is a fairly simple one. It’s got an analogue clock for the tachometer and a digital screen for the speed, fuel and other info. The bike has stuck with a conventional design philosophy and looks like an enhanced, beefier version of its younger sibling; which keeps its identity quite strong.

What’s clear is that way this bike has come together, it will appeal to a more mature mindset. This is a well balanced and well thought out motorcycle that isn’t going to keep you at the edge of your seat, the way the younger ones like it. Here’s a bike that will do well on city streets and keep things interesting if adrenaline comes knocking. The bike’s expected to launch sometime in June, and we don’t expect it to have any outrageous pricing thanks to its simplistic and functional approach. What we do expect is for the bike to be a pretty adept city motorcycle. The comfy ergos, flexible engine and composed ride, give the Xtreme 200R all the ingredients to make us really want to get a slice of this pie out on the streets.